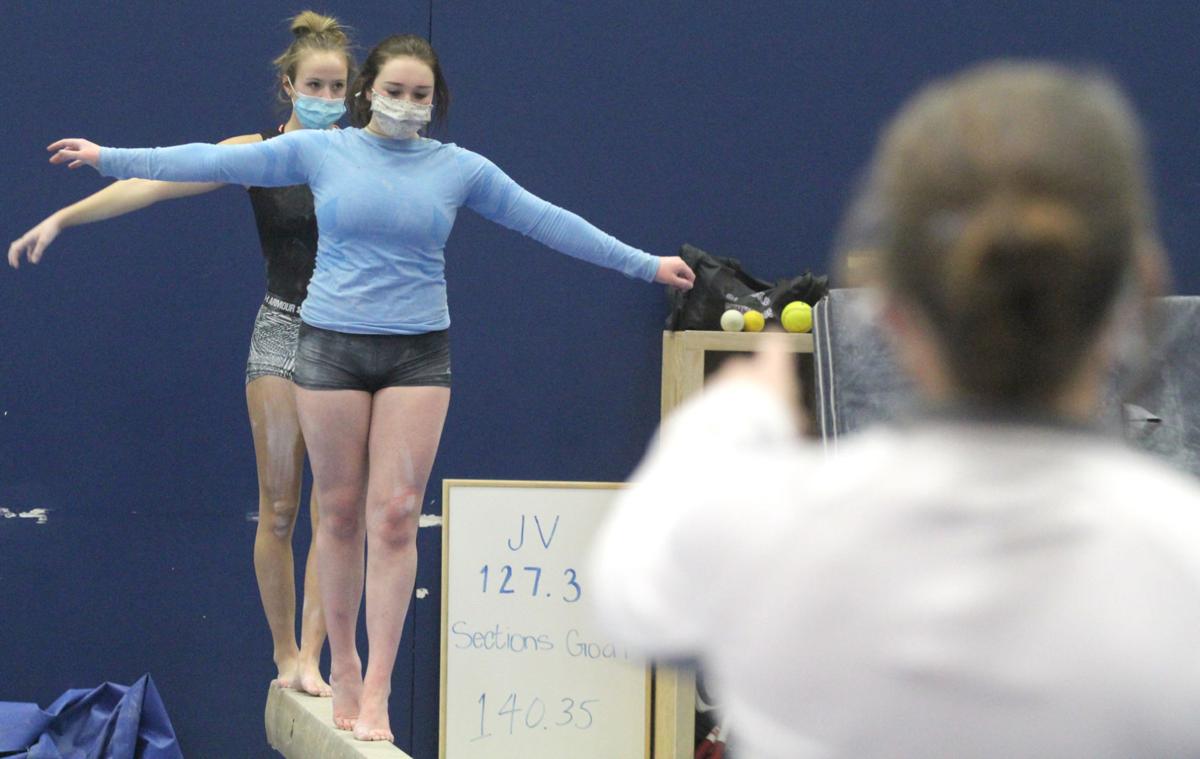 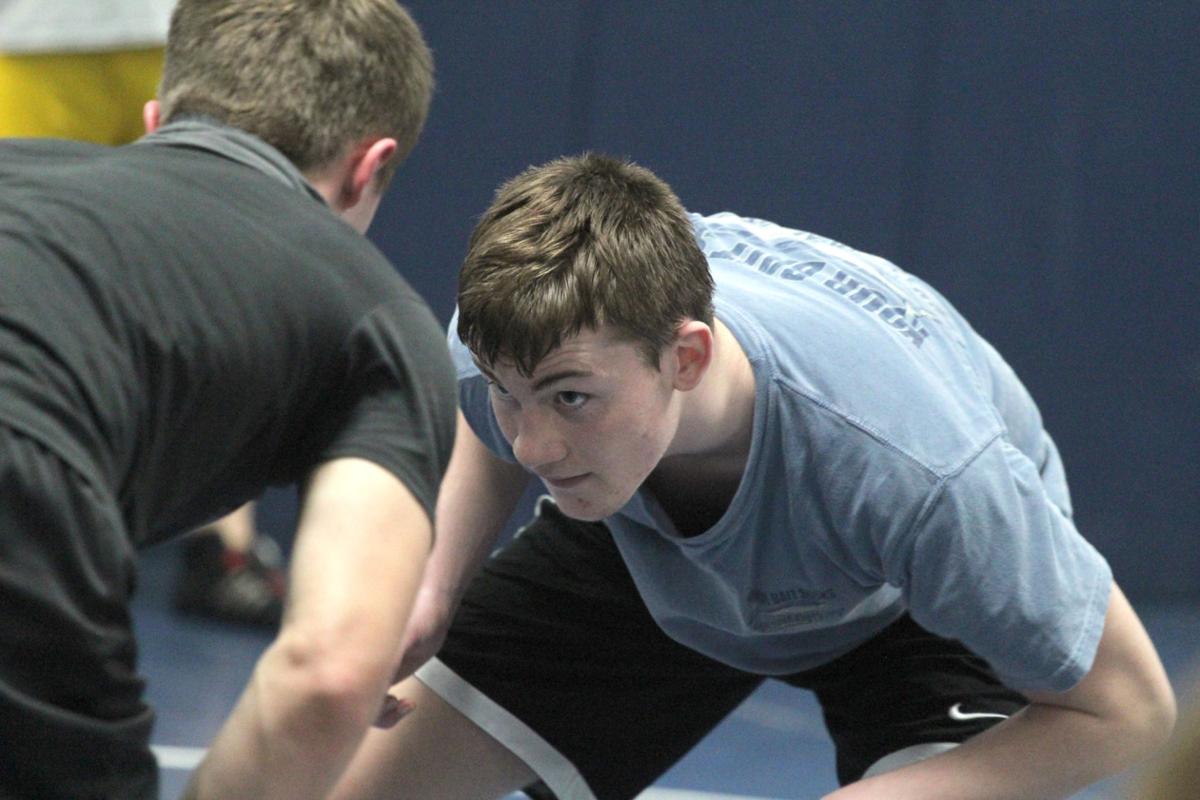 Chaska/Chanhassen senior Aiden Brkovich works with fellow captain Grant Sussner in the first wrestling practice Jan. 4 at Chanhassen High School. Masks are worn by all in the wrestling room with an exception on 1-on-1 drilling with the same teammate. Masks will also not be required during dual matches. 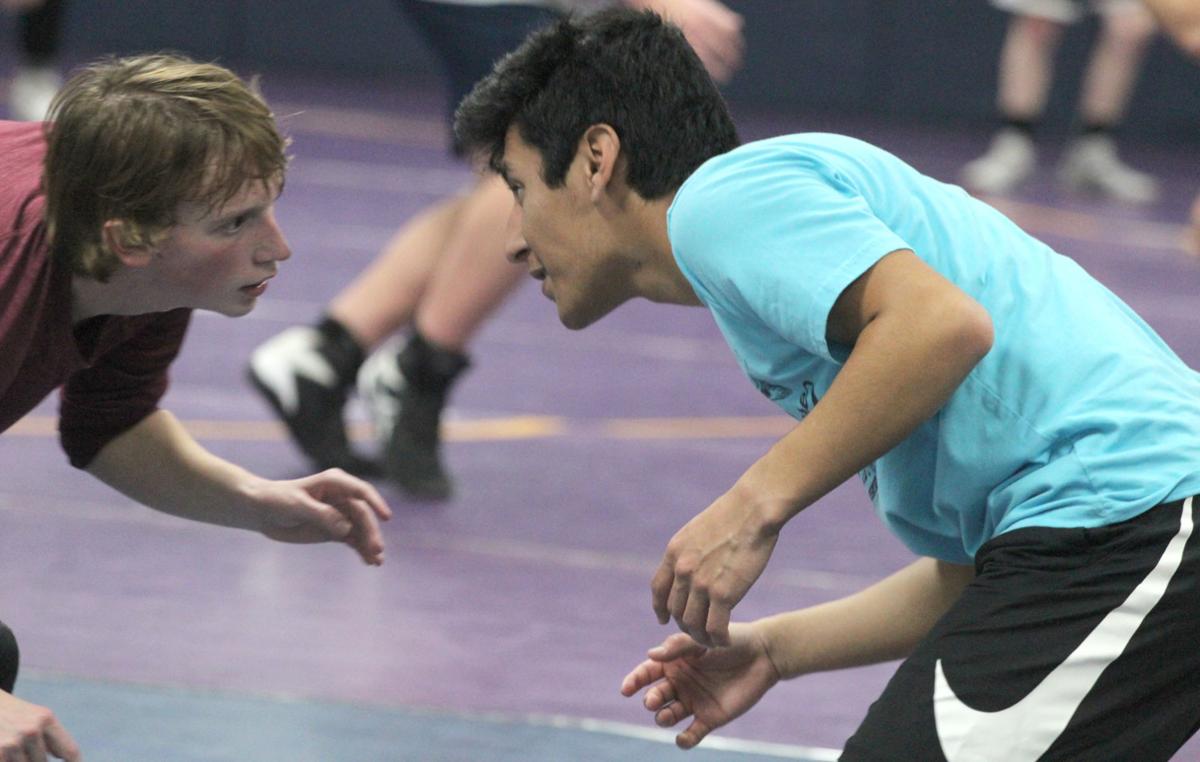 Dylan Austad and Aaron Smith drill on the first day of practice Jan. 4 for the Chaska/Chanhassen wrestling team. Like in matches, 1-on-1 training is the only time masks can be taken off in the wrestling room. 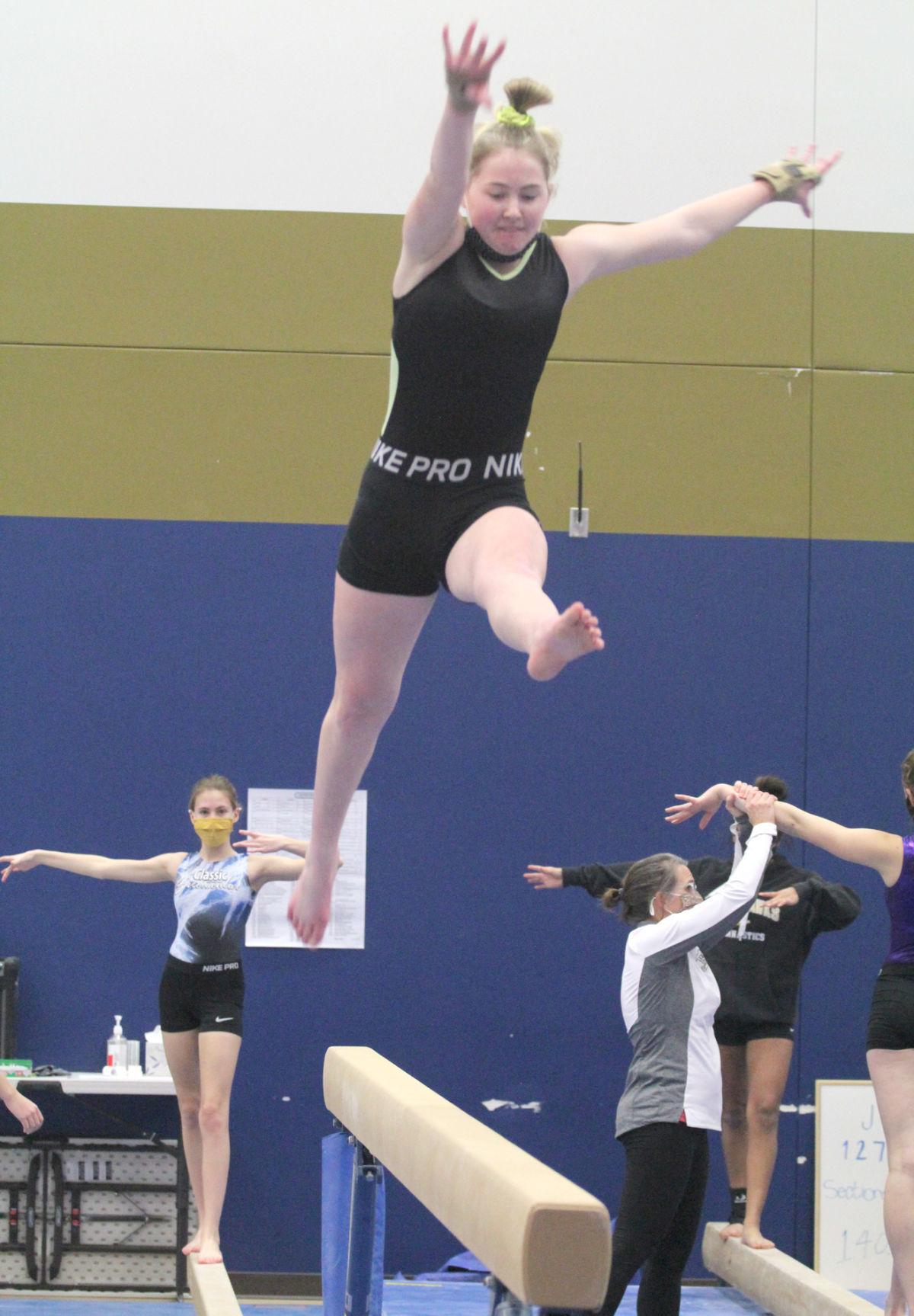 Chaska/Chanhassen gymnast Gabby Krull and teammates were back in the gym on Jan. 4 after a four-week pause. For some, it was like old times. For others, it was slowly coming back to them.

Chaska/Chanhassen senior Aiden Brkovich works with fellow captain Grant Sussner in the first wrestling practice Jan. 4 at Chanhassen High School. Masks are worn by all in the wrestling room with an exception on 1-on-1 drilling with the same teammate. Masks will also not be required during dual matches.

Dylan Austad and Aaron Smith drill on the first day of practice Jan. 4 for the Chaska/Chanhassen wrestling team. Like in matches, 1-on-1 training is the only time masks can be taken off in the wrestling room.

Chaska/Chanhassen gymnast Gabby Krull and teammates were back in the gym on Jan. 4 after a four-week pause. For some, it was like old times. For others, it was slowly coming back to them.

Around and around athletes circled the wrestling room at Chanhassen High School at varying speeds. A return to play Jan. 4 was met with a number of conditioning drills, one that pushed participants both physically and mentally.

"We're two months behind," said Storm Hawks assistant wrestling coach Cabe Miller. The normal start date for wrestling is usually in November. The original plan for 2020-21 was Nov. 30, but a second shutdown moved the date back farther.

And with a return to play came new restrictions, including a wearing of a mask. With the exception of 1-on-1 drills with the same teammate, all in the wrestling room, athletes, coaches and student managers, must have a mask on, even during conditioning.

Welcome to Day One of practice for 2021 winter sports. A lot to learn in 10 days. A lot to get athletes up to speed with as well.

"It feels good being back," said Brkovich after working 1-on-1s with two of Chaska/Chanhassen's top wrestlers in Grant Sussner and PJ Velazquez in a 2-hour practice. "I've been sitting at home all day too much. I'd rather be here than sitting at my desk."

Besides dance, no other winter sport started before the latest shutdown. That meant December virtual workouts were voluntarily.

While basketball teams worked on dribbling in garages and driveways, other sports such as gymnastics were limited in what they could accomplish at home.

"About the only thing they could do were handstands," Chaska/Chanhassen head gymnastics coach Chris Lacy said.

The gymnastics gym has been setup since November. It felt like old times, with a new tumble track, though, for an experienced @StormHawksGymn team today pic.twitter.com/6hPBfz8kCh

A year ago, the first few practices were about getting to know each other -- Lacy returning to coaching after a decade-long hiatus -- as well as figuring out how many mats, how many beams, etc., the program had.

The gymnastics space was set up by mid-November, including a new Tumbl Trak, a new landing mat for vault, and fitness equipment to be used during practice.

The gym sat quiet, though, for more than six weeks. Gymnasts took the time to work virtually twice a week on conditioning with strength coach Barret Panning, but being back on the beam, swinging on the uneven bars, was a welcome feeling.

"I'm very excited to see what this group can do together," senior gymnast Claire Guthmueller said. She, along with Lacy, are also excited to have a new assistant coach in Pat Keran, who has trained with many of the team members at Classic Gymnastics in Chanhassen.

"I really feel like the coaches are working hard to improve our training. It feels a lot more scheduled. We have a plan for what the season will look like," Guthmueller said.

Youth sports, including high school athletics, were given the green light Dec. 28 to begin practices on Jan. 4. Games and scrimmages can resume on Jan. 14, per Minnesota Department of Health guidelines.

Face coverings will be required for athletes competing except in wrestling, swimming and diving, gymnastics and cheerleading, for fear of them becoming a choking hazard.

It was the first day in the gym for @ChanStormHoops and new head coach Corey Christopherson. A lot of high compete guys return for the Storm pic.twitter.com/SyCYKqsxf7

Masks were worn in most activity during opening practices by wrestlers and gymnasts.

In gymnasiums and hockey arenas, masks must be worn at all times, something many schools in Western Wisconsin have already been doing in many sports since the start of the school year.

At this point, no spectators will be allowed for first high school contests next week, though that was the direction right up until the first day of volleyball competitions in October.

(NOTE: on Jan. 6, Gov. Tim Walz is expected to announce that up to 150 spectators will be allowed for indoor events; and up to 250 spectators for outdoor events).

Athletes are grouped into pods of 25 as well.

"These experiences are so important to students and they have been anxiously waiting to get these winter seasons started," MSHSL Executive Director Erich Martens said. "By implementing these safety protocols recommended by the American Academy of Pediatrics and required by the Minnesota Department of Health, we have the best chance to provide safe seasons with reduced interruptions and also plan for full postseason experiences."

The MSHSL continues to work directly with the MDH and the Minnesota Department of Education in developing plans for student-athletes to return safely to in-person participation.

"We are excited for the opportunity to start both practices and contests in this winter season," Martens said. "The commitment to safety by our more than 500 member schools is critical to not only start our seasons, but to finish them as well."

The first practice is always the hardest, Brkovich said. While he was able to train a bit with a wrestling mat in his basement, and was able to condition outdoors, the senior captain admitted, like for many, the first day was a grind.

"Most of the time it was work on your own, do what you could do. But nothing replaces what we do in that room," he said. "Every first day is tough, but just the longer gap between seasons, it certainly made in even harder to get through."

The first day of practice is always hard, @StormHawksWrest senior Aiden Brkovich said. Even after the conditioning and planking, the captain said it sure beating sitting on the couch pic.twitter.com/QWKyAtH7MA

Guthmueller, a diver for Chanhassen in the fall, was last in a gymnastics room in the 2019-20 high school season. Coming off a broken ankle last season, she let her body heal.

"It's coming back slowly," Guthmueller said during the first practice. "All we really could do was keep up our conditioning to keep our strength up."

Preparing for the season ahead, one that most certainly will have its obstacles, coaching staffs and athletes must have a Plan A, a Plan B and beyond.

"Really, it's about giving 110 percent, no quitting, giving it your all, all the time. It's tough, but worth it," Brkovich said.

70%: number of contests to be played