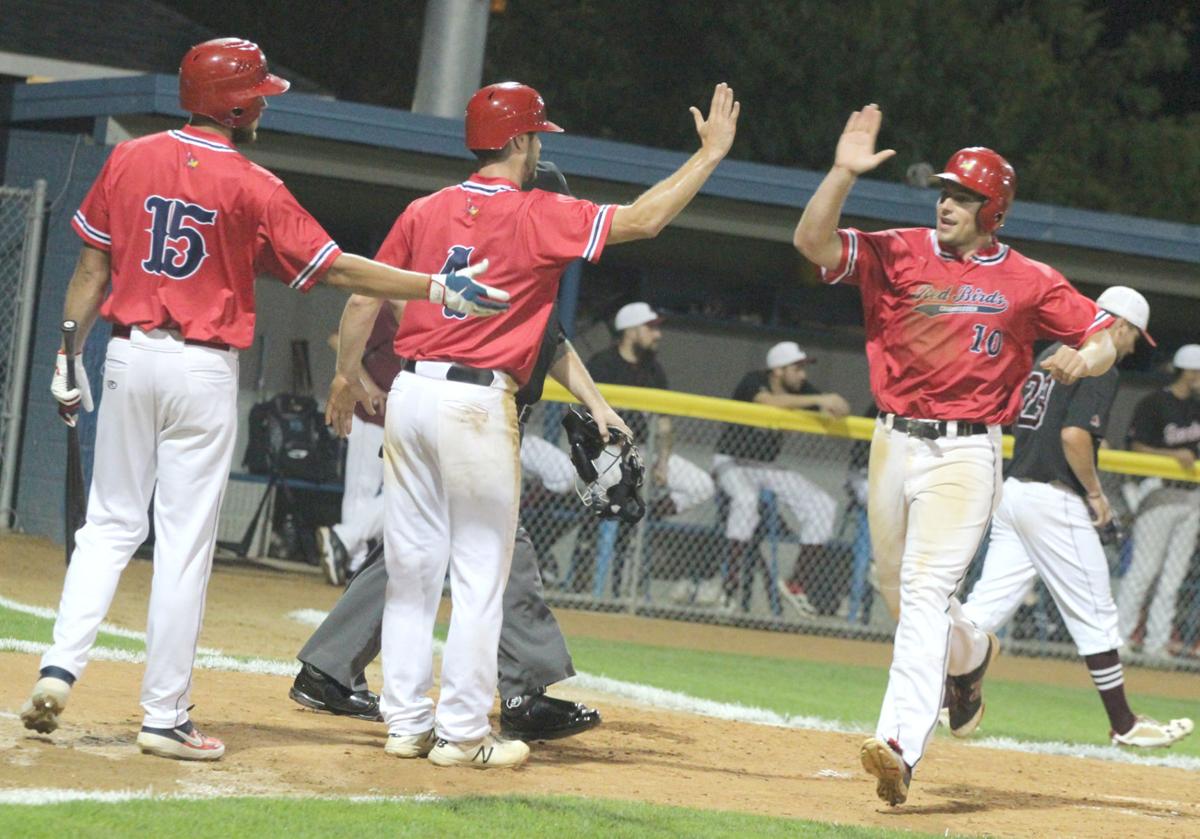 Jackson Goplen is greeted by Chanhassen teammates Michael Jurgella and Ryan Diers after a two-run double from Aaron Kloppner gave the Red Birds a 6-0 lead Aug. 21 in the Class B State Amateur Baseball Tournament opener. 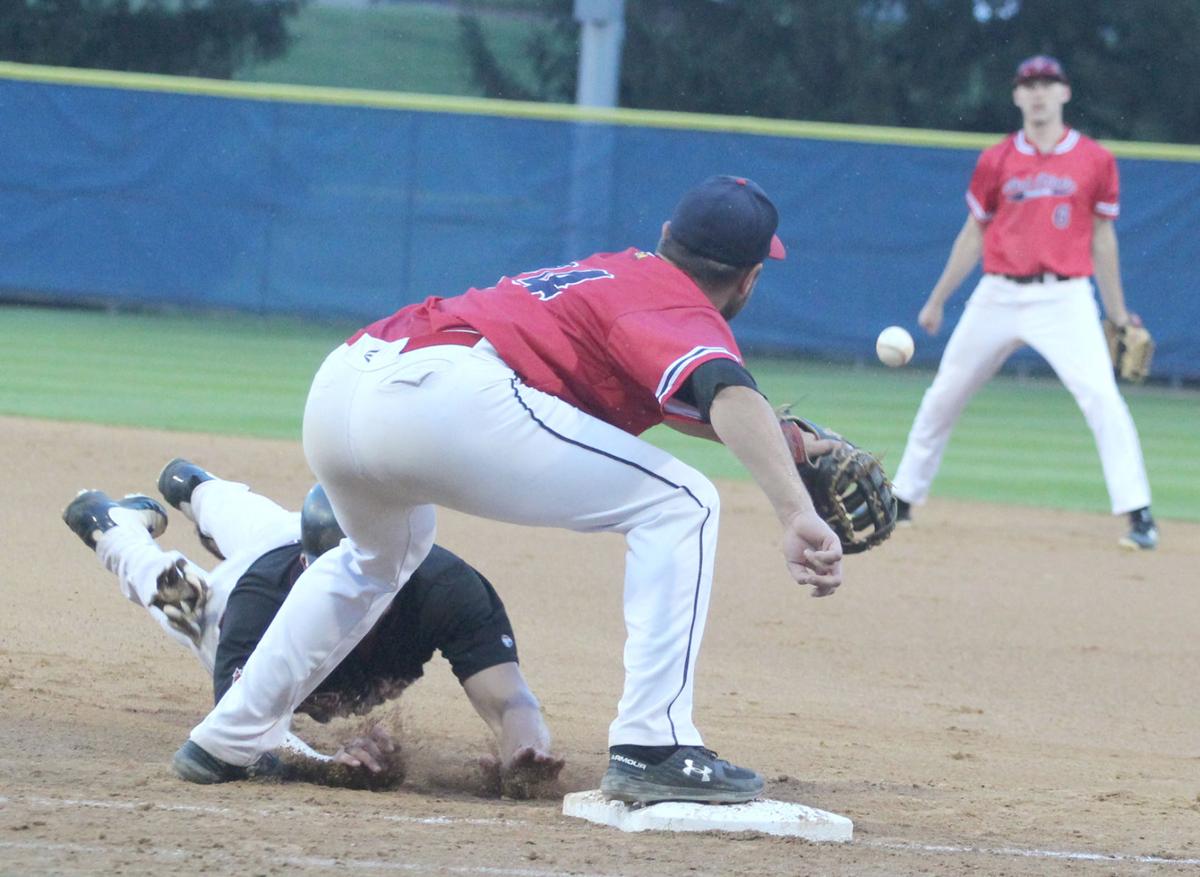 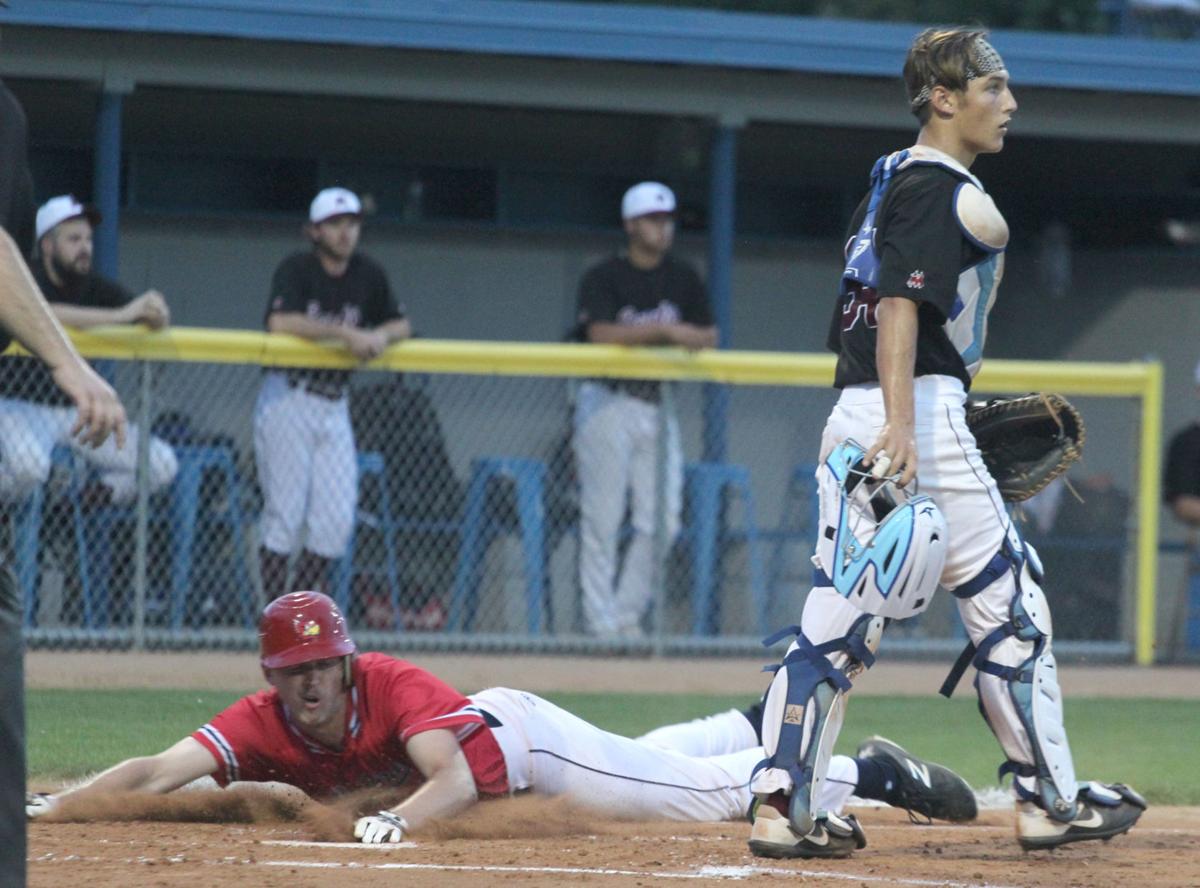 Aaron Kloeppner, 3-for-3 with three RBIs, slides into home plate on a stolen base, part of a two-run second inning for Chanhassen in the Class B State Tournament opener Aug. 21 in Shakopee.

Jackson Goplen is greeted by Chanhassen teammates Michael Jurgella and Ryan Diers after a two-run double from Aaron Kloppner gave the Red Birds a 6-0 lead Aug. 21 in the Class B State Amateur Baseball Tournament opener.

Aaron Kloeppner, 3-for-3 with three RBIs, slides into home plate on a stolen base, part of a two-run second inning for Chanhassen in the Class B State Tournament opener Aug. 21 in Shakopee.

It took more than 48 hours for two-time Minnesota Amateur Baseball Class B champion Chanhassen to advance to round two, defeating St. Michael 7-5 on Sunday, Aug. 23 in Shakopee.

After a 50-minute lightning delay Aug. 21, a non-severe storm halted play in the sixth inning, forcing the two teams back to resume action at the end of the first weekend.

Chanhassen, which led 6-2 at postponement, saw St. Michael, the original No. 8 seed in Region 4, climb within a run at 6-5 in the eighth inning.

A key insurance run and some clutch pitching with the tying runs on base led the Red Birds to its 18th consecutive win, 20th overall this summer.

Chanhassen will play Region 1 No. 2 seed Northfield at 7:30 p.m. on Friday, Aug. 28 at Schleper Stadium in Shakopee.

Whether Friday or Sunday, Aaron Kloeppner had an impact at the plate for the Red Birds.

After driving in three runs with a pair of doubles and a single, helping Chanhassen to a 6-0 lead, Kloeppner kept the hot bat going with a third double, scoring a run in the eighth inning on a wild pitch.

St. Michael, which upset fourth-ranked Blaine in two games at regions, got two runs in the sixth off starter John Straka on RBI-singles from Travis Brown and Boston Merila.

After picking up a third run after the game was resumed off reliever Chris Choles, Alex Naasz hit a long 2-run homer to draw the Saints within 6-5 in the eighth inning.

Reliever Miles Nablo set down the final three batters of the eighth, stranding two runners on base in the ninth inning with the 7-5 lead for the save.

Chanhassen scored twice in the second inning, a two-out run-scoring single from Aaron Pfaff to plate Jackson Goplen before a rundown between first and second base allowed Kloeppner to score for a 2-0 lead.

Brandon Arnold doubled and later scored on a sacrifice fly at 3-0 in the third inning for Chanhassen.

Kloeppner plated Goplen from first base on an RBI-double at 4-0 in the fourth inning before scoring two more in the fifth on a second double, his third hit of the game, at 6-0.

Goplen was also 2-for-3 with three runs scored for the Red Birds.

Straka earned the win, striking out seven batters with two runs allowed on five hits over six innings of work.