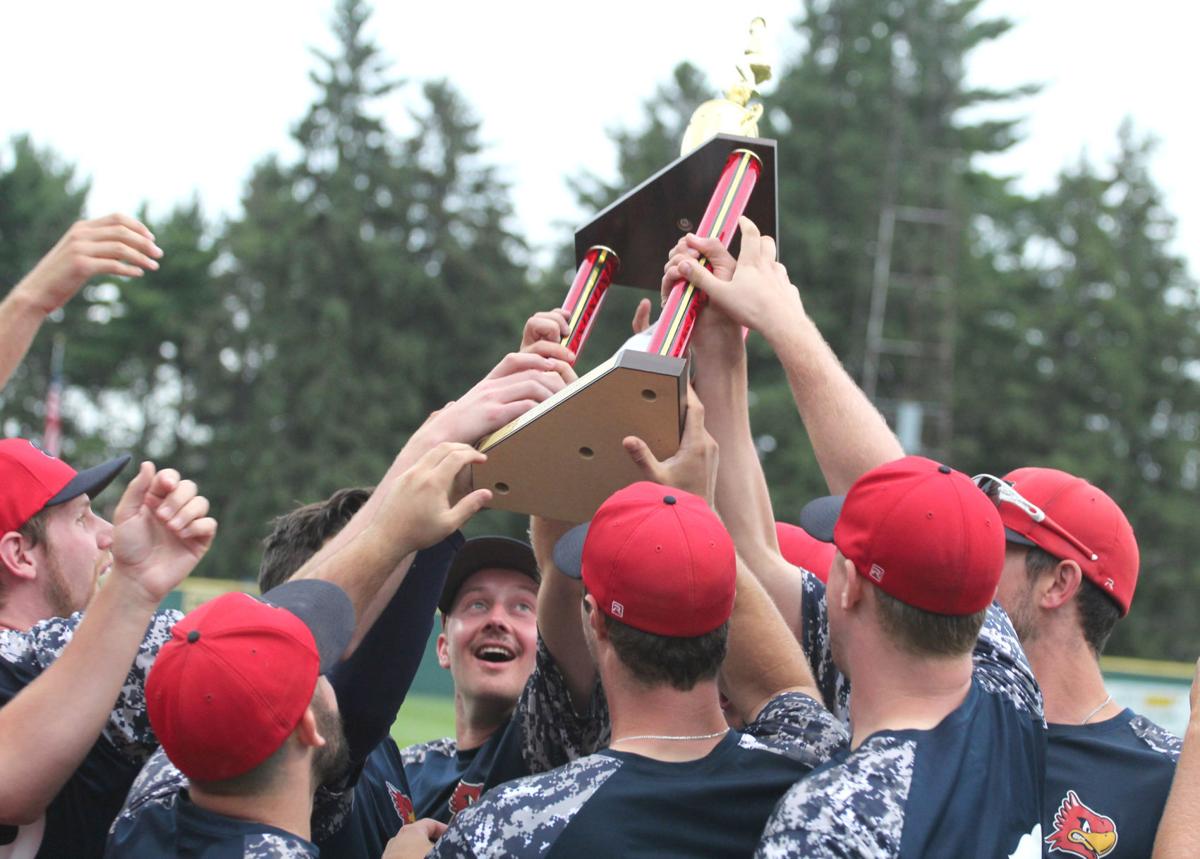 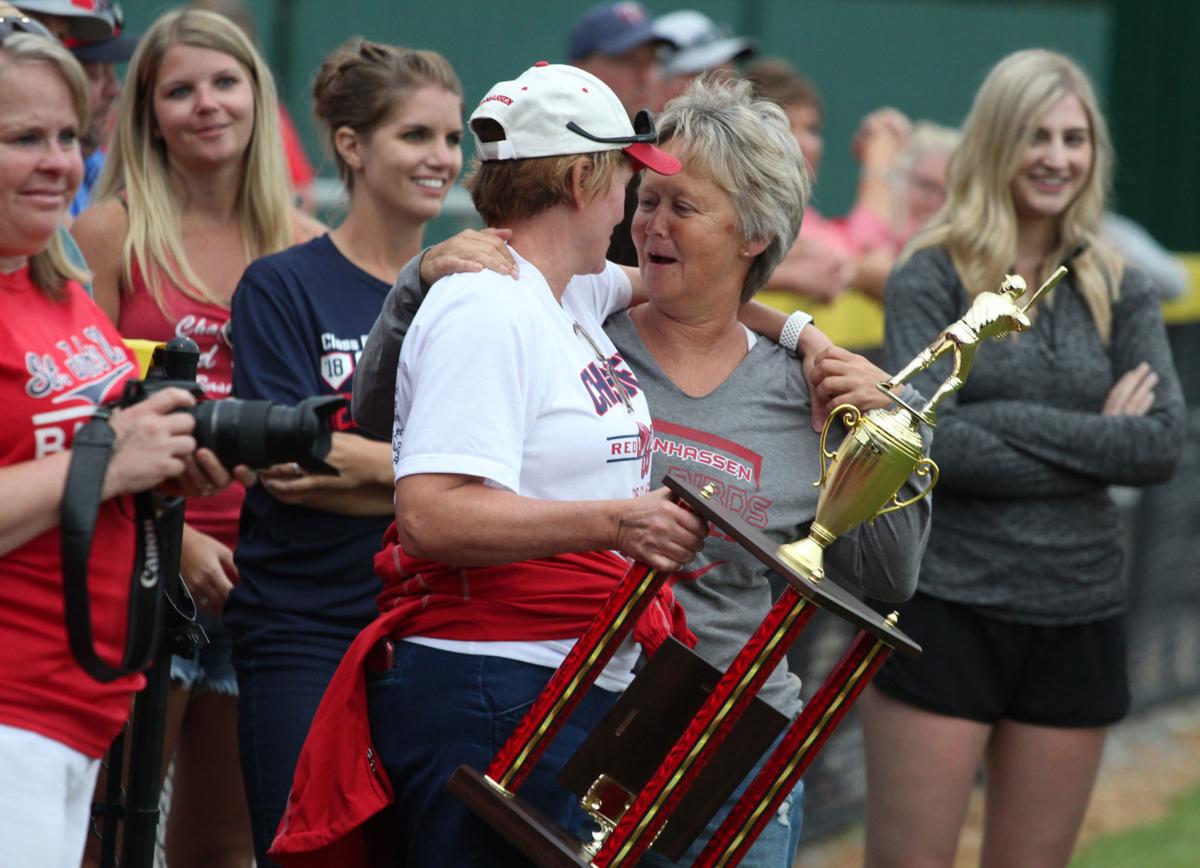 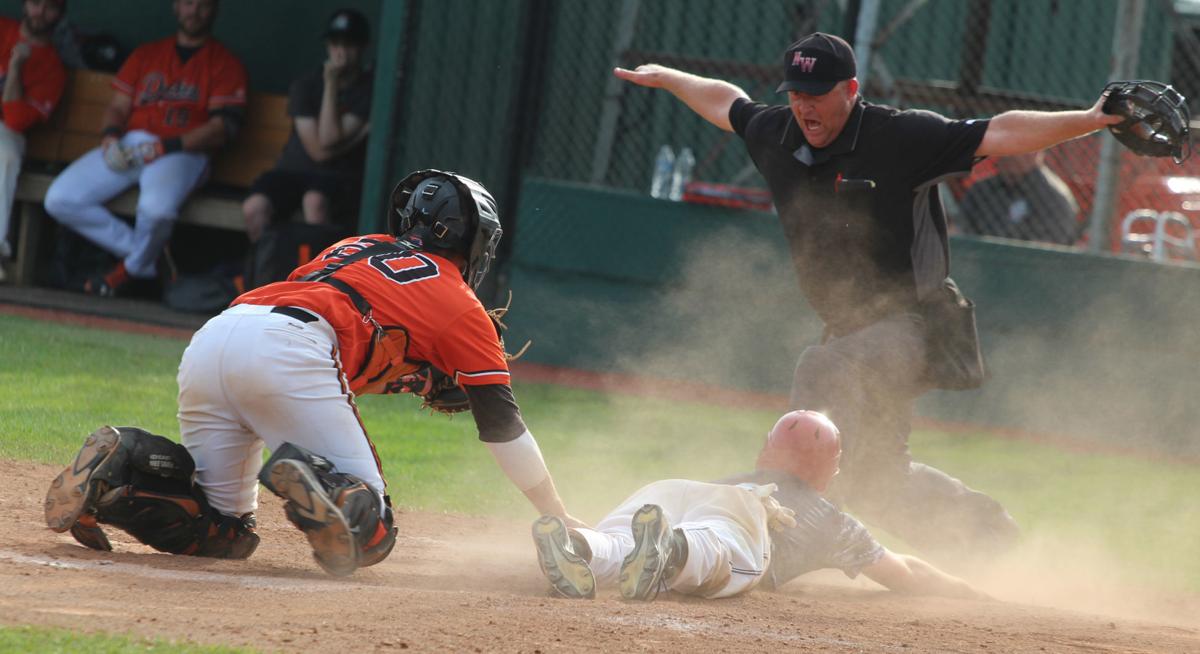 Aaron Kloeppner scores the eventual winning run, part of a six-run fourth inning for Chanhassen versus Dundas in the state title game Sept. 2. Kloeppner came home from second base on an infield error. 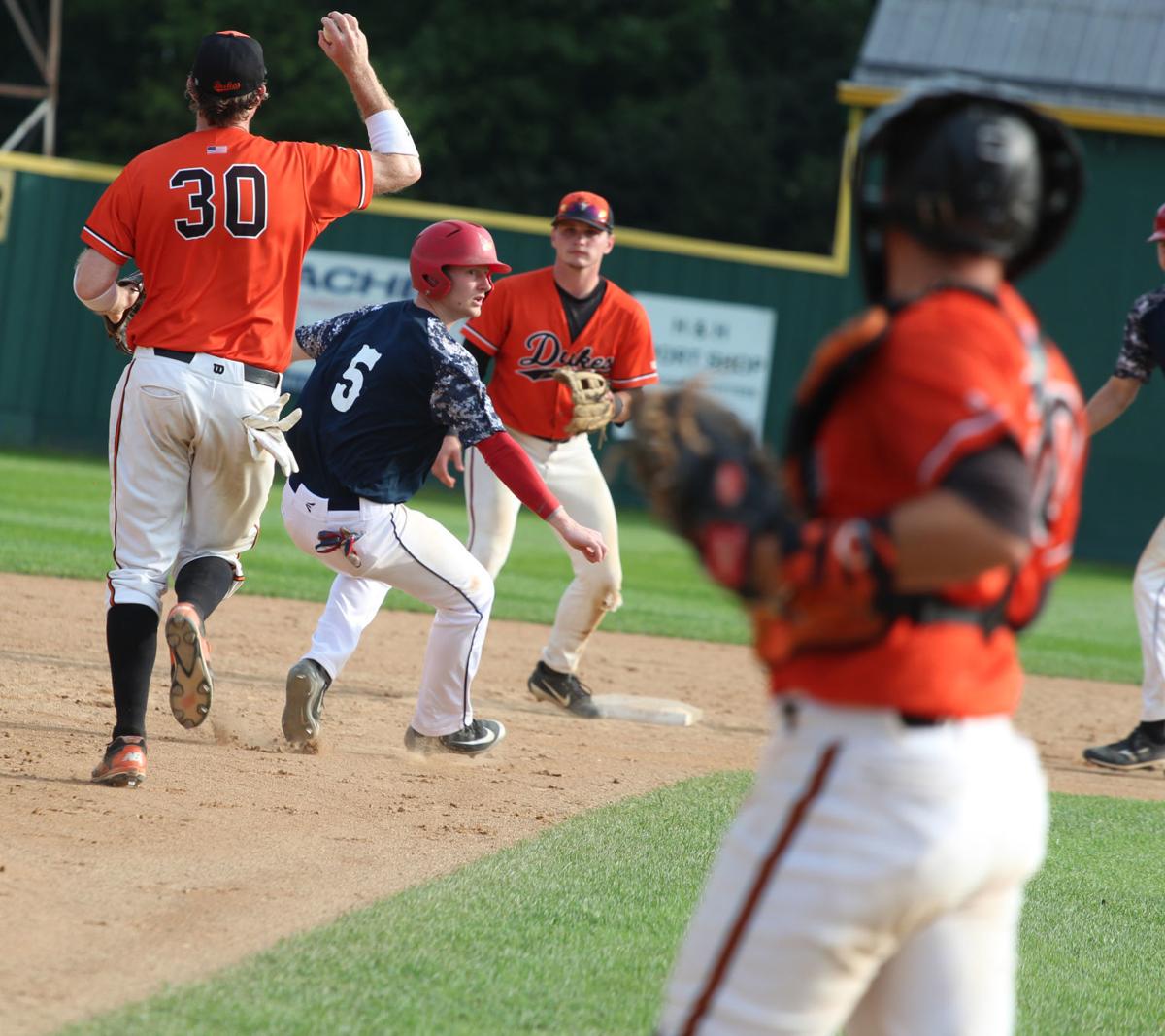 Aaron Pfaff is caught in a rundown between second and third base for the second out of a six-run fourth inning for Chanhassen versus Dundas. 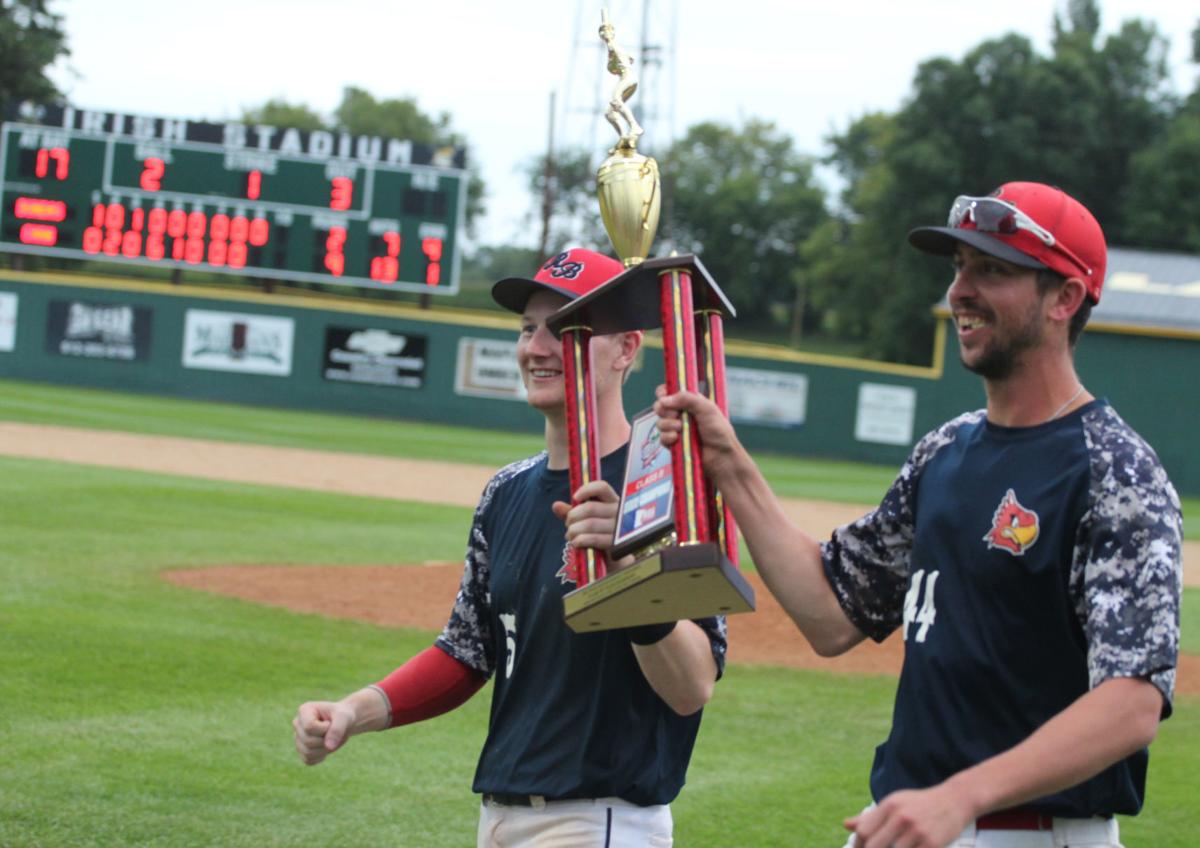 Derek Smith applies the tag to the Dundas runner, the ball coming loose for the championship game's first run. 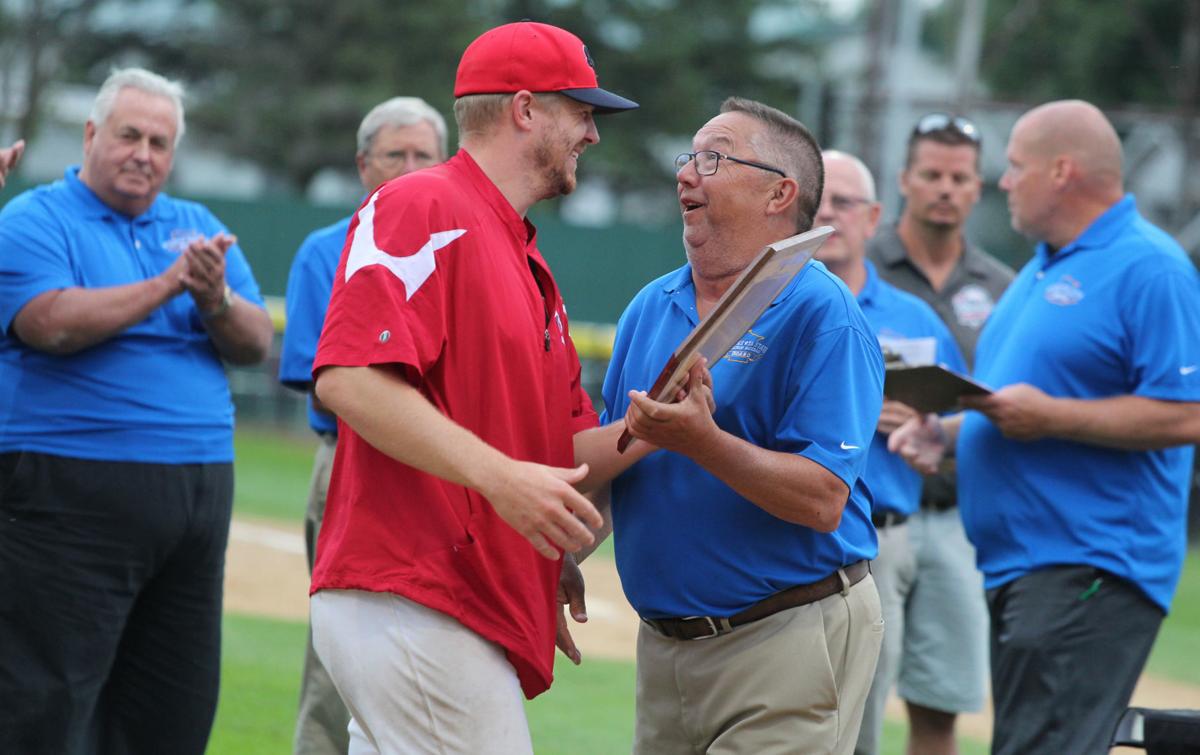 Second baseman Aaron Kloeppner gloves the ball for a tag on a stolen base attempt for Dundas.

Aaron Kloeppner scores the eventual winning run, part of a six-run fourth inning for Chanhassen versus Dundas in the state title game Sept. 2. Kloeppner came home from second base on an infield error.

Aaron Pfaff is caught in a rundown between second and third base for the second out of a six-run fourth inning for Chanhassen versus Dundas.

Derek Smith applies the tag to the Dundas runner, the ball coming loose for the championship game's first run.

Second baseman Aaron Kloeppner gloves the ball for a tag on a stolen base attempt for Dundas.

Eighteen straight zeroes put up to start the tournament, Chanhassen suddenly found itself with zero margin for error in the Class B State Amateur Baseball Tournament.

On the brink of elimination, the tall task of winning five straight games over three days loomed ahead.

Pitching carried them to the first four wins then the offense took over. There was no stopping the Red Birds' rally train once it got going in Maple Lake Monday on Labor Day.

Twenty-eight hits, 17 runs, once again doubleheader winners on the last day of the season. Once again state champions.

The Chanhassen Red Birds, or whatever they've been called all summer, are No. 1.

"No. 2 might feel even better than No. 1," Chanhassen's Shawn Riesgraf said. "Once you get that first one the target is on your back all season. You see everyone's ace. You see different stuff from every team. They're gunning for you. Expectations are high. We expected to defend the title. And everything worked out great and it feels good to get No. 2."

Held to eight runs in the first five games of the state tournament, Chanhassen outscored opponents 26-3 over the final two days in three games.

Just like in 2018 when Chanhassen beat Miesville twice on Labor Day -- the Hens did the same to the Red Birds in 2017 -- once the momentum kicked over to Chanhassen's side, there was no stopping it.

"Guys got more comfortable in the box. We had better approaches. Our pitchers obviously picked up the slack early on. Our batters were rested. They didn't have to run the bases very much. Saturday after the games, we talked a little bit. Pitchers had been doing their jobs and we knew we had to start to pull our weight," Riesgraf said.

A 2-2 ball game in the fourth inning, a pair of Dundas errors helped the Red Birds start a six-run rally. Following a run-scoring miscue, Riley Johnson, Brandon Arnold and Michael Jurgella went back-to-back-to-back with single for the 6-2 advantage.

Following a hit by pitch, 2018 state MVP Justin Anderson delivered the knockout blow, a two-run single for the 8-2 lead.

Logan Spitzack, in relief of starter Riesgraf in the fourth inning, surrendered just three hits and two walks with four strikeouts over the final six innings for his second win of the tournament.

It was the all-hands-on-deck readiness of the Chanhassen arms that allowed them to do the unthinkable over one long weekend of baseball.

"It's tough, but a testament to how deep our staff is. We played 59 innings this weekend and we had arms left to burn. These guys put in the work during the off-season to be ready for this state tournament. They've been throwing all year for this moment. They came in and competed, and did what they have all year," Riesgraf said.

As a staff, Chanhassen allowed just 10 runs (nine earned) in 78 innings of the state tournament.

That's why of the four all-tournament members Chanhassen had selected, three were pitchers -- Spitzack, Miles Nablo and John Straka. And the tournament's most valuable player went to Straka.

Chanhassen's offense contained to the seventh inning, a Garrett Fischer RBI-double followed by a Jurgella run-scoring single that was enough for a victory.

Fischer, Jurgella and Derek Smith each had two hits for the Red Birds, while all-tournament team selection Dylan Peterson had one of three Chaska hits with a double.

Chanhassen survived a scare in the second game Aug. 31, a total of 14 innings needed in a 2-1 win over Moorhead.

Matt Smith's walk-off single scored Aaron Pfaff from second base, capping an evening in which pitchers Dominic Reed and Nablo combined to hold Moorhead to two hits with 11 strikeouts.

Reed threw the first 11 innings, his 138-pitch performance including eight strikeouts. Nablo worked the final three innings for the win.

A one-out walk to Pfaff followed by an Anderson single put the winning run in scoring position.

Matt Smith with the walk-off single in the Bottom of the 14th! Birds survive 2-1 over Moorhead to move on to Sunday. Dom Reed and Nablo combine for a 2-hitter. Maple lake shoe beer for Matty! pic.twitter.com/F8xFUT8Dww

Among the final three teams in Class B, Chanhassen got a rematch with Blaine on Sept. 1 and from the opening at-bats it was all Red Birds.

Jurgella blasted a home run in the first inning. Consecutive walks to Fischer, Johnson and Anderson with the bases loaded plated three runs before a fielder's choice pushed the advantage to 5-0.

Chanhassen added two runs in the eighth and ninth innings for a 9-0 final.

Chris Choles, a relief pitcher for the Red Birds and in college at North Dakota State University, threw his first complete game since early in his school days, he said.

The victory moved Chanhassen into the championship round Sept. 2, needing two games to claim the title.

Nablo earned his second win, an 8-1 decision over Dundas, in the complete-game effort. Of the seven hits allowed, only one was for extra-base hits.

Meanwhile, Chanhassen awoke for 13 singles, two doubles and a triple, scoring in five of nine at-bats.

Nick Smith drove in three runs with three hits, while Johnson was 3-for-5 with two runs scored in the lead-off spot. Arnold, Anderson and Riesgraf also collected two hits each.

There was no stopping the Chanhassen Red Birds again this season.