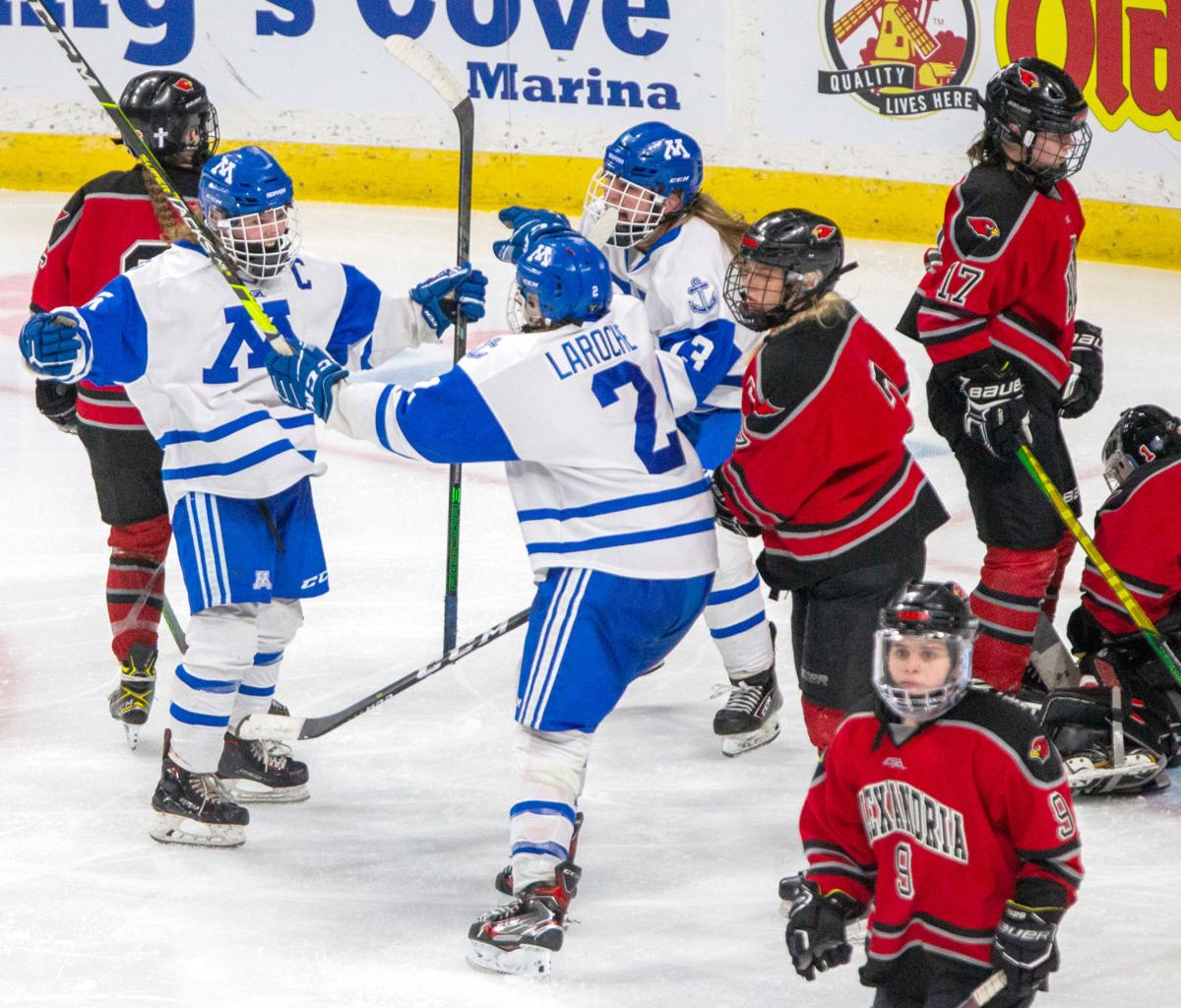 Olivia LaRoche (2) and Lindzi Azar (13) skate to celebrate with Kayley Crawford after the Minnetonka captain scored the game-winning goal in double overtime in the Class AA State Girls Hockey Quarterfinals on March 27. 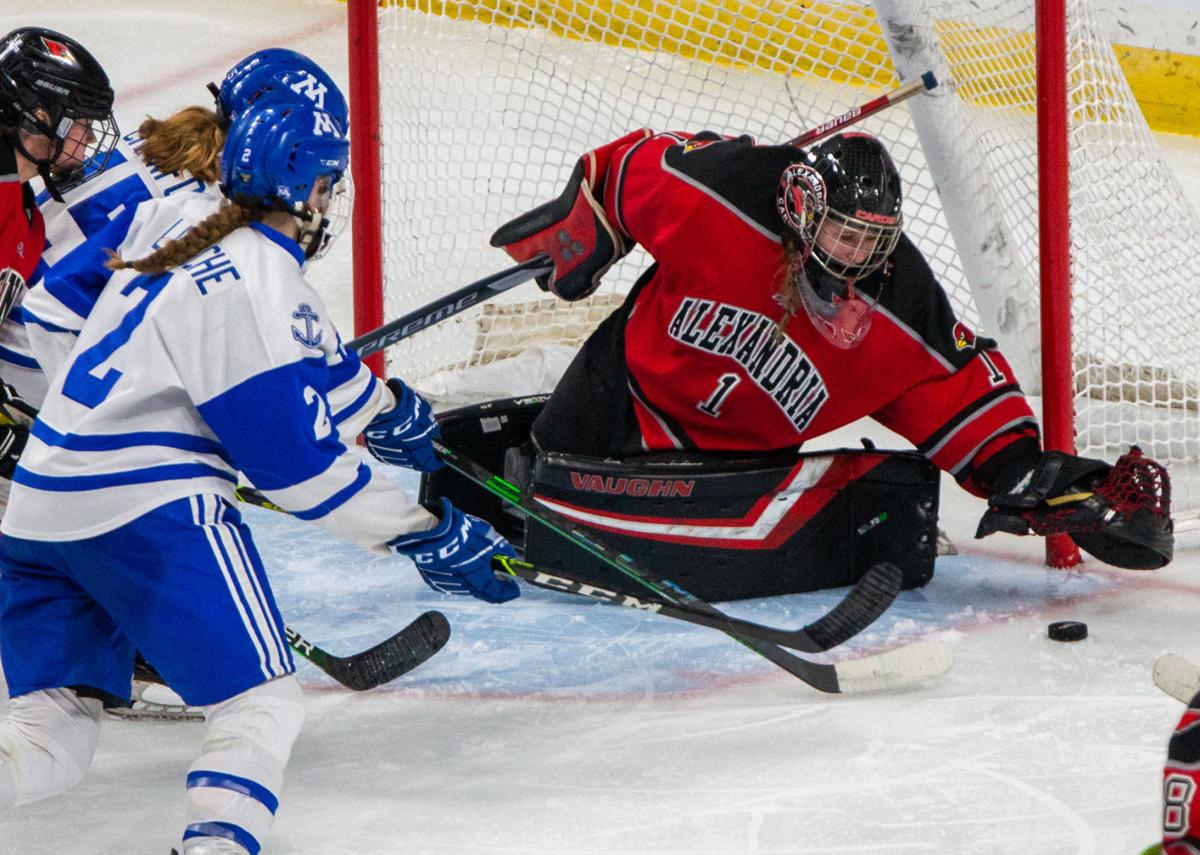 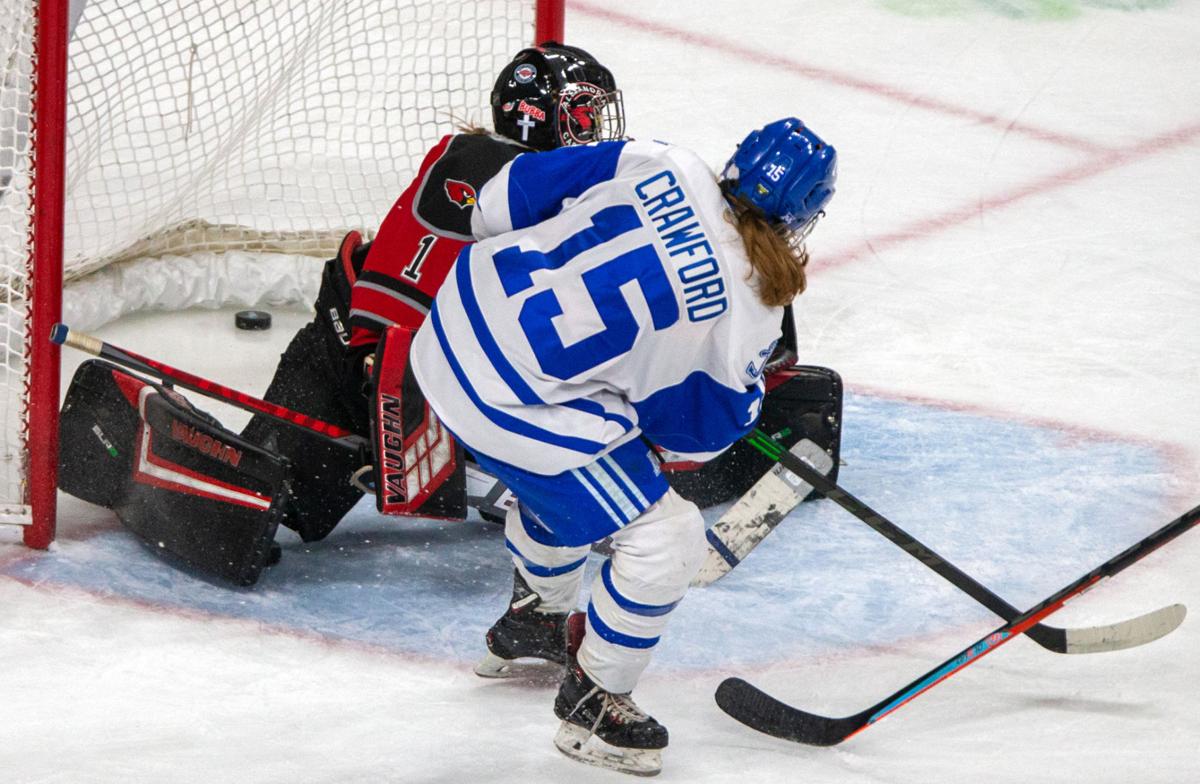 Minnetonka’s Kayley Crawford sneaks a puck around the left pad of Alexandria’s Jordan O’Kane for the 1-0 lead with 90 seconds left in the second period in the Class AA State Quarterfinals. 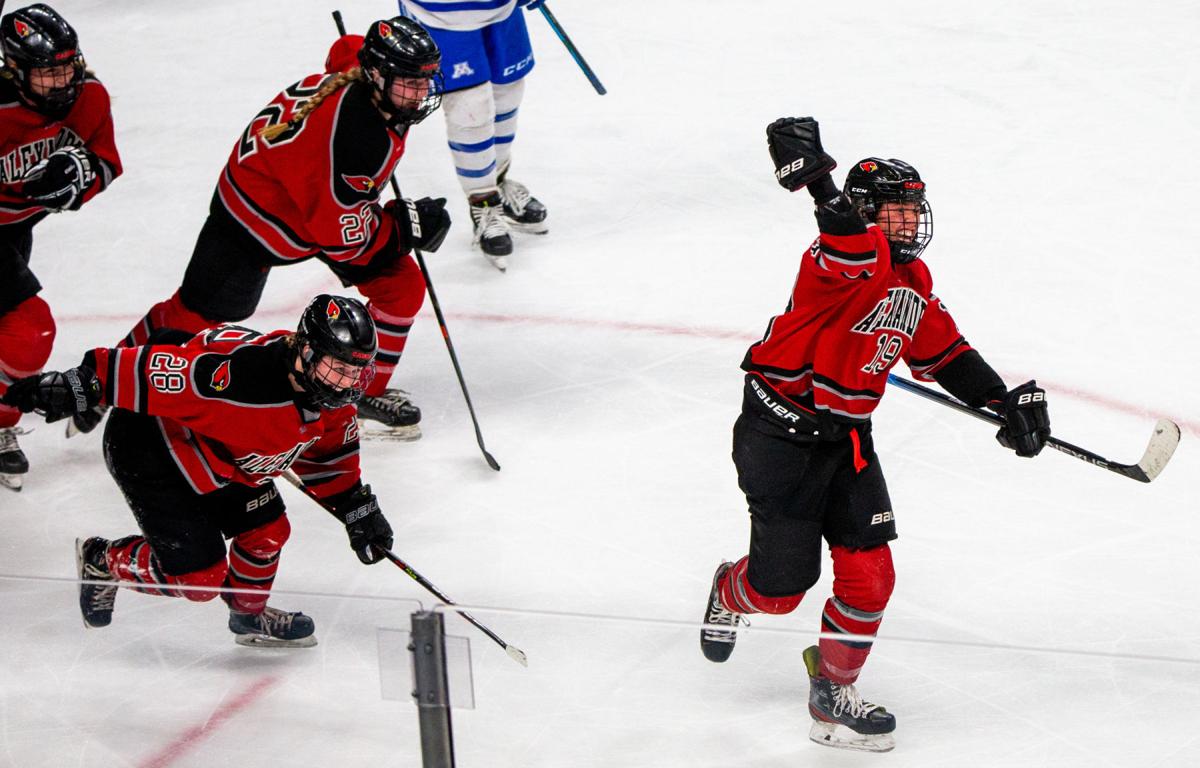 Ella Westlund (19) celebrates after scoring a tying goal with 13.3 seconds left for Alexandria in the Class AA Girls Hockey Quarterfinals versus Minnetonka on March 27. 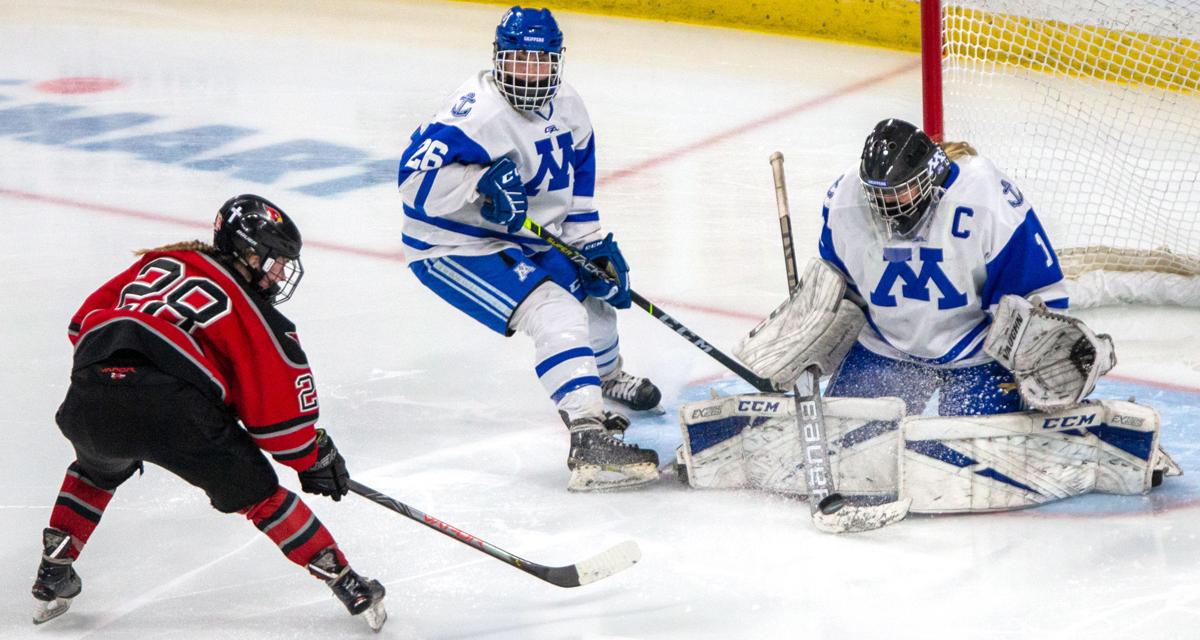 Minnetonka goaltender Brynn Dulac with a stick save on an Alexandria shot in tight in the third period on March 27. 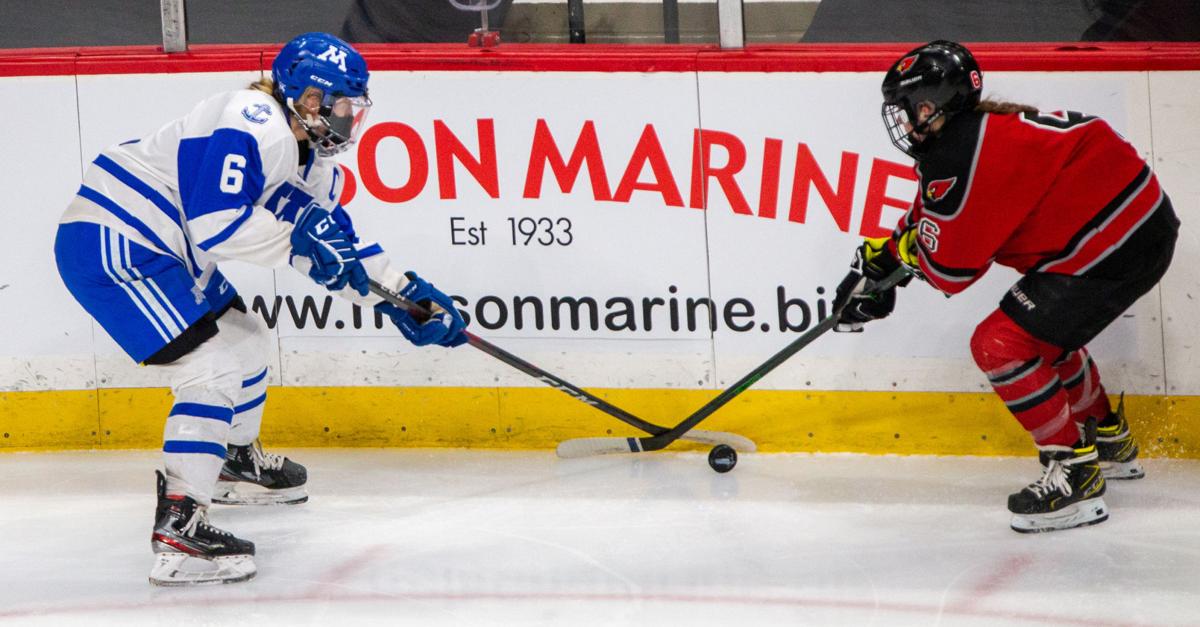 Minnetonka senior captain Hanna Baskin is in a stick battle with an Alexandria skater in the Class AA State Quarterfinal on March 27.

Olivia LaRoche (2) and Lindzi Azar (13) skate to celebrate with Kayley Crawford after the Minnetonka captain scored the game-winning goal in double overtime in the Class AA State Girls Hockey Quarterfinals on March 27.

Minnetonka’s Kayley Crawford sneaks a puck around the left pad of Alexandria’s Jordan O’Kane for the 1-0 lead with 90 seconds left in the second period in the Class AA State Quarterfinals.

Ella Westlund (19) celebrates after scoring a tying goal with 13.3 seconds left for Alexandria in the Class AA Girls Hockey Quarterfinals versus Minnetonka on March 27.

Minnetonka goaltender Brynn Dulac with a stick save on an Alexandria shot in tight in the third period on March 27.

Minnetonka senior captain Hanna Baskin is in a stick battle with an Alexandria skater in the Class AA State Quarterfinal on March 27.

A shot advantage of 32-11 through two periods, Minnetonka found themselves uncomfortably ahead just 1-0 into the third period.

The level of comfort didn't ease as Alexandria scored the equalizer with 13.3 seconds left in regulation.

One shot, the next goal, was going to decide the Class AA State Girls Hockey Quarterfinal March 27 at Xcel Energy Center.

"The talk was we've had this game the whole time. It's ours for the taking," Minnetonka captain Kayley Crawford said of the mood after regulation. "It was hard for us. They had the momentum. And we had to keep fighting there in overtime. I think we really used the intermission between the two overtimes to our advantage. That's where we regained the momentum. Where we got our legs back. And then we capitalized."

Crawford, who gave Minnetonka a 1-0 lead with 90 seconds left in the second period, her eighth goal of the season, knew it would take an exceptional effort to beat Alexandria goaltender Jordan O'Kane once again.

O'Kane turned away 57 shots in the game, a remarkable effort from the junior goaltender, who lost for the first time in 15 starts. She did not play in a Jan. 16 road loss by a 5-2 score at Minnetonka.

"She was tough to play agaisnt. Our defense likes to shoot from the point and she was taking that away from us. It wasn't working. Not having faced her in the first game, that wasn't something I was expecting," Crawford said.

After a scoreless first overtime session of eight minutes, following a resurface, Minnetonka got the winner at 2:36 of the second extra time period. A backhand pass from Olivia LaRoche behind the net found the stick of Crawford all alone in front.

Crawford's ninth tally -- her largest of her career -- moved Minnetonka to the state semifinals for a third straight year.

"I think I called for it, but Olivia, she just knew I was kind I was there. It was a perfect pass," said Crawford.

It was the first time LaRoche, who moved up from defense to forward in Crawford's absence, was on the line with Crawford and Lindzi Avar.

"Olivia is so good on the power play, playing that spot in front of the net. It really seems to come natural to her. Lindzi is one of the most talented players I know. She's still so raw. She's going to be a good one," Crawford said.

That line was as good as any in the game.

That Crawford was on the ice at all for Minnetonka was uncertain. She missed three games leading up to the tournament, including the section championship against Holy Family Catholic.

Crawford also was relegated to the bench in street clothes and a helmet during the 2019 state tournament.

The Harvard commit, one of four captains on the three-peat Section 2AA champion squads, was excited to be cleared to play.

"I'd say in the first period, it was a combination of being out there for the first time in a game in a couple of weeks and being at the X, it took some time to get going. But I really thought our line was good. We had a bunch of chances," Crawford said.

Despite a 49-21 shot advantage through 51 minutes of regulation, the two teams were tied at one after Ella Westlund buried a loose puck in a pile of skates and sticks with the Alexandria goaltender pulled and the Skippers just coming off a penalty kill.

Minnetonka nearly ended it at the end of the first overtime on a Grace Sadura shot that clanked off the pipe.

Brynn Dulac, senior captain for Minnetonka, making her seventh state tournament start over a three-year run, came up with 27 saves, including 18 over the second and third periods when Alexandria pushed for a tying goal.

Earlier in the day, Dulac was named a Senior Goaltender of the Year finalist along with Prior Lake's Alex Pellicci, Benilde-St. Margaret's Carly Greene, Maria Widen of Burnsville, and Abbie Thompson of Mounds View.

With the quarterfinal victory, Minnetonka, the No. 3 seed at 16-3-3 overall, will face second-ranked Edina in the semifinals at 6 p.m. on Thursday, April 1, at the Xcel Energy Center.

The Hornets, one of two undefeated teams in the field along with Andover, beat Minnetonka 3-2 and 3-0 in the regular season.

"They're a very talented team. There's no doubt. But I know, especially from the first game we played them, there is no reason we can't take them on, give them a game and win. We're just as talented as they are," Crawford said.

Andover and Eastview, which beat Stillwater 1-0, will meet in the second semifinal at 8 p.m. The winners will meet for the championship on Saturday, April 3. There is no third-place game in 2021.

The four-day break between the quarterfinals and semifinals may be a blessing in disguise for Minnetonka.

"We were talking as a group, we're really happy with the set-up this year especially after the Alexandria game. It was grinding. And if we're going to win a state championship, beating Edina and probably Andover, it's going to be three grinders. That would have been tough over three days. Now we get to practice a couple of days, prepare for Edina and be ready to go," Crawford said.

Seventeen minutes from a return trip to St. Paul and the Class A State Semifinals, Mound-Westonka/Southwest Christian couldn't hold on to the lead, falling 4-3 to Chisago Lakes in the quarterfinals on March 26.

Two Wildcat goals 78 seconds apart, with under seven minutes to play in regulation, was the final difference.

Dani Burgen completed her hat trick for Chisago Lakes on the power play to rally the Wildcats from a 3-1 deficit, tying the game with 6:50 left.

Jenna Lawry's winner came with 5:32 on the clock for Chisago Lakes, which was outshot 26-22 by MW/SWCHS.

Goals from Emily Wendorf, Gretta Pioske and Sydney Leonard over the first two periods staked the White Hawks to a 3-2 lead. Leonard and Pioske each finished with three points for the game.

Callie Nelson made 18 saves for MW/SWCHS, which finished with a 14-3 record. Chisago Lakes beat the White Hawks 3-2 on Feb. 27 as well.

(2) Edina wins by forfeit over Centennial

All games at the Xcel Energy Center

All games at the Xcel Energy Center