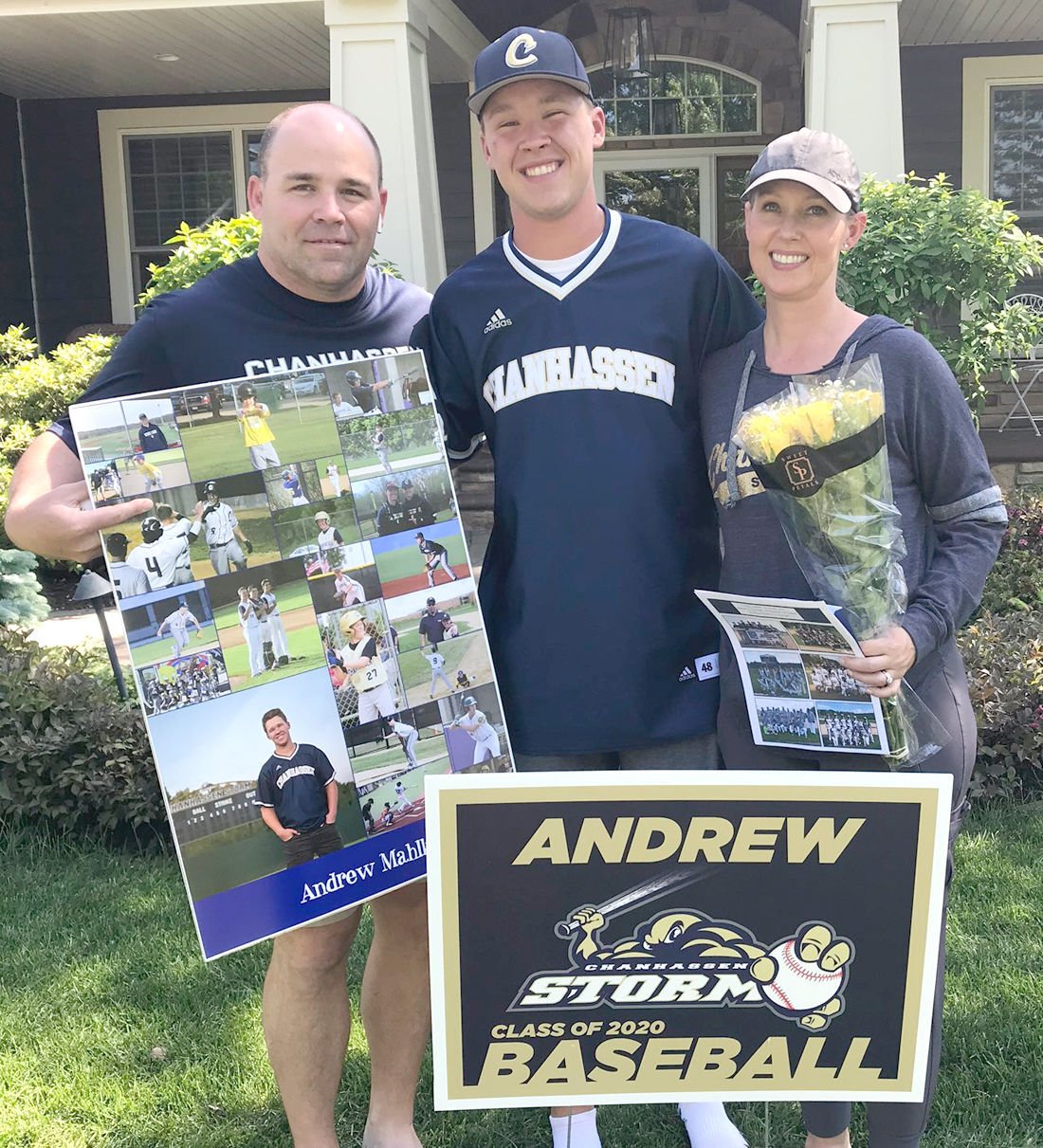 Without the opportunity for senior night at home plate this year, Chanhassen Baseball took senior night to their homes. Senior stop-ins, including this one at the home of Andrew Mahlke, were to honor players and their families for all they have done. 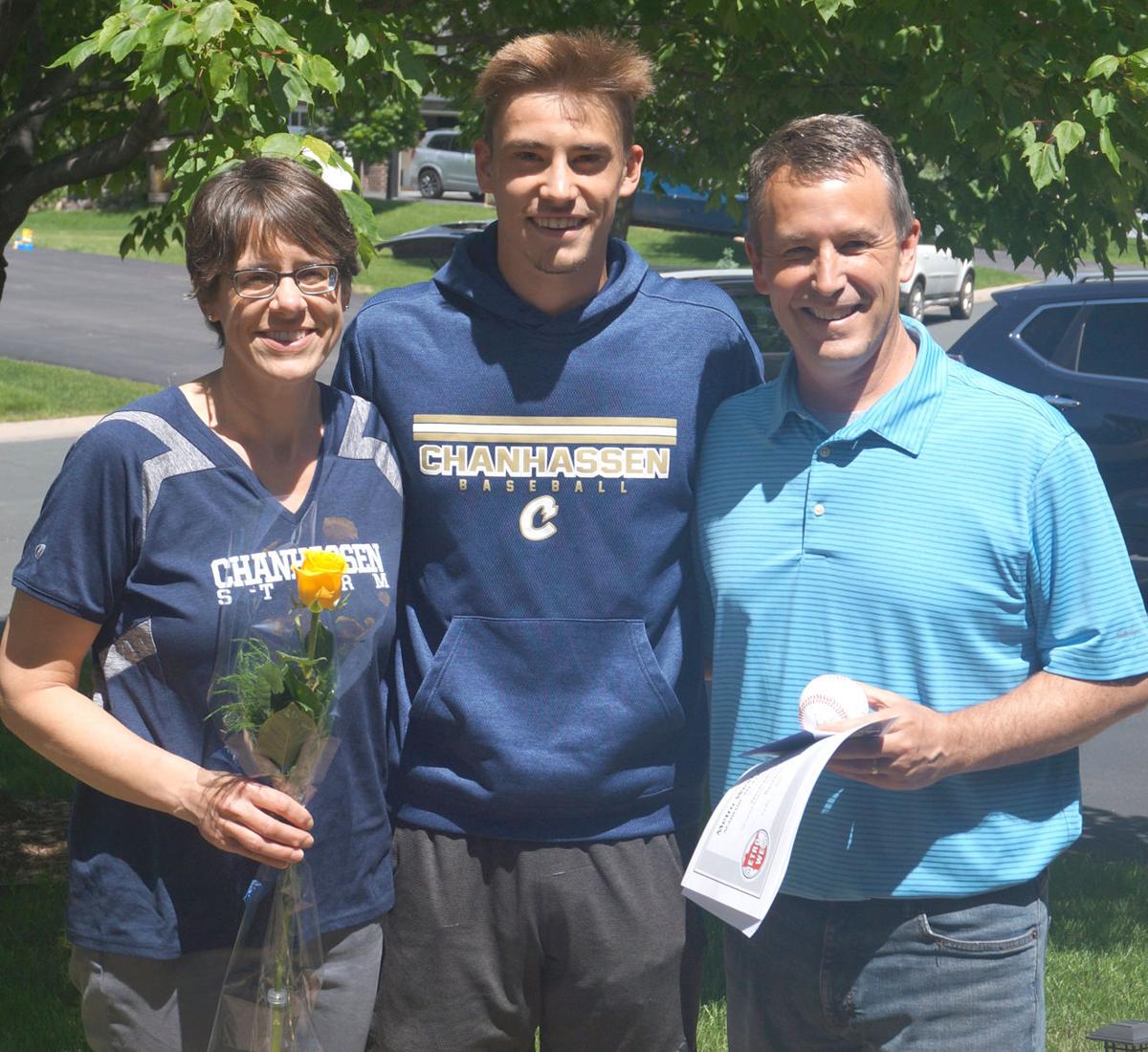 Jacob Mrosko is headed to Purdue University to play for the Boilermakers next season. 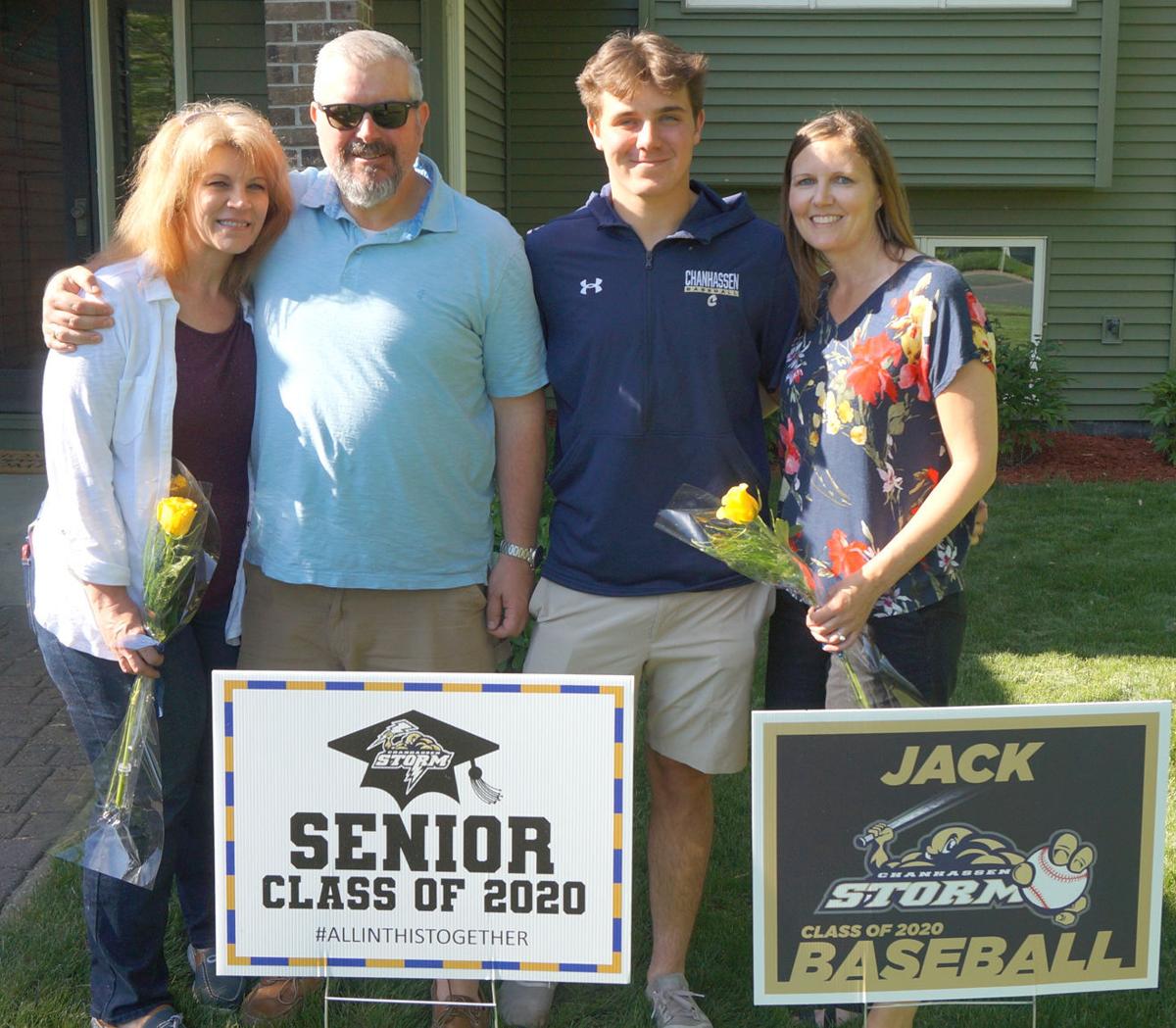 Jack Nemetz will play baseball at the University of Minnesota-Duluth and study criminal justice.

Without the opportunity for senior night at home plate this year, Chanhassen Baseball took senior night to their homes. Senior stop-ins, including this one at the home of Andrew Mahlke, were to honor players and their families for all they have done.

Jacob Mrosko is headed to Purdue University to play for the Boilermakers next season.

Jack Nemetz will play baseball at the University of Minnesota-Duluth and study criminal justice.

Not often will you find a class as large as the Chanhassen varsity baseball team had with the Class of 2020.

For Mrosko, a potential Metro Player of the Year candidate, his future set with Division I Purdue University, the 2020 season was about making the best of it one last time together.

"I miss the competition. I have been able to play with a lot of the guys from our section teams, so I miss not playing them again. I miss playing with my classmates one last time. A lot of these guys we've been together for a lot of years," Mrosko said.

"We were all hoping for the best. A lot of us seniors were still working hard, still practicing hitting, throwing, hoping we would have some sort of season," Nemetz said. "I worked really hard this year to be ready for my senior year. I was really looking forward to being the full-time starting catcher."

"I think growing up, going through the program, I was fortunate enough to play two years. It was fun to see the leadership of the seniors, their impact on the younger players. I was really excited to be that leader this year, make memories with all of the guys. We had a really strong brotherhood.," Mahlke said.

Mahlke never made the triple-A baseball travel team as a youngster. He made it a point at around the age of 14 to change that.

He credits former Chanhassen baseball players Carson Hake, Jack Garrison and Tommy Thompson, among others, for showing him and his teammates the amount of work it takes to get to the next level.

"I started hitting with Zach Hoffman at Pitch2Pitch a few years ago. We really focused a lot on my swing, on my approach at the plate. I'd also say about my sophomore year I found the weight room, and really started with the weight programs with Barret Panning," Mahlke said.

The senior first baseman, among his favorite moments from the high school team includes a game-winning home run in a 1-0 win over Chaska last season, also credited second-year Storm head coach Ross VanHauen for his work in building team closeness.

"(Coach) stepped in last year and made it a point of getting guys in the weight room. He wasn't focused on us just getting stronger, but also developing team chemistry before the season even began," Mahlke said.

Pitching was certainly going to be a strength of the Storm this spring.

"We had a lot of pitching depth. Obviously we had Jacob, but with Kody, Noah and Greg, others, and we also had some underclassmen dudes. A lot of guys who could pitch in big games," Mahlke said.

For Nemetz, a standout bat for the Storm in 2019, he has been catching for Mrosko and Dalen since the age of 10, and catching Ryun the last four seasons at various levels.

"We all had such a good bond. Just really strong connection between pitcher and catcher," Nemetz said. "I was super excited for spring break practices, the team bonding that happens that week. Us seniors got super close with the juniors and I was really looking forward to continuing to make new friendships with my teammates."

Nemetz was all set to attend community college in Duluth, working on getting a degree toward a career in being a conservation officer. Then plans changed.

"My mom asked me if I wanted to do a baseball camp up in Duluth. I did the camp and was talking to the coaches and they approached me about playing for them" said Nemetz of the University of Minnesota-Duluth.

As the potential of the 2020 high school season being played looked bleak, Nemetz decided he wasn't ready to be done with baseball.

"I just love the game too much. I still wanted to play. Going to UMD gives me the chance to do that," said Nemetz, who has family in the Duluth area, a favorite spot of his for fishing. His career plans haven't changed, a major in criminal justice is in the cards.

Mahlke, headed to St. John's University as well, said having four more years ahead of him softened the loss of the 2020 spring season. Well, just a bit.

"The big thing for me when picking a school was, and my parents always told me, if you weren't playing baseball, would you go to this school? St. John's was that place for me. When I visited, everyone was so friendly. You could sense the camaraderie between the team," Mahlke said.

The Johnnies program is among the most-respected in the Upper Midwest. Head coach Jerry Haugen has been the leader of the program for 43 years. Haugen Field, where St. John's plays, is among the top facilities in the Minnesota Intercollegiate Athletic Conference.

One of Mrosko's first visits just happened to be Purdue. From the beginning the coaching staff made him feel wanted.

"We've just had a great relationship from the start. We've been in constant communication all the way through the process. It certainly helps that the university has prized academics. Ultimately my goal is to take baseball as far as it will take me, but so often athletics go through injuries, all sorts of stuff, so to get a great education was very important for me," he said.

It's not just ability with Mrosko, it's determination as well. He made varsity as a sophomore and had a big junior year, giving Chanhassen an ace with incredible stuff, including a fastball that was recently clocked at 93 miles per hour.

"I remember my first live hitting on the high school team was against Ryan Och. He certainly has Division I stuff. I couldn't believe what it was like to be with these guys. It would have been hard to believe I'd be one of those guys now," he said.

Mrosko said the training staff at Starters in Shakopee really helped him get to where he is now.

If Mrosko's fastball was intimidating enough, his deliberate over-the-top deliver, the front elbow pointing toward the sky almost, is certainly deceiving to batters. And catchers.

"The first couple of times you catch him it is not easy. Even after a few weeks of not seeing him it's tough," Nemetz said.

Mrosko laughed. A recent bullpen at Starters brought up the same scenario.

"I've been throwing like that for as long as I can remember. Back in the day, Jack Schaefer's dad, Bob, was my coach. He would always say do whatever feels comfortable so I did," Mrosko said.

Mrosko's arm, as well as his overall game, a center fielder and lead-off hitter for Chanhassen as a junior, had Purdue and others vying for his commitment following a Futures Games event in Indianapolis.

Mrosko said the plan is to pitch and play in the field and hit for Purdue -- rare at the Division I level -- but there remains a lot to be seen.

"It will work itself out. A lot will be determined in what role I play freshman year. My swing has a little ways to go to hit at that level," he said.

Mrosko said Purdue has increased the amount of scrimmages for the fall and the coaches have told all pitchers to come in fresh to be able to compete with all of the returning players, including seniors that are staying for one last season.

"There's going to be a pretty good change. I'll see better hitters, maybe not so much in talent and power, but the hitters know how to hit the ball everywhere. You have to be able to throw any pitch in any count. That's something I've been working on preparing," Mrosko said.

Like all of the Chanhassen players, it is the memories of the past that stick out above all else when it comes up to what was missed out this spring.

"All the nicknames we'd give each other growing up. All the jokes. How a guy would get razzed about an error he made years ago. Everyone around the team really bonded growing up together. All of the memories. All of the good times. This team would have had a lot of fun together. That's what we missed out on," Mrosko said.