AJ Dehnke of Chaska/Chanhassen competes in the 200 individual medley, a combination of all four strokes, in a 96-89 win over Breck/Blake on Jan. 9. Dehnke was third in the event in a time of 2:06.89. 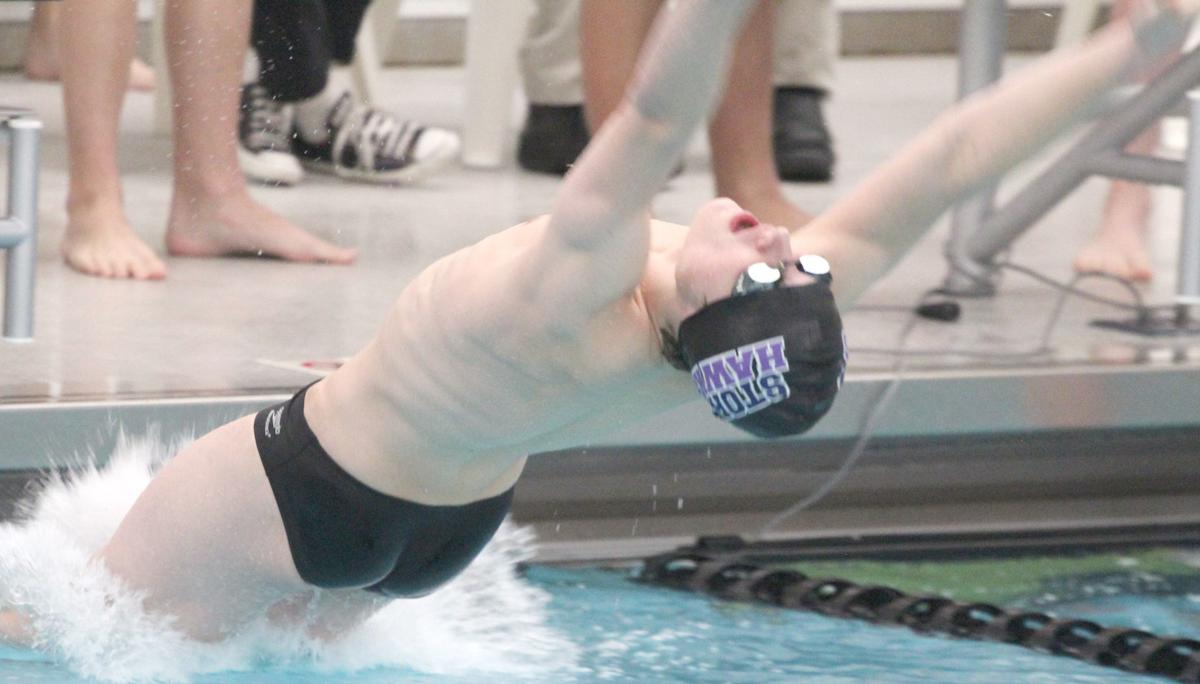 Josiah Dunker pushes off from the wall at the start of the 200-yard medley relay for Chaska/Chanhassen against Breck/Blake on Jan. 9 at Pioneer Ridge Middle School. 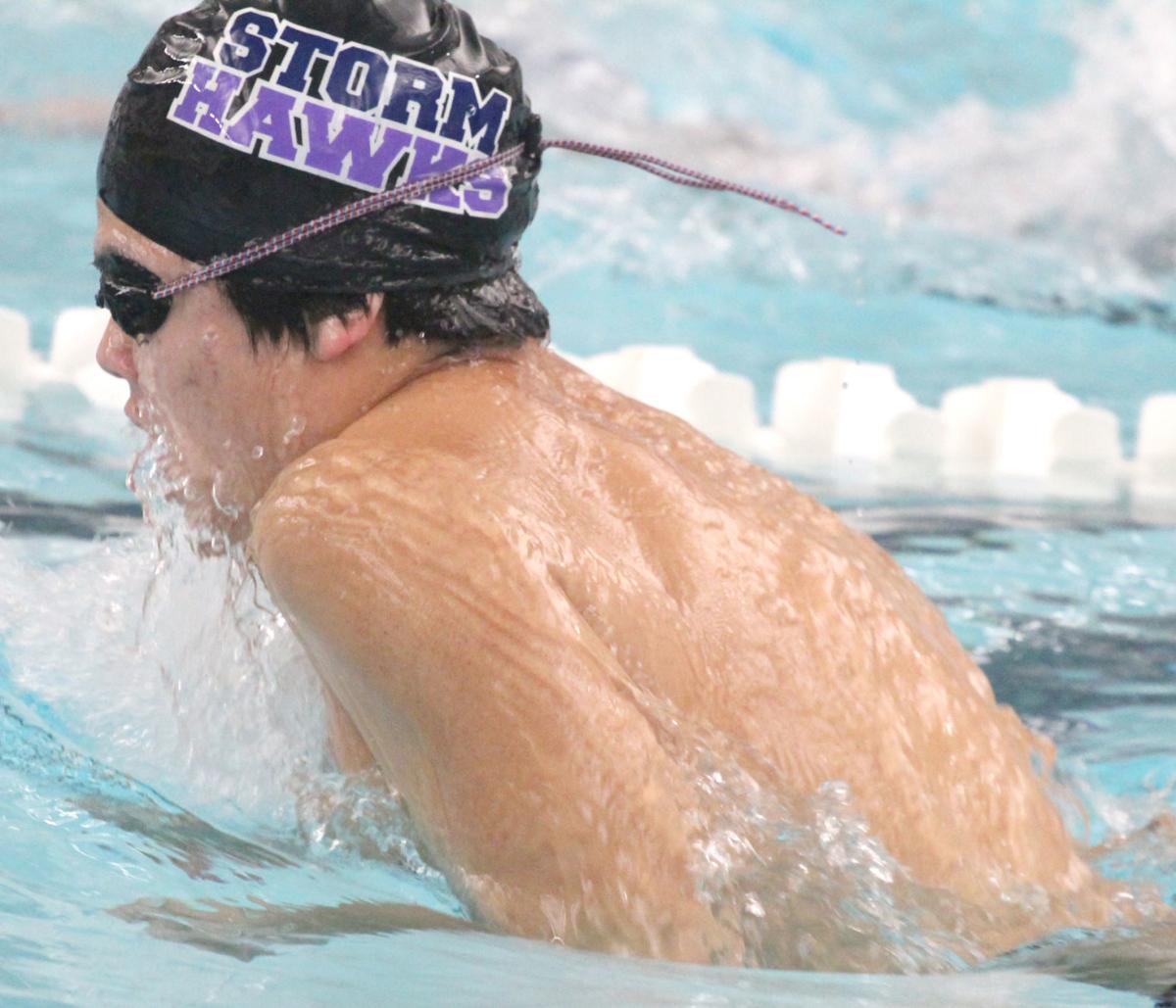 Senior captain Vincent Kim swims breaststroke in the 200-yard medley relay for Chaska/Chanhassen in a home meet on Jan. 9. Kim is one of four seniors in the program along with Luke Ridler, Tom Hubbard and Louie Currie.

AJ Dehnke of Chaska/Chanhassen competes in the 200 individual medley, a combination of all four strokes, in a 96-89 win over Breck/Blake on Jan. 9. Dehnke was third in the event in a time of 2:06.89.

Josiah Dunker pushes off from the wall at the start of the 200-yard medley relay for Chaska/Chanhassen against Breck/Blake on Jan. 9 at Pioneer Ridge Middle School.

Senior captain Vincent Kim swims breaststroke in the 200-yard medley relay for Chaska/Chanhassen in a home meet on Jan. 9. Kim is one of four seniors in the program along with Luke Ridler, Tom Hubbard and Louie Currie.

Sam Brennan entered the pool in third place in the anchor leg of the 200-yard freestyle relay at the 2019 Class AA State Swimming and Diving Championships.

When he hit the wall after 50 meters, the then Chaska/Chanhassen sophomore had moved the relay in a second-place finish. The final split? 20.58 seconds. Only three swimmers in the event were faster, and each were state champions in individual events.

It was one of those swims where greatness was realized by the swimmer.

Now a junior, Brennan continues to push the pace in relays. Back in the University of Minnesota state pool early in January for the Maroon and Gold Invitational, he was part of a winning time in the 200 freestyle relay.

The best of the best were Brennan, juniors Reese Hodgins and Evan Bock, and senior Luke Ridler.

"That was fun. That's our relay. I feel like certain relays have more energy through them, and the 200 freestyle is just a sprint. You get up and go. It's a super exciting relay to swim." Brennan said. "Edina is definitely going to be good, but we're ready to take them on at state."

Relays have been an area of strength in recent years in the Storm Hawks program. Chanhassen won the medley and 400 freestyle relays state titles in 2018.

This year the Storm Hawks look for top finishes in all three relays once again. The 400 freestyle team of Ridler, Louie Currie, Josiah Dunker, and Reese Hodgins are coming off a pool record at the Buffalo Invitational Jan. 11 in a time of 3:19.30.

"I've been swimming second or third in that (200) relay the past couple of weeks. I think (Coach Joe Mau) is just switching things up, seeing how to really build that relay for the post-season," said Brennan.

Chaska/Chanhassen, already with the program's first dual victory over Minnetonka, has a busy January ahead. Swimming an independent schedule, the Storm Hawks see Eden Prairie on Jan. 14 and Wayzata on Jan. 21 at Pioneer Ridge Middle School.

Chaska/Chanhassen also competes in True Team Sections at Hidden Oaks Middle School in Prior Lake Jan. 18 and a road dual at St. Louis Park on Jan. 28.

Beefing up the competition has been a welcome sight for the Storm Hawks.

"I love being challenged by fast swimmers. You get a chance to see them next to you and that brings out more adrenaline in you, makes you compete harder," Brennan said.

Against Breck/Blake, among the top teams in Class A, defeated by two points by Eden Prairie earlier in the week, a winner-take-all 400-yard freestyle relay went the way of the Storm Hawks leading to a 96-89 win on Jan. 9.

Brennan, Dunker, Ridler and Hodgins posted a winning time of 3:12.87.

"Practices are getting harder now. We're getting some good workouts in. I'm actually pretty sore right now," Brennan said. "I'm not really good with the longer sets, my muscles tend to get sore after a while. Guys like Evan, Reese, Josiah, they're just flying and they tell me to keep up. It's fun to have their good influence on me, to push me through."

With sections a month away, what work can be done between then and now certainly will go a long ways for the end result of the Chaska/Chanhassen swim season.

"The beginning of the season was more about technique and now more aerobatic, building our endurance up. It's a grind, especially those Saturday practices. Sometimes we practice before meets. It's tiring. But it's definitely worth it for what's ahead. I love it," Brennan said.