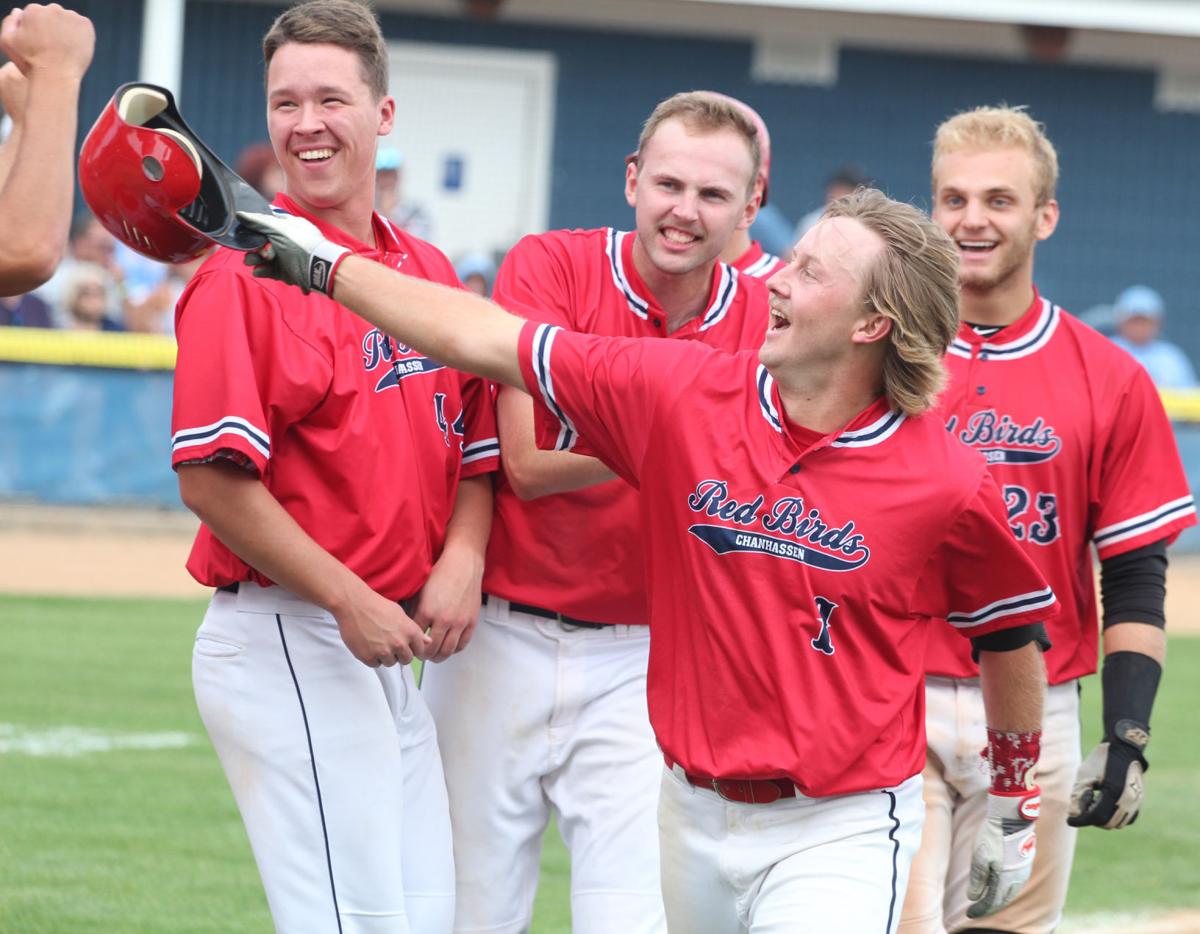 Brandon Arnold celebrates with Chanhassen teammates after hitting a two-run homer over the trees in left field at Shakopee’s Schleper Stadium. The blast gave the Red Birds a 4-3 lead. 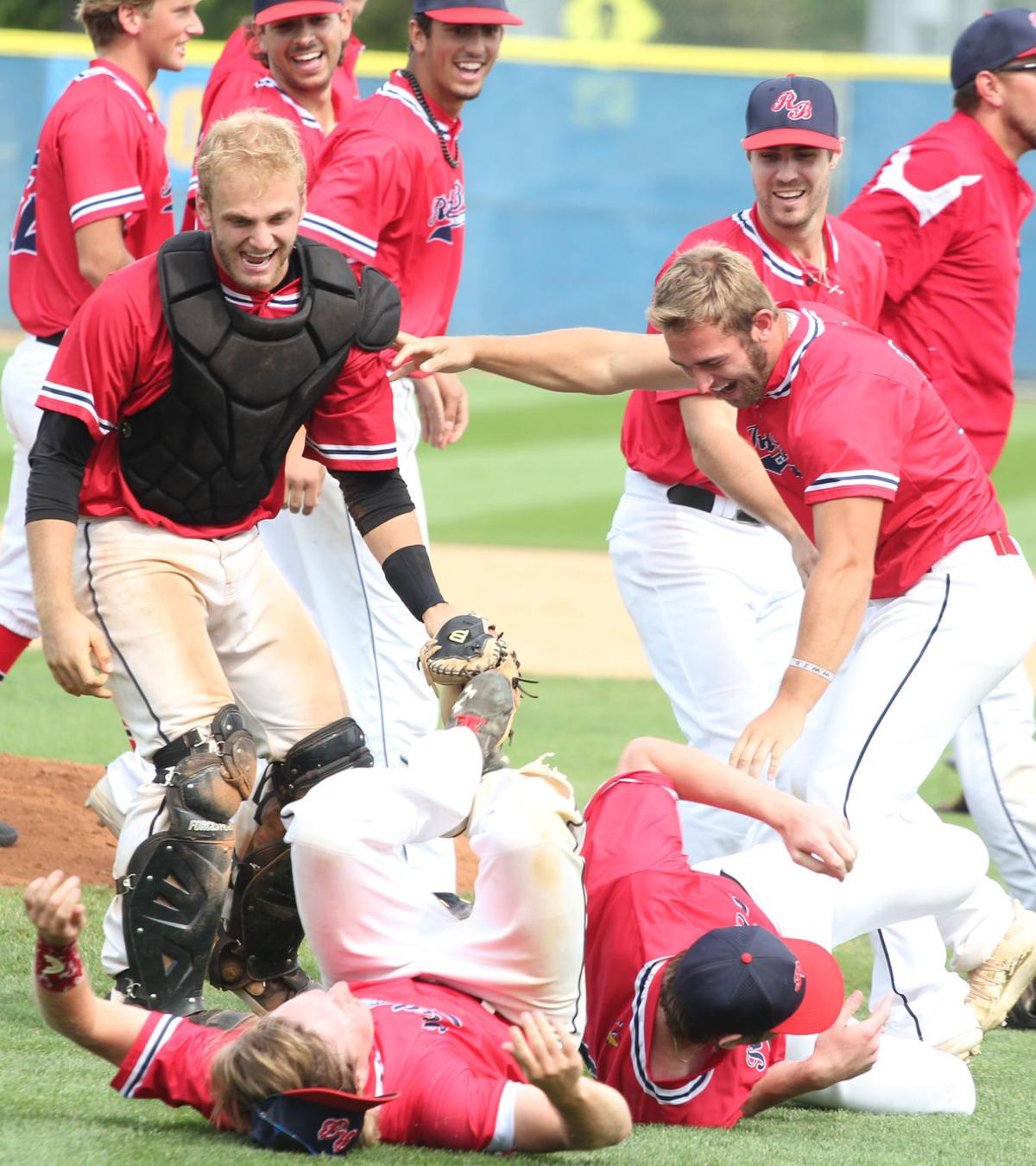 Brandon Arnold and Miles Nablo crash to the ground in celebration following the Chanhassen Red Birds’ third consecutive Class B State title on Sept. 6 in Shakopee. Ben Livorsi and Derek Smith certainly are enjoying the moment as well.

Brandon Arnold celebrates with Chanhassen teammates after hitting a two-run homer over the trees in left field at Shakopee’s Schleper Stadium. The blast gave the Red Birds a 4-3 lead.

Brandon Arnold and Miles Nablo crash to the ground in celebration following the Chanhassen Red Birds’ third consecutive Class B State title on Sept. 6 in Shakopee. Ben Livorsi and Derek Smith certainly are enjoying the moment as well.

The dobbers were down in the Chanhassen dugout. Trailing 3-2 in the eighth inning, 14 consecutive Red Bird batters sent down, a second Class B State Amateur Baseball championship game looming Sept. 6, a jolt was needed.

The 2015 Chanhassen High School graduate, back spasms so bad in the winners bracket final two days earlier he was only able to bunt — reaching base twice — found a 2-1 pitch to his liking. A double to the wall in left-center.

Life in the Red Birds dugout. Chris Choles, the pitcher, asking first-base coach Miles Nablo if he should go warm-up just in case of a Brandon Arnold home run.

Arnold was way out in front of pitch one, a pop fly over the grandstand. It brought a statement of “let it get to you” from a teammate in the dugout.

Arnold, 0-for-3 in the game, a strikeout, ground out and pop out, adjusted. A steady diet of offspeed pitches from Moorhead starter Cole Christensen, Arnold sat on one pitch. That one pitch landing way, way ... yes, way over the left-field fence.

“That was sweet. I honestly can’t describe it,” Chanhassen catcher Ben Livorsi, a Minnetonka High School graduate back on the team for the first time since the summer of 2016. “I think we were at an all-time low. We knew we had two at-bats left. Brandon came up and just crushed it. It’s something you’ll always remember.”

“I was sitting curve ball. He had thrown me a bunch throughout the game. He did and it wasn’t where he wanted to locate it. I put a good swing on it,” Arnold said. “(Michael Jurgella) were talking earlier. When you sit on a pitch and you get it you tend to get all jacked up and you lunge a little bit. So it was about getting back to the basics, trusting in myself. I was able to put my best swing on it on the third pitch and it kind of took care of itself.”

Arnold, the true Red Bird, the heart and soul of Chanhassen’s Class B revival, the producer of the game-winning hit in a 2-1 win over Miesville Aug. 30, assumed managerial duties from Mike Ralston and his dad, Mike.

Arnold, the leader all of the Red Birds would follow.

Twenty-four wins in 25 games in 2020. The lone loss coming in 5 1/2 innings to Eagan in Hampton early on. Twenty-three wins in a row to end the season.

When looking back at the three titles — the first two won through the losers bracket, two Labor Day wins needed in 2018 and 2019 for Class B title — the 2020 championship might have been the most impressive.

The final four teams — Chanhassen joined by Moorhead, Cold Spring, and Miesville — epitomize Class B baseball in Minnesota. One of the four teams in the championship dating back to 2012.

So to go 5-0 at state, beat the likes of Northfield, Miesville and Moorhead twice over three days, Chanhassen is officially the goat. The first three-peat champions in Class B.

“It never gets old. I won a conference championship my first year at St. Louis (University) and then the following summer in Jamestown. You never get tired of winning, being the best in something,” Livorsi said.

Down 1-0, Chanhassen took its first lead in the fourth inning. After an infield single from Michael Jurgella, Zach Hoffmann connected on a RBI-double to the left-center fence to tie the score.

After a fly ball from Livorsi advanced Hoffmann to third base, Aaron Kloeppner, one of four all-tournament members along with Arnold, John Straka, and Thompson, hit a two-strike ground ball to shortstop to give Chanhassen a 2-1 lead.

Moorhead, runner-up at state in 2015 and 2016, tied the game in the sixth inning on a Denver Blinn run-scoring double and a two-out RBI-single from Spencer Flaten in the seventh.

The go-ahead single chased Thompson, who was making his second state championship start despite being 20 years old (2017 versus Miesville). The right-hander was charged with two earned runs and six hits allowed with two strikeouts.

Christensen, who pitched in relief in the first game of the weekend with Chanhassen, had the Red Birds on the ropes, a pop out and strikeout to start the eighth inning.

Smith, who sailed a fly out to the warning track earlier in the game, doubled on a 2-1 pitch, setting the stage for the Arnold heroics.

“It’s definitely a fun feeling. It’s why you play baseball. It’s why, even at our age, we’re out here doing this for fun. That makes it all worth it. Credit to Nick, hits a double with two outs, hasn’t really been able to swing a bat all tournament because of his back. He guts it out and got us going,” Arnold said.

Nablo pitched a 1-2-3 ninth inning, a pair of strikeouts and a diving catcher on a liner in center field from Smith, to clinch the championship celebration.

“You kind of let Straka ride as much as possible. Make minimal mound visits because he knows what he’s doing. He has a plan. I call a pitch and give him suggestions. Sometimes he shakes me off, comes in the dugout and asks me what I’m doing,” Livorsi said. “With Thomas we mixed pitches to hitters early, we tried to have a plan. His fastball was good today. We made things work. He gave us a chance to win.”

Straka, with a 3-0 record at state (11-0 on the summer), was named the 2020 Class B State Tournament Most Valuable Player, his second consecutive individual award.

“There’s still seven or eight of us St. Cloud guys. It’s a blast to come to the yard with them, and continue to do what we love to do,” Arnold said.

It was the first state championship since 1959 for Fairmont.

Local squad Carver was beaten 14-3 in the third round on Sept. 5 by St. Patrick. Cologne draftee Christian Johnson, an all-tournament team selection, struck out 19 batters, throwing 214 pitches in a Sept. 6 win and relief stint later in the day.