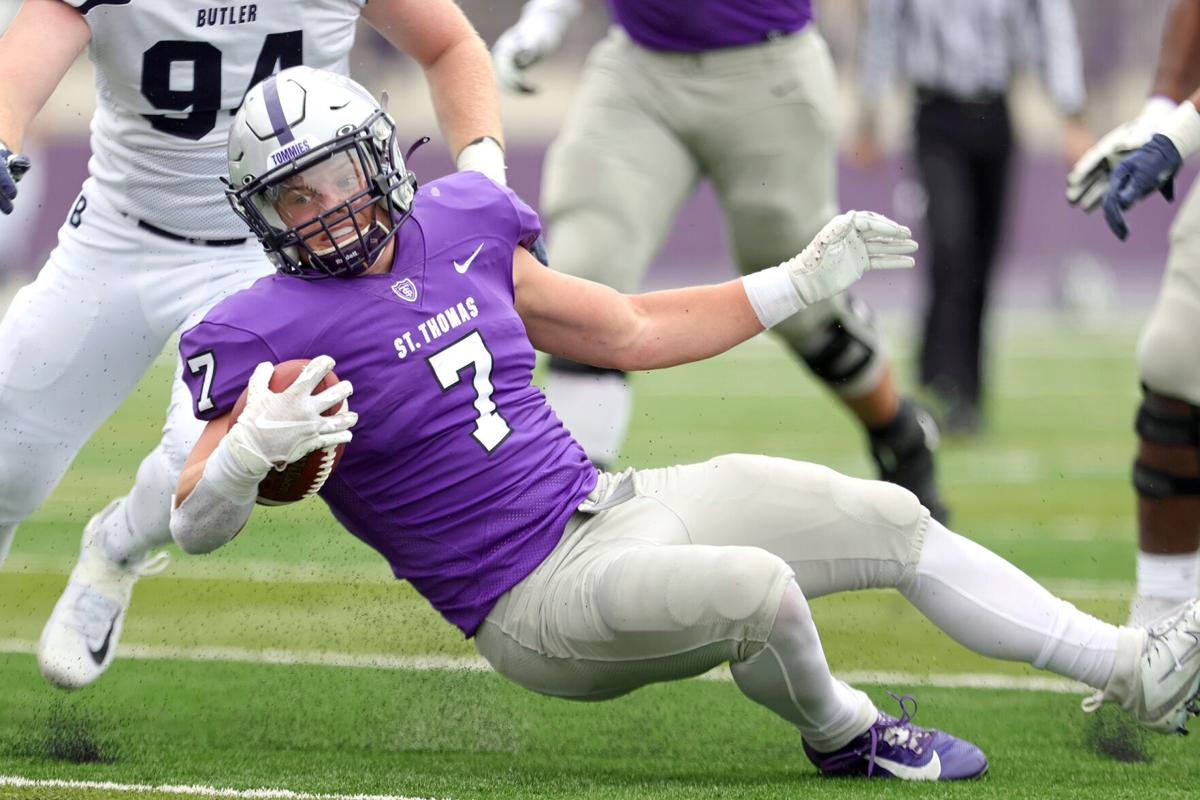 University of St. Thomas running back Tom Loeffler, of Victoria, crosses the goal line for the opening score in a home win over Butler University on Sept. 25. It was the Division I home debut for the Tommies. 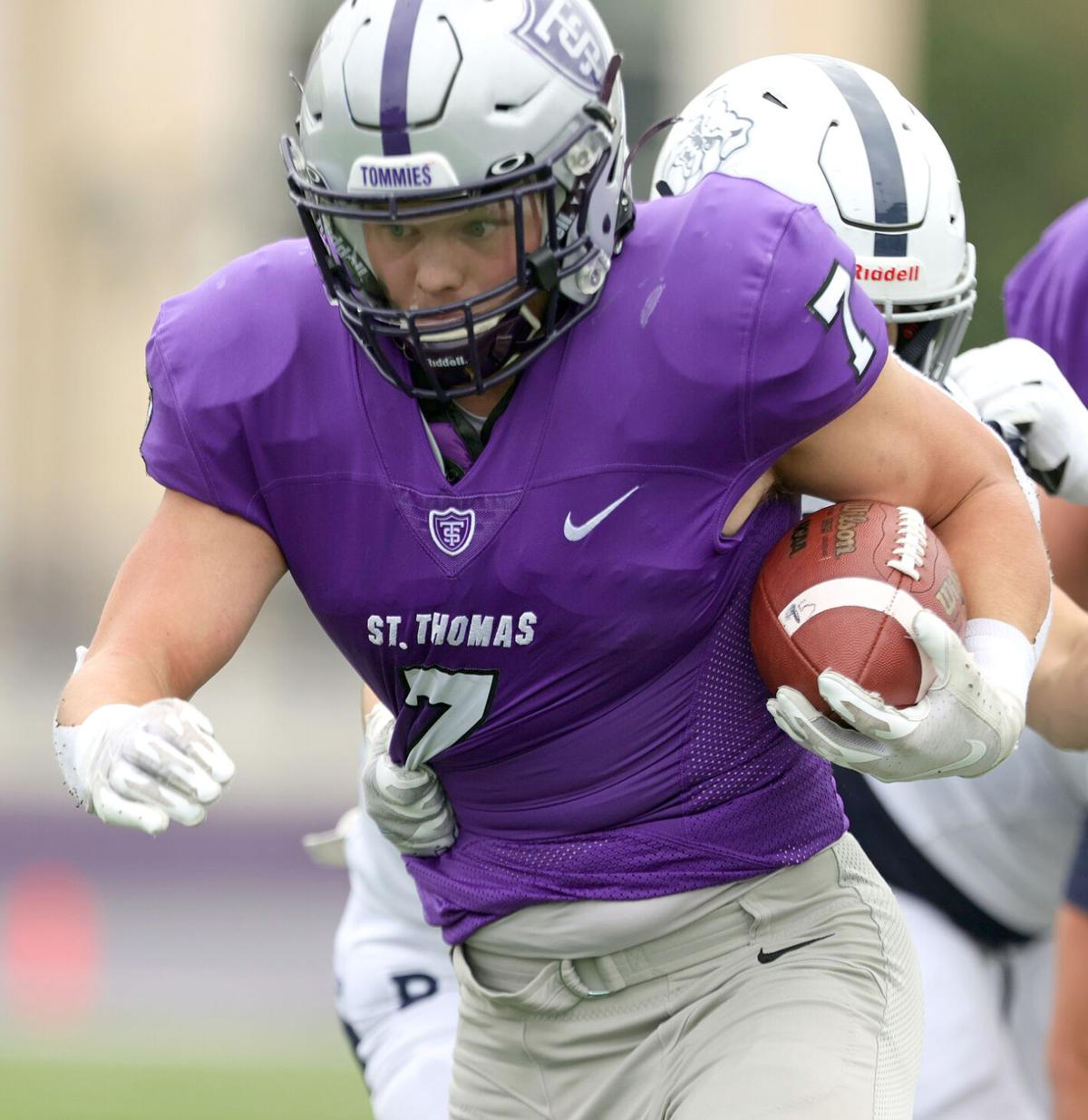 Tom Loeffler, a 2017 Chanhassen High School graduate, has been on the field for the University of St. Thomas since Day One, first starring on special teams, and now as a senior starting at running back.

University of St. Thomas running back Tom Loeffler, of Victoria, crosses the goal line for the opening score in a home win over Butler University on Sept. 25. It was the Division I home debut for the Tommies.

Tom Loeffler, a 2017 Chanhassen High School graduate, has been on the field for the University of St. Thomas since Day One, first starring on special teams, and now as a senior starting at running back.

Tom Loeffler rushed for more than 800 yards as a senior, a total of 10 touchdowns between carries and catches for Chanhassen High School in 2016.

The Storm a perfect 8-0 in the regular season. The Storm set a program-record with nine wins that season; ultimately beaten in the section championship by Mankato West.

College coaches were not beating at the door to offer Loeffler a scholarship.

After drawing some interest locally, Loeffler eventually committed to the University of St. Thomas in February 2017, a Division III program at the time. An opportunity to extend both his athletic and academic career into college.

Fast forward four years and Loeffler has become the Tommies' Touchdown Tommy. In three-plus seasons, he has 18 total touchdowns, 16 rushing, and two on punt returns.

Loeffler has amassed more than 1,100 yards on the ground and 2,343 all-purpose yards when including catches, and kick-off and punt returns.

He's also now a starting running back for a Division I program.

"I definitely didn't envision ever having a Division I college career, but I've had just about every which way happen to me here, gotten a taste of everything, so why not," Loeffler said. "Having my super senior year playing D1 ball, it's a good way to cap things off."

The University of St. Thomas did something very few college insituitions do. They made the jump from Division III to I, leaving the Minnesota Intercollegiate Athletic Conference, ending long storied rivalries in becoming only the second in-state school to have Division I athletics across the board.

While most of the Tommie programs were admitted into the Summit League, the football program begins its journey in the Pioneer League, a non-scholarship conference with 11 schools that range in enrollment from 2,000 to 11,000.

Some of the schools are household names -- Butler, Davidson, Dayton, Valparaiso -- mainly because of their basketball programs.

"Yeah, those (MIAC) games were super fun. Tommie-Johnnie. It's hard to beat it. It's been different riding in a bus for seven hours to play at Michigan Tech. That's longer than any other trip we've ever made. Playing at Northern Iowa, in a dome, that was crazy, too," Loeffler said.

St. Thomas heads to San Diego this Saturday, to Florida on Oct. 16 and North Carolina in November. It's hard to complain about those destinations.

"I was for sure coming back," said Loeffler about a fifth season after the 2020 schedule was cancelled. "I couldn't have my last season be a bunch of scrimmages. This is a great opportunity to finish out my career with the team. I'm blessed to have this chance."

When you have a player such as Josh Parks, All-American, conference player of the year, ahead of you on the depth chart, you best find another way to get on the field.

That's what Loeffler did as a freshman in 2017.

While he rushed for 162 yards on 25 attempts -- mainly late in blowout wins -- he contributed in other ways. He returned some kicks and he handled punt returns, his first collegiate touchdown on a 75-yard return against Hamline University.

The Victoria native scored on special teams in each of his first two collegiate seasons. Not bad for a guy who returned one kick, and one punt, both against Chaska, in his senior year.

"Really, I think it had a lot to do with playing baseball. I played a good amount of center field. Understanding how to track a ball into the gaps. It's hand-eye coordination more than anything. Understanding the spin of the ball," Loeffler said.

After scoring 13 touchdowns and almost 900 rushing yards in 2018 and 2019, playing behind Parks, Loeffler is getting his first chance at starting. He found the end zone twice Sept. 25 in the first-ever home Division I football game in St. Thomas history.

A game that was played in front of a capacity crowd of more than 5,000 fans at O'Shaughnessy Stadium.

While there are a number of new faces, new staff in the program, with the jump up in division, Loeffler said the process remains the same. It always will be under coach Glenn Caruso.

"He runs a tight ship. We're the same team, the same us, the same St. Thomas. We control what we can control. That's developed each and every day in our program. Really, being the best that we can be. The best versions of us. The best St. Thomas we can be," Loeffler said.

The next St. Thomas home game is Saturday, Oct. 9, at 1 p.m. against Valparaiso University. All Tommie games, road and home, can be heard on AM 1500 SKOR North.

The University of St. Thomas football team has a number of former Chaska and Chanhassen athletes on its roster.