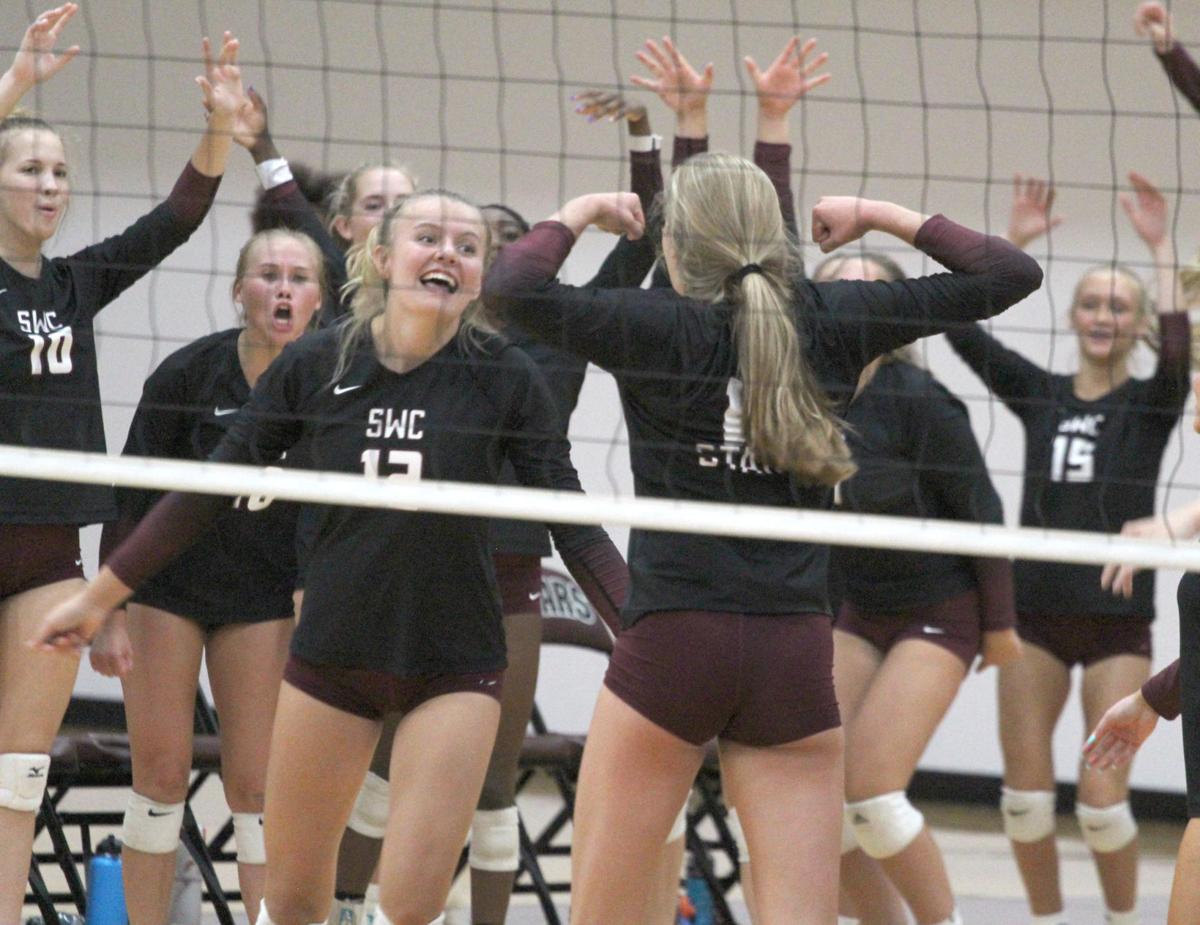 Este Haugen flexes the muscles toward senior teammate Paige Lemkuil, who in return did the same, after a block went for a point for Southwest Christian in a Sept. 9 match with Eden Prairie. 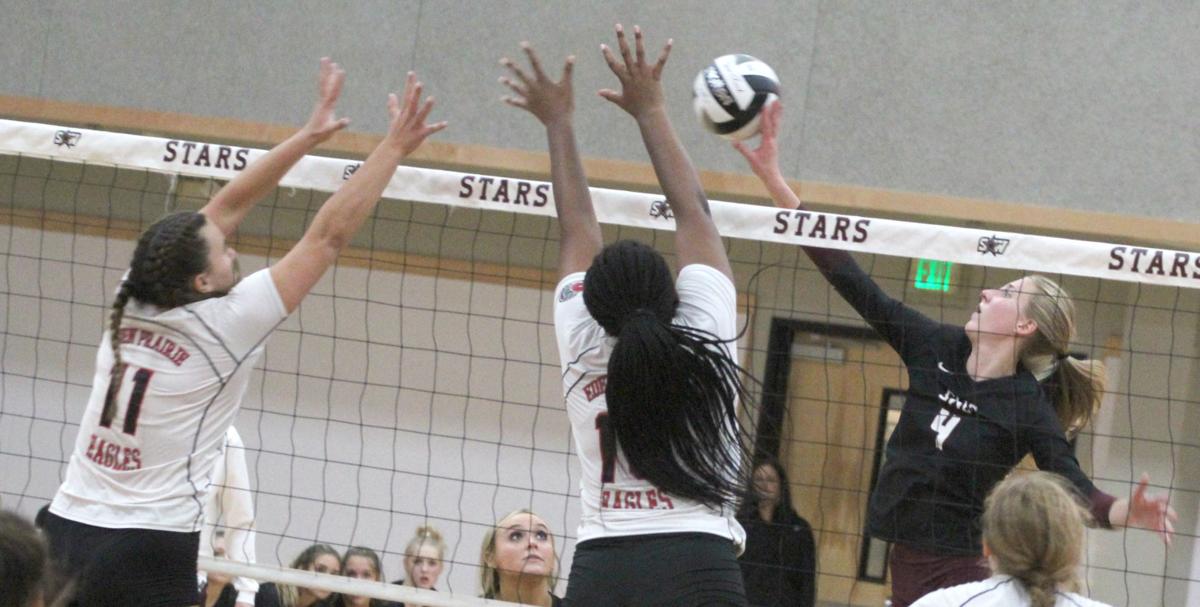 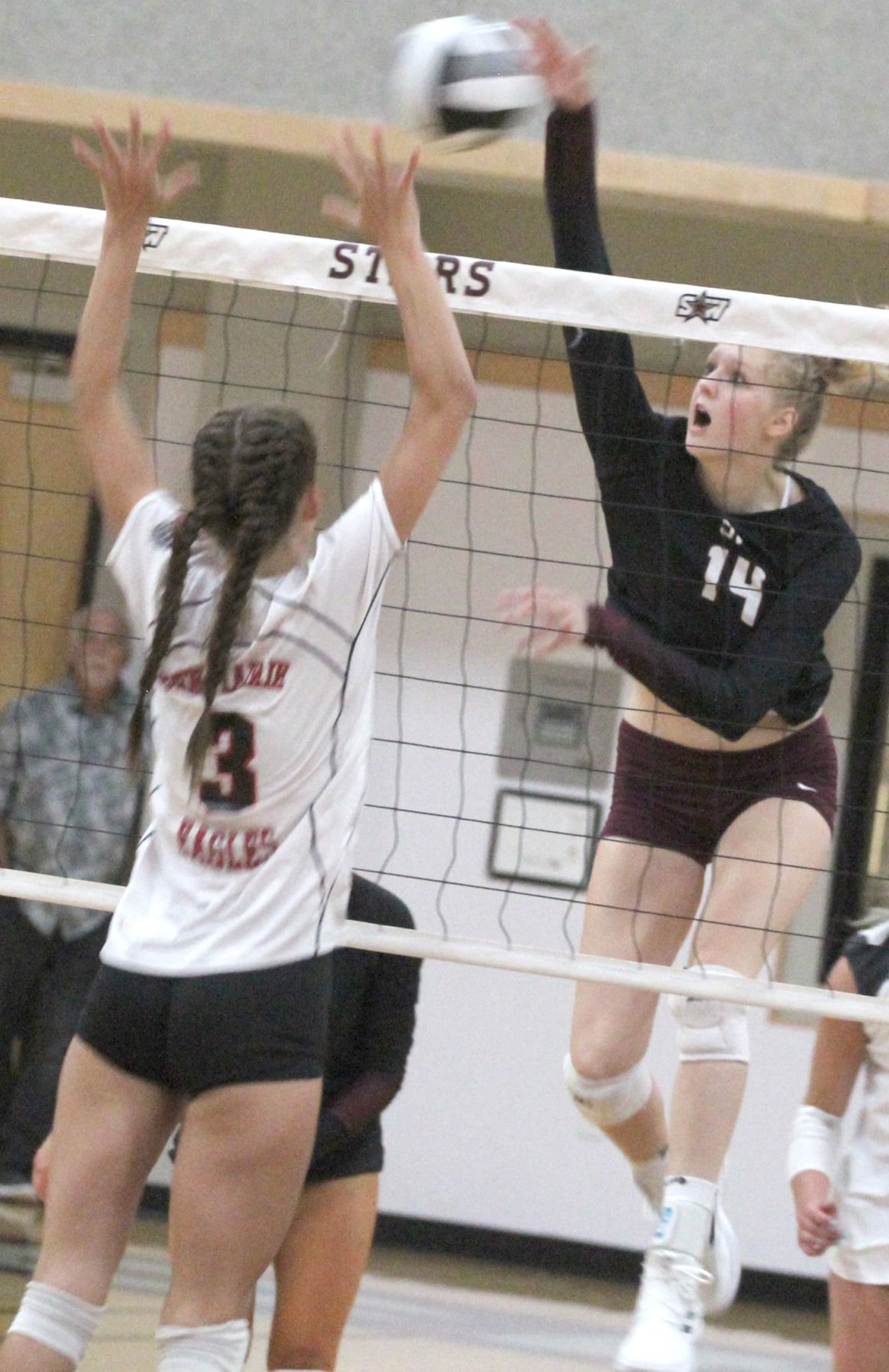 Annika Veurink was the star of the fourth and fifth games for Southwest Christian, controlling the net in a 3-2 win over Eden Prairie on Sept. 9. 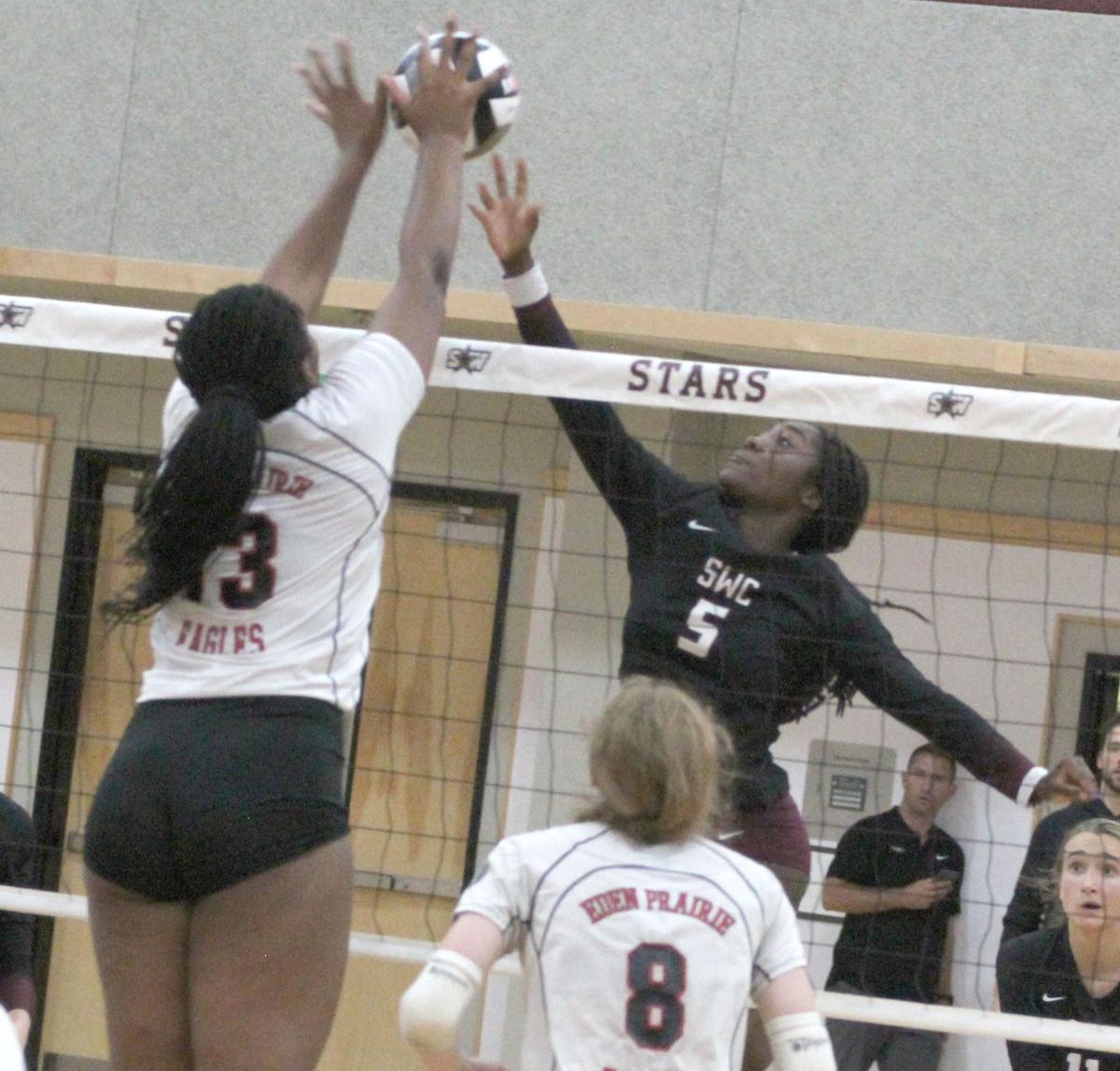 Callie Coughlin of Southwest Christian was 1-on-1 with Eden Prairie's Kendall Minta.

Este Haugen flexes the muscles toward senior teammate Paige Lemkuil, who in return did the same, after a block went for a point for Southwest Christian in a Sept. 9 match with Eden Prairie.

Annika Veurink was the star of the fourth and fifth games for Southwest Christian, controlling the net in a 3-2 win over Eden Prairie on Sept. 9.

Callie Coughlin of Southwest Christian was 1-on-1 with Eden Prairie's Kendall Minta.

Estelle Haugen, with a wide open mouth, approached teammate Mehlayna Straub following a solo block in game four. She gave her a friendly nudge. Straub responded with a large smile. Haugen came back with a "are you kidding me" look.

The scene played out at various points of the fourth and fifth games Thursday for Class AA No. 1 Southwest Christian. Every big point, turning points, brought out excitement and celebration from Haugen, a committed Division I hitter.

And none came after something she finished. It was a big swing, a big block, a big dig, from a teammate.

It's why likely everyone, from players on her team to her friends to her fellow triplet brother Isaac, kept calling for Este, her nickname, after the Stars took down top-class Eden Prairie in five games in a thrilling match that packed the gym.

Former Eagle and Minnesota Gopher Sarah Wilhite, a part of the USA Volleyball program, was part of the crowd, watching it all unfold in a playoff-like atmosphere early in September.

"I think we really focused on team effort. We're not six individuals out there. When we play as one, when we lean on each other, that's when things click," Haugen said. "We have so much talent out there, the whole front row, we're going to find a great hitter. That's why it's so hard to play us. The ball could go anywhere, and having that trust, for our setter to know that she can count on us all, it's so huge for us."

Haugen, a standout for Northern Lights in the club season, has been a starter since Day One as a freshman at Southwest Christian High School. She's developed into an all-around talent, never leaving the court.

Her back row passing and receiving match her skill set upfront at the net.

Haugen is among a handful of Minnesota seniors set to attend the 2021 USA Volleyball National Team Development Program fall training series on Sept. 17-19 in Columbus, Ohio.

Teams know who she is. Teams know they have to slow her down.

"I love that. The bigger the challenge the better. If they want to put three up on me I'll find a way, or my teammates will, too," Haugen said.

Southwest Christian, the top ranked team in the double-A in the new four-class volleyball system, has already seen two top class opponents in Lakeville North and Eden Prairie. They bested top-10 3A Kasson-Mantorville in five games as well.

But to beat a program such as Eden Prairie, one of the biggest schools in the state, some of the players former teammates, felt large.

And the super fans from Southwest Christian High School agreed when the final point hit the ground. A good portion of the 465-member student body rushing onto the floor to celebrate.

2A Southwest Christian 3,
4A Eden Prairie 2
15-13 in game five pic.twitter.com/ZTe7HDSPVa

"We asked for the hardest schedule and that's exactly what we got," Haugen said. "Going into the game we had the confidence, we knew we could do it, but to go out there and execute it was super huge."

Down a game, 25-22, Southwest Christian evened the match on a Callie Coughlin tip kill at 25-23. While the Eagles responded 25-18 in the third game, the Stars remained poised.

Following a timeout down 10-9 in game four, Southwest Christian scored nine of the next 10 points, sending the match to five with a slide pass and kill from Annika Veurink.

Veurink came up big in the fifth set as well, giving the Stars consist offense along with Coughlin. Southwest Christian, it seemed, outpointed Eden Prairie when Haugen was in the back row.

Back-to-back hitting errors from Eden Prairie concluded the match. Veurink, laying on her back, in disbelief as teammates poured on the court with Haugen pumping her arms out in excitement right in the middle.

A setting straight out of a section championship match.

"They are the best fans. For sure. They are here every night, cheering us on. Coming off a year with no fans, which was super weird, having them here, making that noise, they pushed us, and I really appreciate what they do for our team," said Haugen of the super fan section.

While playing at the University of Georgia is in the near-future for Haugen, this season, her final one at Southwest Christian, is about going out in a large way. Maybe a state championship.

For that to happen it will take the support of all 15 Stars on the roster. And Thursday's victory showed that. Together, they are amazing.

No other information was available.