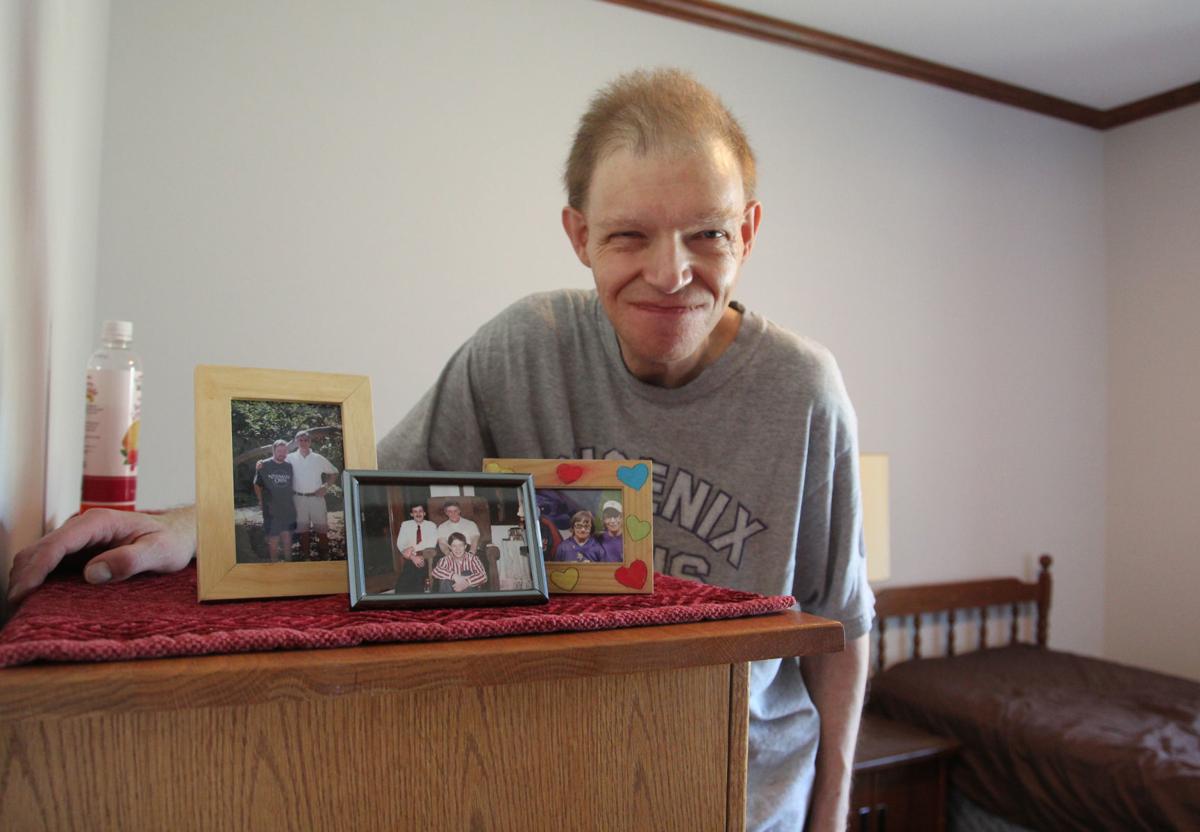 John Pieri was arranging family photos in his own bedroom at his new home in Victoria. 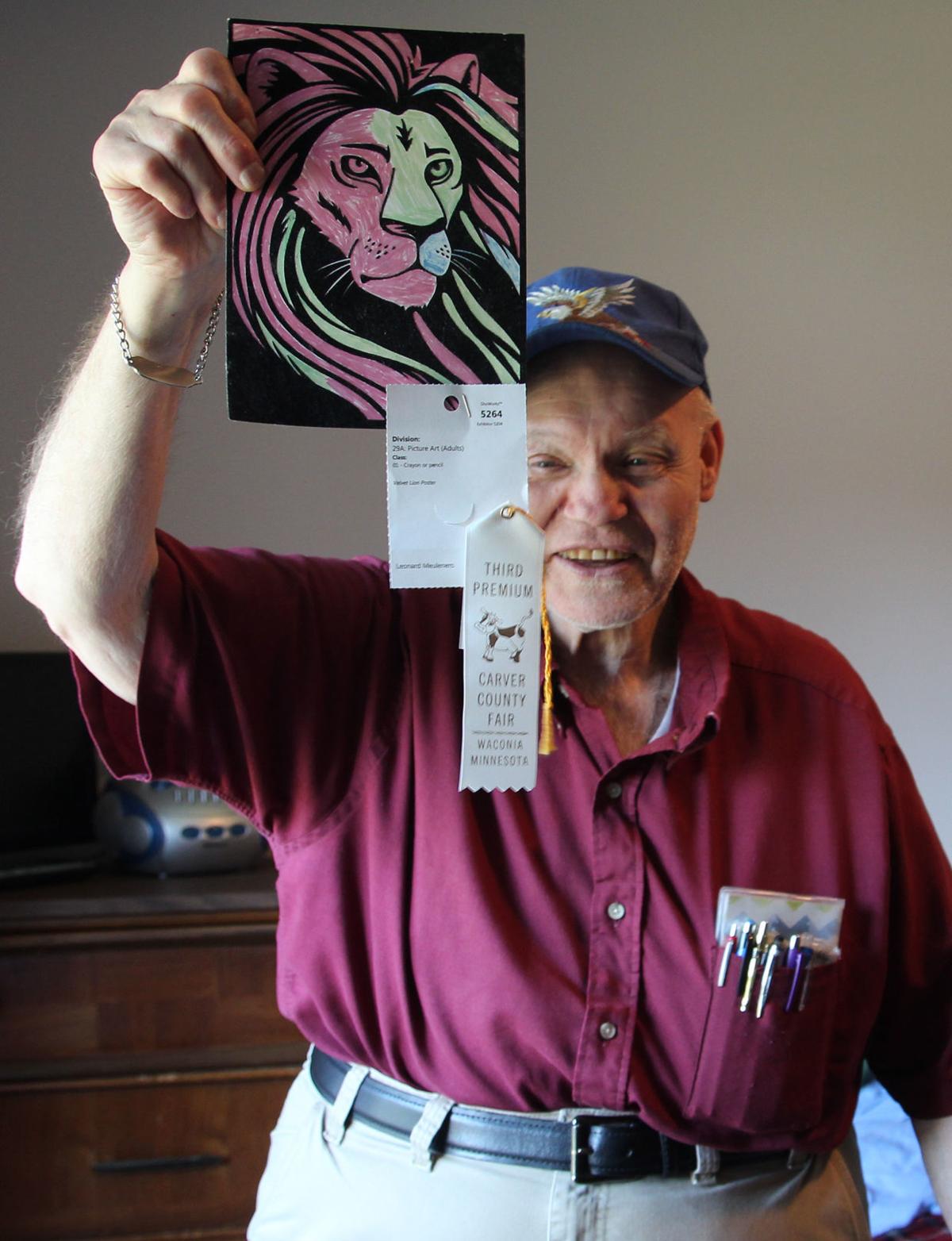 Lenny Meuleners unpacked a box of treasures including his ribbon-winning artwork which will find a home on his bedroom wall. 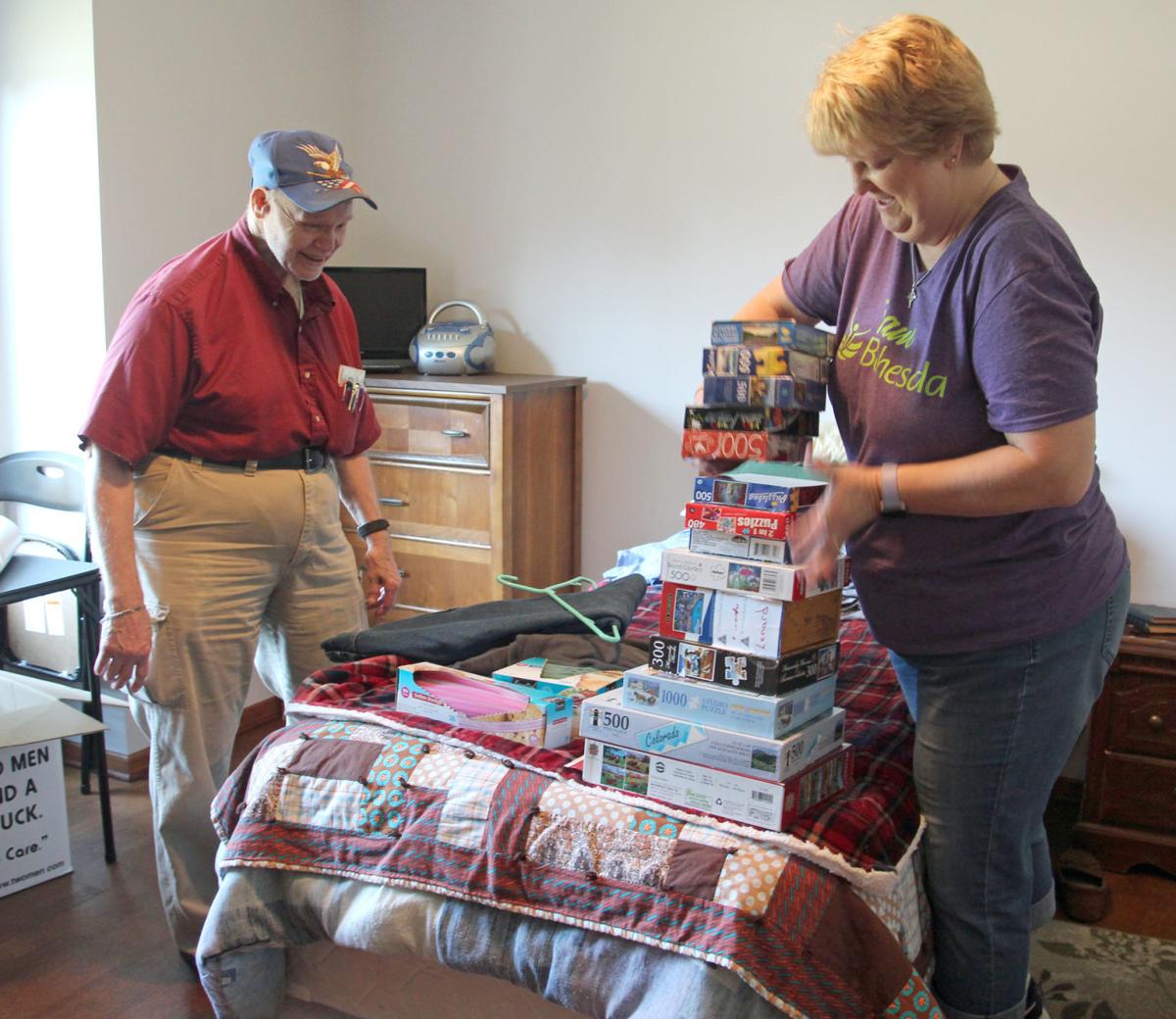 Lennie Meuleners and Angie Feneis, program manager at the new house unpack and sort his belongings. 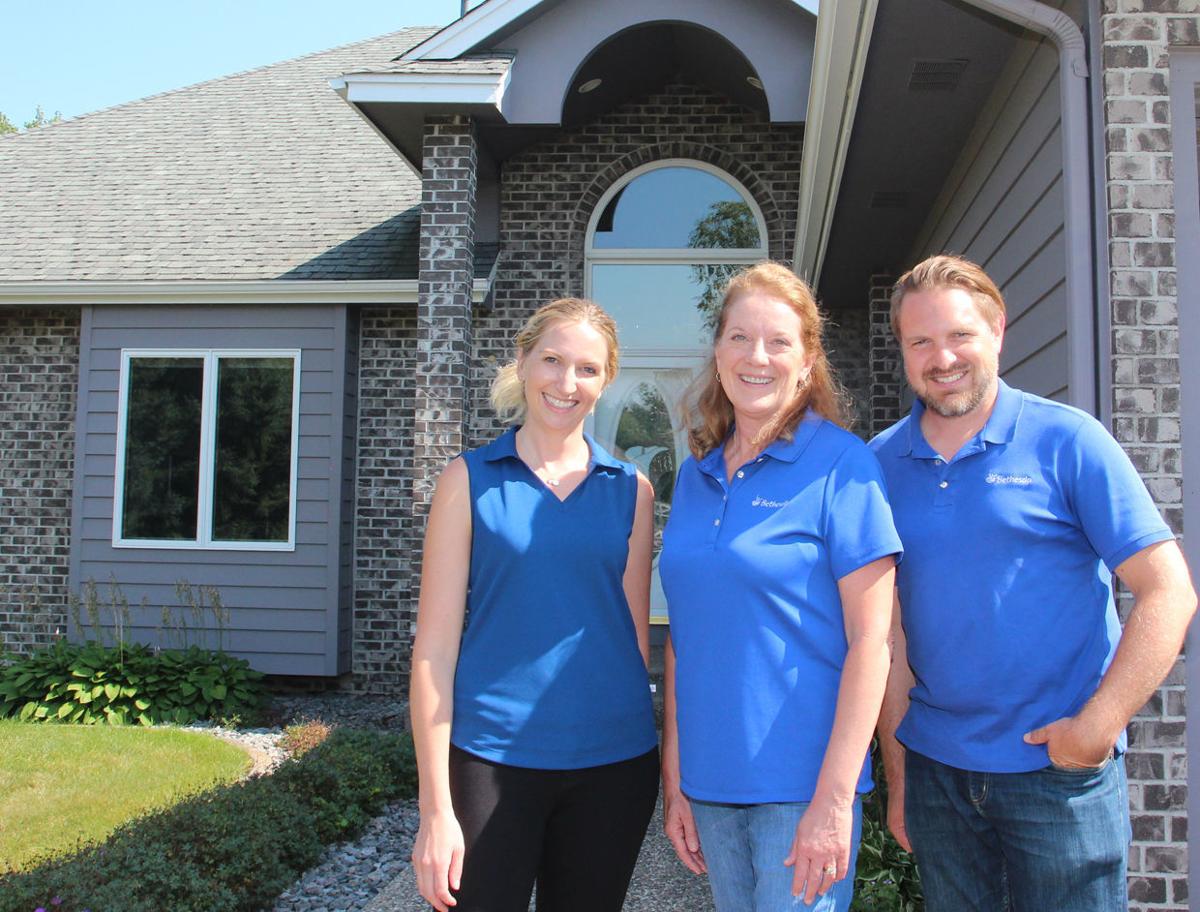 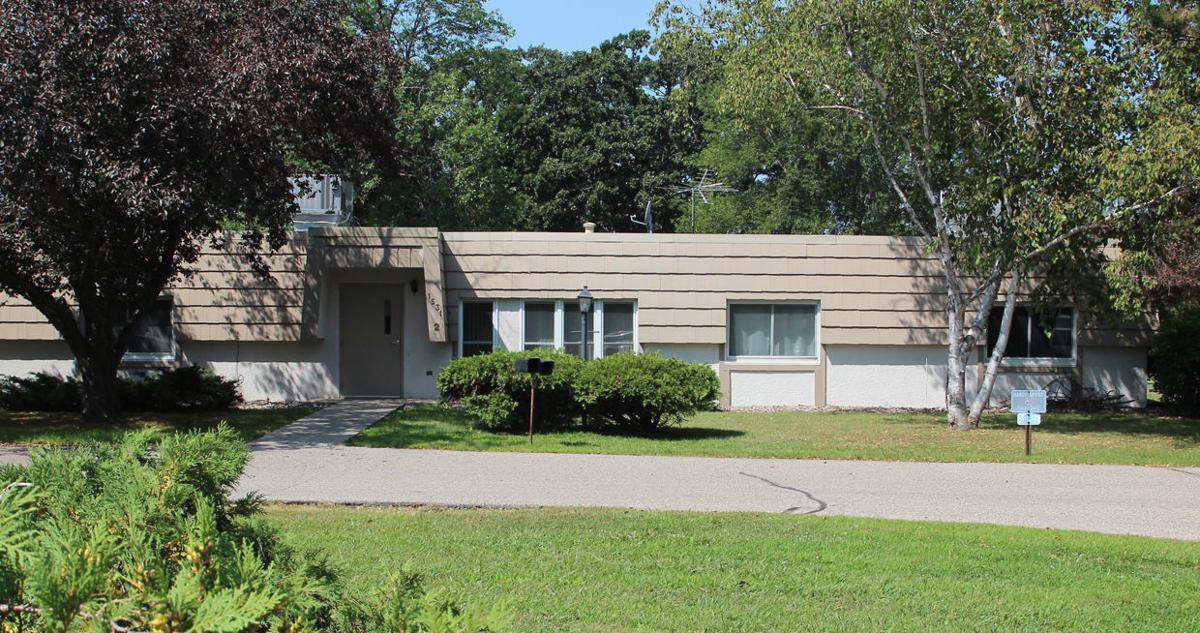 The Bethesda campus at 1600 Arboretum Blvd., Victoria, will eventually be redeveloped. 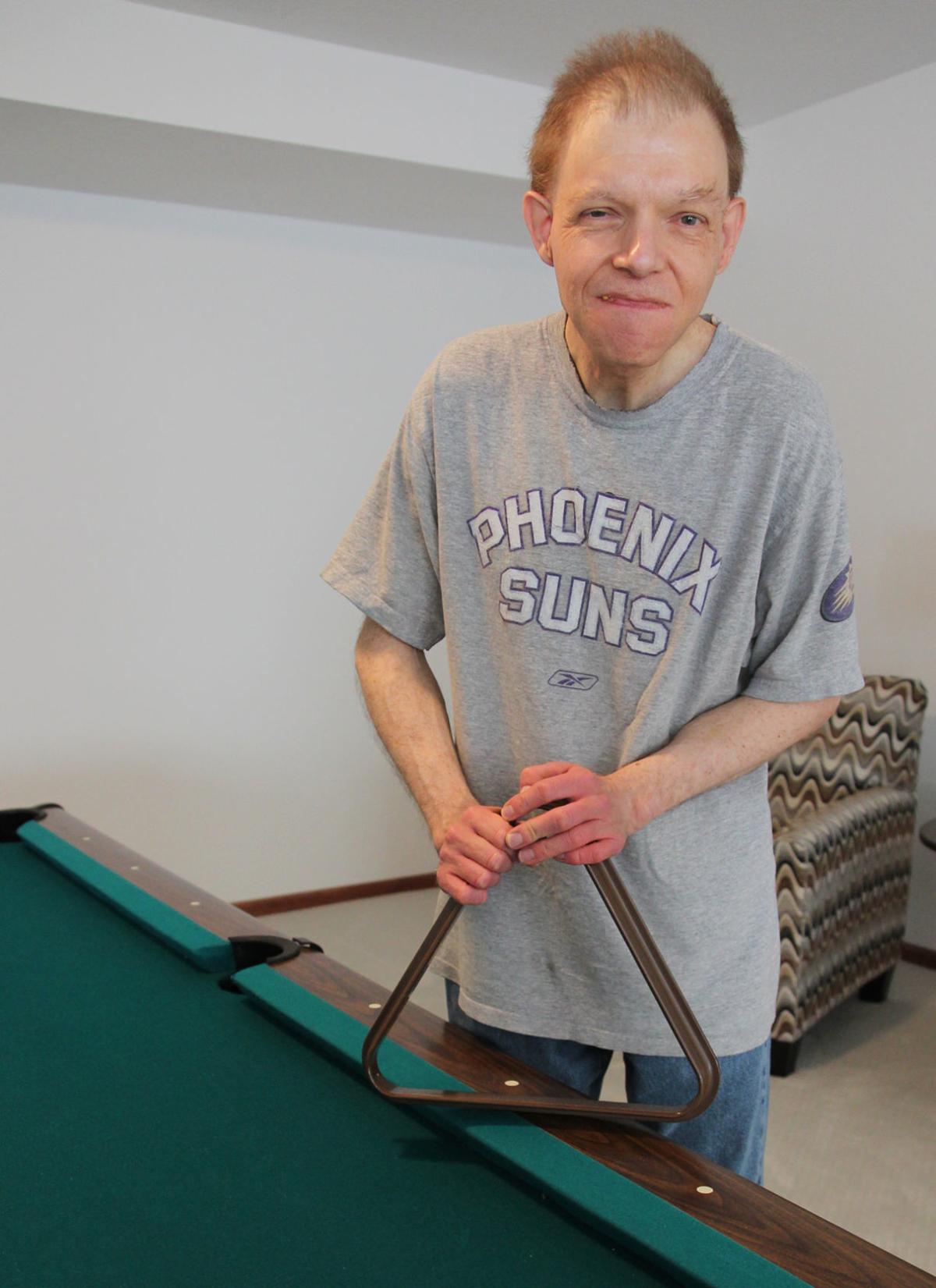 John Pieri enjoys pool and will now be able to play anytime he wants in his new home’s rec room. 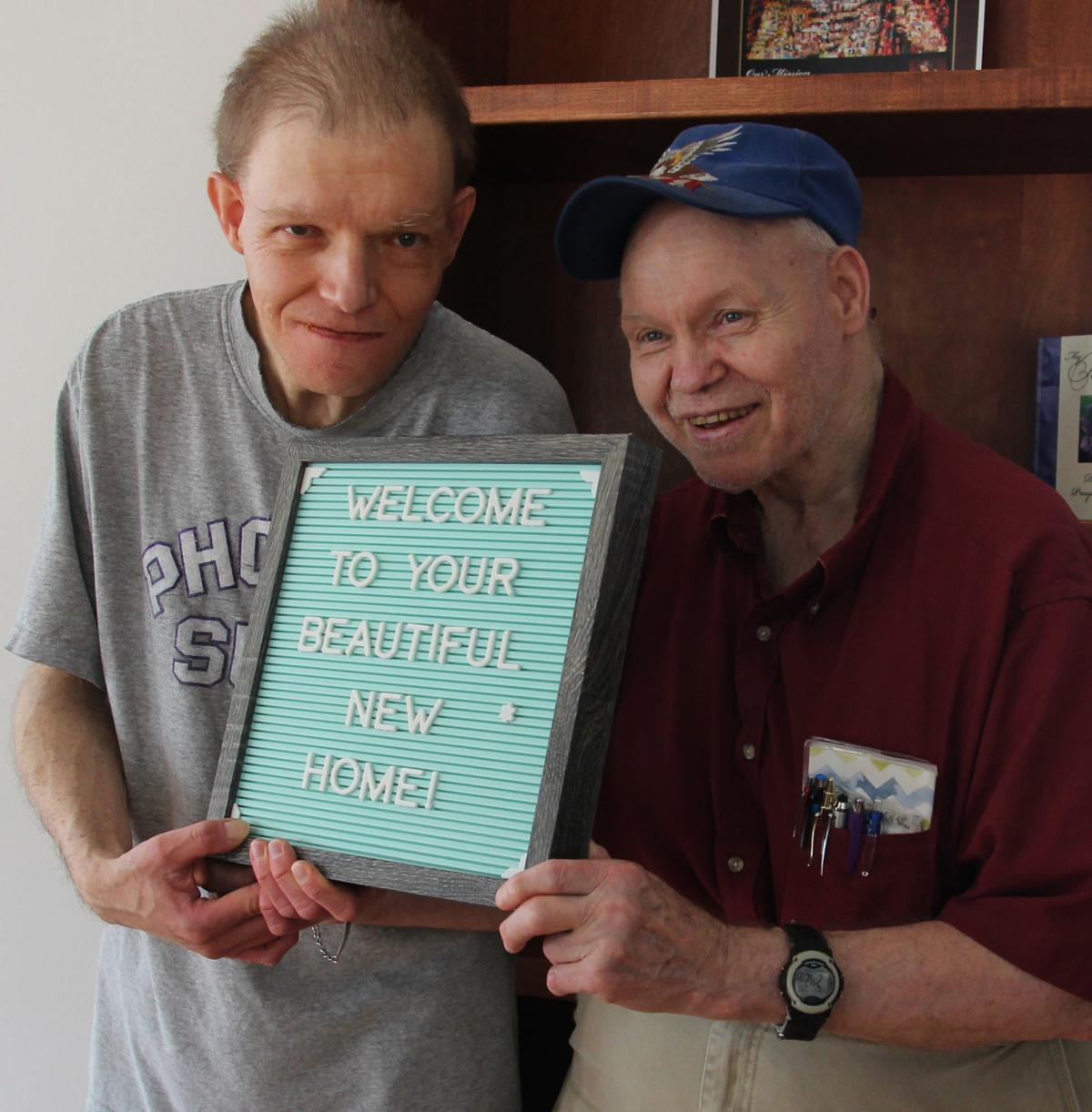 This welcome sign greeted John Pieri and Lennie Meuleners at their new home. 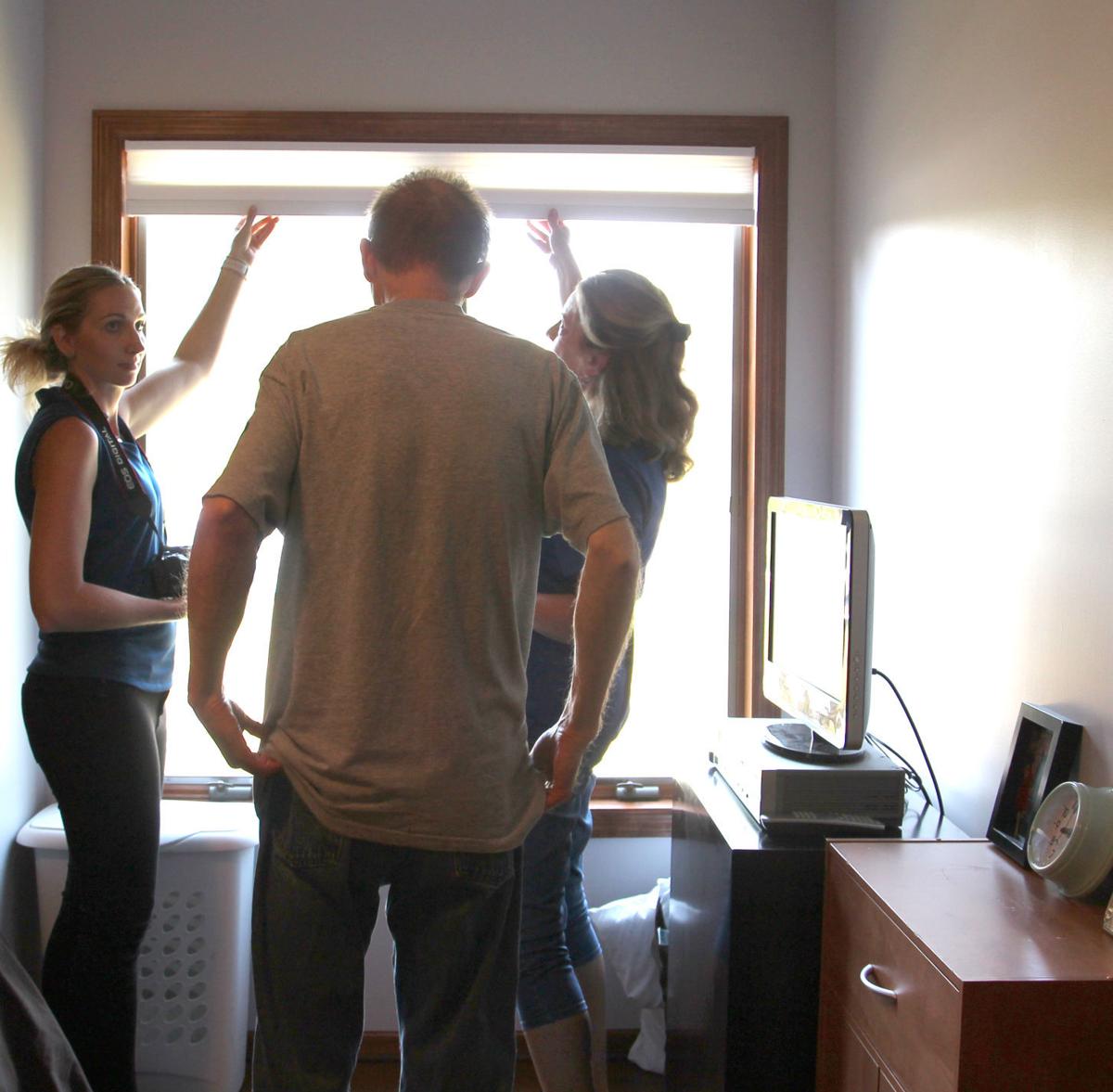 John Pieri learns how to work the window shade in his room.

John Pieri, 49, is a self-described minimalist, and from the looks of his tidy bedroom, you wouldn’t know he’d just moved in earlier that day. His clothes are unpacked and hung in the closet. Shoes are lined up in a row below. He’s already arranged framed family photos of himself and his family on the dresser and nightstand. One of the photos shows him in a tux with a pretty girl, taken in 1989 at his high school prom. A small flat screen TV has a home on a small table at the foot of his bed. And the room features a nice big window with an adjustable shade. He’s looking forward to learning to operate it on his own.

Down the hallway, just around the corner, Lennie Meuleners, 73, is unpacking his boxes with helpful assistance from Angie Feneis, a program manager. His table holds a variety of prized treasures including a trophy fish.

Pieri and Meuleners are two of the four men that just moved into their new licensed group home in the Swiss Mountain neighborhood in Victoria last week, from the Bethesda Lutheran Communities residential campus at 1600 Arboretum Boulevard. Bethesda is a Christian non-profit organization, based in Milwaukee, Wisconsin, that provides homes and other services for people with developmental disabilities. The Victoria campus was originally built in 1971, on 4-1/2 acres, next to Victoria Lions Park. Three of the homes have a 12-bed capacity; the fourth has room for six.

“But Bethesda is actively diversifying,” said Monica Schmidt, Bethesda regional director. During a break during last week’s move-in, Schmidt described how care for the disabled has changed over time.

“When campuses like the one in Victoria were built in the 1970s,” Schmidt said, “they were considered state of the art. Before that time, people’s choices were either living at home with their families or living in state institutions. That changed to the residential campuses model like the one in Victoria. And now, we’re moving into a totally different experience where residents live in homes.”

Schmidt said clients are living in smaller settings and are much more integrated into their communities. They are adults, she said, and their care is an evolution of a person-centered planning process. “The person drives how they want to live their lives,” Schmidt said. “There are wider options along with their support systems, their families, legal guardians. They have more choices in how they want to live.”

“And when we come into a neighborhood, it’s not with a big splash,” Schmidt said. “We just want to be very good neighbors.”

Pieri and Mueleners, Steve Schneider and a fourth housemate were settling in by early afternoon of the move.

“They all knew that this was going to be happening,” Schmidt said. “There’s been a wide range of emotions. Our residents’ ages are from early 20s to 87. For those in their 80s, they’ve always lived in the Arboretum setting. But the gentlemen who’ve moved here, they’ve been excited and positive from the start.

“They’ve been out here a number of times and involved in selection of their furniture and furnishings. We’ve been to Kohls, Becker Furniture for dishes, home goods, lamps. They’ve been involved in all the processes.

“John has been very excited about the pool table,” Schmidt said. Pieri has his own pool cue and travel case, and has been known to visit Floyd’s and Vic’s Bar in Victoria, to play pool on some of his outings.

“Just the idea about having their own bedroom and closet, and they’ve always slept in twin beds,” Schmidt said. “Some have chosen full-size beds. The opportunity Bethesda is giving them is a tremendous blessing to be able to do.

“What is nice is that the team that worked on (relocations) have a long history with the people here. We know them very well, their likes, their dislikes. We’ve made it so their new homes are close to family and doctors and that housing match their priorities...Steve likes to be alone and can do steps, so he’s in the lower level bedroom...and some had requests, who they did and didn’t want to live with. And we gauge their compatibility, the people who are quieter, the ones that are noisier. Once we made the announcement about the moves, each resident had their own planning process with their support team.

A staff member is on site at all times; a second staff member facilitates trips to church, to doctor appointments, grocery shopping and entertainment. Each resident’s support team determines if they are able to get some alone time; if they have those capabilities. Schmidt pointed out it has to do with balancing dignity with risk, and “we never compromise an individual’s health and safety. But some autonomy affords them confidence,” Schmidt said, “if they need help, we make it safe for them.”

The group homes have access to on-call staff support, an on-call nurse and nursing support for direct care. Bethesda even has a full-time home maintenance employee. Some residents are able to prepare their own meals. “We have one person here who’s independent and particular about what he wants,” Schmidt said. “The others need some support. That’s true of daily living, too. There is no one right now who can go independently in the community but we meet them at the level of what they need and what they can do.”

“Once they settle in, they’re planning to have an open house with their families,” Schmidt said. “And while the residents will be in seven different homes, they’ll stay in touch.”

John Pieri lived in his own apartment in Arizona prior to moving to Minnesota in 2004 to be closer to his brother Tony. Pieri has worked at a variety of local jobs including Culvers and McDonalds. Currently, he volunteers at the Bethesda Thrift Store. He plays pool, and used to bowl and golf, real and miniature. He likes the Food Network’s “Diners, Dives, and Drive-Ins,” and is a Minnesota Vikings fan.

Meuleners grew up on a Watertown family farm and moved to the Victoria Campus in 1996. He likes ag magazines, listening to the pig and crop reports and what they are selling for on the market. He spends time with his family, fishing, smoking a few cigars and drinking a little beer. He is excited about his new home, and shopping for supplies.

Steve Schneider, 65, moved from his parents home to Victoria in 1985, and has lived at two of the homes at the Victoria Campus. Schneider has worked a variety of community jobs and currently works at CHOICE (DT&H) and isn’t planning on totally retiring any time soon. He likes to bowl, go to church, and out to eat.

"Before that time, people's choices were either living at home with their families or living in state institutions. That changed to the residential campuses model like the one in Victoria. And now, we're moving into a totally different experience where residents live in homes."