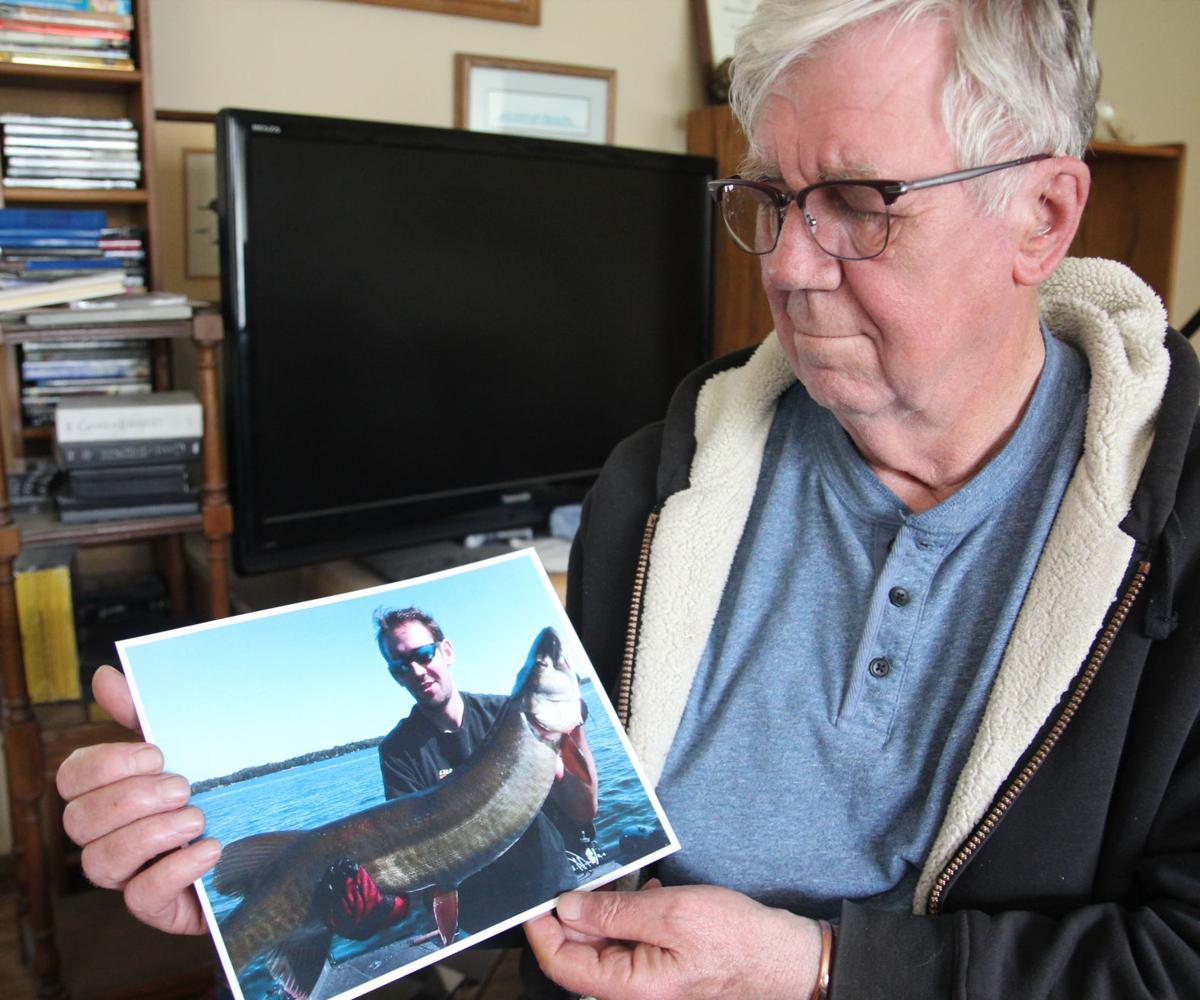 Dave Drealan recalled that fishing was one of his son Willy’s favorite pastimes. Willy Drealan died at his father’s Chanhassen home on Aug. 27, 2018. 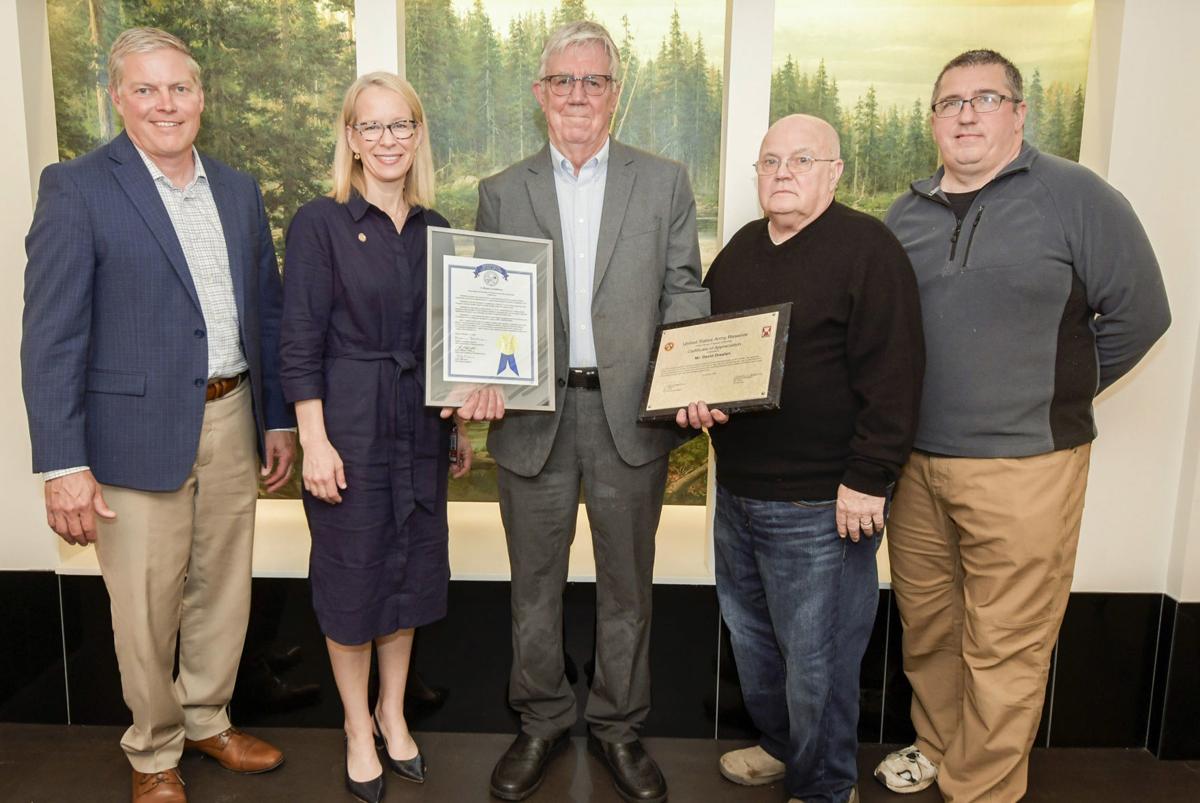 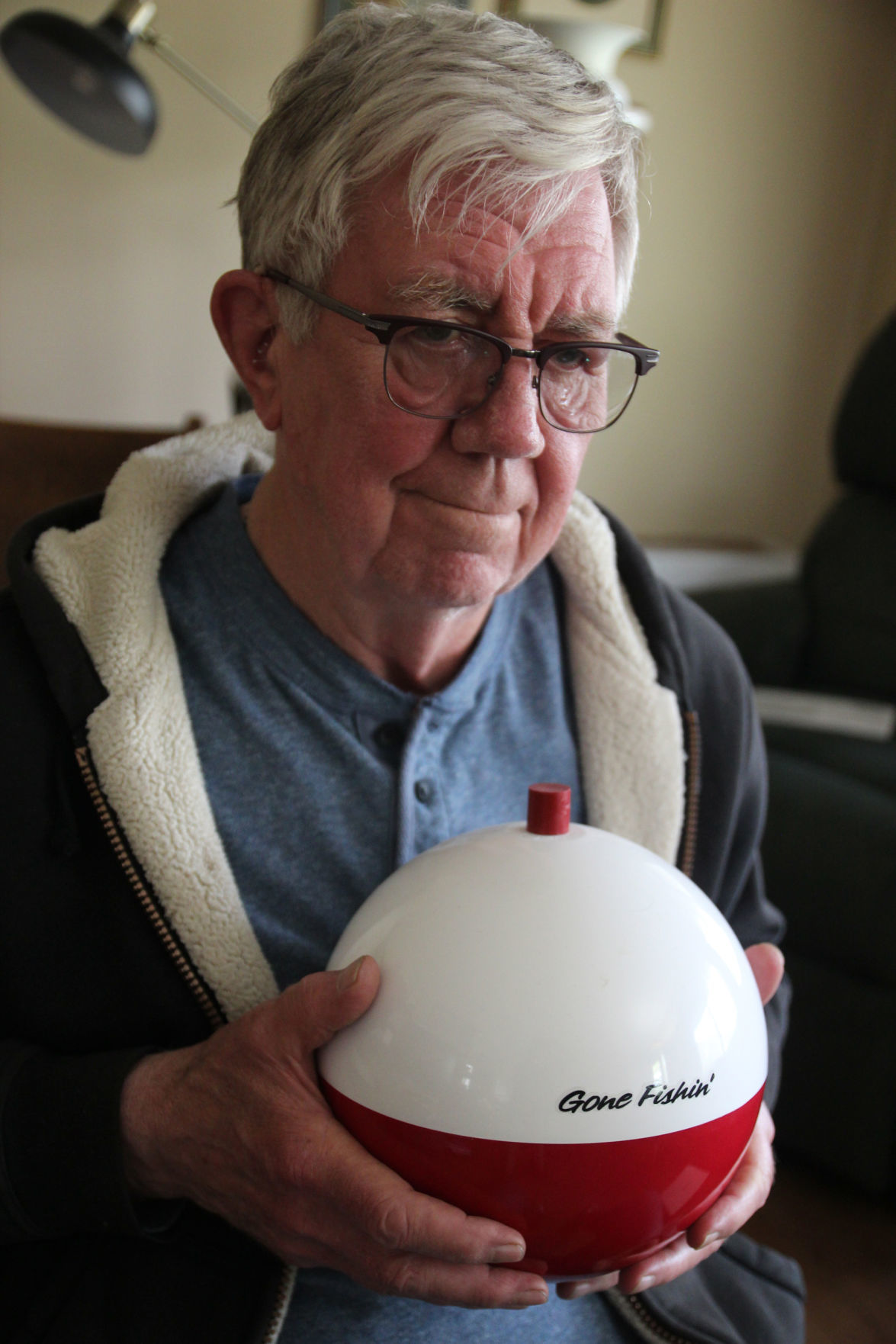 Drealan keeps Willy’s ashes in a fishing bobber memorial, a nod to one of Willy’s favorite activities, fishing. 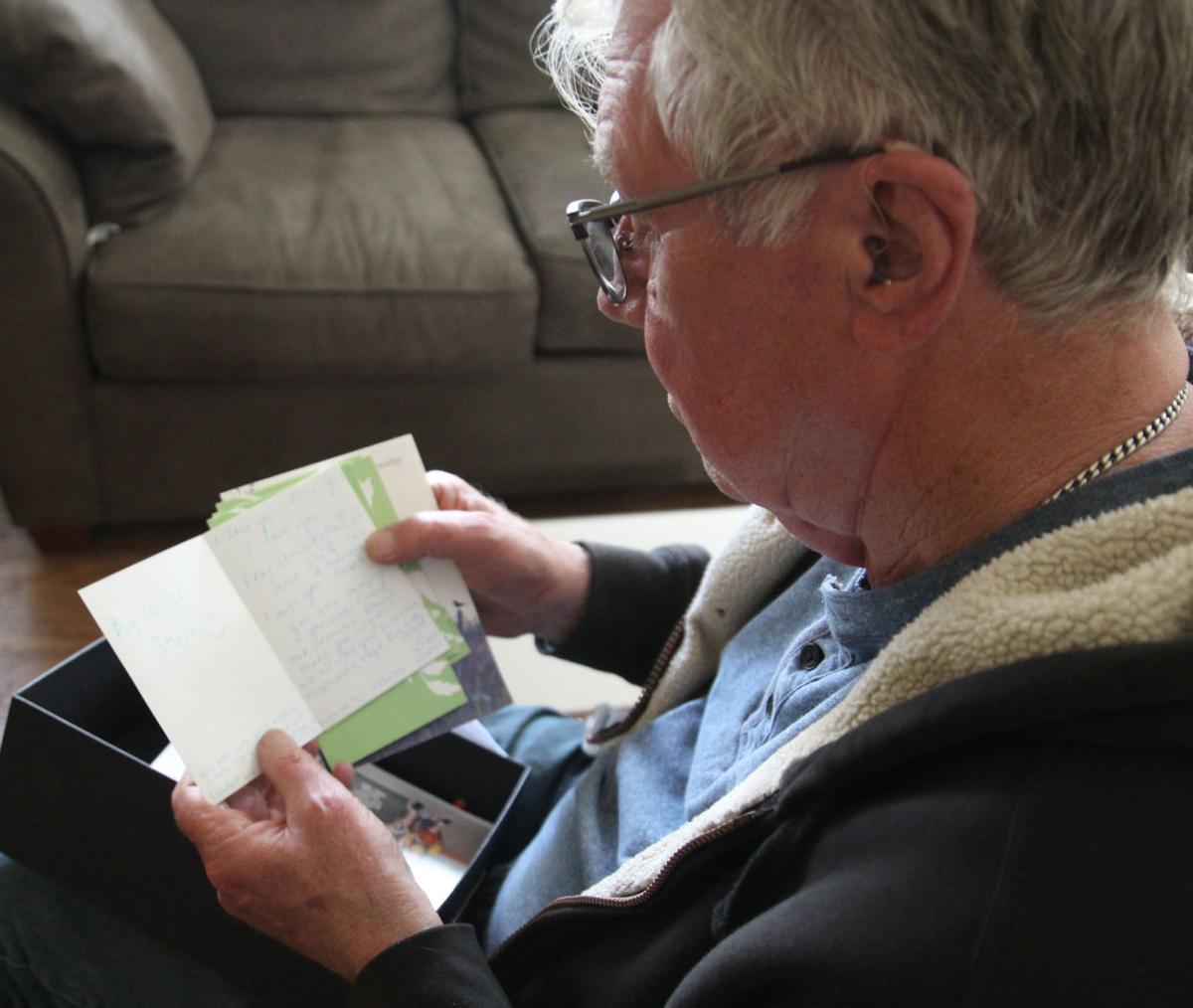 Reading through the many condolence cards Dave Drealan received in memory of his son, Willy, helped him know his son better.

Dave Drealan recalled that fishing was one of his son Willy’s favorite pastimes. Willy Drealan died at his father’s Chanhassen home on Aug. 27, 2018.

Drealan keeps Willy’s ashes in a fishing bobber memorial, a nod to one of Willy’s favorite activities, fishing.

Reading through the many condolence cards Dave Drealan received in memory of his son, Willy, helped him know his son better.

When veterans help out soldiers, the benefits can provide hope and healing all around.

Drealan is a modest, close-to-the-vest guy. So he was surprised that anyone would make such a big deal over such a simple thing as a car donation.

On the face of it, what he did was practical. Living alone, it made sense to donate that extra vehicle in his driveway. As a Vietnam veteran who served in the U.S. Air Force in Thailand, he thought it would be nice if the car went to a vet or someone in military service. And he thought the donation would be a way to memorialize his son, William.

After mentioning it to retired U.S. Army colonel Bob Ayotte, the longtime Chanhassen resident made some calls.

Last December, Drealan turned over the title and the car keys to Sgt. Lance Becherer, a member of the Army Reserve, 652nd Engineer Company, out of Hammond, Wisconsin. Becherer owned a car he couldn’t afford to fix, and in November, got stranded after a training weekend in Fort McCoy.

“He had stayed behind to walk me to my car,” recalled Sgt. 1st Class Christine Buckner, in a phone interview. “He got in his car, and it wouldn’t start. He was 90 miles away from home.” So when Ayotte reached out to Buckner for a name of a veteran to help, Becherer immediately came to mind.

“I thought it made a really good Christmas present, and the guy was really happy,” Drealan said. “I felt really good about it. It’s not sitting in my driveway anymore. He has kids, his mother to take care of, and he had some pile-of-crap car that he couldn’t afford to fix, just barely pieced together. I thought, ‘Yeah, this one is going to a really nice guy.’ And I thought that’s the end of that.”

Instead, his generosity was recognized on May 8, in an hour-long ceremony and reception at the governor’s formal dining room at the Minnesota Capitol.

At that time, he was presented an “Act of Kindness” resolution, initiated by State Rep. Kelly Morrison, thanking Drealan for his generosity toward a fellow veteran. A small group gathered for the ceremony, including Becherer, the recipient of the car, State Rep. Rob Ecklund, the chair of Veterans and Military Affairs Finance and Policy, and Drealan’s former boss, Carver County Administrator David Hemze.

REST OF THE STORY

He and his wife Barbara moved to Chanhassen in 1977, when he started his career at Carver County as an intern. After earning a degree at Bemidji State University, then serving in the Air Force in Thailand during the Vietnam War, he came home, got a master’s degree and then took an internship with Carver County. He gained a full-time position with Carver County to became Carver County director of Land and Water Services. He retired in 2010 after 33 years.

But his last 11 years have been a struggle. In 2008, his wife Barbara suffered a brain stem stroke.

At one point Drealan and their son William (“Willy”), then 22 years old, spent six hours physically holding her down as she underwent treatment. Years later, the memory is still vivid for Drealan. “Her left side was flailing around and Willy and I had to take turns holding her down. And at the end of six hours, we watched that side (of her body) die. That’s still a picture in my head.” Drealan paused to blink and take a deep breath.

When Barbara returned home, Drealan took on the role of caregiver.

In 2015, Willy moved in with his parents. Willy had attended District 112 schools and graduated from Chaska High School in 2004. He attended the University of Wisconsin-Stout in Menomonie, for a time, then got a job. When he returned to Minnesota, he worked at FabCon in Savage.

“That October after Barb died, I was hanging on by a very, very thin thread,” he recalled. Thankfully, an old friend from Denver and sessions with a therapist helped him. “Fortunately, I was willing to talk.”

He recognized that Willy had depression too, and urged him to seek help, or at least to talk.

“But then in the spring he started to feel better,” Drealan said. “We’d go up to our cabin and do stuff. He was visiting friends again. In July he went on a fishing trip to Alaska and had an awesome time. But somewhere between ... somewhere in there, something got a hold of him.”

On the evening of Sept. 27, Drealan found his son’s body in his bedroom. Willy died from ketoacidosis. “It’s what happens with drinking too much and not eating,” Drealan said.

“I was just sort of numb. My sister stayed here for a week. And then I got a call from one of Willy’s friends. ‘Do you mind if we put something on, a memorial?’” Drealan was grateful.

Willy’s memorial was held at a taproom in northeast Minneapolis, and more than 200 people attended. “That place was absolutely packed by quarter after 5,” Drealan said, “and they had to kick people out at 10.” The outpouring of affection stunned Drealan.

“It was a side of him I never knew,” Drealan said. “He’d kept a wall between Barb and me and his real life. The things that they told me ... all the condolence cards. About half of them weren’t written to me. They were written directly to him. That made me feel really good.

NOT A GOOD TIME

The day after Willy died, someone knocked on his door. It was Ayotte, at the time running for Chanhassen City Council. “I wanted to put a campaign sign in his yard,” Ayotte said. “And then I started talking about a vet I knew. ‘Wanna hear a sad story?’ Dave just looked at me. He says, ‘My son just died yesterday, here in his room down the hallway.’”

The stunned Ayotte nearly fell off the porch, Drealan remembered. A half hour later, Ayotte returned. “Is there anything I can do to help you?”

“Well, I could use some help with yard work,’” Drealan conceded. While volunteers from the Rotary Club of Chanhassen cleaned the yard, Drealan motioned to the Honda Civic parked in his driveway. It was Willy’s car.

“I knew Bob was a vet, and I told him I wouldn’t mind giving it to a vet or somebody who could really use it. He said he’d look into it.”

When Drealan learned of the Act of Kindness resolution, he thought, “Oh man. But then I thought, ‘Dave you did something nice, and it’s giving someone else an example of vets helping other vets.’” And it’s another step out of his depression.

“So right now I’m transitioning,” Drealan said. “Closing the door from one life and starting a new one.”