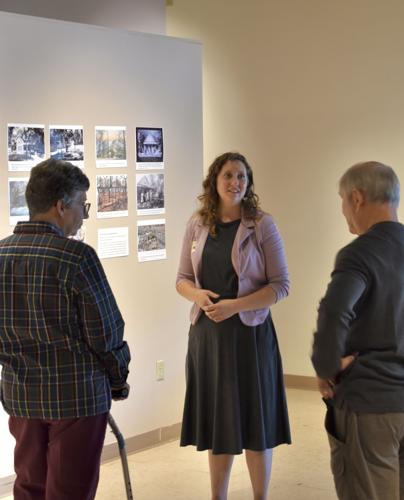 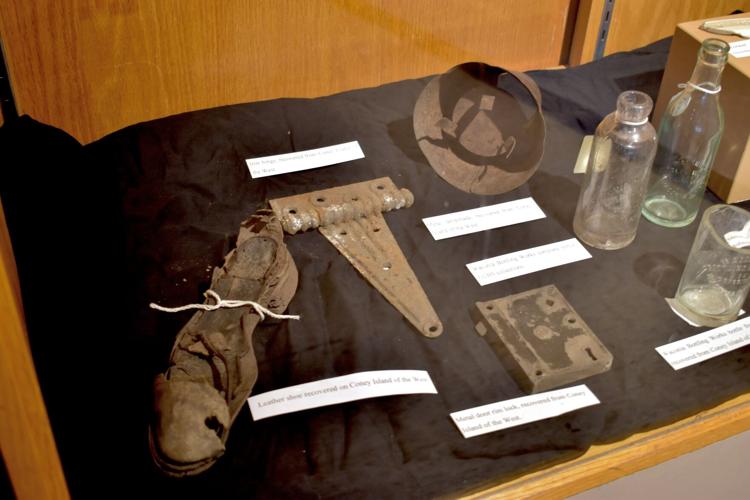 A leather shoe, iron hinge, metal lampshade, metal door rim lock and an assortment of Waconia Bottling Works bottles were displayed in a case at the event. 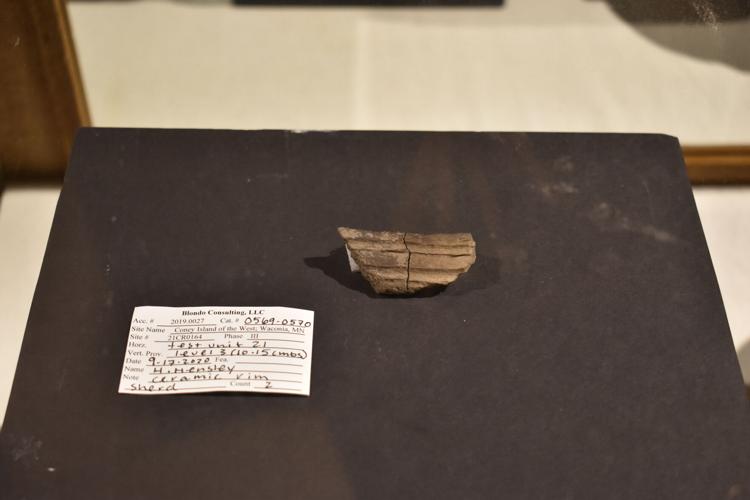 A new ceramic type, now deemed Waconia Incised, was found by Blondo Consulting archaeologist Lindsey Reiners. The incised lines on the inside of the piece are unusual for this area of the Midwest and are indicative of influence from northern Iowa. 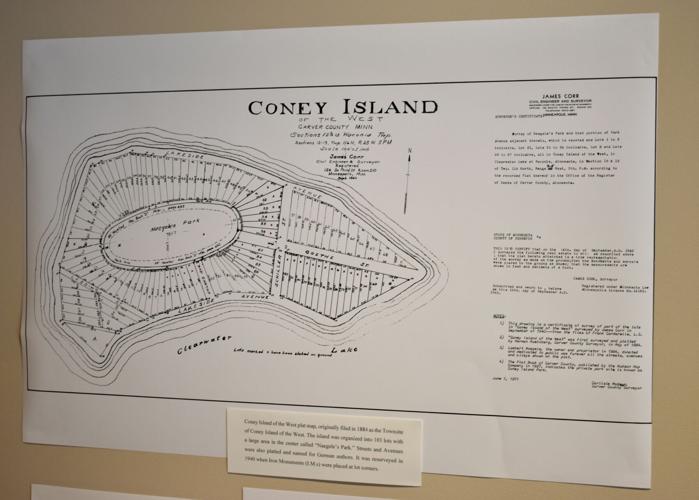 The map depicts the layout of the island in 1940 when it was resurveyed by civil engineer and surveyor James Corr. The island was organized into 103 lots around Naegele’s Park in the center.

A leather shoe, iron hinge, metal lampshade, metal door rim lock and an assortment of Waconia Bottling Works bottles were displayed in a case at the event.

A new ceramic type, now deemed Waconia Incised, was found by Blondo Consulting archaeologist Lindsey Reiners. The incised lines on the inside of the piece are unusual for this area of the Midwest and are indicative of influence from northern Iowa.

The map depicts the layout of the island in 1940 when it was resurveyed by civil engineer and surveyor James Corr. The island was organized into 103 lots around Naegele’s Park in the center.

The many lives of Coney Island have started to come to light thanks to the work of Blondo Consulting. The archaeology firm shared its findings from the 2016-2019 excavation of the island at the Carver County Historical Society on Sept. 10.

The exhibit highlighted such findings as ceramics, elm tree remnants and other lithics from the many years that the island was home to the Dakota people, as well as shoes, flower pots and other trinkets from the days of the Coney Island of the West resort, for which development began in the late 1800s.

“You can work your whole career on this island and probably still learn stuff by the end,” said Kelly Wolf, historic archaeologist for Blondo Consulting.

The excavation process in 2016 started off with gridding the whole island into 15-meter sections and conducting shovel tests. With the construction of trails on the south side of the island, the excavation was concentrated in that area.

According to Staff Archaeologist Hannah Hensley-Lichter, the meter-by-meter process of “digging, filling up the screen, sifting it out, finding artifacts and bagging” has produced over 5,000 artifacts over the years.

“Our whole goal is to preserve and keep things in place, because even if we are testing it, technically we are destroying it,” said Blondo Consulting archaeologist Lindsey Reiners. “But we’re trying to get as much information as possible because in the end it is going to get destroyed. There’s just so much we can potentially answer about Minnesota archaeology from the island.”

Much to Wolf’s excitement, the stratigraphy, the study of the layers of soil and sediment in relationship to time, showed linear results — meaning clear lines of separation between layers of soil — rather than mixed results.

“Generally we’re seeing it linear, so the historic period on top and the precontact period below,” Wolf said. “When it’s not mixed, it’s so much clearer of a picture… You can get a stronger sense of time.”

Steven Blondo, the owner of Blondo Consulting, shared information at the event about how the plants and other natural remnants found at the sites help clarify life on the island in the precontact period and early historic period. He noted the importance of having written documentation for reference, such as Samuel W. Pond’s book “Dakota Life in the Upper Midwest.”

“So what’s really important is in 1834, when (Pond) was living among the Dakota and watching them, this was before a lot of people were in Minnesota,” Blondo said as he spoke to a young family.

Pond’s documentation from his time living among the Dakota people provided helpful context for how materials such as elm trees were being used in day-to-day materials, such as roofing for houses or covers for food pits in the ground.

While the linear stratigraphy and biodiversity markers were exciting finds for the firm, a tiny piece of incised ceramic was the showstopper.

Reiners discovered a ceramic type that has never been found before in Minnesota—Waconia Incised. Reiners, with the help of a colleague, determined that the ceramic piece with incised lines likely came from northern Iowa or South Dakota.

While little definitive information is known about the piece, Reiners estimates that it is from the late prehistoric period, around 1200 to 1400 A.D., and is a piece of the rim of a vessel.

“We know the Dakota were in this area, but a huge indicator of outside influences is from additives called temper,” Reiners said. “Shell temper can be added to clay to make it more solid and get the moisture out so it can dry faster. Shell temper pottery is primarily found in northern Minnesota. We have very few sites in southern Minnesota that have shell temper, but we found shell temper on the island.”

Reiners is hopeful that more conversations can happen with the Dakota people in the future about the findings on the island.

“The Dakota might have some oral history or something like that, but we haven’t really had those conversations yet,” Reiners said. “It’d be a nice thing for us to do down the line. We’ve talked a little bit and they always consult every time we do something on the island.”

Since the end of the excavation project in 2019, Blondo Consulting has been working on an ongoing basis with the Carver County Parks Office on construction projects.

Wolf hopes that if proper funding is secured that research can soon continue across the northern part of the island.

“At one point they were talking about doing something with the middle, the hotel complex, and trying to clean that up a little for safety,” Wolf said. “It would be really great to get in and do more with the hotel itself because we haven’t done much there yet in terms of excavation.”

The artifacts uncovered from the excavation of Coney Island so far are now housed at the Carver County Historical Society in Waconia.