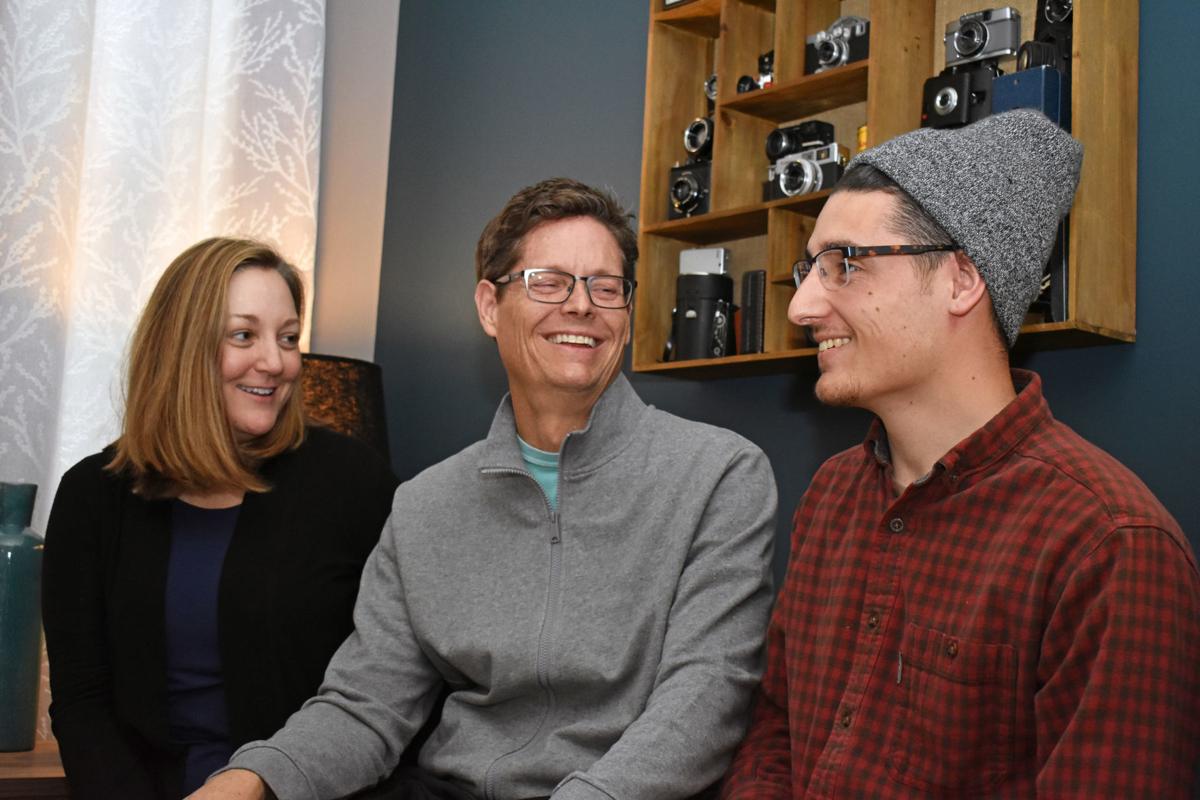 Cole Wischmann knows there’s still a lot for his father, Eric Wischmann, to do, including attending the weddings of his children and meeting his grandchildren in the future. Eric, center, is pictured with his wife, Kathy, and Cole. 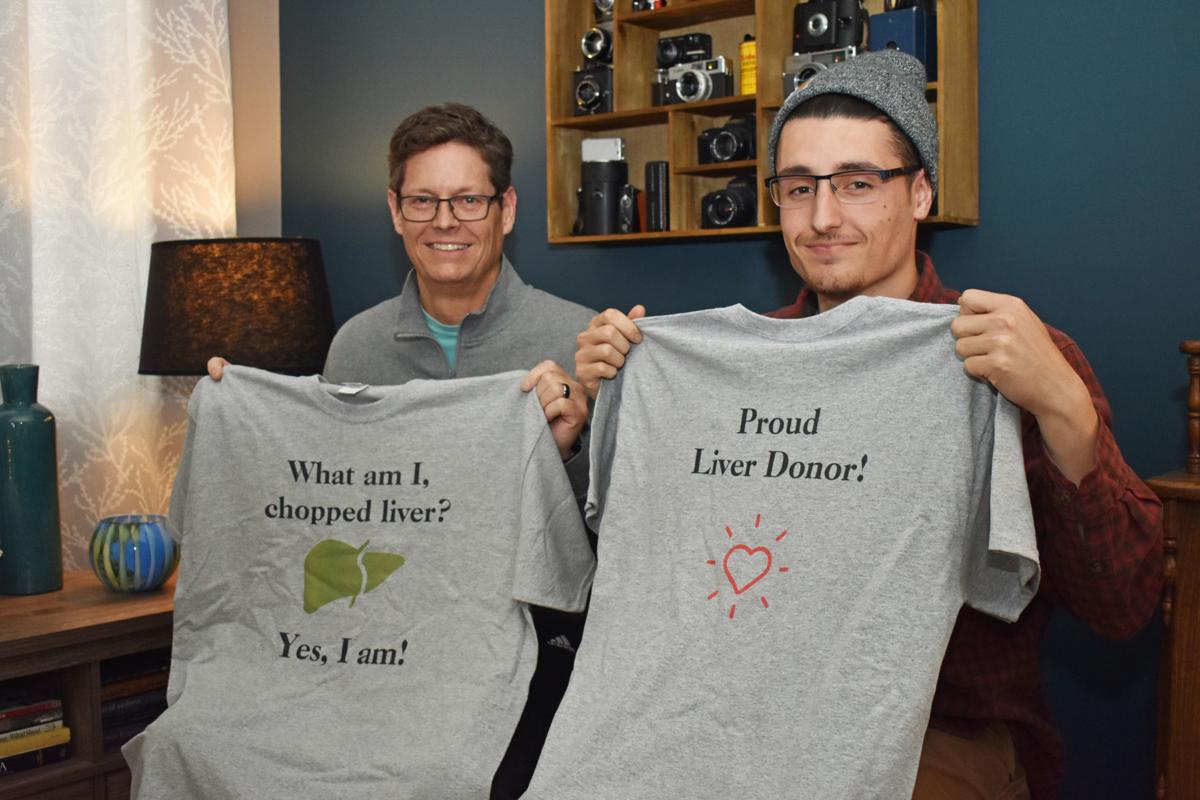 Kathy Wischmann made T-shirts for Eric and Cole leading up to their surgeries. 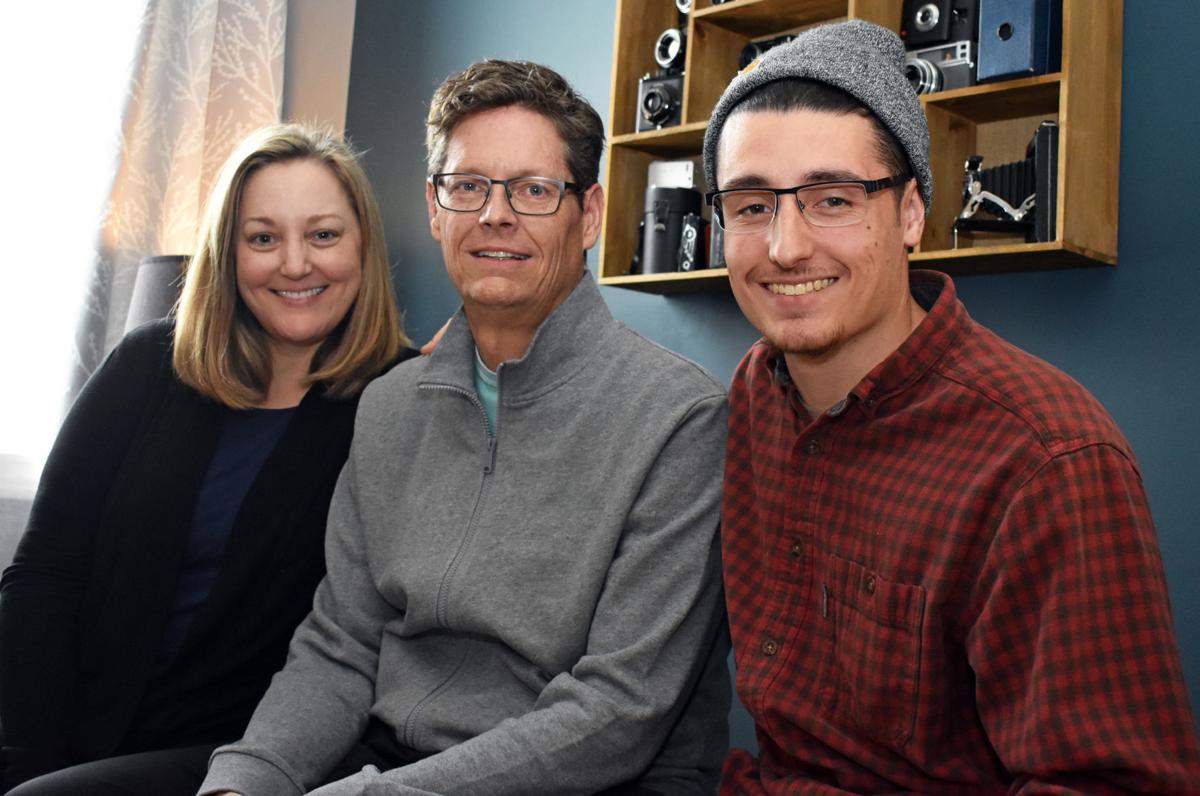 Cole Wischmann donated his liver to his father, Eric Wischmann, of Chaska on April 17. Pictured from left, Kathy, Eric and Cole Wischmann.

Cole Wischmann knows there’s still a lot for his father, Eric Wischmann, to do, including attending the weddings of his children and meeting his grandchildren in the future. Eric, center, is pictured with his wife, Kathy, and Cole.

Kathy Wischmann made T-shirts for Eric and Cole leading up to their surgeries.

Cole Wischmann donated his liver to his father, Eric Wischmann, of Chaska on April 17. Pictured from left, Kathy, Eric and Cole Wischmann.

Eric Wischmann thought it would take years before he could get a new liver.

The Chaska resident was first diagnosed with primary sclerosing cholangitis, a rare and incurable autoimmune disease, in his bile ducts in 2006. The disease caused irreversible damage to Eric’s liver and he was placed on the University of Minnesota Liver Transplant Center’s waiting list last year.

“The doctor said there were no further treatments and he was evaluated to be on the liver transplant list,” said his wife Kathy Wischmann in their home in the Chevalle neighborhood, noting his overall health had steadily decreased. “The last year or two, it’s risen to a state that is worrisome and life-threatening.”

When Eric’s son Cole Wischmann heard the news his father needed a liver, it didn’t take long for him to make up his mind.

“I knew donating a part of your liver is a big deal. I had concluded my thoughts that I would and that I’d be there for them if they asked,” said the 2016 Chanhassen High School graduate.

Cole was 20 years old at the time and the legal age to donate a liver is 21.

However, the University of Minnesota doctors assured the Wischmanns that preparations leading up to the procedure could be done in advance and the surgery could be completed soon after Cole’s 21st birthday.

Cole promptly gave up smoking tobacco months leading up to the procedure. While most of his friends turning 21 this year will celebrate drinking alcohol, Cole plans to abstain until he is fully recovered.

Looking forward, Cole knows there’s so much more for his father to do.

“He’s got to be at some weddings, meet grandchildren yet to be born and go traveling,” he said.

For Eric, the decision to allow his son to undergo such a procedure was difficult. On one hand, he was thankful and proud of his son would make such a selfless choice; on the other, he worried how the procedure would affect Cole’s health.

“It’s a full open cavity operation,” Eric said. “Now it’s not just one person, there’s two to worry about. But all the stats show it will go well. It’s still scary for a parent.”

For Eric, the operation gives him a second chance at life.

Eric, who attended Anoka High School, had dated Kathy, then living in Columbia Heights. The two later broke up during college, married other people and each had three children.

However, after the two divorced, Eric and Kathy found each other on Facebook.

“We met for coffee and never looked back,” she said.

Over the years, Kathy has been Eric’s advocate inside and outside the hospital.

“Kathy is my go-to researcher, she knows more than I do,” Eric said.

Through the numerous surgeries and complications, Kathy said Eric always kept his head up.

“He’s always looking to the possibilities,” she said. “We found each other again and we don’t want to waste any more time.”

The surgery for Eric took 13 hours, she noted and the recovery process will likely take six months to a year.

“Overall, (Eric’s) liver is showing signs it’s working, and now we are going to take baby steps to get him to start healing.

The Wischmanns hope to raise awareness that people can give part of their liver to others, due to the regenerative properties the organ has. During his journey, Eric said he met a lot of people who were waiting for livers.

In Minnesota, there has only been three live liver transplants (not including the Wischmann transplant) in 2019, according to data from the Organ Procurement and Transplantation Network.

Nationally, the number of people on the waiting list was over 115,000 in 2017. In that year, there were just 34,770 transplants, according to data from the U.S. Department of Health and Human Services.

Three in 1,000 people die in a way that allows for organ donations.

“If you have it in your heart, you’re saving someone’s life potentially,” Kathy said. “We feel pretty lucky.”

A GoFundMe set up for the family to cover medical expenses has raised over $45,000 out of a goal of $85,000. Funds that are unused will go to another patient’s transplant.

“It’s humbling that our support comes from a vast network of people,” Kathy said. “We want to pay it forward.”

Live liver donations are rare in the state of Minnesota.

For more information on becoming a liver donor visit: www.organdonor.gov/register.html?gclid=CjwKCAjwzPXlBRAjEiwAj_XTERb8d-rDNGZeRSxQlW62u8vbHM8Szya62A5JcoHOhT6Cm5h5dATVWhoC8tAQAvD_BwE