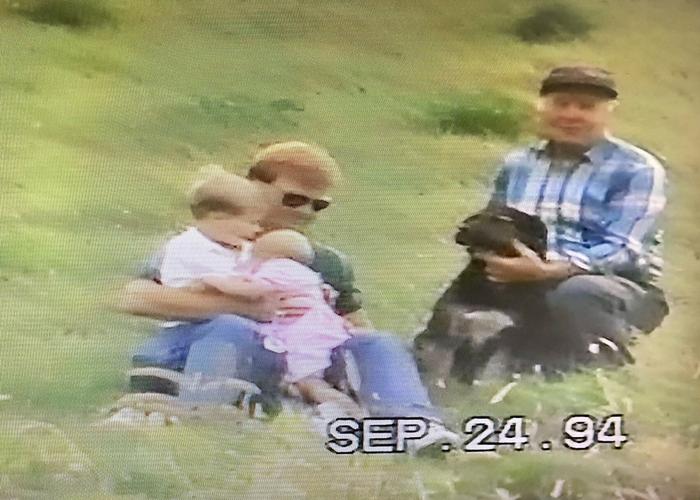 Mary Rothfusz, niece of Earl Olander, shared a still of a home video from 1994 with her kids and husband (left) with her uncle (right). 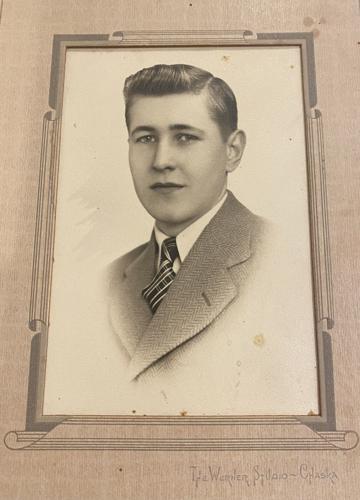 Niece of Earl Olander, Mary Rothfusz, said that the ‘42 Chaska High School graduate was very proud of his Swedish and Norwegian background and “loved his lutefisk.” Olander was a loyal member of East Union Lutheran Church in Carver. 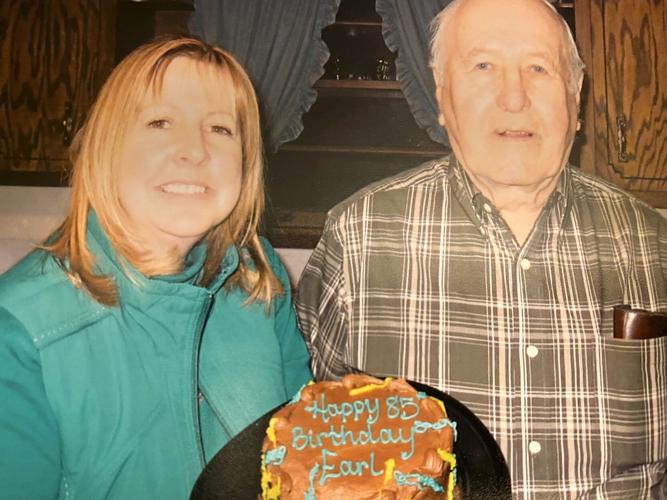 Earl Olander celebrated his 85th birthday with niece Mary Rothfusz, who is the daughter of his sister, Gloria Anderson. According to Rothfusz, her mom was his only sibling and they were extremely close. “My mom would call him every Saturday after dinner and they would talk on the phone for an hour,” she said.

Mary Rothfusz, niece of Earl Olander, shared a still of a home video from 1994 with her kids and husband (left) with her uncle (right).

Niece of Earl Olander, Mary Rothfusz, said that the ‘42 Chaska High School graduate was very proud of his Swedish and Norwegian background and “loved his lutefisk.” Olander was a loyal member of East Union Lutheran Church in Carver.

Earl Olander celebrated his 85th birthday with niece Mary Rothfusz, who is the daughter of his sister, Gloria Anderson. According to Rothfusz, her mom was his only sibling and they were extremely close. “My mom would call him every Saturday after dinner and they would talk on the phone for an hour,” she said.

Seven and half years ago, 90-year-old Earl Olander — beloved brother, uncle, neighbor, friend and community member — was murdered on his farm in Carver County.

Now Olander’s life, faith and the miraculous story of the “divine intervention” that supposedly solved his murder is being shared in an ABC 20/20 special hosted by John Quiñones, produced by Committee Films based out of Eden Prairie.

“We decided to focus on this story for a number of reasons, but what initially stood out to us was how many people loved Earl,” Janice Johnston, 20/20 executive producer with ABC, said in an email. “We spoke to his friends, his neighbors, his church community, and all of them echoed the same sentiment. When we found out that the key to solving his murder lay in a Bible miles away from the crime scene, we knew we had to delve deeper into this story and share it with our viewers.”

In April 2015, Olander was murdered in his home in San Francisco Township. Reinol Vergara, 36, and Edson Benitez, 30, were charged with four counts of murder, pleaded guilty to one and were sentenced in 2016 to 37 years in prison.

Vergara was a painter who worked on Olander’s house and had become aware of the farmer’s true wealth, despite his modest lifestyle. Vergara then made a plan with Benitez to burglarize the home. According to a press release on the special from ABC, “Olander had millions of dollars to his name, from inheritance and his years of farming, according to investigators.”

Olander was found dead inside his home two days after his murder, with his hands and feet bound by tape. After a month of no leads, it wasn’t until a Norwegian Bible with two $1,000 savings bonds issued to Olander were found in a vacated apartment of Benitez.

A year before the murder, Olander had asked his niece, Mary Rothfusz, and her family to clean out the basement and take whatever they wanted — which included Olander’s Norwegian Bible. The hot weather, however, deterred them from doing so after grabbing lunch together.

“We didn’t end up cleaning it out, thank goodness, so the Bible was there,” Rothfusz said. “I mean, that’s what led to them finding the truth, so I think the whole thing is really kind of interesting.”

Maria Awes, an award-winning investigative journalist and senior vice president, executive producer and head of development at Committee Films, was interested in telling the story of the bachelor farmer as it’s one that she followed as a Carver County resident herself while it was happening.

“Living in the community, knowing the beginning, the middle and the end of that case and how it was solved, what was involved — it stands out,” Awes said. “In a landscape of true crime, it stands out in many ways because of the parallels between the victim Earl Olander’s spirituality and how the case ultimately is cracked.”

According to Awes, the 2-hour special will lead audiences through the beginning of the crime itself and follow how investigators worked the case. Key speakers in the special include former Carver County Sheriff Jim Olson, lead investigator on the case Chris Wagner, friends, family, neighbors and more.

“He touched a lot of people in and around this community, I think he will touch even more people when this show airs,” Awes said.

Committee Films worked closely with the Carver County Sheriff’s Office and court administration to get documents, footage, audio and other materials for the special.

“They really did a wonderful job in terms of pulling and putting together basically the case file for us so that we could reconstruct everything as accurately as possible,” Awes said. “We take that very, very seriously.”

She noted how important it is when making a 20/20 special that “the victim is remembered for the person that they really are as opposed to a news headline on a story” — which is also important to Olander’s family.

“I do not think he would like the attention he is getting from this program, but when a terrible crime like this happens, it makes the news,” Rothfusz said. “So since he made the news and the national news, I want people to know what a good and kind man he was to everyone who knew him.”

Putting the special together was a nine month process that included the 13 internal staff of Committee Films, freelancers, local actors and crew.

“It’s entirely a Minnesota production with the exception of it being for ABC News and having ABC News talent John Quinones,” Awes said. “I think that our Midwestern kind of sentiment and approach to things is a bit different than it might be if you’re outsiders coming in to try and tell some of these stories.”

Husband-wife duo Maria and Andy Awes, a film and commercial director and editor, started Committee Films about 15 years ago. In that time, they have produced content for the History Channel, PBS, HGTV, National Geographic and many more.

“We are incredibly lucky to work with the passionate team at Committee Films and we’re excited to bring this story, which we’ve all worked extremely hard on, to our viewers,” Johnston said.

In addition to this special with ABC, Committee Films produced the 20/20 show “In an Instant” which ran for 3 seasons and other specials such as “Gone at Dawn,” which covers the murder of Mason City, Iowa journalist Jodi Huisentruit.

Olander’s episode will air at 8 p.m. Friday, Nov. 11, on ABC and will be available to stream on Hulu following the premiere.