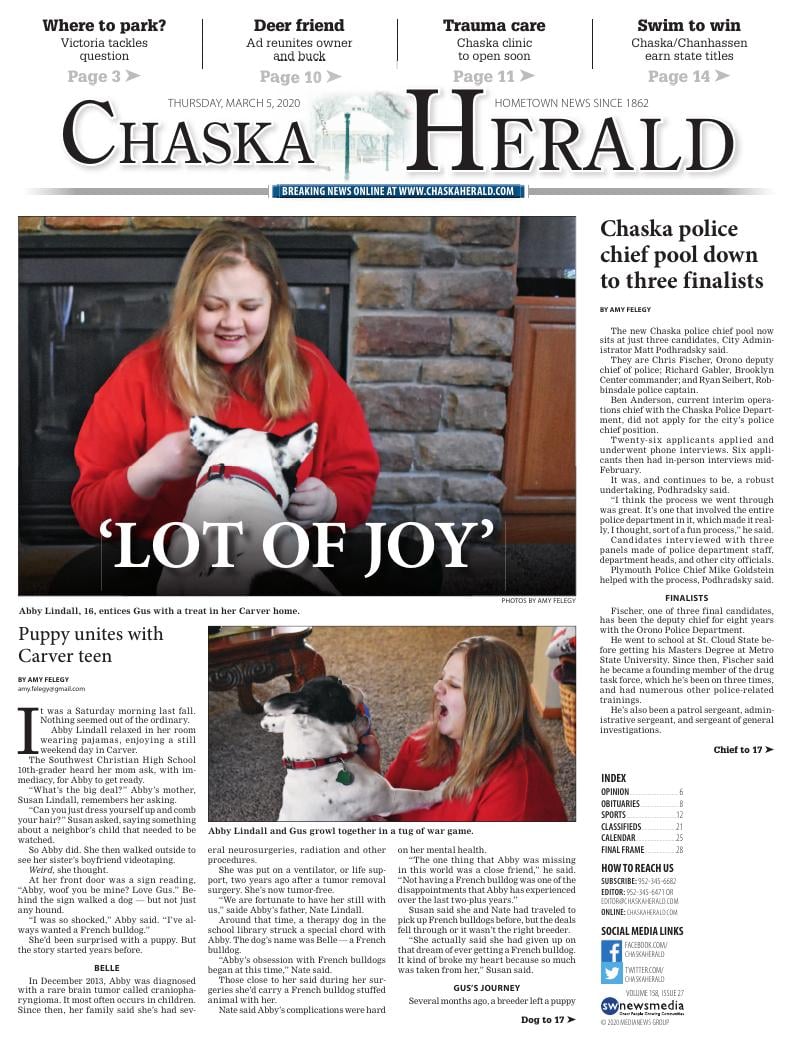 Abby Lindall, 16, entices Gus with a treat in her Carver home.

Abby Lindall and Gus growl together in a tug of war game.

It was a Saturday morning last fall. Nothing seemed out of the ordinary.

The Southwest Christian High School 10th-grader heard her mom ask, with immediacy, for Abby to get ready.

“Can you just dress yourself up and comb your hair?” Susan asked, saying something about a neighbor’s child that needed to be watched.

So Abby did. She then walked outside to see her sister’s boyfriend videotaping.

At her front door was a sign reading, “Abby, woof you be mine? Love Gus.” Behind the sign walked a dog — but not just any hound.

“I was so shocked,” Abby said. “I’ve always wanted a French bulldog.”

She’d been surprised with a puppy. But the story started years before.

In December 2013, Abby was diagnosed with a rare brain tumor called craniopharyngioma. It most often occurs in children. Since then, her family said she’s had several neurosurgeries, radiation and other procedures.

She was put on a ventilator, or life support, two years ago after a tumor removal surgery. She’s now tumor-free.

“We are fortunate to have her still with us,” saide Abby’s father, Nate Lindall.

Around that time, a therapy dog in the school library struck a special chord with Abby. The dog’s name was Nola — a French bulldog owned by librarian Belle Nelson.

Those close to her said during her surgeries she’d carry a French bulldog stuffed animal with her.

Nate said Abby’s complications were hard on her mental health.

“The one thing that Abby was missing in this world was a close friend,” he said. “Not having a French bulldog was one of the disappointments that Abby has experienced over the last two-plus years.”

Susan said she and Nate had traveled to pick up French bulldogs before, but the deals fell through or it wasn’t the right breeder.

“She actually said she had given up on that dream of ever getting a French bulldog. It kind of broke my heart because so much was taken from her,” Susan said.

Several months ago, a breeder left a puppy at a New York veterinary clinic. Staff said one of the puppy’s offspring was deaf and the breeder didn’t want to use his genes anymore.

Workers at the New York clinic took in the dog. Clinic staff tried to think of someone who might be able to find him a home — a home for Gus.

They sent a message and picture of Gus to a group of representatives at Purina, the pet food company, hoping someone would adopt him or knew a family who would.

That’s when Katy Swantek, part of that message group, entered the story. She sent a photo of Gus to her dog-loving aunt.

Turns out, Swantek’s aunt used to be neighbors with the Lindalls and knew of Abby’s love for French bulldogs.

“She remembered that Abby wanted a Frenchie all her life,” Swantek said of her aunt. “My aunt called (Susan) and was like, ‘Hey, would you guys be interested in this dog?”

The answer was a resounding yes.

“I didn’t even ask Nate or Abby, I just said, ‘Of course we want this dog,’” Susan said.

The problem? Gus was in New York and the Lindalls were in Minnesota.

To fly Gus over could be just as expensive as adopting a similar dog in the cities. Flying is also dangerous for flat-nosed dogs, because they can’t breathe well on planes.

Abby’s parents tried to figure out the logistics, and they weren’t in a position to pay for the dog.

Meanwhile, Abby had no idea there was a future four-legged friend hopefully arriving at her doorstep in just a week.

Swantek messaged Purina representatives from across the country for help. She got in touch with staff from New York to Minnesota with one request:

“We’re trying to get this dog a home. Is there any way that we can kind of make a train to get him to her?” Swantek asked her coworkers.

“Everybody was like, ‘Yes. One hundred percent yes,’” she said.

And so the journey began from New York to Pennsylvania. Gus hopped in cars and at people’s houses for the night in Ohio, Indiana and Illinois.

His last trip brought him from Iowa to Carver, Minnesota — at no cost to the Lindall family.

Leah Dierberger, a Purina representative covering the Chaska/Chanhassen area, was the last to spend road time with Gus before dropping him off at his new home.

“He had a fun little adventure,” Dierberger said.

She picked up Gus on the southern border of Minnesota from her coworker. After driving a few hours, she made a “nice, little, fun” basket of toys and made a sign to accompany Gus to Abby’s doorstep.

“I wanted to make it special and fun, and there was so much hard work put together to get Gus to Abby,” Dierberger said.

Spectators say Abby had a look of gratefulness and surprise on her face when Gus was brought to the door, but it took a while for her to realize the pup was hers.

“Abby thought it was someone just showing up with a service dog,” Susan said. ‘She’s like, ‘Hey dog.’ It took us like four times telling her, ‘This is your dog.”

Then it hit her.

“I was so shocked,” Abby said.

Dierberger recalled the day, too.

“It was a moment that gave me the best goosebumps I’ve ever felt,” she said.

They describe him as attached and a snuggler, taking every opportunity to be with his favorite humans.

“She’ll sit and knit, and he’ll just lie with her. He’s always with her,” Susan said.

Abby said Gus has made a big difference in her life.

“I wasn’t focused on anything else. Just Gus. It kind of took my mind off things,” Abby said.

The one word she uses to describe what Gus means to her?

A Chaska police badge is adorned on the side of a police car.

Ben Anderson, current interim operations chief with the Chaska Police Department, did not apply for the city’s police chief position.

It was, and continues to be, a robust undertaking, Podhradsky said.

“I think the process we went through was great. It’s one that involved the entire police department in it, which made it really, I thought, sort of a fun process,” he said.

Candidates interviewed with three panels made of police department staff, department heads, and other city officials.

Fischer, one of three final candidates, has been the deputy chief for eight years with the Orono Police Department.

He went to school at St. Cloud State before getting his Masters Degree at Metro State University. Since then, Fischer said he became a founding member of the drug task force, which he’s been on three times, and had numerous other police-related trainings.

He’s also been a patrol sergeant, administrative sergeant, and sergeant of general investigations.

Fischer said he applied to be the Chaska police chief for several reasons.

“I want to continue to grow myself as a leader in law enforcement,” he said.

But not just in any city.

“I’ve been very selective in finding communities. What I see out of Chaska is very exciting,” Fischer said.

He said he’s worked in small towns his entire life, calling himself a “small town person.”

“There’s a great police department already there. I just can’t believe the amount of services the city provides while keeping taxes low.”

Robbinsdale Police Captain Ryan Seibert is another finalist. The Chanhassen resident has worked his current role for about 13 years, overseeing investigations and handling support services.

As a local, he’d like to stay close to home.

“I think it’s just important for me, as a continuation of public service, I’d really like to do so in the same area that I live,” Seibert said.

He said when he saw the job opening for Chaska police chief, he recognized many of the desired attributes in himself.

“Dedicated individual, someone that has commitment to being an inclusive leader and potential to be a visionary,” Seibert said, recalling the list. “Take a look at current processes within and… also look toward the future.”

Richard Gabler, commander in Brooklyn Center, did not immediately respond to a request for comment.

Though Podhradsky said a finalist will likely get an offer mid-March. After that, it could take some time before the position is finalized.

Podhradsky called it a “rule of thumb” in such hiring decisions, considering the pending police chief needs to go through a background check, reference checks and a psychological evaluation.

After the anticipated mid-March offer, the new chief would likely need to give his previous employer a 30-day notice. 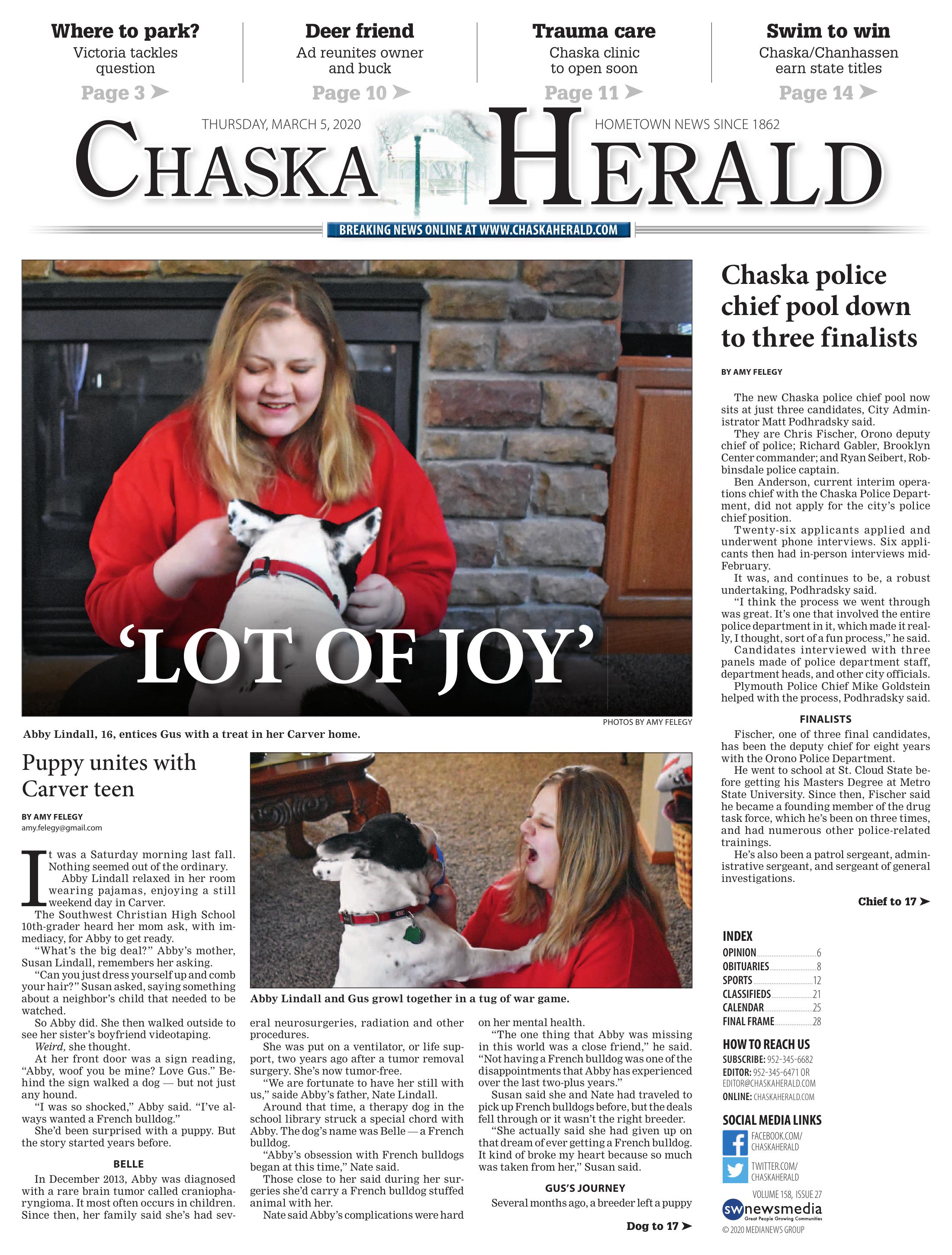