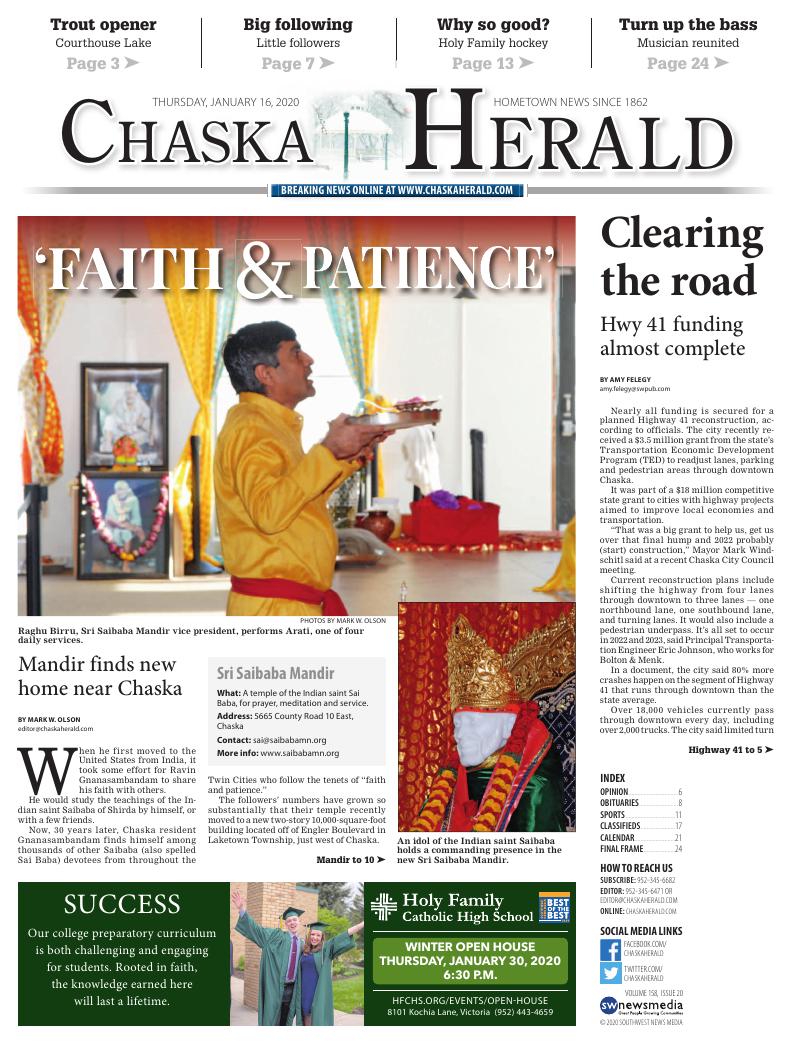 An idol of the Indian saint Saibaba holds a commanding presence in the new Sri Saibaba Mandir.

Hundreds of followers attend a dedication of the Saibaba idol on Dec. 15 at the Sri Saibaba Mandir.

The guru Dr. Chandra Bhanu Satpathy, to the left of the Saibaba idol, and Pandit Ashwin Madanapalli, conduct ceremonies during the December dedication.

The Sri Saibaba Mandir (“Temple of the Revered Saint Saibaba”) off of Engler Boulevard in Laketown Township.

A few of the 200 volunteers at the recent Sri Saibaba Mandir dedication pose for a photograph.

A trellis of roses decorates the Sri Saibaba Mandir during its dedication.

Volunteers work the front desk at the Sri Saibaba Mandir dedication in December.

When he first moved to the United States from India, it took some effort for Ravin Gnanasambandam to share his faith with others.

He would study the teachings of the Indian saint Saibaba of Shirda by himself, or with a few friends.

Now, 30 years later, Chaska resident Gnanasambandam finds himself among thousands of other Saibaba (also spelled Sai Baba) devotees from throughout the Twin Cities who follow the tenets of “faith and patience.”

The followers’ numbers have grown so substantially that their temple recently moved to a new two-story 10,000-square-foot building located off of Engler Boulevard in Laketown Township, just west of Chaska.

The Sri Saibaba Mandir (“Temple of the Revered Saint Saibaba”) was dedicated in December.

Gnanasambandam called it “a place of worship, prayer, meditation and service to the needy.”

Saibaba lived in a small village called Shirdi in what is now the state of Maharashtra in India. He was a spiritual leader who didn't adhere to a specific religion. He lived as a fakir, who follows a life of poverty and worship, and died in 1918.

“He was someone who brought people together,” said Gnanasambandam, who serves as president of the Sri Saibaba Mandir.

According to adherents, those who follow Saibaba sometimes follow other faiths, such as Hinduism, where many of the mandir’s traditions originate.

“The preaching of Saibaba has nothing to do with religion. You don’t have to be tied to any religion at all,” said Raghu Birru, vice president of the mandir, from Blaine. Birru and his family have been going to the Saibaba mandir every Saturday for the past 10 years.

For Birru, Saibaba’s teachings have instructed his behaviour and encouraged community service. Fellow devotees have become like a family, he said.

Gnanasambandam was a 28-year-old college student in India when he was facing difficulties in life. “Someone said, ‘Go to the temple of Saibaba and pray to him.’ And I went to him and prayed and things started happening,” he said.

Many pray to Saibaba for health or guidance or in the wake of a tragedy, Gnanasambandam said.

“I’ve seen many people who get cured of their bad health,” he said.

In 2002, when he moved to Minnesota to work as a dairy scientist, Gnanasambandam and about 15 other members founded what was then called the Shirdi Saibaba Prayer Center in a 700-square-foot one-bedroom Hopkins apartment.

The prayer center quickly grew, and by 2006, it moved to a Minneapolis building once used as a church by Swedish Methodists. The center added a large Saibaba idol, carved out of marble in India.

As the Asian-Indian population grows in Minnesota and across the United States, so have Saibaba followers.

The mandir is now visited by about 500 followers on a regular basis, but can bring in as many as 2,000 devotees for special events, Gnanasambandam notes.

“We don’t have an ambition that we want to grow. All we want to do is facilitate people who are following him or want to know about him,” Buddi said.

Space was becoming an issue at the Minneapolis site, and mandir members started looking at different options.

They decided that remodeling and expanding the existing location wasn’t a good use of funds, so members began looking for a new site throughout the metro area. They ultimately purchased a 42-acre Carver County site in 2014.

“It’s nice land and not too far away from the Twin Cities,” said Gnanasambandam, who moved from the north metro to Chaska two years ago to be closer to the mandir.

Construction of the temple was completed late last year. The building sits among cornfields, just a stone’s throw away from the rural Augusta Ballpark.

The first floor holds a kitchen and community hall. There is an area near the front door for followers to leave their shoes, as well as an optional foot-washing station. The worship area is on the second floor, with a commanding view of the countryside.

The 1,000 pound Saibaba idol was carefully moved from the Minneapolis location to Chaska, at a total cost of $15,000, Gnanasambandam said.

The mandir’s pandit (similar to a pastor) is Ashwin Madanapalli. The pandit and volunteers lead the four services held throughout the day.

The mandir was dedicated Dec. 13-15 with help from 200 volunteers who organized the event, prepared food and decorated the building.

Dr. Chandra Bhanu Satpathy, a guru or spiritual leader, who once gave a prayer before the U.S. Congress as a guest chaplain, was part of the service. Satpathy helped guide the building of the mandir.

Shirdi Sai Global Foundation trustees, from throughout the United States, as well as India, New Zealand, the United Kingdom and Germany also attended.

The three-day event, filled with food, music and worship, attracted over 2,500 people. The top floor was filled with followers during the idol dedication. Cars packed the Carver Station parking lot, where attendees were bused to the nearby mandir.

“I hope to see it be a good place for people to come and experience some peace. They can meditate. They can be involved in activities that the mandir picks up, like feeding the poor and working in a soup kitchen in activities to help the needy,” Gnanasambandam said.

“It means a lot,” Gnanasambandam said, of the new mandir. “It gives us the opportunity to be of service to people. Saibaba is about helping others in need.”

What: A temple of the Indian saint Sai Baba, for prayer, meditation and service.

Dr. Chandra Bhanu Satpathy said of Saibaba in his 2020 New Years message: “Some call him God or Avatar, some as Sadguru or saint and address Him with different epithets. In quintessence, He can be defined as a true lover of God as He loved and helped whosoever came to Him – the creation of God. A human embodiment playing the role of God and for God without any ego or ambition.”

Nearly all funding is secured for a planned Highway 41 reconstruction, according to officials. The city recently received a $3.5 million grant from the state’s Transportation Economic Development Program (TED) to readjust lanes, parking and pedestrian areas through downtown Chaska.

It was part of a $18 million competitive state grant to cities with highway projects aimed to improve local economies and transportation.

“That was a big grant to help us, get us over that final hump and 2022 probably (start) construction,” Mayor Mark Windschitl said at a recent Chaska City Council meeting.

Current reconstruction plans include shifting the highway from four lanes through downtown to three lanes — one northbound lane, one southbound lane, and turning lanes. It would also include a pedestrian underpass. It’s all set to occur in 2022 and 2023, said Principal Transportation Engineer Eric Johnson, who works for Bolton & Menk.

In a document, the city said 80% more crashes happen on the segment of Highway 41 that runs through downtown than the state average.

Over 18,000 vehicles currently pass through downtown every day, including over 2,000 trucks. The city said limited turn lanes contribute to weaving vehicles and traffic is often slowed to wait for turning vehicles throughout downtown.

Safety is also an issue, with pedestrians needing to cross four lanes of traffic on the highway.

“This project should have a major positive impact on downtown Chaska, making the traffic flow more efficiently and safely through downtown (and) cater much more to pedestrians throughout the entire downtown area,” said City Administrator Matt Podhradsky, in a council memo.

The city still needs about $2 million in firm funding commitments for the $23.6 million project, said Podhradsky, which includes a portion of Highway 61 just east of 41. In 2017, the total project cost was estimated to be about $15 million.

He said remaining money could come from federal funds given to local governments, state bonding funds, or the county sales tax.

“The city, county and state will continue to work together to get the remaining needed funds assembled ensuring this project begins construction in 2022,” Johnson said.

Road plans haven’t changed since the reconstruction was introduced in 2017, Johnson said. Two lanes — one northbound, one southbound — would carry traffic through downtown Chaska. Right turn lanes at each intersection and left turn lanes, at Second and Fourth streets as well as at County Road 61, are also in the plan.

Street parking on Highway 41 would be eliminated in favor of lots along Walnut Street. Forty lots would be lost during reconstruction.

In an earlier meeting, Podhradsky said around a third of parking area along Highway 41 isn’t currently being used because drivers use more than one stall.

Currently near the County Road 61 and Pine Street intersection, pedestrians can activate a yellow flashing light.

With new construction plans, it would be replaced by a pedestrian-controlled stoplight, turning red when a pedestrian presses a button. Sidewalks along the roads are also expected to be widened to ADA standards, officials said. Medians would also expand in front of City Square Park.

A pedestrian hybrid beacon, which includes a combination of yellow and red flashing lights, is proposed on Highway 41 just north of the Chaska Curling Center. City officials say it’s currently a problem area.

“I still hold my breath when I go through that intersection,” Mayor Windschitl said.

The pedestrian underpass would run under Highway 41, in the area of Dolce Vita Wine Shop and Shop 501 & Company, according to project managers at Bolton & Menk.

Also in the plan is a capacity improvement, meant to adjust roads for higher levels of traffic into the coming decades.

A video fly-through of the planned reconstruction is available at http://bit.ly/2qxr0MN. 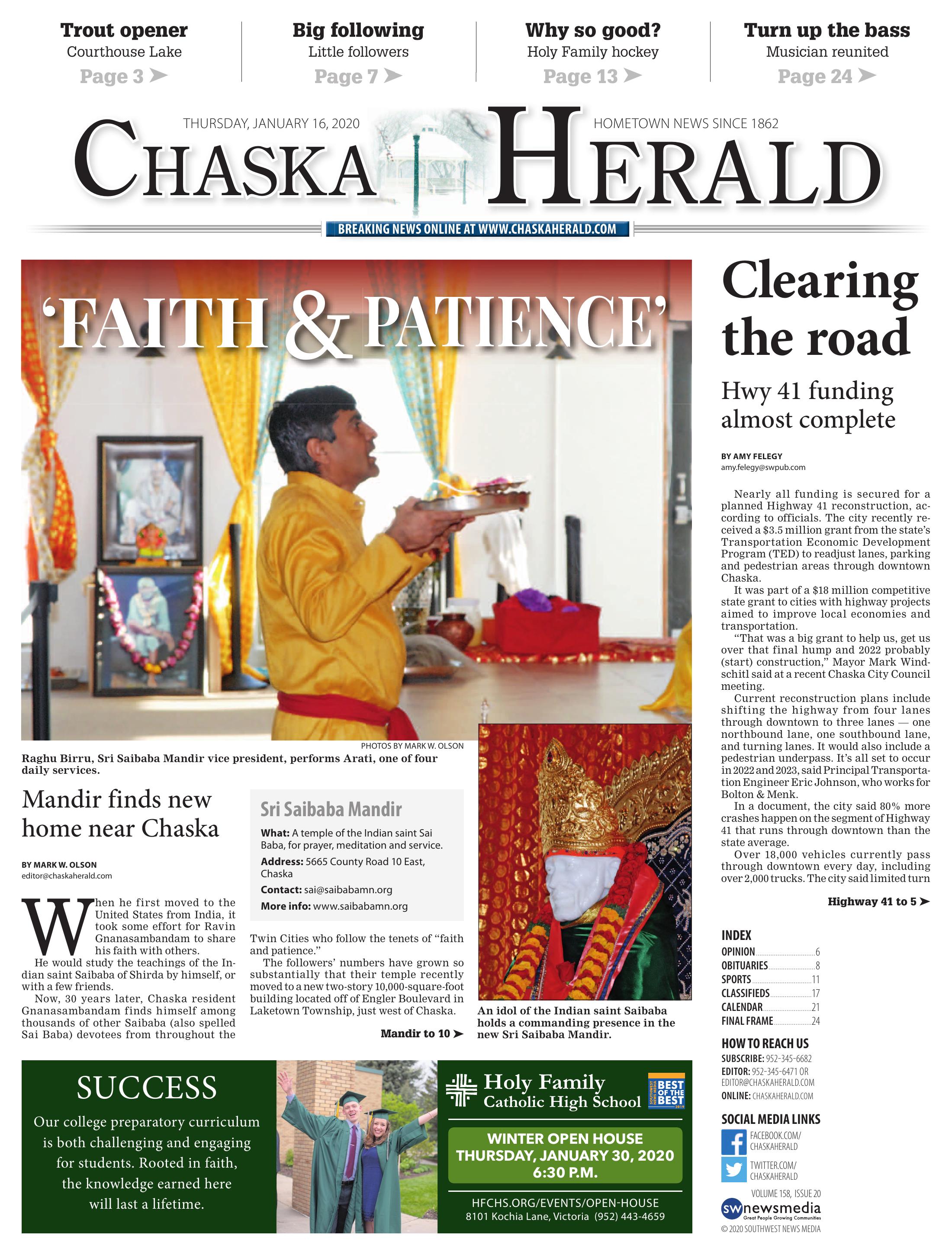