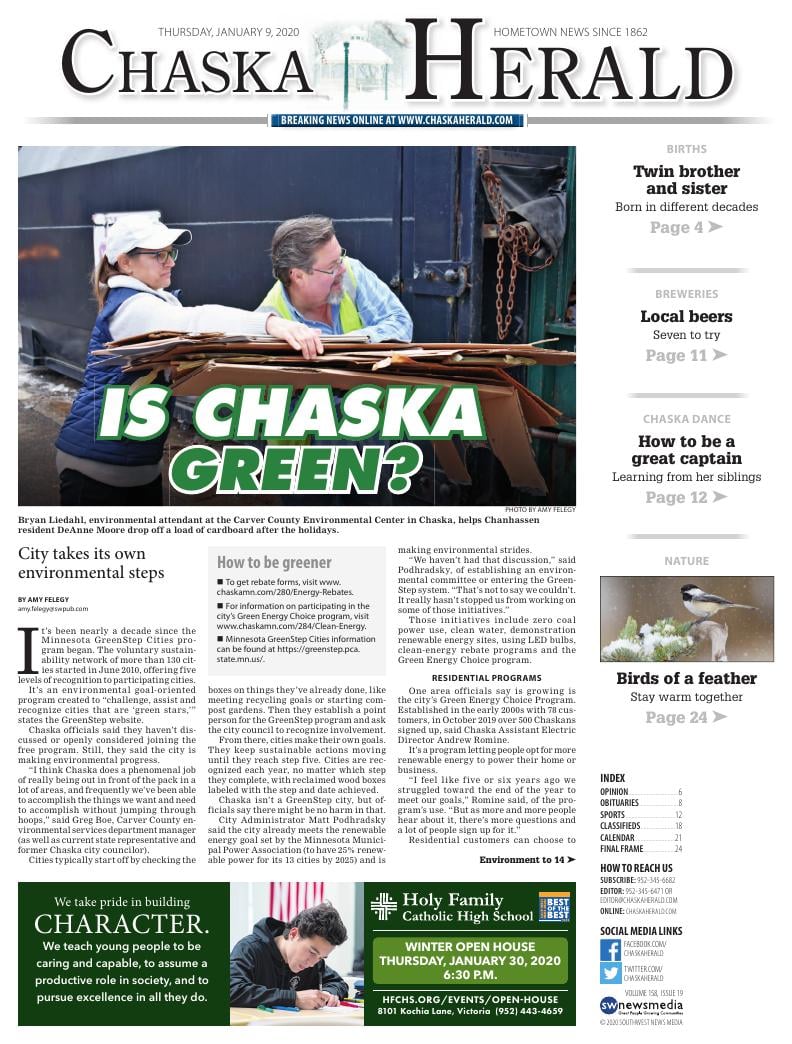 It’s been nearly a decade since the Minnesota GreenStep Cities program began. The voluntary sustainability network of more than 130 cities started in June 2010, offering five levels of recognition to participating cities.

It’s an environmental goal-oriented program created to “challenge, assist and recognize cities that are ‘green stars,’” states the GreenStep website.

“I think Chaska does a phenomenal job of really being out in front of the pack in a lot of areas, and frequently we’ve been able to accomplish the things we want and need to accomplish without jumping through hoops,” said Greg Boe, Carver County environmental services department manager (as well as current state representative and former Chaska city councilor).

Cities typically start off by checking the boxes on things they’ve already done, like meeting recycling goals or starting compost gardens. Then they establish a point person for the GreenStep program and ask the city council to recognize involvement.

From there, cities make their own goals. They keep sustainable actions moving until they reach step five. Cities are recognized each year, no matter which step they complete, with reclaimed wood boxes labeled with the step and date achieved.

Chaska isn’t a GreenStep city, but officials say there might be no harm in that.

City Administrator Matt Podhradsky said the city already meets the renewable energy goal set by the Minnesota Municipal Power Association (to have 25% renewable power for its 13 cities by 2025) and is making environmental strides.

“We haven’t had that discussion,” said Podhradsky, of establishing an environmental committee or entering the GreenStep system. “That’s not to say we couldn’t. It really hasn’t stopped us from working on some of those initiatives.”

One area officials say is growing is the city’s Green Energy Choice Program. Established in the early 2000s with 78 customers, in October 2019 over 500 Chaskans signed up, said Chaska Assistant Electric Director Andrew Romine.

It’s a program letting people opt for more renewable energy to power their home or business.

Residential customers can choose to have a portion — 50%, 75% or 100% — of their energy come from renewable options like wind, solar, bioenergy or hydropower. It costs under $3 a month to Chaska homeowners or renters, with no contract term.

It’s why Romine hopes talk and use increases for the program, which gets its power from MMPA.

Another way Chaska residents can live greener is through the city’s rebate program.

In addition to the two free light bulbs Chaska electric customers receive, available at the city’s Municipal Services Building, a list of other environmentally-friendly rebates exist for those who make energy-conscious purchases.

“I’m really surprised by the amount of residents that don’t know about it,” he said, nodding to interactions with the public at open house and River City Days events.

Romine said over $500,000 is given in those residential and commercial rebates each year, which surpasses the annual goal the department sets.

Chaska’s electric department is slowly transitioning streetlights to LED bulbs, but there’s no set schedule or goal to complete the change — something GreenStep could help keep track of.

“When there is downtime, guys go out and change the lights,” Romine said, adding a handful of staff usually go out on Fridays to do the work.

High-pressure sodium lights, which the city started with, require more energy as they degrade and aren’t considered efficient like LEDs. The transition, Romine said, was prompted by a high electric bill.

The city’s electric department said it expects less expense and maintenance with the introduction of LEDs, which it started replacing around the start of 2019.

In addition, the city has several “hometown demonstrations” that are still going strong.

MMPA’s Hometown Wind program brought a turbine to Pioneer Ridge Middle School in 2010. It’s designed to be educational and is not for significant environmental or financial gain, said MMPA Senior Associate Krystal Knutson.

But it still produces a significant amount of energy. At its full 160 kW output, Knutson said the turbine powers around 140 houses.

The city doesn’t pay for the turbine, Knutson added. Funds are collected through MMPA member rates and go toward infrequent refurbishments, like the one in early November.

“We’re trying to continue to educate our residents and the kids in school,” Romine said. “It’s more there for an education piece to increase awareness.”

The Carver County Environmental Center partnered with the University of Minnesota’s Extension Program to collect 27,000 pounds of plastic this year, Commissioner Randy Maluchnik said at a board meeting. It was waste destined to be burned or sent to the landfill.

At the Women’s PGA Tournament last summer, hosted in Chaska, nine tons of waste were diverted from landfills, Maluchnik said. It included more than five tons of edible food redistributed to families, totaling around 9,000 meals.

The city’s power supply comes from the Minnesota Municipal Power Agency. Most of MMPA's energy is from natural gas and fuel oil — around 400 mW per year, said Romine.

He said within MMPA, over 100 mW comes from wind, 8 mW from biomass and 7 mW from solar. The MMPA wants to garner 25% of its 12 associated cities’ power supply from renewable resources by 2025.

Chaska has adopted and surpassed that goal already, Romine said, but beyond that, the department doesn’t have its own environmental objectives.

“At some point we’ll get to 100% (renewable energy) but we’re definitely going to stay ahead of pace,” he said.

As far as water and air quality, environmental officials at the county and state level said it’s hard to say how the city is doing.

One problem area is the East Chaska Creek. The Lower Minnesota River Watershed District identified the creek as a source of sediment into the Minnesota River. After a 2015 erosion assessment, planning work began on stabilizing the channel. The $130,000 project is expected to be completed this winter.

“I can tell you that certainly our recycling efforts in Carver County are doing well,” said Greg Boe, environmental services department manager.

Brad Hanzel, acting government center supervisor with the county, said the city of Chaska requires recycling haulers to offer pickup. If a city’s population is more than 5,000, it must offer at least a monthly pickup service, per Minnesota state statute.

Chaskans can have their recycling picked up by five service collectors. Hanzel said the department used to request numbers for how many people used recycling services, but it wasn’t confident with the numbers haulers provided, so officials stopped asking.

As for collection at the county’s environmental center, Boe said the hazardous waste drop-off site remains “extremely busy.” The center offers disposal sites and resources for being greener, but does not provide environmental testing or data.

WHAT OTHER CITIES DO

Chaska’s population hovers around 26,000, according to the most-recent U.S. Census report. It’s comparable to other cities in the Twin Cities metro area with environmental boards, such as Chanhassen and Shoreview, and those that don’t, like White Bear Lake.

Chanhassen, smaller than Chaska in population by about 1,000, has an environmental commission. The Chanhassen Environmental Commission is made of seven people, meeting monthly and providing yearly sustainability reports.

The city also has a environmental resource specialist, Jill Sinclair, who works Monday through Thursday. She’s been at her role for 25 years.

Sinclair’s main job is dealing with forestry planning and issues in the city. In addition, she troubleshoots recycling problems, helps community gardens flourish, focuses on development plans, and oversees most other environmental-related issues besides water care.

Chanhassen started its GreenStep program in August 2018. City Manager Todd Gerhardt said the city joined because it was already doing many of the things that could qualify it to be a GreenStep city, like moving to LED lights and starting solar garden programs.

The Chanhassen Environmental Commission participates in energy efficiency workshops, invites guest speakers to its meetings, and regularly checks in on GreenStep progress.

The program simply helped the city follow its progress, he said.

He said Chanhassen is doing many of the same things it did before becoming a GreenStep city and thinks it’s up to each city if they want to join.

“There’s some cities that don’t believe in it and don’t feel as if they need to monitor the improvements that they’re making to their systems. They’re just doing it because they know it’s right,” Gerhardt said.

In Shoreview, the nine-member Environmental Quality Committee meets monthly and gives recommendations to the Shoreview City Council based on committee studies and reviews.

Ellen Brenna is the natural resources coordinator for Shoreview. She said the city joined the GreenSteps program around 2013 and now sits at a level five.

Shoreview’s Environmental Quality Committee is led by residents, not elected officials. Much of the committee’s goal, Brenna said, is to help the public live greener.

“It’s important to increase awareness,” she said. “There’s really a lot of little things that people can do to make a difference.”

This year, the committee will introduce a pilot program for organics recycling and continue recognizing residents who have done important environmental work. The city even won GreenStep’s Sustainable City Award for its Water Consumption and Groundwater Awareness Project.

“Sustainability and environmental stewardship is something that’s important to our entire staff and our residents,” Brenna said.

Shoreview, like Chaska, was doing many of the things that would qualify the city to be at a GreenStep level two when it joined. From there, the city and committee decided to keep moving forward with the program to meet its own environmental goals and show improvement across various metrics every year.

While in the GreenStep program, Shoreview has kept track of its progress, like cutting down on chlorine usage for winter road salt, increasing storm drain cleaning, and growing more pollinator-friendly plants.

Brenna said the program helps residents bring important environmental issues to the city’s attention. It gets residents and officials thinking through a greener lens, she said.

At the end of the day, she said she encourages cities like Chaska to consider joining — they might be greener than they think, and that progress can lead to more goals and accountability down the line.

“I think a lot of times a city doesn’t realize how well a city is doing until you fill out a GreenStep questionnaire, and you realize you’re already on step two,” she said.

How to be greener 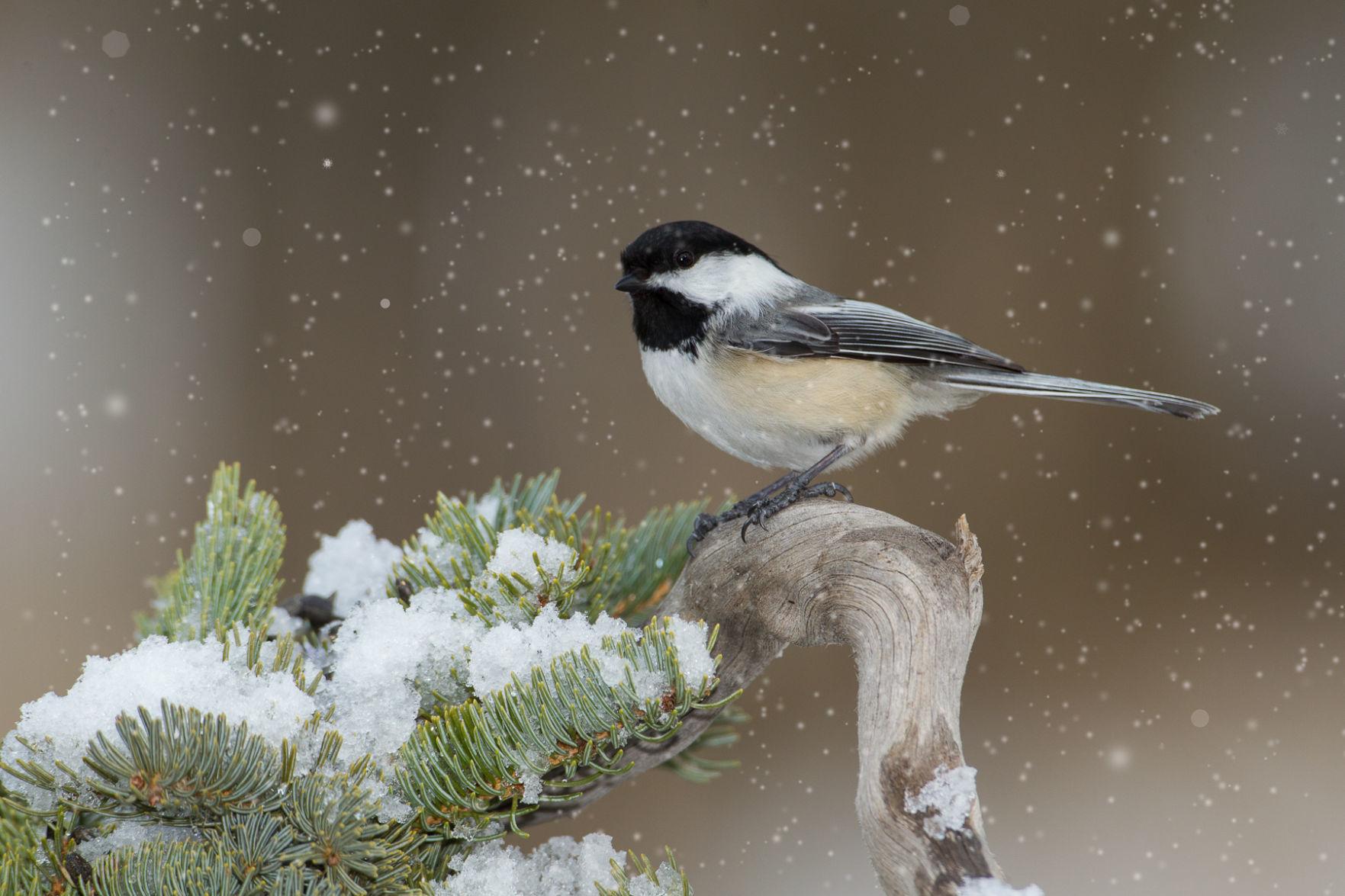 Wintering birds, such as this black-capped chickadee, can more than double their number of feathers in preparation for winter. 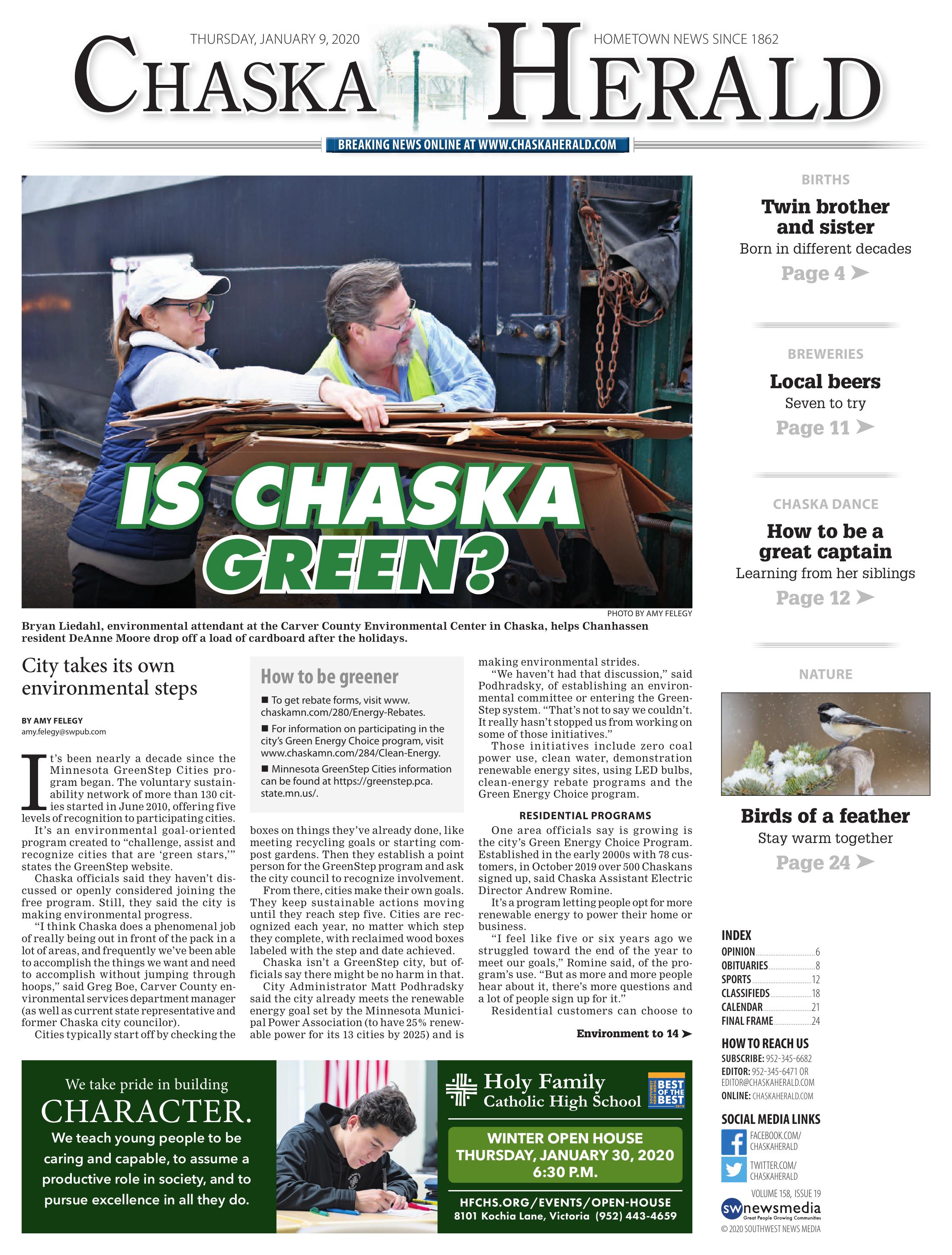