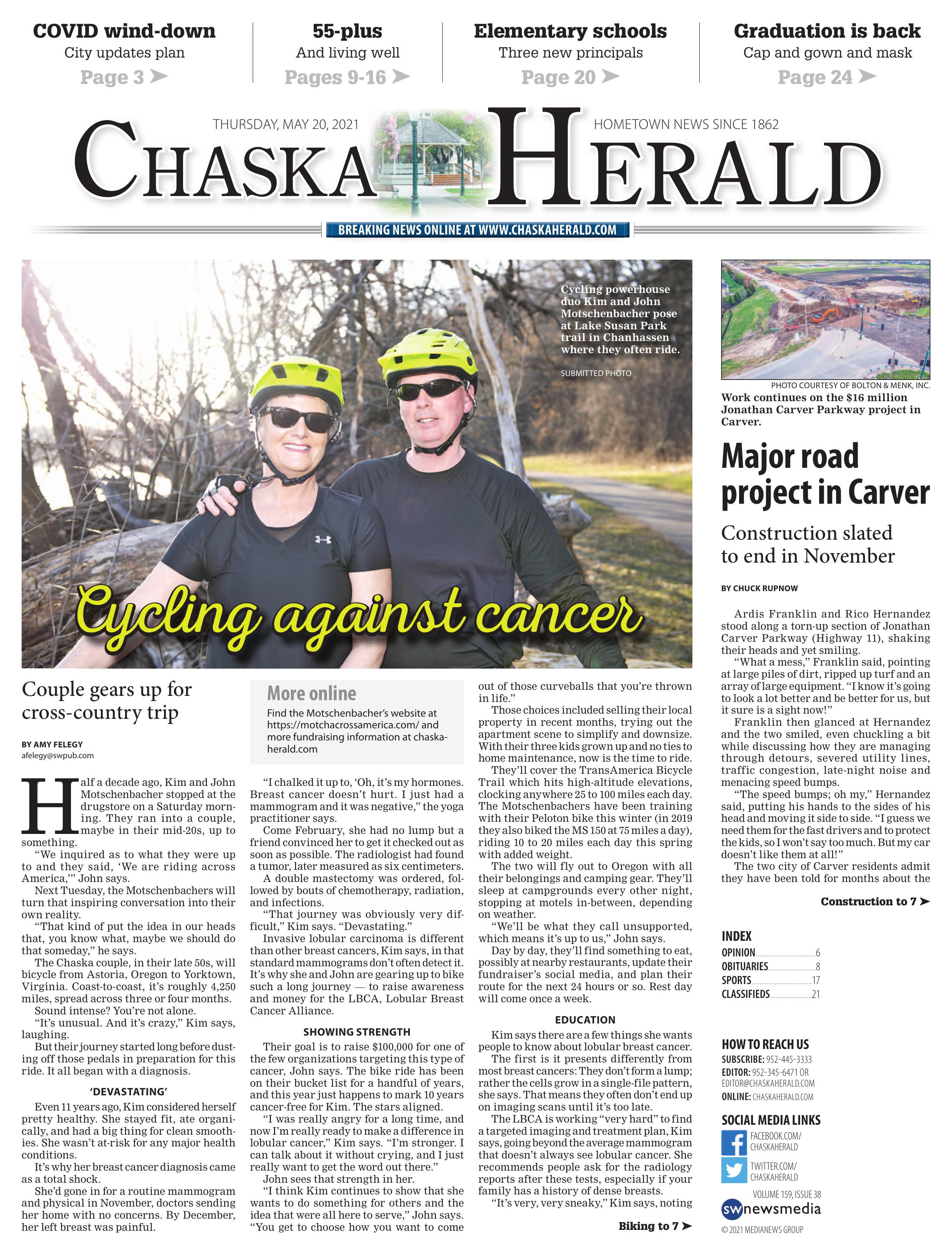 Kim and John Motschenbacher are biking across the country to raise money and awareness for lobular breast cancer.

Half a decade ago, Kim and John Motschenbacher stopped at the drugstore on a Saturday morning. They ran into a couple, maybe in their mid-20s, up to something.

“We inquired as to what they were up to and they said, ‘We are riding across America,'” John says.

Next Tuesday, the Motschenbachers will turn that inspiring conversation into their own reality.

“That kind of put the idea in our heads that, you know what, maybe we should do that someday,” he says.

The Chaska couple, in their late 50s, will bicycle from Astoria, Oregon to Yorktown, Virginia. Coast-to-coast, it’s roughly 4,250 miles, spread across three or four months.

But their journey started long before dusting off those pedals in preparation for this ride. It all began with a diagnosis.

Even 11 years ago, Kim considered herself pretty healthy. She stayed fit, ate organically, and had a big thing for clean smoothies. She wasn’t at-risk for any major health conditions.

It’s why her breast cancer diagnosis came as a total shock.

She’d gone in for a routine mammogram and physical in November, doctors sending her home with no concerns. By December, her left breast was painful.

“I chalked it up to, ‘Oh, it’s my hormones. Breast cancer doesn’t hurt. I just had a mammogram and it was negative,” the yoga practitioner says.

Come February, she had no lump but a friend convinced her to get it checked out as soon as possible. The radiologist had found a tumor, later measured as six centimeters.

“I was really angry for a long time, and now I’m really ready to make a difference."

A double mastectomy was ordered, followed by bouts of chemotherapy, radiation, and infections.

Invasive lobular carcinoma is different than other breast cancers, Kim says, in that standard mammograms don’t often detect it. It’s why she and John are gearing up to bike such a long journey — to raise awareness and money for the LBCA, Lobular Breast Cancer Alliance.

Their goal is to raise $100,000 for one of the few organizations targeting this type of cancer, John says. The bike ride has been on their bucket list for a handful of years, and this year just happens to mark 10 years cancer-free for Kim. The stars aligned.

“I was really angry for a long time, and now I’m really ready to make a difference in lobular cancer,” Kim says. “I’m stronger. I can talk about it without crying, and I just really want to get the word out there.”

John sees that strength in her.

I think Kim continues to show that she wants to do something for others and the idea that were all here to serve,” John says. “You get to choose how you want to come out of those curveballs that you’re thrown in life.”

Those choices included selling their local property in recent months, trying out the apartment scene to simplify and downsize. With their three kids grown up and no ties to home maintenance, now is the time to ride.

They’ll cover the TransAmerica Bicycle Trail which hits high-altitude elevations, clocking anywhere 25 to 100 miles each day. The Motschenbachers have been training with their Peloton bike this winter (in 2019 they also biked the MS 150 at 75 miles a day), riding 10 to 20 miles each day this spring with added weight.

“We’ll be what they call unsupported, which means it’s up to us,” John says.

The two will fly out to Oregon with all their belongings and camping gear. They’ll sleep at campgrounds every other night, stopping at motels in-between, depending on weather.

Day by day, they’ll find something to eat, possibly at nearby restaurants, update their fundraiser’s social media, and plan their route for the next 24 hours or so. Rest day will come once a week.

Kim says there are a few things she wants people to know about lobular breast cancer.

The first is it presents differently from most breast cancers: They don’t form a lump; rather the cells grow in a single-file pattern, she says. That means they often don’t end up on imaging scans until it's too late.

The LBCA is working “very hard” to find a targeted imaging and treatment plan, Kim says, going beyond the average mammogram that doesn’t always see lobular cancer. She recommends people ask for the radiology reports after these tests, especially if your family has a history of dense breasts.

“It’s very, very sneaky,” Kim says, noting its harder to detect promptly. “Most people do not know about lobular breast cancer. They go and get their mammogram and it’s negative and they just go on their merry way.”

That happened to two acquaintances with fatal cases. Though most breast cancers don’t usually cause pain, this one does, Kim says. It's why she recommends people visit their doctor if they have pain lasting longer than two weeks.

Hers probably had been growing for a minimum of six years before reaching stage 3C during diagnosis, her doctor says, which is why her team is keeping a close eye on her.

Kim will see her oncologist every six months for the rest of her life, making sure it doesn’t reappear.

But as for the next few months, the Motschenbachers are turning to the open road and hoping for the same thing.

“Our world has been in such disarray,” Kim says, noting the ride will help them focus on something else. “We’re just gonna take a day at a time.”

Jonathan Carver Parkway is being expanded from a two-lane to a four-lane road.

Ardis Franklin and Rico Hernandez stood along a torn-up section of Jonathan Carver Parkway (Highway 11), shaking their heads and yet smiling.

“What a mess,” Franklin said, pointing at large piles of dirt, ripped up turf and an array of large equipment. “I know it’s going to look a lot better and be better for us, but it sure is a sight now!”

Franklin then glanced at Hernandez and the two smiled, even chuckling a bit while discussing how they are managing through detours, severed utility lines, traffic congestion, late-night noise and menacing speed bumps.

“The speed bumps; oh my,” Hernandez said, putting his hands to the sides of his head and moving it side to side. “I guess we need them for the fast drivers and to protect the kids, so I won’t say too much. But my car doesn’t like them at all!”

The two city of Carver residents admit they have been told for months about the massive road construction effort this summer, which includes several weekend closures of JCP and other closures over the summer.

“I can’t wait for this to be done; and I’m sure several years from now when I’m enjoying the new road, I will have forgotten the inconvenience this all was,” Franklin said. “I’ll be a lot happier then.”

Carver County Construction Supervisor Shelby Sovell, the county’s lead engineer on the JCP project, recently said email blasts and website updates have done well to inform the public about the status of the project.

Sovell said minimal frost and good spring weather assisted in getting a good start on the project.

“Most everyone has been very understanding of the project,” he said, adding that the various entities involved with the construction effort have not run into anything unexpected.

“There was a lot more traffic congestion than we expected during the school morning rush hour that overwhelmed the signal system there,” Sovell said. “We had to quickly adapt to that.”

“There was some frustration early on,” Johnson said. “It got figured out and so many have helped and drivers have come to understand the situation.”

Sovell expects there will be a mixture of turnaround traffic and upset drivers during stage 2 of the project, which closes JCP to all traffic from Ironwood Drive to 6th Street. That will be closed when Carver Elementary closes next month until reopening in August. Work began in March and is slated to end in November 2021.

“Eventually, people will get the hang of the detours and figure out what is best for them,” Sovell said. “When roads are closed, it only means work is getting done faster.”

And as for those speed bumps, well, more are expected as the construction continues.

“Great,” Hernandez said. “All I can do is leave for my drive a bit earlier and smile as I go over them, knowing that someday I will celebrate that they are gone and the work is done.”

More information about the JCP construction project can be found at: co.carver.mn.us/jcpimprovements and cityofcarver.com/101/projects.