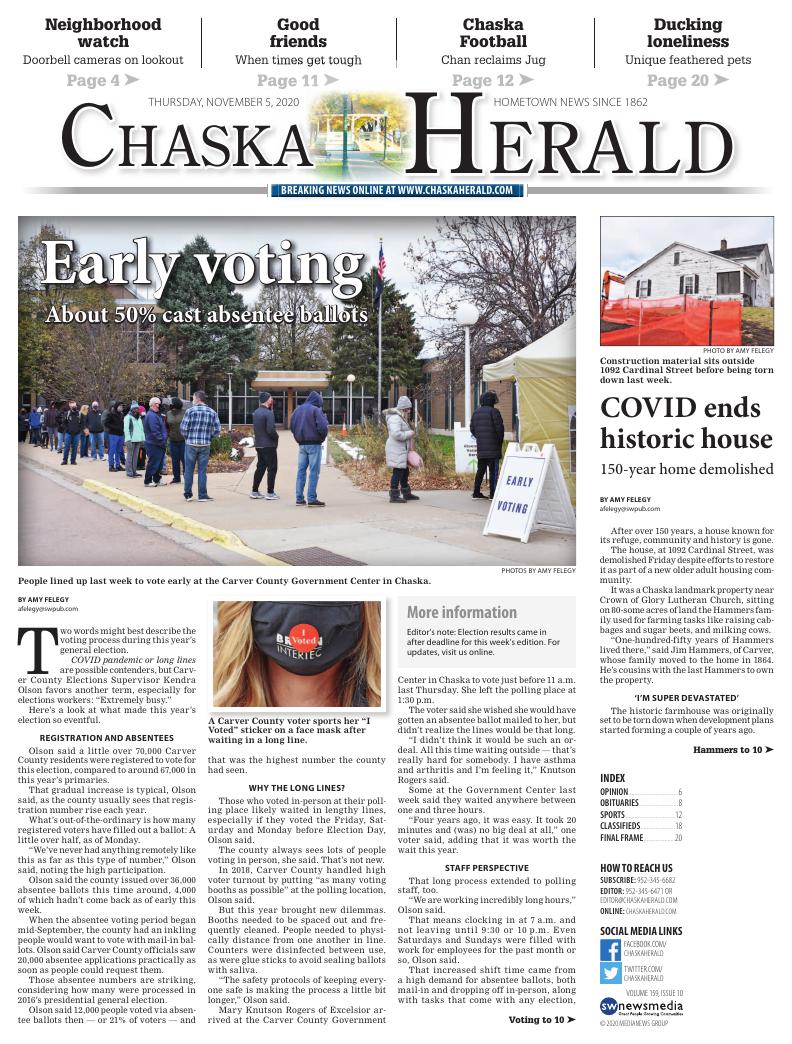 People lined up last week to vote early at the Carver County Government Center in Chaska.

A Carver County voter sports her “I Voted” sticker on a face mask after waiting in a long line.

Early voters lined up outside the Carver County Government Center last Thursday, while an absentee voting sign directed those with ballots to another area.

Two words might best describe the voting process during this year’s general election.

Here’s a look at what made this year’s election so eventful.

Olson said a little over 70,000 Carver County residents were registered to vote for this election, compared to around 67,000 in this year’s primaries.

That gradual increase is typical, Olson said, as the county usually sees that registration number rise each year.

What’s out-of-the-ordinary is how many registered voters have filled out a ballot: A little over half, as of Monday.

“We’ve never had anything remotely like this as far as this type of number,” Olson said, noting the high participation.

Olson said the county issued over 36,000 absentee ballots this time around, 4,000 of which hadn’t come back as of early this week.

When the absentee voting period began mid-September, the county had an inkling people would want to vote with mail-in ballots. Olson said Carver County officials saw 20,000 absentee applications practically as soon as people could request them.

Those absentee numbers are striking, considering how many were processed in 2016’s presidential general election.

Olson said 12,000 people voted via absentee ballots then — or 21% of voters — and that was the highest number the county had seen.

WHY THE LONG LINES?

Those who voted in-person at their polling place likely waited in lengthy lines, especially if they voted the Friday, Saturday and Monday before Election Day, Olson said.

The county always sees lots of people voting in person, she said. That’s not new.

In 2018, Carver County handled high voter turnout by putting “as many voting booths as possible” at the polling location, Olson said.

But this year brought new dilemmas. Booths needed to be spaced out and frequently cleaned. People needed to physically distance from one another in line. Counters were disinfected between use, as were glue sticks to avoid sealing ballots with saliva.

“The safety protocols of keeping everyone safe is making the process a little bit longer,” Olson said.

Mary Knutson Rogers of Excelsior arrived at the Carver County Government Center in Chaska to vote just before 11 a.m. last Thursday. She left the polling place at 1:30 p.m.

The voter said she wished she would have gotten an absentee ballot mailed to her, but didn’t realize the lines would be that long.

“I didn’t think it would be such an ordeal. All this time waiting outside — that’s really hard for somebody. I have asthma and arthritis and I’m feeling it,” Knutson Rogers said.

Some at the Government Center last week said they waited anywhere between one and three hours.

“Four years ago, it was easy. It took 20 minutes and (was) no big deal at all,” one voter said, adding that it was worth the wait this year.

That long process extended to polling staff, too.

That means clocking in at 7 a.m. and not leaving until 9:30 or 10 p.m. Even Saturdays and Sundays were filled with work for employees for the past month or so, Olson said.

That increased shift time came from a high demand for absentee ballots, both mail-in and dropping off in-person, along with tasks that come with any election, like training election judges and testing equipment.

“Our big challenge in all these extra hours is not only the volume of absentee voters, but (we) can’t get tasks done until after we’ve finished serving voters,” Olson said.

Mail-in, drop-off, and in-person ballots received no later than Election Day (Nov. 3) will be collected and counted, Olson said.

Depending on a recent Court of Appeals ruling, absentee ballots not received by Nov. 3 may not be counted, even if postmarked by then.

Results released on Election Day are incomplete unofficial results, but are updated daily through the county.

Olson said positions like county commissioner and state senator will be finalized by Friday, Nov. 13. The presidential results could take longer, she said.

With this year’s extraordinary circumstances, Olson said she’s grateful for the patience voters have given the whole process. Most people have been understanding of this year’s complexities and unknowns, she said.

“We look at this as a team effort between Carver County elections staff and the voters to get through this together,” Olson said.

Editor's note: Election results came in after deadline for this week's edition. For updates, visit us online.

Construction material sits outside 1092 Cardinal Street before being torn down last week.

Dumpsters sit on Cardinal Street outside the old Hammers home before being demolished Oct. 30.

After over 150 years, a house known for its refuge, community and history is gone.

The house, at 1092 Cardinal Street, was demolished Friday despite efforts to restore it as part of a new older adult housing community.

It was a Chaska landmark property near Crown of Glory Lutheran Church, sitting on 80-some acres of land the Hammers family used for farming tasks like raising cabbages and sugar beets, and milking cows.

“One-hundred-fifty years of Hammers lived there,” said Jim Hammers, of Carver, whose family moved to the home in 1864. He’s cousins with the last Hammers to own the property.

The historic farmhouse was originally set to be torn down when development plans started forming a couple of years ago.

That’s when Chaska resident Kierstin Case, who had no connection to the farm or family, stepped in. Earlier this year, Case told the Herald of her plans: Refurbish the home, give it much-needed upgrades for safety and appearance, and use it as a rental home.

“A bed-and-breakfast, minus the breakfast,” Case said.

She and developers at Pulte Homes of Minnesota came to an agreement, even incorporating the old house in the new plans. Things were looking up.

It wouldn’t be torn down as long as she made measurable progress by a certain point. They agreed the house needed to be picture-perfect by the time potential buyers drove by to check out the new homes.

She said she asked two dozen banks for a loan in the past six or so months, trying to secure around $200,000. But with a faltering tourism industry and uncertain rental prospects, the end of the road had arrived.

“There’s so much of that story that’s going to be lost because of the loss of the building. When it’s not there, there’s nothing to wonder about."

Lenders offered to reconsider in January or the spring, but Pulte had already given Case the agreed-upon extension.

In September, Case realized she didn’t have the funding to move forward, even after going through her personal savings. The first day of October arrived, and she told Pulte she’d be pulling out. The house was theirs to tear down.

“I didn’t have that time for Pulte to wait,” Case said. “I let them know, and they exercised that right to reclaim their property.”

Case said developers at Pulte were fair through the process. A deal is a deal, though this one stung.

“I’m just so, so, so, so sad,” she said. “Everything was a go. Everything was just a matter of the bank writing me the funds, and as soon as COVID happened (the banks) relooked every loan that hadn’t been signed. They put a hold on everything.”

On Pulte’s side, the house’s demise wasn’t expected until “the 11th hour,” Director Paul Heuer said. He called the ordeal an “emotional topic” for people involved.

“There was a desire to preserve it and we put a lot of time, energy, and money into working with the taker of the home to make it work,” Heuer said. “We know that was a priority and we tried our hardest to make it happen.”

He said developers are still deciding what will replace the old home in future plans.

Hammers, who lives in Carver, remembers working at the farm when he was just a child. He’d spray disinfectant on cows to rid the flies, then venture with his dad Jim (who was the milkman in Chaska for several decades) to bottle milk, he said.

“I could give you memory after memory on every building up on the farm,” Hammers said. “I’m sad.”

According to notes from Julie Wiese, vice president of the Chaska Historical Society, the home originally had three rooms and add-ons were built later. The basement offered a coal furnace, canned goods and potatoes.

After German immigrants Henrik and Regina Hamers (with one “m” then) bought the home in the 1860s, it became a popular spot to recharge. At the top of a hill, horse-drawn wagons made both the animals and drivers ready for a drink and rest, according to the Historical Society.

Hammers said a few original rooms remained, while other parts of the house like the front porch changed through the years.

Society President Lisa Oberski said news of the home’s demolition led to a night of pondering.

“Overnight I started thinking about we have a lot of wonderful things in place for maintaining historicity,” she said. “The Hammers house is another reminder of how we need to broaden our sense of what constitutes historicity.”

Oberski offered a metaphor: It’s like labeling a cemetery’s gravestone as “just a stone” instead of learning about that person’s past and other important context.

Rather than “just a house,” she said the Hammers property functioned as a source of community in its heyday.

“There’s so much of that story that’s going to be lost because of the loss of the building. When it’s not there, there’s nothing to wonder about,” Obserski said.

As for Case, her hope hasn’t corroded.

Though she said it’s hard to admit defeat to something so out of her control, it’s not the last opportunity to hold onto local history.

“As I hear of new buildings being demolished, I think I’ll be the first one back out there saying, ‘Please, let me have a go at it.’” 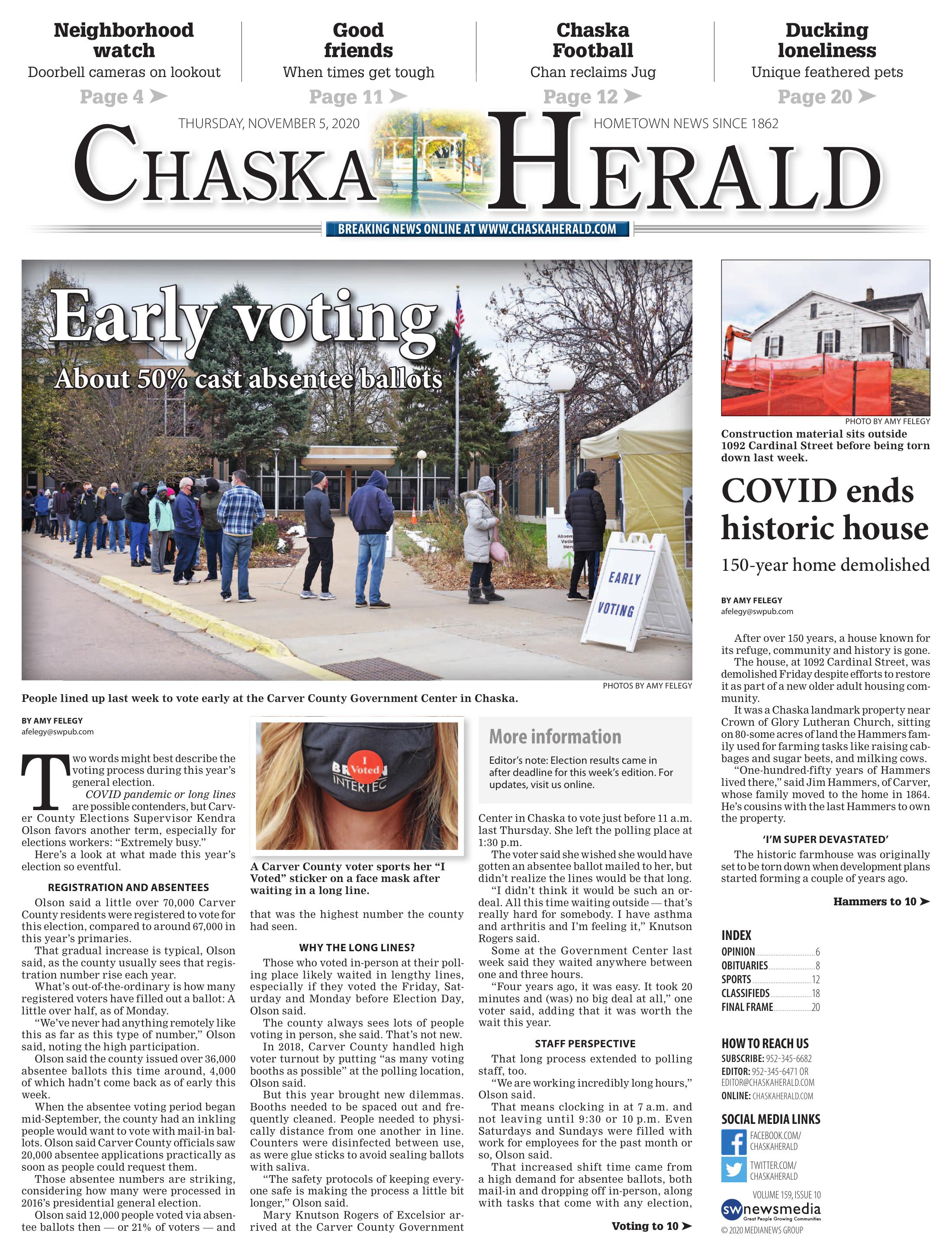