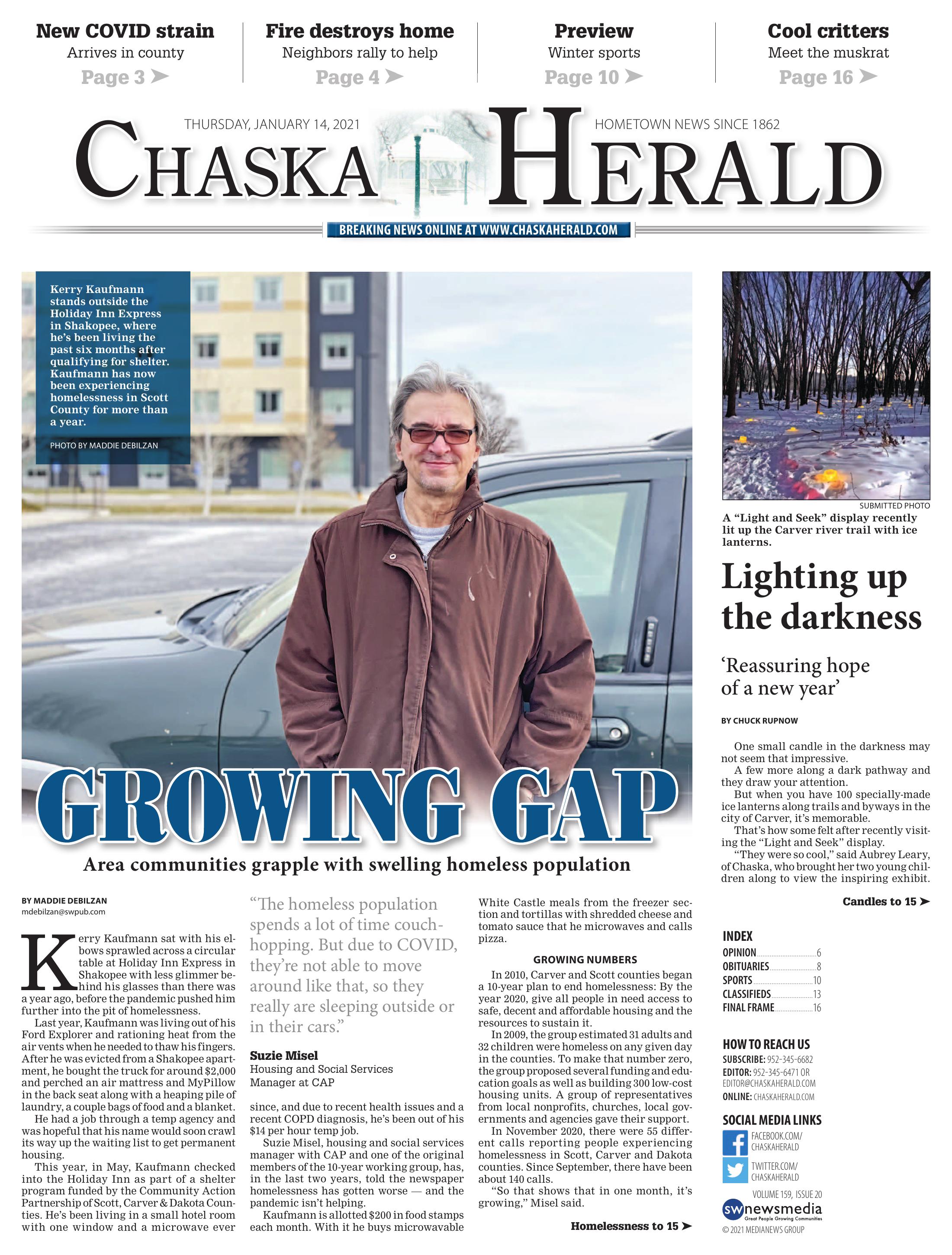 In November 2020, there were 55 different calls reporting people experiencing homelessness in Scott, Carver and Dakota counties. Since September, there have been about 140 calls.

An end to the pandemic is in sight, which also means the end of Gov. Tim Walz’s moratorium on evictions is hovering. And the CAP Agency worries many residents who haven’t been paying rent the past six months won’t be able to catch up.

Within the CAP agency’s region, Misel said they’ve received 1,300 calls for housing-related assistance in Scott and Carver counties since Jan. 1, 2020, and of those callers, 475 were homeless. But the agency fears many more residents may be pushing off applying for assistance because of the eviction moratorium.

The governor’s peacetime emergency declaration, which encompasses the eviction moratorium, is currently scheduled to expire on Jan. 13 (after this newspaper went to press), but it could be extended.

On top of that, Erik Gentry, director of Housing and Emergency Services for the CAP Agency, said despite the moratorium on evictions there are still landlords demanding money and threatening evictions.

But there’s still a long way to go for Gentry, Misel and CAP Agency partners set out to tackle homelessness in the area. There’s still an Excel spreadsheet with a list too long to look at without scrolling, with notes next to names: a van parked in Waconia; a 23-year-old woman sleeping in a tent; a car parked outside Walmart.

A “Light and Seek” display recently lit up the Carver river trail with ice lanterns.

“Lanterns were placed along the river trail to encourage both the delight of discovery and social distancing,” said Anna Edlund, with the nonprofit Funky Minds in Carver.

One small candle in the darkness may not seem that impressive.

A few more along a dark pathway and they draw your attention.

But when you have 100 specially-made ice lanterns along trails and byways in the city of Carver, it’s memorable.

That’s how some felt after recently visiting the “Light and Seek” display.

“They were so cool,” said Aubrey Leary, of Chaska, who brought her two young children along to view the inspiring exhibit. “There was a sense of peace about it all. Just the way we wanted to end 2020 and look forward to 2021.”

That’s the kind of response desired by Anna Edlund and Shelley Rudolf, co-founders of the nonprofit Funky Minds in Carver, which was instrumental in the presentation.

The “Light and Seek” display, which ran Dec. 30 through Jan. 1, was the second phase of the Strings of Connection community effort.

“Lanterns were placed along the river trail to encourage both the delight of discovery and social distancing,” Edlund said, adding that crossing the lantern-lit pedestrian bridge exemplified saying good-bye to 2020 and crossing back over the bridge welcomed in 2021.

Edlund said it was “picturesque” to see a full moon and steam rising over the Minnesota River on New Year’s Eve, and seeing twinkling lights on the hillside from the downtown levee.

“As a community, we have shared the weariness of 2020,” she added. “This event created an opportunity to share in the reassuring hope of a new year.”

For Edlund, one of the more meaningful aspects of the effort was the “calming stillness of the night and the welcome laughter of children and families along the trail.”

“It was so nice to have the kids out; laughing and just enjoying nature on a great night,” Leary said. “Plus, it wore them out!”

Edlund and her children, Eliza, 22, and Peter, 19, made the ice lanterns, averaging about 20 a day when the temperatures got cold enough to store them outside.

Electronic votive candles were used instead of real candles.

Edlund and others involved with the display were pleased with the community taking advantage of the lanterns. The community was encouraged to collect them after the showing “because it’s symbolism of having gathered together,” Edlund said.

“Just hearing a relief in people; that there is something beautiful outside that they could enjoy and do with their families, was so nice,” Edlund said. “That’s the beauty of it. And, if something as simple as frozen water brings people together, why not?”