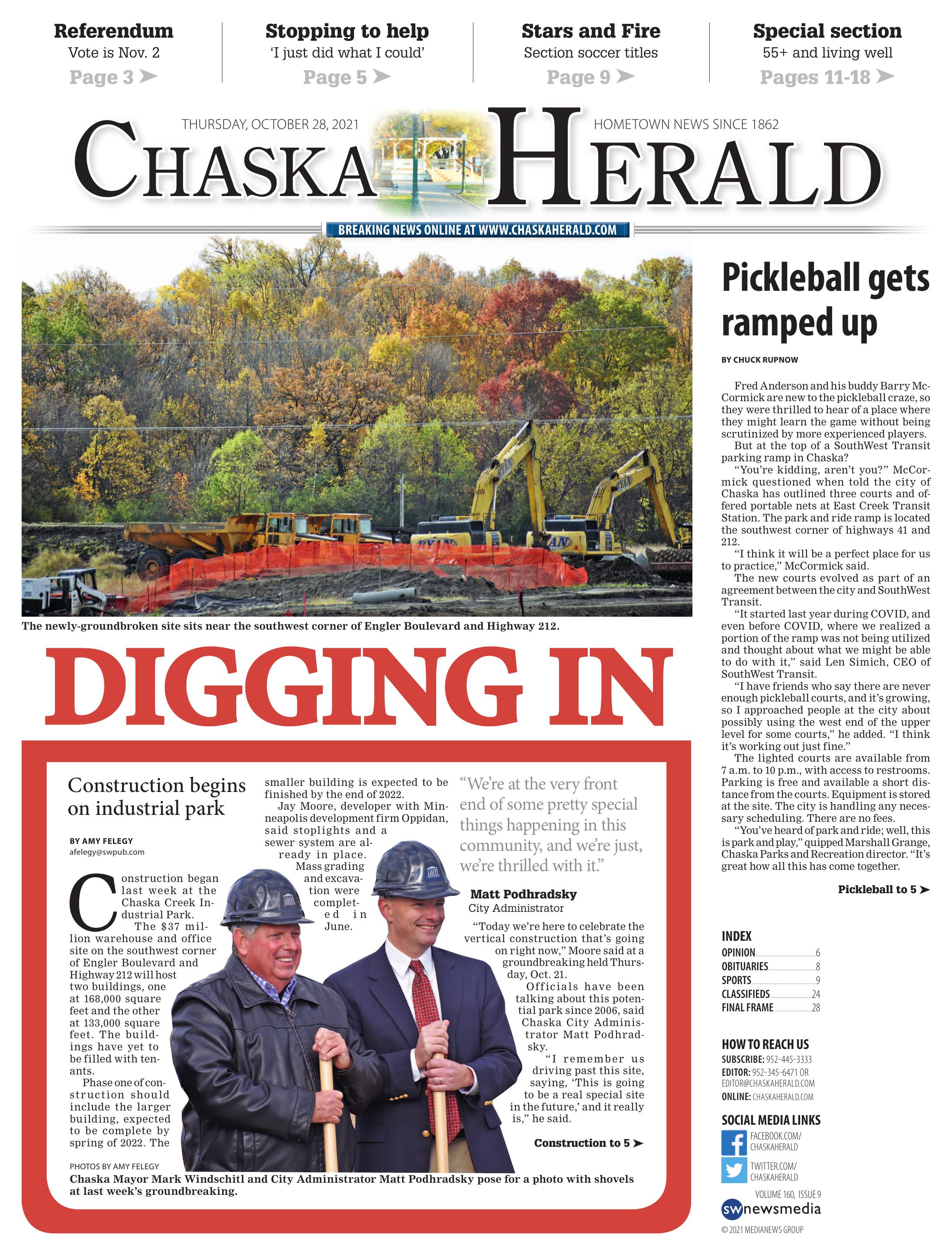 ‘I just did what I could’

The newly-groundbroken site sits near the southwest corner of Engler Boulevard and Highway 212.

A rendering image shows a likely design of one of two incoming buildings.

Construction has begun on an 80-plus acre lot in Chaska, home to its incoming industrial park.

The $37 million warehouse and office site on the southwest corner of Engler Boulevard and Highway 212 will host two buildings, one at 168,000 square feet and the other at 133,000 square feet. The buildings have yet to be filled with tenants.

Jay Moore, developer with Minneapolis development firm Oppidan, said stoplights and a sewer system are already in place. Mass grading and excavation were completed in June.

Officials have been talking about this potential park since 2006, said Chaska City Administrator Matt Podhradsky.

“I remember us driving past this site, saying, ‘This is going to be a real special site in the future,’ and it really is,” he said.

A big plus to the industrial park is it will likely drive job- and tax-based growth, Podhradsky said, though exactly how much is unknown until tenants move into the space.

“We’re at the very front end of some pretty special things happening in this community, and we’re just, we’re thrilled with it,” Podhradsky said.

Chaska Mayor Mark Windschitl said it’s time for business development, especially after housing booms across the southwest metro in recent years. He said more projects like this could be in store in the near future.

“We’re really excited because we’re the only (nearby city) really doing a commercial development,” Windschitl said. “If you build it, they will come in here.”

“We're at the very front end of some pretty special things happening in this community, and we're just, we're thrilled with it."

Pickleball is now available, through the city of Chaska, on top of the East Creek Transit Station.

Fred Anderson and his buddy Barry McCormick are new to the pickleball craze, so they were thrilled to hear of a place where they might learn the game without being scrutinized by more experienced players.

But at the top of a SouthWest Transit parking ramp in Chaska?

“You’re kidding, aren’t you?” McCormick questioned when told the city of Chaska has outlined three courts and offered portable nets at East Creek Transit Station. The park and ride ramp is located the southwest corner of highways 41 and 212.

“I think it will be a perfect place for us to practice,” McCormick said.

The new courts evolved as part of an agreement between the city and SouthWest Transit.

“It started last year during COVID, and even before COVID, where we realized a portion of the ramp was not being utilized and thought about what we might be able to do with it,” said Len Simich, CEO of SouthWest Transit.

“I have friends who say there are never enough pickleball courts, and it’s growing, so I approached people at the city about possibly using the west end of the upper level for some courts,” he added. “I think it’s working out just fine.”

The lighted courts are available from 7 a.m. to 10 p.m., with access to restrooms. Parking is free and available a short distance from the courts. Equipment is stored at the site. The city is handling any necessary scheduling. There are no fees.

“You’ve heard of park and ride; well, this is park and play,” quipped Marshall Grange, Chaska Parks and Recreation director. “It’s great how all this has come together.

“When I met with Len, I thought the courts were a great idea. Everyone we spoke with gave it a thumbs up,” Grange said. “I think the word is getting out. I’m not sure how much use it will get yet this year, but pickleballers are a hardy group.”

Use of the self-service, portable pickleball nets is not new, with players having to utilize them when the sport was originally incorporated at Lions Park, Grange said.

Grange said the public might be seeing more programs and events at that ramp.

“We will hit the ground running a little more next spring with pickleball there, but there could also be other things there; like a fitness class, Halloween event or even remote control cars; who know? I think things like this, entities working together on helping the public, may lead to others thinking about what they might do with their available spaces,” Grange said.

“If I’m leery of playing pickleball in front of others, I’m certainly not doing a fitness class in public,” Anderson said, getting a laugh from McCormick. “That would shut the ramp down for sure.”

More information can be found at the city of Chaska and Chaska Community Center websites.