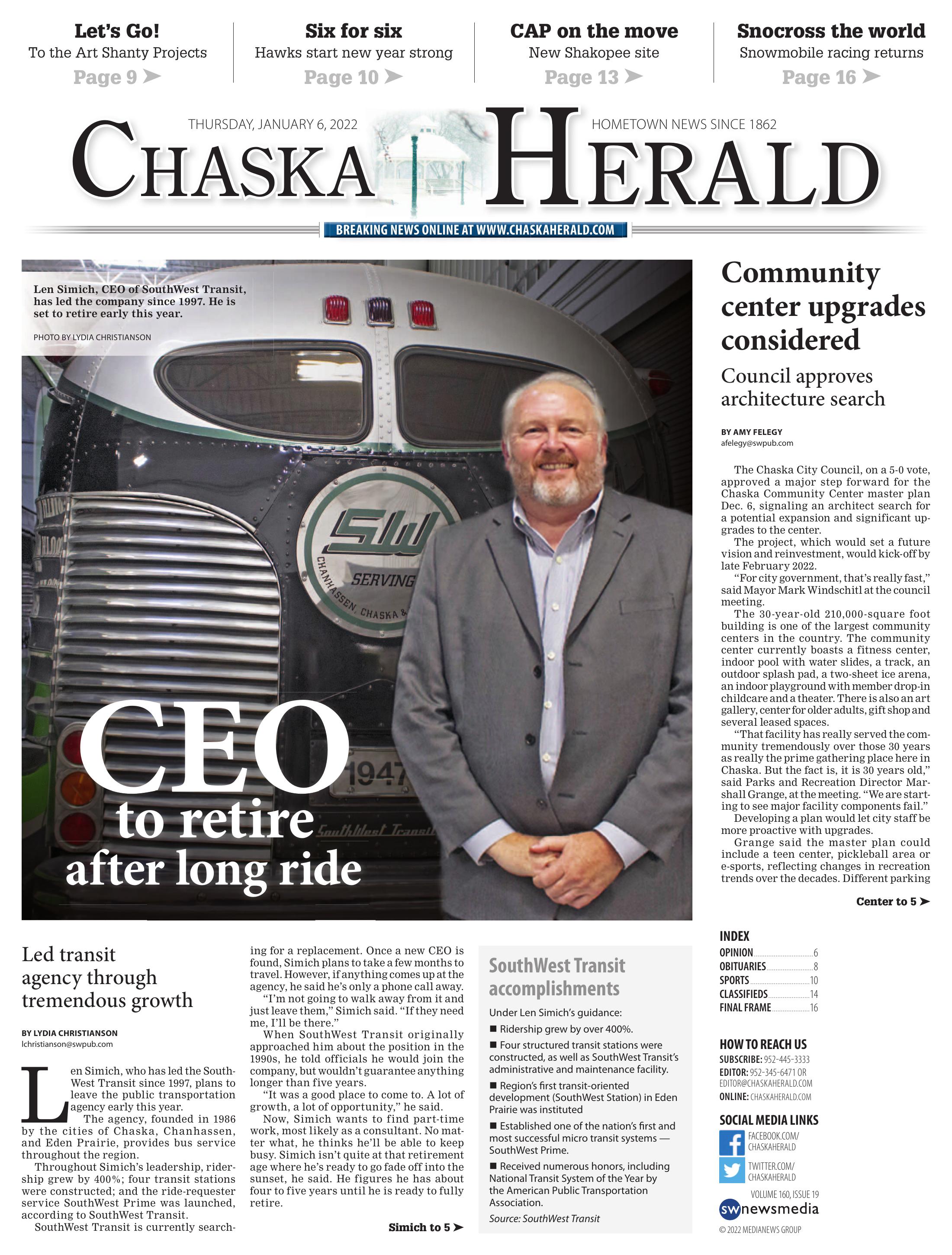 Len Simich, CEO of SouthWest Transit, has led the company since 1997. He is set to retire early this year.

Len Simich, who has led the SouthWest Transit since 1997, plans to leave the public transportation agency early this year.

The agency, founded in 1986 by the cities of Chaska, Chanhassen, and Eden Prairie, provides bus service throughout the region.

Throughout Simich’s leadership, ridership grew by 400%; four transit stations were constructed; and the ride-requester service SouthWest Prime was launched, according to SouthWest Transit.

SouthWest Transit is currently searching for a replacement. Once a new CEO is found, Simich plans to take a few months to travel. However, if anything comes up at the agency, he said he’s only a phone call away.

“I’m not going to walk away from it and just leave them,” Simich said. “If they need me, I’ll be there.”

When SouthWest Transit originally approached him about the position in the 1990s, he told officials he would join the company, but wouldn’t guarantee anything longer than five years.

“It was a good place to come to. A lot of growth, a lot of opportunity,” he said.

Now, Simich wants to find part-time work, most likely as a consultant. No matter what, he thinks he’ll be able to keep busy. Simich isn’t quite at that retirement age where he’s ready to go fade off into the sunset, he said. He figures he has about four to five years until he is ready to fully retire.

For now, Simich will continue working on everything from operational issues to construction to budgeting to setting SouthWest Transit’s legislative platform.

Over his time at the company, Simich learned about himself when challenges arose, such as dealing with the pandemic, layoffs and after the 9/11 terrorist attacks. But Simich said he didn’t do it alone. He had a good team of people that could rely on each other, he added.

“This place has been my home for well over 25 years and I owe them a lot,” Simich said.

SouthWest Transit is currently looking for someone to take over Simich’s role as CEO. He plans to retire between January and May of this year. After he retires from SouthWest, he will look for part-time work, possibly as a consultant.

The past couple years have been challenging for SouthWest Transit and the transit industry as a whole.

Since the emergence of COVID-19, SouthWest Transit’s commuter express ridership has been down about 75%. The reason being that downtown Minneapolis, the company’s bread and butter, hasn’t come back to what it was pre-pandemic, Simich said.

Declining ridership hasn’t stopped SouthWest Transit from making improvements to their buses. The company has added air purification systems, plexiglass dividers and buses are rotated after each shift so they can be deep cleaned, Simich said.

“We’re doing everything we can do to make that as safe as possible but people are apprehensive still, and I get it,” Simich said.

SouthWest Transit is in close contact with major employers downtown and they’ve already said going back to the office will look different, Simich said, with employees perhaps spending two or three days a week in the office and working remotely the remainder of the time.

Mike Dartt, SouthWest Transit facilities manager, has worked with Simich since he started with the company. The two work closely, as does the entire organization, he said, adding they are all like a big family.

Dartt started at the company as a driver and has worked in a number of different roles before becoming the facilities manager.

According to Dartt, one of Simich’s greatest attributes is his eye for innovation — whether it’s the SouthWest coach buses; the SW Prime system, which operates similar to Uber; or even the company’s color scheme. He also challenges SouthWest Transit employees to be better every day, Dartt said.

Not only has Simich been a good person to work with, he’s also been a good friend, Dartt said.

Working for Simich has “not always been easy, but it’s always been a pleasure to work for him because you know where you stand with him,” Dartt said. “He always has my back as far as I’m concerned.”

According to Fyten, he owes everything to Simich when it comes to his career. Simich is willing to give people opportunities to succeed in their roles, he said. Fyten started at the company as an intern and was able to grow within his role.

“He was very clear in terms of his expectations … but he also was very good at ensuring that I had the knowledge and the resources to be successful in my role,” Fyten said. “I think that permeated throughout the entire organization.”

Simich believes that every employee at SouthWest Transit is important to the success of the company, Fyten said. Whether someone is a mechanic, janitor or in administration, he treats everyone with the same amount of respect. He is an approachable, good guy, he added.

According to Fyten, Simich is the reason why SouthWest Transit is what it is today, in regard to the high quality stations, vehicles and customer service. While it takes an entire team to make that happen, it also requires an exceptional level of leadership, he said.

“I can’t say enough in terms of what he’s meant to I think this organization in terms of where he’s brought it and then also what he’s done for the communities as it relates to public transit,” Fyten said. “I just consider myself fortunate for him to have been my mentor throughout my career.”

The Chaska City Council, on a 5-0 vote, approved a major step forward for the Chaska Community Center master plan Dec. 6, signaling an architect search for a potential expansion and significant upgrades to the center.

The project, which would set a future vision and reinvestment, would kick-off by late February 2022.

The 30-year-old 210,000-square foot building is one of the largest community centers in the country. The community center currently boasts a fitness center, indoor pool with water slides, a track, an outdoor splash pad, a two-sheet ice arena, an indoor playground with member drop-in childcare and a theater. There is also an art gallery, center for older adults, gift shop and several leased spaces.

“That facility has really served the community tremendously over those 30 years as really the prime gathering place here in Chaska. But the fact is, it is 30 years old,” said Parks and Recreation Director Marshall Grange, at the meeting. “We are starting to see major facility components fail.”

Developing a plan would let city staff be more proactive with upgrades.

Grange said the master plan could include a teen center, pickleball area or e-sports, reflecting changes in recreation trends over the decades. Different parking or an altered campus layout are also on the table.

“Things like fitness and working out (are) much more popular now,” he said. “But it really wasn’t at the forefront of the design of the facility when it was first built.”

Knowing what to incorporate into the potential new space takes input, according to Grange and city councilors.

A consultation group made of a citizen task force, city and school staff and community center members will meet several times to voice wishes or concerns.

People can apply to be on the task force through the city by Jan. 30.

The city will also send out a community-wide survey, hold open houses and work sessions, and likely create an informative project website.

Doing all these projects in one saves money, Councilor Mike Huang said, and offers a larger return on investment.

“This one I’m pretty excited about because it’s really kicking off something that we’ve been working to move towards over the last year,” said City Administrator Matt Podhradsky at the meeting.

“It’ll be interesting to see how we can utilize a space that’s pretty full,” Windschitl said. “I think that this will be an interesting re-invest back into the community to see what plays out and what comes out of the master plan.”