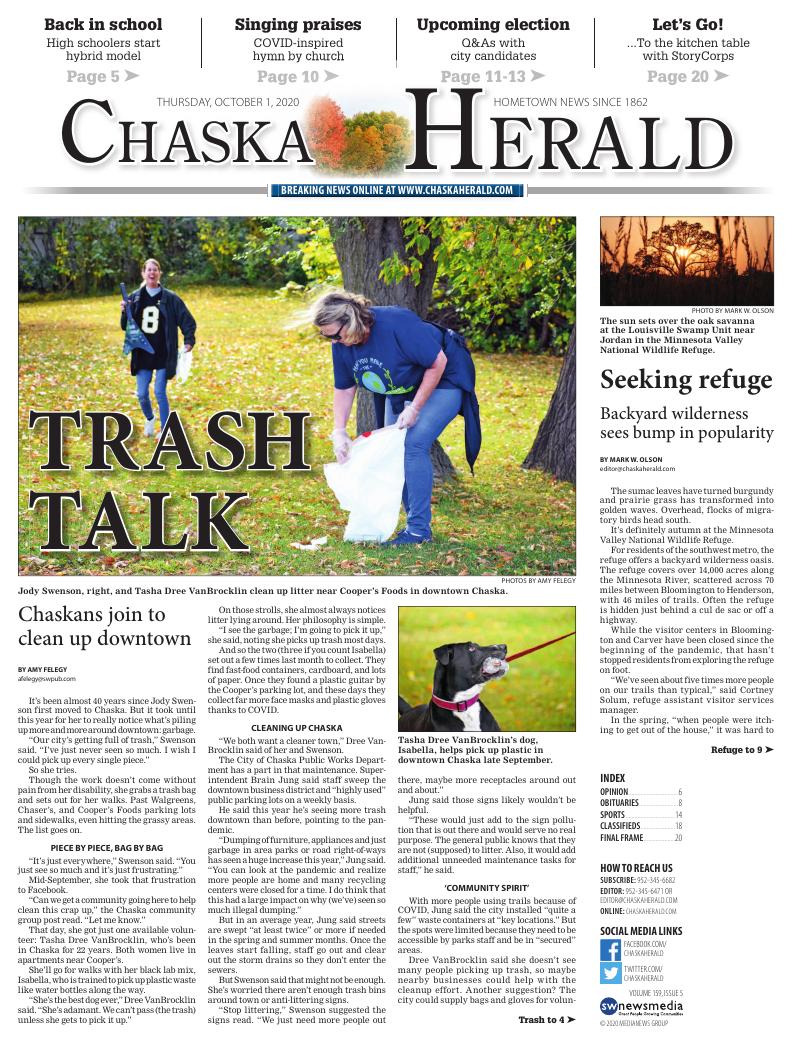 Jody Swenson fills a bag of garbage after walking around one block in downtown Chaska.

It’s been almost 40 years since Jody Swenson first moved to Chaska. But it took until this year for her to really notice what’s piling up more and more around downtown: garbage.

“Our city’s getting full of trash,” Swenson said. “I’ve just never seen so much. I wish I could pick up every single piece.”

Though the work doesn’t come without pain from her disability, she grabs a trash bag and sets out for her walks. Past Walgreens, Chaser’s, and Cooper’s Foods parking lots and sidewalks, even hitting the grassy areas. The list goes on.

PIECE BY PIECE, BAG BY BAG

“Can we get a community going here to help clean this crap up,” the Chaska community group post read. “Let me know.”

That day, she got just one available volunteer: Tasha Dree VanBrocklin, who’s been in Chaska for 22 years. Both women live in apartments near Cooper’s.

She’ll go for walks with her black lab mix, Isabella, who is trained to pick up plastic waste like water bottles along the way.

“She’s the best dog ever,” Dree VanBrocklin said. “She’s adamant. We can’t pass (the trash) unless she gets to pick it up.”

On those strolls, she almost always notices litter lying around. Her philosophy is simple.

“I see the garbage; I’m going to pick it up,” she said, noting she picks up trash most days.

And so the two (three if you count Isabella) set out a few times last month to collect. They find fast-food containers, cardboard, and lots of paper. Once they found a plastic guitar by the Cooper’s parking lot, and these days they collect far more face masks and plastic gloves thanks to COVID.

“We both want a cleaner town,” Dree VanBrocklin said of her and Swenson.

The City of Chaska Public Works Department has a part in that maintenance. Superintendent Brain Jung said staff sweep the downtown business district and “highly used” public parking lots on a weekly basis.

He said this year he’s seeing more trash downtown than before, pointing to the pandemic.

“Dumping of furniture, appliances and just garbage in area parks or road right-of-ways has seen a huge increase this year,” Jung said. “You can look at the pandemic and realize more people are home and many recycling centers were closed for a time. I do think that this had a large impact on why (we’ve) seen so much illegal dumping.”

But in an average year, Jung said streets are swept “at least twice” or more if needed in the spring and summer months. Once the leaves start falling, staff go out and clear out the storm drains so they don’t enter the sewers.

But Swenson said that might not be enough. She’s worried there aren’t enough trash bins around town or anti-littering signs.

“Stop littering,” Swenson suggested the signs read. “We just need more people out there, maybe more receptacles around out and about.”

“These would just add to the sign pollution that is out there and would serve no real purpose. The general public knows that they are not (supposed) to litter. Also, it would add additional unneeded maintenance tasks for staff,” he said.

With more people using trails because of COVID, Jung said the city installed “quite a few” waste containers at “key locations.” But the spots were limited because they need to be accessible by parks staff and be in “secured” areas.

Dree VanBrocklin said she doesn’t see many people picking up trash, so maybe nearby businesses could help with the cleanup effort. Another suggestion? The city could supply bags and gloves for volunteers to use, she said.

The bodies of water around downtown — both Clayhole Lake and the Brickyard Clayhole behind Cooper’s — seem to be prime targets for garbage collection.

Working with her boyfriend at a swimming pool company, Dree VanBrocklin has gone out to the lake with pool poles and nets, collecting what they could.

“We scooped out so much garbage,” she said.

Swenson said she’s talked to the city “many times” about trash pickup. She walks the boardwalk at Firemen’s Park often and constantly sees garbage in the lake, where she said not enough cans exist.

Both Swenson and Dree VanBrocklin said when crews clean up the lakes, there’s no shortage of trash.

“They hauled out so much stuff. It was unbelievable,” Swenson said.

She said the biggest help would just be more hands on deck. It’s why she and Dree VanBrocklin organized a community cleanup event on Saturday.

People seem to be receptive to the idea, at least on Facebook thus far.

“Awesome,” Chaska Mayor Mark Windschitl commented on the post. “Thank you (for) that community spirit.”

So Chaskans will come together, gearing up with gloves and bags. Whether by grabbing a plastic bottle or pizza box, it’s the little things that might help make Chaska a cleaner place to live.

The sun sets over the oak savanna at the Louisville Swamp Unit near Jordan in the Minnesota Valley National Wildlife Refuge.

A short hike is rewarded with a beautiful overlook at the Louisville Swamp Unit of the Minnesota Valley National Wildlife Refuge.

For residents of the southwest metro, the refuge offers a backyard wilderness oasis. The refuge covers over 14,000 acres along the Minnesota River, scattered across 70 miles between Bloomington to Henderson, with 46 miles of trails. Often the refuge is hidden just behind a cul de sac or off a highway.

While the visitor centers in Bloomington and Carver have been closed since the beginning of the pandemic, that hasn’t stopped residents from exploring the refuge on foot.

In the spring, “when people were itching to get out of the house,” it was hard to find a parking spot at some of the refuge sites, Solum said. Now, it’s cooled down, but the refuge remains popular nonetheless.

With more people working at home, people are discovering the refuge. “It’s free. That’s the other thing. It’s free to anyone. It’s open 365 days a year, sunrise to sunset,” Blood said.

The recently completed Cedar Avenue Bridge project in Bloomington has become a much-visited spot in the refuge.

“It’s really easy access — parking is nearby. It’s a popular spot for birders and photographers, because you can get right over the water and see wildlife,” Blood said.

There are about a dozen units in the refuge, each with various personalities and habitats, such as floodplain forests, wetlands, tallgrass prairies and oak savannas.

In the southwest metro, the Rapids Lake Education Center near Carver and the Louisville Swamp Unit near Shakopee are popular sites, boasting beautiful vistas and oak savannas.

Autumn is a particularly beautiful time to visit.

“Migration of birds, the changing of the leaves. I like to say it’s a season for the senses,” Blood said.

“There’s a lot of different things happening as the seasons change. You can see a lot of wildlife foraging around and you can see the flowers and trees start to change as the weather cools and days shorten,” said Solum, who also reminds hikers to be aware of hunters during hunting season, and wear orange or bright pink to make themselves more visible.

Nicole Menard, urban biologist with the refuge, notes that visitors can spot bright yellow Maximilian sunflowers or the lavender-colored asters. One of Menard’s favorites is the spotted touch-me-not.

She also reminds visitors to keep an eye out for birds during their migration.

“I’m seeing a lot of species I wouldn’t normally see coming through,” she said.

“This is a great time for folks to get their nature fix,” Menard said. Blood agrees.

“The crunch of the leaves underfoot. You can smell the changing of the seasons, and it’s getting colder,” Blood said. “I love sweater weather. Bring that mug of hot chocolate with you and make a day of it. It’s a wonderful place to be.”

Here are a few places to visit in the Minnesota River National Wildlife Refuge. Find many more at www.fws.gov/refuge/Minnesota_Valley.

The nonprofit group acts as the “voice of the refuge.”

Park at the Louisville Swamp Unit parking lot and take a 1-1/4 mile hike along the Mazomani Trail along an oak savanna to a scenic overlook offering a commanding view of the Minnesota River Valley.

“They’re seeking refuge in a refuge." 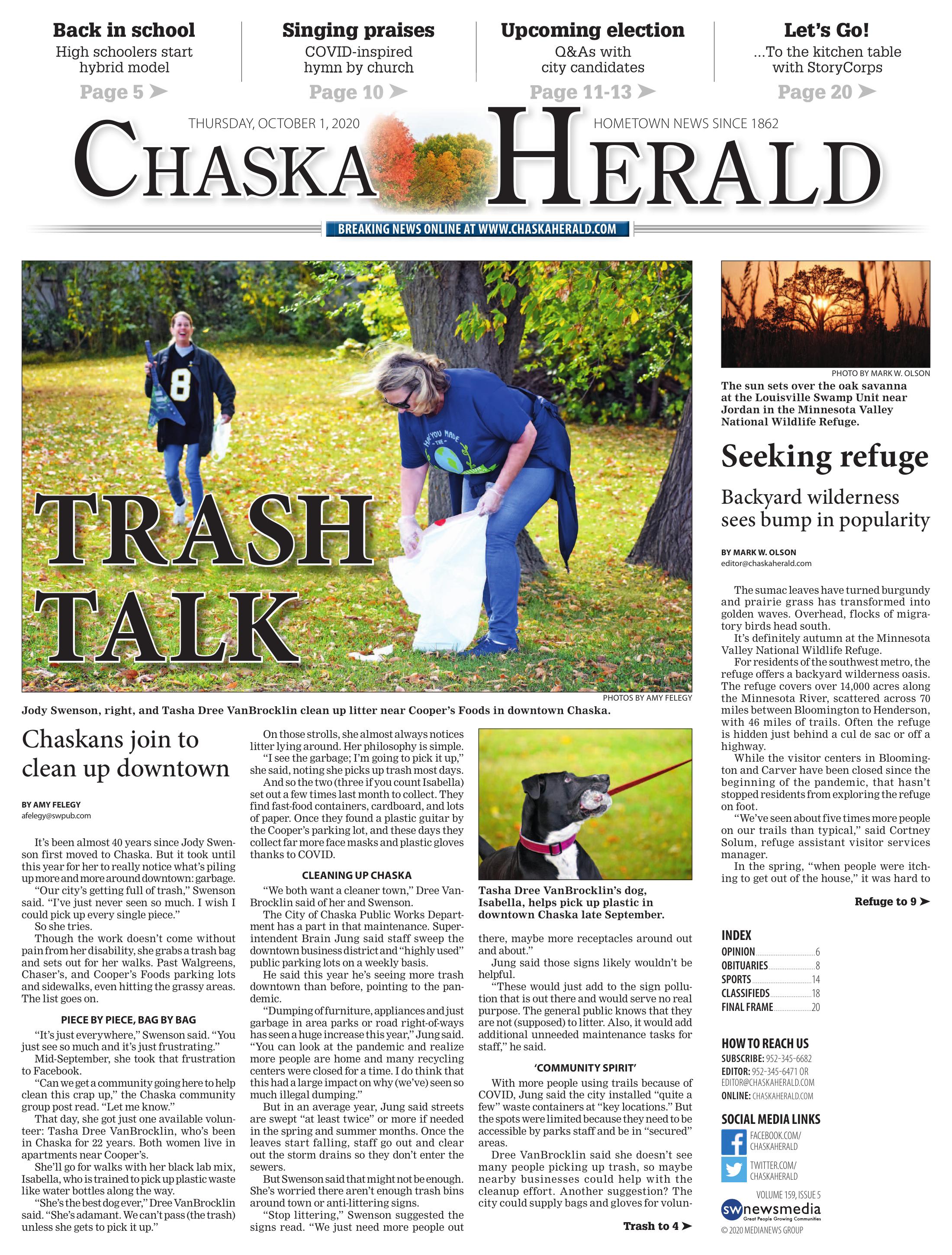