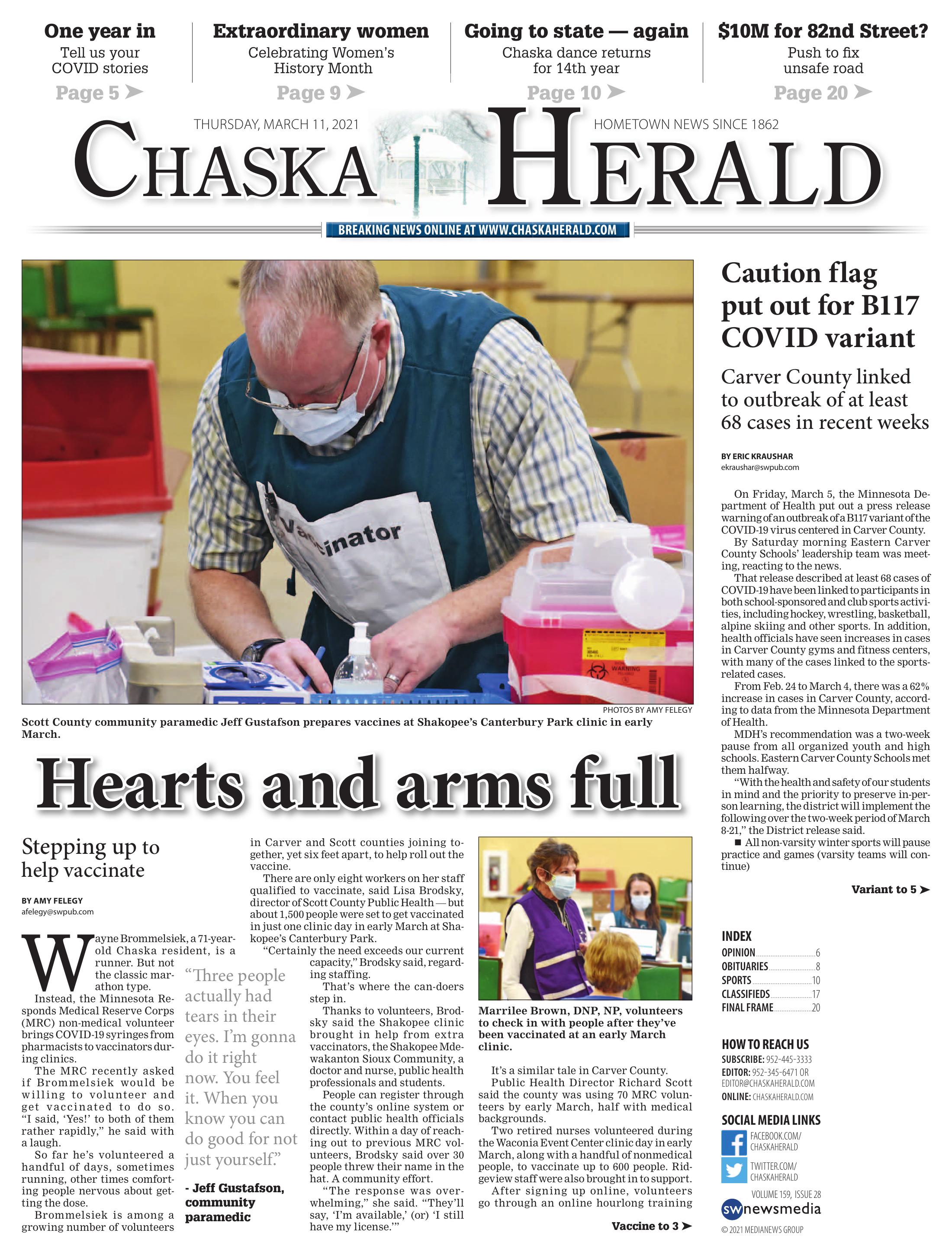 Marrilee Brown, DNP, NP, volunteers to check in with people after they’ve been vaccinated at an early March clinic.

Jeff Gustafson prepares to vaccinate someone outside at Shakopee’s Canterbury Park. The service is offered to those with lowered mobility or who need to stay inside their vehicles.

amy.felegy / A volunteer checks people in outside a Scott County vaccination clinic.

A volunteer checks people in outside a Scott County vaccination clinic.

Wayne Brommelsiek, a 71-year-old Chaska resident, is a runner. But it’s not the classic marathon type.

The MRC recently asked if Brommelsiek would be willing to volunteer and get vaccinated to do so.

"I said, 'Yes!' to both of them rather rapidly," he said with a laugh.

So far he’s volunteered a handful of days, sometimes running, other times comforting people nervous about getting the dose.

Brommelsiek is among a growing number of volunteers in Carver and Scott counties joining together, yet six feet apart, to help roll out the vaccine.

There are only eight workers on her staff qualified to vaccinate, said Lisa Brodsky, director of Scott County Public Health — but about 1,500 people were set to get vaccinated in just one clinic day in early March at Shakopee’s Canterbury Park.

That’s where the can-doers step in.

Thanks to volunteers, Brodsky said the Shakopee clinic brought in help from extra vaccinators, the Shakopee Mdewakanton Sioux Community, a doctor and nurse, public health professionals and students.

People can register through the county’s online system or contact public health officials directly. Within a day of reaching out to previous MRC volunteers, Brodsky said over 30 people threw their name in the hat. A community effort.

Two retired nurses volunteered during the Waconia Event Center clinic day in early March, along with a handful of nonmedical people, to vaccinate up to 600 people. Ridgeview staff were also brought in to support.

“Three people actually had tears in their eyes. I’m gonna do it right now. You feel it. When you know you can do good for not just yourself.”

After signing up online, volunteers go through an online hourlong training through the Minnesota Department of Health. That puts them on a list to be contacted when needed for in-person or traveling clinics.

Deb Larsen is a non-medical volunteer with Carver County’s MRC. The just-retired 65-year-old and spends her donated time greeting people at the vaccine clinic.

“I think a lot of people coming in, they’re carrying (a lot) on their shoulders of all this, this whole year, and they just have a great deal of hope on what this vaccine might mean for them and moving forward,” Larsen said.

She’s been helping at the Medical Reserve for years, but this is her first volunteer gig since wrapping up work last November. Her typical MRC work is teaching people what to do in emergency health situations. It’s helped prepare her for the pandemic.

Larsen ushers people to the right spot when they arrive, easing any concerns and making connections. She even learns people’s names for the brief time they’ll be at the clinic.

To her, it’s all about the people.

She wants her older relatives to get vaccinated, but rollouts vary state by state. Still, helping others get the shot gives her some peace of mind.

“They all live in different places in the country but I feel like I have an opportunity to help them,” Larsen said. “This is a way that helps me to be closer to doing that for family or even for friends.”

Merrilee Brown was getting her own COVID shot and was asked if she could help in the near future through a Scott County volunteer program. She said yes.

In an observer role at Canterbury Park’s clinic, she looked after people after they’ve been vaccinated.

“It’s a wonderful feeling. Having a background in public health, you just want everyone that wants to be vaccinated to get vaccinated and you want the experience to be as helpful as possible,” she said.

That day at Canterbury Park, Brown said there were maybe half a dozen people who “felt a little shaky” after getting vaccines, which she said could be caused by nervousness or relief.

She’s been a nurse for almost 50 years with a DNP in nursing, so being around needles isn’t new to her. What is new? COVID — and how impactful protection from it can be.

“There are people that are crying after they’ve gotten their first vaccination. That is just such a relief for people,” Brown said.

All people, including the ones doling out the syringes.

“Three people actually had tears in their eyes. I’m gonna do it right now,” community paramedic Jeff Gustafson said. “You feel it. When you know you can do good for not just yourself.”

Gustafson has worked at a handful of vaccine clinics for free after getting a sign-off from a medical director, as well bringing doses to care facilities or homes. That day in Canterbury Park, he saw elation while giving vaccines directly to people.

Even if vaccine day doesn’t coincide with a birthday, volunteers say it’s still worth celebrating since a COVID vaccine — or two — is quite the prize.

On Friday, March 5, the Minnesota Department of Health put out a press release warning of an outbreak of a B117 variant of the COVID-19 virus centered in Carver County.

That release described at least 68 cases of COVID-19 have been linked to participants in both school-sponsored and club sports activities, including hockey, wrestling, basketball, alpine skiing and other sports. In addition, health officials have seen increases in cases in Carver County gyms and fitness centers, with many of the cases linked to the sports-related cases.

From Feb. 24 to March 4, there was a 62% increase in cases in Carver County, according to data from the Minnesota Department of Health.

MDH's recommendation was a two-week pause from all organized youth and high schools. Eastern Carver County Schools met them halfway.

"With the health and safety of our students in mind and the priority to preserve in-person learning, the district will implement the following over the two-week period of March 8-21," the District release said.

The news brought relief to some Chaska and Chanhassen high school athletes including a state-qualifying Hawks Dance Team. Some athletes wondered, like with football and volleyball in November, if an abrupt end was coming to their winter sports.

"This is why we do exhaustive contact tracing. For situations such as this. We're really lucky to have a great school nurse team that has become really pros on this," Celi Haga, director of communications for ECCS, said on Tuesday. "What people need to know is why we pivoted in November, and that was because of staffing challenges. We couldn't staff our buildings. We hope as staff continue to receive vaccinations that the impact of quarantines will lessen. It's really a race against time."

Haga said Carver County has been "wonderful" to work with in partnering to make sure school staff receive vaccines in a timely manner. Many have received at least the first dose with a second in the coming weeks.

"We hope as our staff get vaccinated, we're able keep our learning models intact, and we're able to keep them safe in our schools," Haga said.

Haga said superintendent Lisa Sayles-Adams looks at the data thoroughly every day. If a school reaches five percent in quarantine, a pivot in learning model will occur for that building.

"MDH’s press release calls for a two-week pause for all Carver County school and youth sports starting Monday, March 8, and also includes additional measures, including keeping secondary students in a hybrid model. Our district leadership has been working over the weekend to go through these recommendations and determine next steps, the schools' release said.

Haga said any change in plans for the March 22 date of a return to four days a week in-person learning for grades 6-12 will be announced in coming days.

District 112 encourages families and students to be tested, with new opportunities March 11-13 and 18-20 at a pop-up site at Chan Rec Center.

The Victoria school cancelled boys basketball contests for March 5 and March 8. A boys hockey game was also called off for March 6.

The school, in a release to families, said varsity practices and contests wouldn't begin until Tuesday, March 9. All JV and lower levels are suspended for the final week of the regular season.

All Fire athletes must get tested for COVID by Sunday, March 7. Varsity activities "may be paused if the circumstances and resulting data require," the school's release said.

Waconia, which has spring break this week, will only have teams cleared of COVID available to play.

“We all need to keep working together to combat this pandemic, and we support the health department’s recommendations,” said Dr. Richard Scott, Carver County director of public health. “We will continue supporting our schools and businesses in following this new guidance to protect everyone in our communities.”

Word trickled down Tuesday, March 2, that the final six games of the Chaska girls basketball season were cancelled due to COVID concerns.

No match-up with No. 1-ranked Hopkins, no games for the unbeaten Hawks until the post-season.

Chaska isn't the only team locally to deal with a pause. Chanhassen boys basketball will lose a total of six games after not playing between Feb. 23 and March 11. The Storm will play Edina and Minnetonka on March 12 and 13.