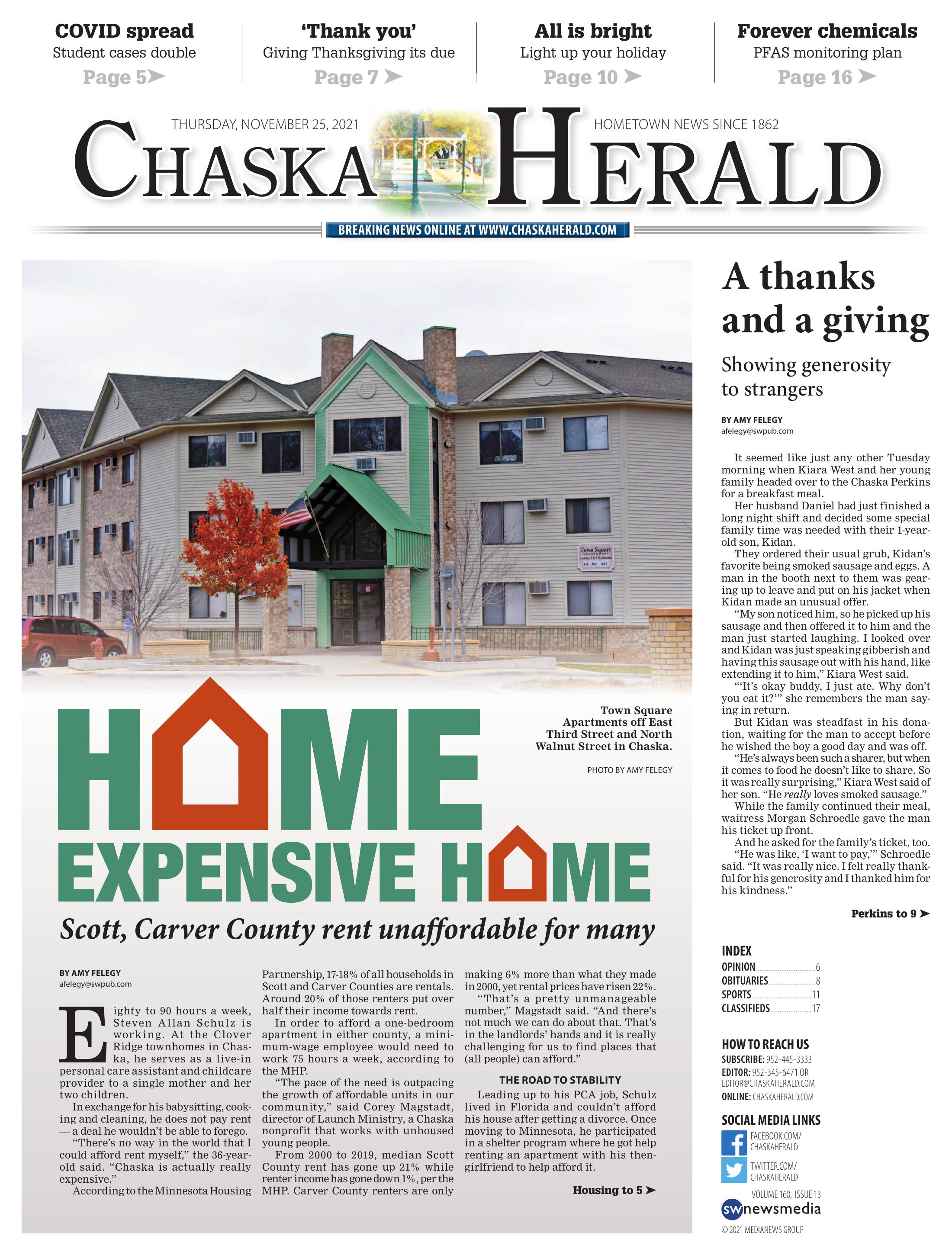 Eighty to 90 hours a week, Steven Allan Schulz is working. At the Clover Ridge townhomes in Chaska, he serves as a live-in personal care assistant and childcare provider to a single mother and her two children.

In exchange for his babysitting, cooking and cleaning, he does not pay rent — a deal he wouldn’t be able to forego.

“There’s no way in the world that I could afford rent myself,” the 36-year-old said. “Chaska is actually really expensive.”

According to the Minnesota Housing Partnership, 17-18% of all households in Scott and Carver Counties are rentals. Around 20% of those renters put over half their income towards rent.

In order to afford a one-bedroom apartment in either county, a minimum-wage employee would need to work 75 hours a week, according to the MHP.

“The pace of the need is outpacing the growth of affordable units in our community,” said Corey Magstadt, director of Launch Ministry, a Chaska nonprofit that works with unhoused young people.

“That’s a pretty unmanageable number,” Magstadt said. “And there’s not much we can do about that. That’s in the landlords’ hands and it is really challenging for us to find places that (all people) can afford.”

THE ROAD TO STABILITY

Leading up to his PCA job, Schulz lived in Florida and couldn’t afford his house after getting a divorce. Once moving to Minnesota, he participated in a shelter program where he got help renting an apartment with his then-girlfriend to help afford it.

“Eventually, I was asked to get out of there and I never really got established again,” he said. “There have definitely been a few bumps in the road as far as getting and keeping housing.”

Even at his Clover Ridge place, Schulz says it’s hard for him to feel like he has housing stability.

He claims that management is making “a big deal about me even receiving mail here because I’m not on the lease.”

Schulz says the only other place he can receive mail is at his mother’s house in Saint Peter, a tough distance for someone without a car.

IT’S NOT AS EASY AS SAYING, ‘JUST GET A JOB’

Magstadt knows personally what it’s like to have someone stay at your home, though he hasn’t run into the same issues as Schulz. He encourages people to find a way to do the same.

“There are an awful lot of people that have space in their homes. Do you have a basement that you could find somebody that could rent there affordability or stay there for a little while to get on their feet?” he said. “For a lot of people, what they really need is time. Time to save, time to build up a little bit of equity so they can get into some place they can afford.”

Magstadt recently worked with a young man who worked a decent full-time job. But he had to stay in Launch Ministry’s emergency hotel shelter for half a year to save up enough money to afford an apartment.

“I just feel like that’s wrong. Somebody who is working, has transportation, is doing all the things that we tell them they should do, and yet it still takes that long to find a place they can be able to afford,” Magstadt said.

Though people may commonly suggest owning is cheaper than renting, that’s not the case at first, he said. In order to own a house, you need to have a somewhat lengthy credit history, work history and successful rent history, not to mention a down payment.

“It’s not something you can get overnight,” Magstadt said. “Even looking at home prices in our community ... that becomes a barrier in itself.”

“Not every job pays what you need to afford rent. And we need healthcare workers, we need retail people like cashiers. They’re working in our communities already. What their salary is just doesn’t afford them. It’s not as easy as saying, ‘Just get a job’ when the rents are too high,” said Director Allison Streich with the Carver County Community Development Agency.

“Part of it is there’s just not enough units to serve the people that need them,” she said.

The CDA is in the process of adding at least nine more new construction units and rehabbing another property. It’s also working on funding new senior and multi-family units, she said.

“I think local communities set priorities and set values,” he said. “What would it look like for us to develop a community that has passion for people in need and put our money where our mouths are?”

Daniel and Kiara West with their son, Kidan.

It seemed like just any other Tuesday morning when Kiara West and her young family headed over to the Chaska Perkins for a breakfast meal.

Her husband Daniel had just finished a long night shift and decided some special family time was needed with their 1-year-old son, Kidan.

They ordered their usual grub, Kidan’s favorite being smoked sausage and eggs. A man in the booth next to them was gearing up to leave and put on his jacket when Kidan made an unusual offer.

“My son noticed him, so he picked up his sausage and then offered it to him and the man just started laughing. I looked over and Kidan was just speaking gibberish and having this sausage out with his hand, like extending it to him,” Kiara West said.

“‘It’s okay buddy, I just ate. Why don’t you eat it?’” she remembers the man saying in return.

But Kidan was steadfast in his donation, waiting for the man to accept before he wished the boy a good day and was off.

“He’s always been such a sharer, but when it comes to food he doesn’t like to share. So it was really surprising,” Kiara West said of her son. “He really loves smoked sausage.”

While the family continued their meal, waitress Morgan Schroedle gave the man his ticket up front.

And he asked for the family’s ticket, too.

“He was like, ‘I want to pay,’” Schroedle said. “It was really nice. I felt really thankful for his generosity and I thanked him for his kindness.”

When Schroedle brought the news back to the family’s table, Kiara West nearly cried.

“It just made us really happy because we have been struggling with food, but we really wanted to do it for ourselves. The fact this man did it for us and he didn’t know our situation really helped us out,” Kiara West said. “My husband is like, ‘Do you think he’s still here?’ and was trying to run out to the parking lot.”

Each little bit of money saved gets the family closer to buying their own home, she said. Daniel’s employer recently said he could no longer work overtime, which was helpful additional income the family won’t see for the time being.

“We’re young parents, and both me and my husband have come from always struggling so we wanted to change that for our son. So we’ve been doing our best to save as much money so we can give him the best things,” West said.

She’s been living in Chaska since she was 4 years old and says she doesn’t always see such warmth from folks around town.

“I’ve encountered, sadly, a lot of racism. Me and my husband are an interracial couple and I have a mixed baby, half Mexican and half white. So it was really nice to see someone appreciate our family,” West said, tearing up. “I want to say thank you to him for just seeing us as a loving family who you wanted to do something kind for us, and we appreciate it.”

Schroedle has been working at Perkins since August and hadn’t served the man before, nor had she seen someone pay for another’s meal. But it was only a matter of days before another gentleman offered to pick up the bill for a few tables.

“I love to see people loving others,” she said.

While Kidan’s smoked sausage may not sound like a classic Thanksgiving, mashed-potato-turkey-leg meal, it was one full of thanks and full of giving.

“I want to say thank you to him for just seeing us as a loving family who you wanted to do something kind for us, and we appreciate it.”