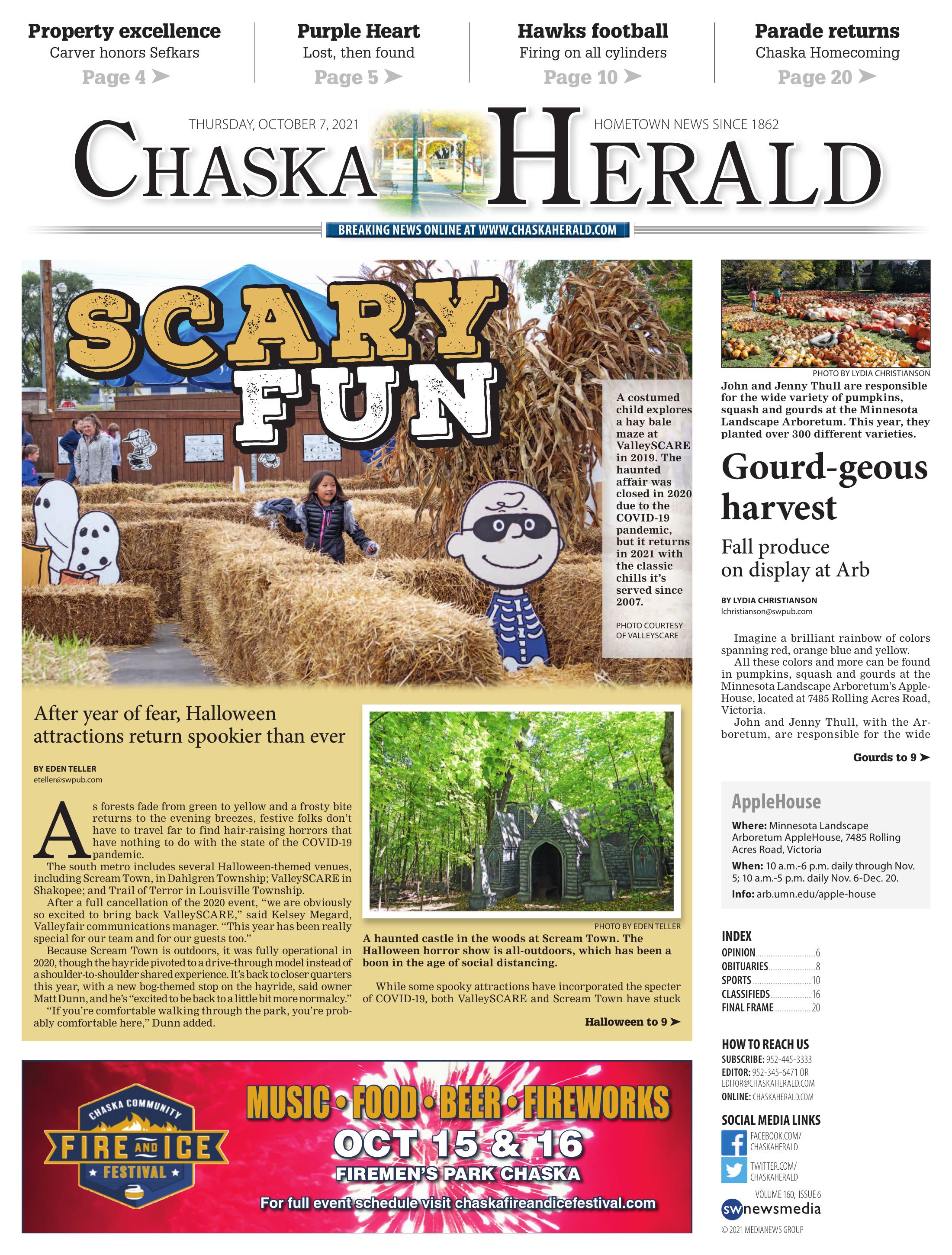 Entertainment
After a year of fear, Halloween attractions return spookier than ever
Photo courtesy of ValleySCARE

A costumed child explores a hay bale maze at ValleySCARE in 2019. The haunted affair was closed in 2020 due to the COVID-19 pandemic, but it’s back in 2021 with the classic chills it’s served since 2007.

A sign warns groups to keep a healthy distance from others at Scream Town.

A haunted castle in the woods at Scream Town. The Halloween horror show is all-outdoors, which has been a boon in the age of social distancing.

As forests fade from green to yellow and a frosty bite returns to the evening breezes, festive folks don’t have to travel far to find hair-raising horrors that have nothing to do with the state of the COVID-19 pandemic.

The south metro includes several Halloween-themed venues, including Scream Town, in Dahlgren Township; ValleySCARE in Shakopee; and Trail of Terror in Louisville Township.

After a full cancellation of the 2020 event, “we are obviously so excited to bring back ValleySCARE,” said Kelsey Megard, Valleyfair communications manager. “This year has been really special for our team and for our guests too.”

Because Scream Town is outdoors, it was fully operational in 2020, though the hayride pivoted to a drive-through model instead of a shoulder-to-shoulder shared experience. It’s back to closer quarters this year, with a new bog-themed stop on the hayride, said owner Matt Dunn, and he’s “excited to be back to a little bit more normalcy.”

While some spooky attractions have incorporated the specter of COVID-19, both ValleySCARE and Scream Town have stuck with the traditional boogeymen like vampires, ghouls and ghosts.

“I don’t know if people are quite ready to laugh about it yet,” Dunn said of the pandemic.

The biggest change to ValleySCARE is the continued requirement for guests to reserve a time to visit, rather than just buying an all-day pass. That rule has applied to all visitors to ValleyFair since the onset of the COVID-19 pandemic. It’s made an impact on the park experience, though that’s not a bad thing, Megard noted.

“It’s definitely changed the dynamic a little bit. Since we opened in 1976, you’ve been able to show up at any time of day,” she said. “It really allows us to manage queue lines... (and) overall it’s made it a better experience.”

Valleyfair has also installed “hundreds” of hand sanitizing stations, Megard said, and while masks aren’t required for outdoor spaces, the park asks unvaccinated visitors to wear masks while indoors at dining areas and the indoor mazes.

NO SHORTAGE OF GHOULS

“We had a little bit of a bump in hiring, a slowdown” when he first started hiring this summer, Dunn said, “and then out of nowhere we saw a pickup in applications.”

Megard is deeply aware of other industries’ hiring shortages. She attributed ValleySCARE’s luck to its slew of actors that are as consistent as the scares of the park itself: As the park readies for its 14th season, some of the people who will be providing scares have worked all 14 autumns.

“We are actually very lucky, we have a faithful crew that comes back to ValleySCARE year after year,” Megard said. “They just love being a part of this event so much.”

Dunn’s staff are also a loyal bunch, with an enthusiasm for their roles that Dunn speculates comes from the freedom to “develop their own characters and their own scares.” He watches the creative process unfold in the group chat that the actors have.

“It’s fun to see the actors talking amongst themselves online,” he said. “It’s not a Halloween show, it’s a production.”

Daisy gourds are just one unique item you can find at the Minnesota Landscape Arboretum’s AppleHouse.

John Thull enjoys educating people about the diversity of pumpkins and gourds that exist all around the world. One of his and his wife Jenny’s favorites is the Speckled Hound squash.

All these colors and more can be found in pumpkins, squash and gourds at the Minnesota Landscape Arboretum’s AppleHouse, located at 7485 Rolling Acres Road, Victoria.

John and Jenny Thull, with the Arboretum, are responsible for the wide variety of pumpkins, squash and gourds. This year they planted over 300 different varieties, John said, adding at the time of this interview they weren’t sure yet if all 300 kinds took.

Visitors of the AppleHouse are in luck. Several of the pumpkins and squash grown by the Thulls make delicious additions to a hearty fall meal.

Most fall food lovers are familiar with the classics, such as spaghetti and butternut squash. But what do the growers themselves enjoy eating? The Thulls like the Australian Butter squash and Marina Di Chioggia, a bumpy blue pumpkin that is a great for making gnocchi.

Another of the Thull’s favorites is the Speckled Hound squash. Both as a grower and as a consumer. It sets a lot of nice fruit and has a great flavor and perfectly moist texture, John said.

The harvest will be available in the AppleHouse as long as the store is open, which is typically through the end of November and sometimes into early December. Apples and grapes will also be for sale while supplies last.

The people responsible for naming the varieties were surely creative. Names include the grizzly bear pumpkin, peanut pumpkin, fireball pumpkin and gremlin gourd. A few daisy gourds arranged in a vase would be a unique and beautiful substitute for a bouquet of flowers.

The Thulls enjoy educating people about the huge diverse groups of pumpkins and squash that exist in different parts of the world. At the Arb, the Thulls have pumpkins and squash from all the places where they are able to grow, such as Australia, Asia, Europe, Africa and South America.

“There’s so much variety within the pumpkins and squash that most people don’t even realize it. People maybe have seen like white pumpkins and think ‘that’s exotic.’ But as you can see here there’s a whole rainbow of colors,” John said.

15 oz. of Speckled Hound squash puree (or any pumpkin puree)

Add butter and shortening and process until homogenous dough just starts to collect in uneven clumps, about 10 seconds (dough will resemble cottage cheese curds with some very small pieces of butter remaining.)

Scrape bowl with rubber spatula and redistribute dough evenly around processor blade. Add remaining ½ cup flour and pulse until mixture is evenly distributed around bowl and mass of dough has been broken up.

Sprinkle vodka and water over mixture. With rubber spatula, use folding motion to mix, pressing down on dough until it is slightly tacky an sticks together. Flatten dough into 4-inch disk. Wrap in plastic and refrigerate for at least 45 minutes or up to two days.

Remove dough from refrigerator and roll out on generously floured work surface to 12-inch circle about 1/8 inch thick. Roll dough loosely around rolling pin and unroll into pie plate, leaving at least 1-inch overhang on each side.

Working around circumference, ease dough into plate by gently lifting edge of dough with one hand while pressing into plate bottom with other hand. Refrigerate for 15 minutes.

Trim overhang to ½ inch beyond lip of pie plate. Fold overhang under itself, folded edge should be flush with edge of pie plate. Using thumb and fore finger, flute edge of dough. Refrigerate dough-line plate until firm, about 15 minutes.

Remove pie pan from refrigerator, line crust with foil and fill with pie weights. Bake on rimmed backing sheet for 15 minutes. Remove foil and weights and rotate play and bake five to 10 additional minutes until crust is golden brown and crisp. Remove pie plate and baking sheet from oven.

While pie shell is baking, whisk cream, milk, eggs, yolk and vanilla together in a medium bowl.

Continue to simmer mixture, stirring constantly and mashing against sides of pot, until thick and shiny for 10 to 15 minutes.

Remove pan from heat and whisk in cream mixture until fully incorporated. Strain mixture through a fine-mesh strainer set over a medium bowl, using a spatula to press solids through strainer.

Return pie plate with baking sheet to oven and bake pie for 10 minutes.

Reduce heat to 300 degrees and continue baking until edges of pie are set, 20 to 35 minutes longer. Transfer pie to wire rack and cool to room temperature, two to three hours. Cut into wedges and serve.