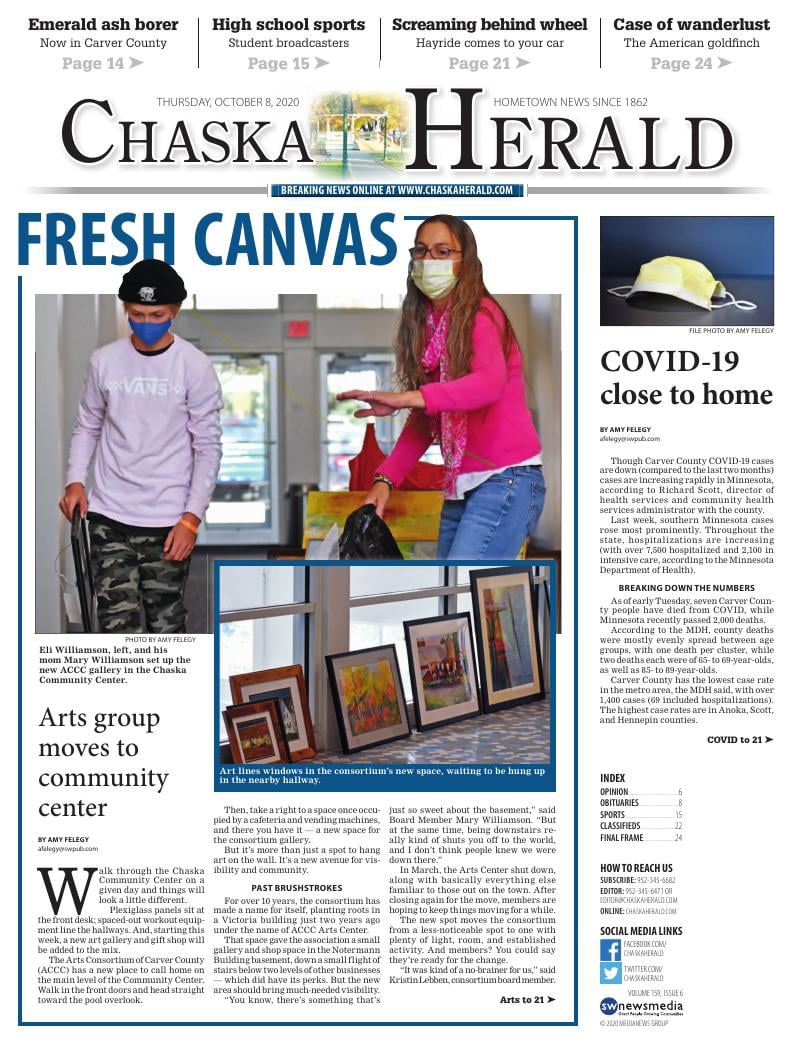 Hayride comes to your car

Eli Williamson, left, and his mom Mary Williamson set up an ACCC gallery in the Chaska Community Center.

Art lines windows at the Chaska Community Center, waiting to be hung up in the nearby hallway.

Walk through the Chaska Community Center on a given day and things will look a little different.

Plexiglass panels sit at the front desk; spaced-out workout equipment line the hallways. And, starting this week, a new art gallery and gift shop will be added to the mix at least for the time being.

The Arts Consortium of Carver County (ACCC) might have a new place to call home on the main level of the Community Center, pending finalization from Chaska's Parks & Recreation and City Council.

Walk in the front doors and head straight toward the pool overlook. Then, take a right to a space once occupied by a cafeteria and vending machines, and there you have it — a new space for the consortium gallery.

But it’s more than just a spot to hang art on the wall. If set to be a permanent location, it could be a new avenue for visibility and community.

Chaska Parks & Recreation Director Marshall Grange said the department is exploring the idea of a more formal partnership with ACCC. As of now, the permanence of that space is under debate but says its "likely."

"We see it as a very valuable partnership," Grange said, adding the space could bring value to other parts of the center too.

For over 10 years, the consortium has made a name for itself, planting roots in a Victoria building just two years ago under the name of ACCC Arts Center.

That space gave the association a small gallery and shop space in the Notermann Building basement, down a small flight of stairs below two levels of other businesses — which did have its perks. But the new area should bring much-needed visibility.

“You know, there’s something that’s just so sweet about the basement,” said Board Member Mary Williamson. “But at the same time, being downstairs really kind of shuts you off to the world, and I don’t think people knew we were down there.”

In March, the Arts Center shut down, along with basically everything else familiar to those out on the town. After closing again for the move, members are hoping to keep things moving for a while.

The new spot would move the consortium from a less-noticeable spot to one with plenty of light, room, and established activity. And members? You could say they’re ready for the change.

“It was kind of a no-brainer for us,” said Kristin Lebben, consortium board member.

The new consortium area, which ACCC is renting from the community center but is expecting a permanent move, spans several areas: The sunroom space at the back of the building, currently used for workout equipment; the gallery hallway, located outside of the theater; and the old cafeteria, now converted into shop space.

Grange said rent has yet to be set, but the space offers a home for the consortium as they figure out their next step.

COVID and small spaces are a perfect storm. Luckily, the new gallery will give members and guests more room to socially distance themselves.

Along with waving goodbye to the low profile, the new space should offer much more than that.

ACCC President Cynthia Anderson thanked the Community Center and city of Chaska for letting the association bring as much art as they can to the area.

“We are very excited,” Anderson said. “The city of Chaska has graciously opened up their facility to bring the arts in even more than they’ve got right now.”

Bringing in the arts can also bring in camaraderie.

“We have a lot of shared goals for the community,” Lebben. “This really helps them offer more things to the community as well as the spaces that they have now will be utilized more with us there.”

Grange said no major construction would likely come to the space, other than a bit of painting. Someday he'd like to see a glass wall put up to give the gift shop more of a permanent feel.

All in all, perhaps to simplest statements wrap it up best. Board Member Linda Jo Stuckey offered a simple summary.

“It’s such a fabulous location.”

This article has been updated from its print version, "Fresh canvas: Arts group moves to community center," to clarify the consortium's new space has not yet been finalized.

Though Carver County COVID-19 cases are down (compared to the last two months) cases are increasing rapidly in Minnesota, according to Richard Scott, director of health services and community health services administrator with the county.

Last week, southern Minnesota cases rose most prominently. Throughout the state, hospitalizations are increasing (with over 7,500 hospitalized and 2,100 in intensive care, according to the Minnesota Department of Health).

BREAKING DOWN THE NUMBERS

According to the MDH, county deaths were mostly evenly spread between age groups, with one death per cluster, while two deaths each were of 65- to 69-year-olds, as well as 85- to 89-year-olds.

Carver County has the lowest case rate in the metro area, the MDH said, with over 1,400 cases (69 included hospitalizations). The highest case rates are in Anoka, Scott, and Hennepin counties.

Five percent of people in Carver County with COVID need to be hospitalized, Scott said.

Of the over 97,000 Minnesota COVID cases so far, over 2,000 have resulted in deaths (another 52 were suspected of having COVID but not confirmed). Just over 1,400 of those were of people living in assisted living or long-term care facilities, the MDH said.

Other cases can likely trace back to community outbreak, travel, healthcare and corrections. The lowest number of traceable cases is from the unhoused population, the MDH said.

ON A LARGER SCALE

Scott said nationally, new cases have been increasing and deaths have declined. Regionally, neighboring states like Wisconsin, Iowa and the Dakotas have “had some of the highest case rates in the county” last week.

Eleven vaccines are currently in phase-three trials as of last week, compared to nine the week before, Scott said.

He said there’s work to be done to keep reducing the impacts of COVID.

“We still need to reduce barriers and expand our testing capability. We also need to continue to be vigilant with our message on how to protect yourself and others,” Scott said.

That looks like staying home when sick, wearing a face mask, social distancing, washing your hands, and self-isolating when COVID is confirmed or suspected.

“Most of the outbreaks we are seeing are associated when people who forget or fail to practice these guidelines,” he added. 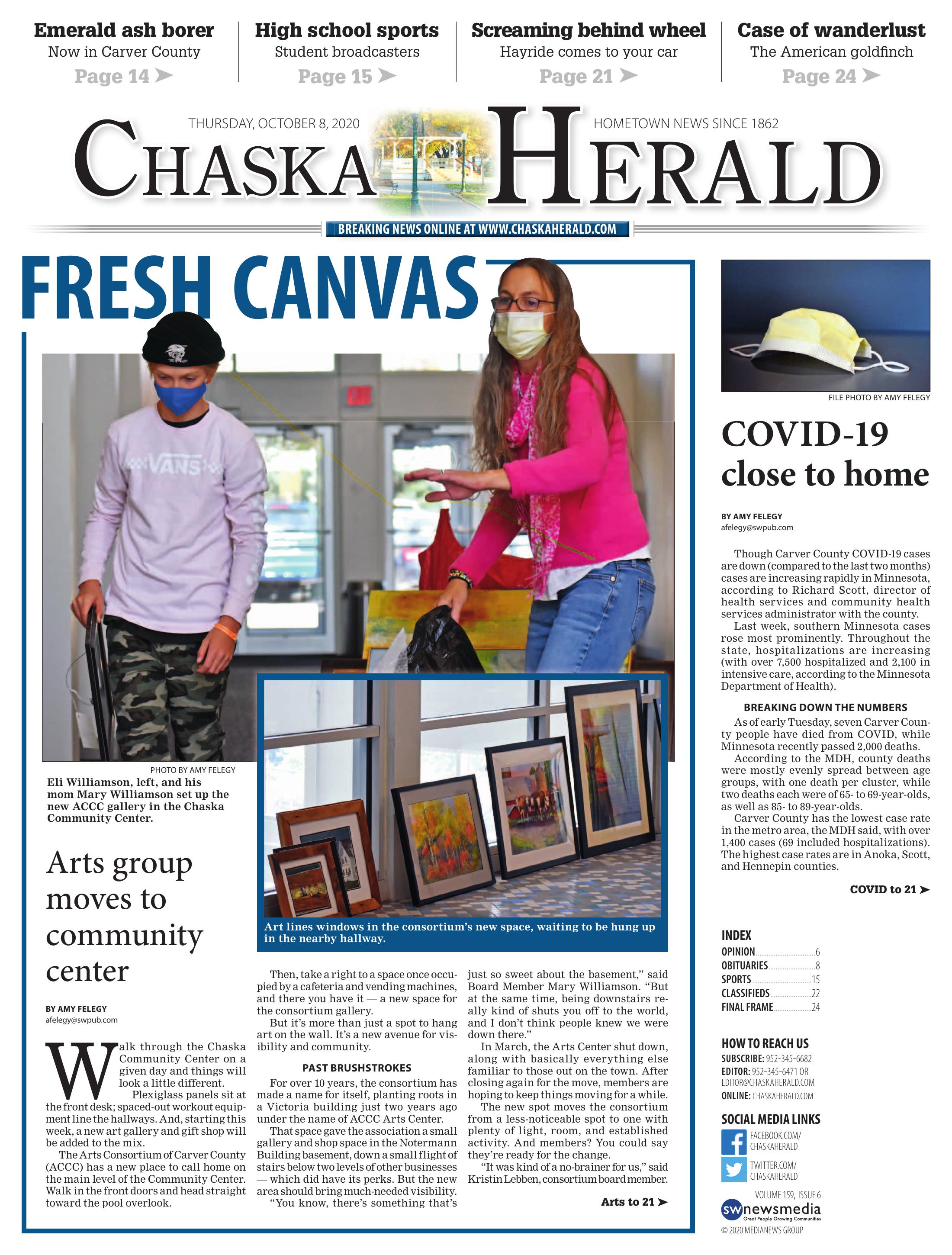