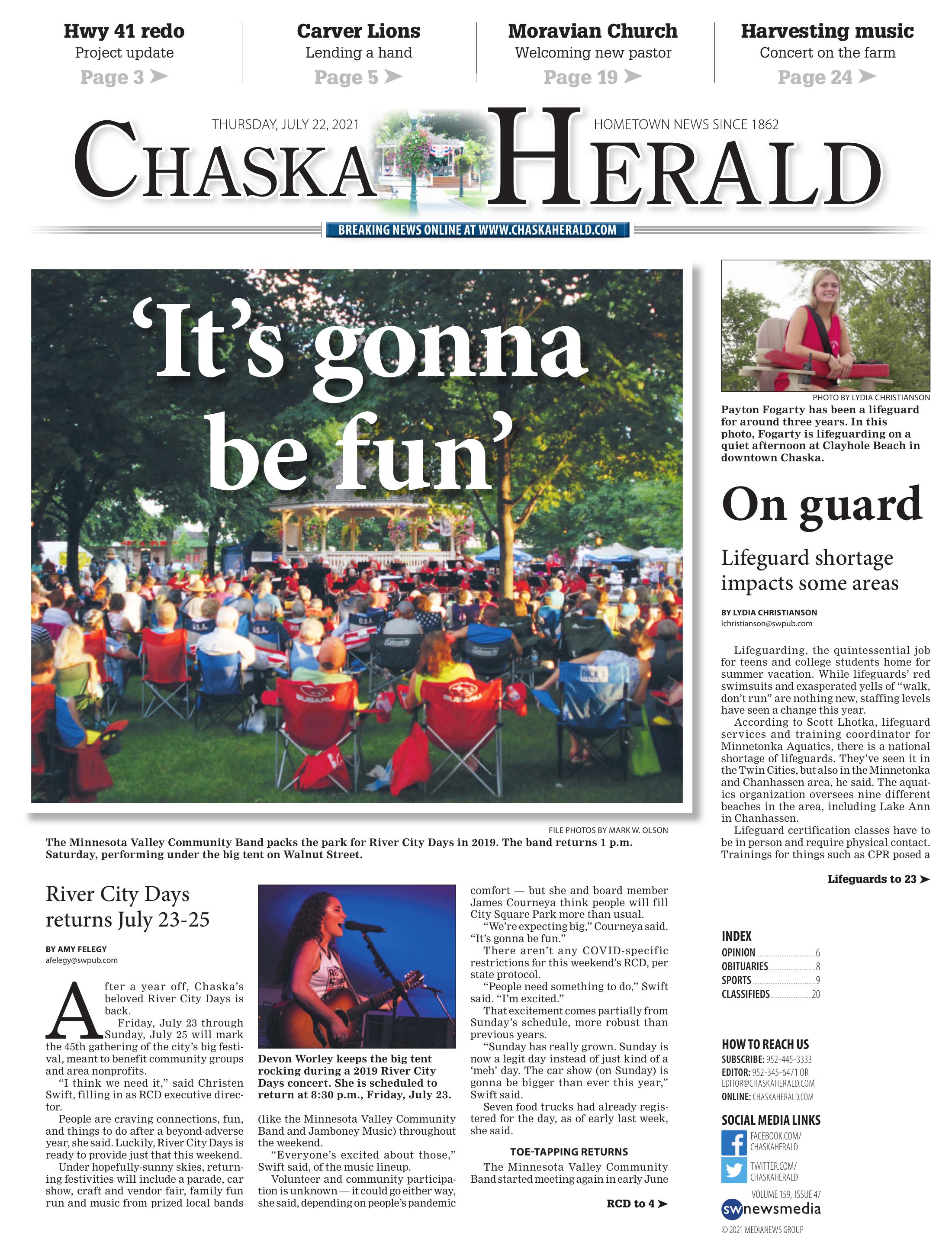 After a year off, Chaska’s beloved River City Days is back.

Friday, July 23 through Sunday, July 25 will mark the 45th gathering of the city’s big festival, meant to benefit community groups and area nonprofits.

“I think we need it,” said Christen Swift, filling in as RCD executive director.

People are craving connections, fun, and things to do after a beyond-adverse year, she said. Luckily, River City Days is ready to provide just that this weekend.

Under hopefully-sunny skies, returning festivities will include a parade, car show, craft and vendor fair, family fun run and music from prized local bands (like the Minnesota Valley Community Band and Jamboney Music) throughout the weekend.

“Everyone’s excited about those,” Swift said, of the music lineup.

Volunteer and community participation is unknown — it could go either way, she said, depending on people’s pandemic comfort — but she and board member James Courneya think people will fill City Square Park more than usual.

There aren’t any COVID-specific restrictions for this weekend’s RCD, per state protocol.

“People need something to do,” Swift said. “I’m excited.”

“Sunday has really grown. Sunday is now a legit day instead of just kind of a ‘meh’ day. The car show (on Sunday) is gonna be bigger than ever this year,” Swift said.

Seven food trucks had already registered for the day, as of early last week, she said.

The Minnesota Valley Community Band started meeting again in early June at Chanhassen High School (in the cafeteria instead of the band room for social distancing purposes).

After going without group practices for a year and some change, you might anticipate a bit of trouble finding the rhythm together again.

“I expected it to be, but it wasn’t. It was like we never stopped,” said longtime band director Barry Fox, calling every Monday night practice simply “fun.”

At that first rehearsal in June, a certain vigor filled the high-ceilinged space.

“You could really feel the enthusiasm and the energy and the happiness for being back,” Fox said.

And to top it off?

“We sounded good,” he said, crediting players for continuing to practice that year.

Only a handful of people didn’t rejoin the band after the long break, some due to moving away or other opportunities, others because they weren’t vaccinated (a band requirement).

After 30-plus years of playing at City Square Park’s gazebo on RCD Friday nights, this weekend they’ll play 1 p.m. Saturday under the big tent on Walnut Street, just to the east of the park, per RCD staff scheduling.

Though Fox is a little unnerved by the shift and hopes fans know about the change, it will be a tried-and-true bookend to the band’s two to three summer performances.

In the future, the Minnesota Valley Community Band’s summer commitments are uncertain.

“I think we’re just saying, ‘Well, for this year, we’ll take our lumps.’ We’re accustomed to playing twice a summer so we could play twice — the city says they could sponsor (us) twice in 2022,” Fox said.

Displayed throughout the pandemic virtually, the Chaska Historical Society is displaying its “Why Chaska?” exhibit in-person at RCD this weekend. It centers on why people chose to move here, why they stayed, and what they did in-between.

“Since we weren’t open last year, here’s the opportunity for everyone to actually see it in person,” Oberski said. “So it’ll definitely be worth people’s time to come in.”

As an added bonus, children will also have a chance to play with antique toys, Oberski said.

“(It would) just kind of make it all about representing all the different communities,” she said.

All in all, organizers are smiling at the chance to move forward with the longstanding summer shebang, all in the spirit of community.

Lifeguarding, the quintessential job for teens and college students home for summer vacation. While lifeguards’ red swimsuits and exasperated yells of “walk, don’t run” are nothing new, staffing levels have seen a change this year.

According to Scott Lhotka, lifeguard services and training coordinator for Minnetonka Aquatics, there is a national shortage of lifeguards. They’ve seen it in the Twin Cities, but also in the Minnetonka and Chanhassen area, he said. The aquatics organization oversees nine different beaches in the area, including Lake Ann in Chanhassen.

Lifeguard certification classes have to be in person and require physical contact. Trainings for things such as CPR posed a challenge with mask mandates and social distancing requirements. Many of the training facilities that offered lifeguard classes had to put a hold on their offerings because they weren’t able to do them safely. Classes that typically started in February were delayed until May.

This resulted in a “domino effect” on trying to recruit lifeguards, Lhotka said.

Lifeguards rotate to the different beaches depending on their availability. At Lake Ann, there are typically three to four lifeguards on duty throughout the beach’s lifeguarded hours of 11 a.m.-6 p.m.

Despite the organization having fewer lifeguards, it is able to provide adequate coverage. To provide that coverage, lifeguards are working extended hours and multiple days in a row, Lhotka said, adding it has put a strain on the system.

“Our lifeguards are amazing, but it’s ... a lot for them,” Lhotka said.

Lhotka doesn’t think staffing levels will return to normal this year, but hopes that by next summer they will be back on track. Lifeguards are typically high school and college students, so they start planning their summers in the spring, which is when the organization focuses on recruitment. Lhotka hopes to run more classes in late winter and early spring.

Lifeguard recruitment typically begins in the winter. In January, the organization starts to see who of its current staff will be coming back and recruitment for new guards begins around February.

The organization has been considering outside-the-box ways to increase recruitment and meet potential lifeguards face-to-face. It has also been looking at how to stay competitive with its wages so that people don’t overlook lifeguarding as a summer job.

“That’s another thing that we have seen just with the pandemic. There’s been a lot of jobs that have been opened up ... within the private world and a lot of our beaches and things like that are in the government sector,” Lhotka said. “So, trying to make sure that we can find that balance of still maintaining the budget ... but also maintaining and being able to recruit those people.”

Lhotka encourages anyone who is interested in becoming a lifeguard to reach out to aquatic organizations in the area. Any organization would love to recruit more lifeguards, he said.

According to Joe Yaeger the Chaska aquatics supervisor, he is in a different boat than aquatic organizations with seasonal lifeguarding. Those organizations are having a hard time replenishing lifeguards because of canceled certification classes.

The Chaska Community Center pool runs all year, so Yaeger is able to keep lifeguards year-round and doesn’t need to replenish for seasonal positions. On breaks such as summer vacation, certified college students return to work at the pool and Clayhole Beach.

Currently, Chaska aquatics has a typical number of lifeguards working this summer. Once the school year starts, Yaeger estimates he will lose two-thirds of his lifeguards. He plans to offer a certification class in August and has had several people reach out to him regarding classes.

“I’m slowly starting to be able to rebuild that (staffing),” Yaeger said.

Lindsay Smutka, 19, is a lifeguard at the Clayhole Beach and Chaska Community Center pool. She has worked as a lifeguard for a little over four years.

At the pool, things are mostly back to the way they were before COVID-19. The main difference is that people who want to swim laps have to sign up before so that the pool can monitor the number of people in the pool, Smutka said.

According to Smutka, the most rewarding part of her job is when a parent thanks her for saving their child. She recently jumped in the pool to save a 6-year-old boy who had wandered into too deep of water.

“Just seeing the relief on his mom’s face when I got in and grabbed him,” Smutka said.

When she sees someone struggling in the water, Smutka doesn’t think about what she needs to do. She knows someone is in trouble and immediately jumps in to help. Afterwards, she feels relieved and happy that the person is OK. Often times, it is children the lifeguards jump in to save. In the past four years, she has made five saves.

“It doesn’t happen as often as you would think,” Smutka said.