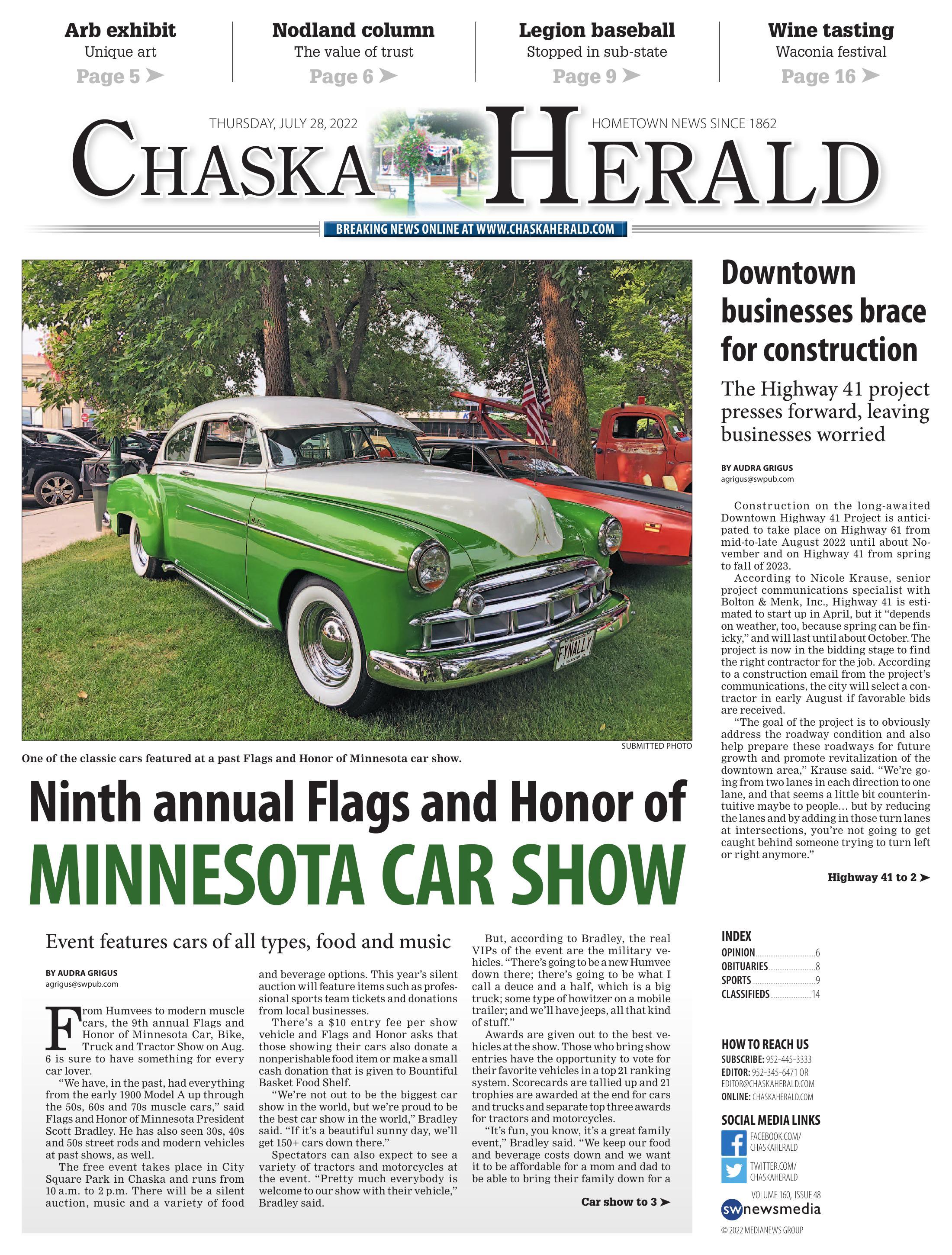 One of the classic cars featured at a past Flags and Honor of Minnesota car show.

From Humvees to modern muscle cars, the 9th annual Flags and Honor of Minnesota Car, Bike, Truck and Tractor Show on Aug. 6 is sure to have something for every car lover.

“We have, in the past, had everything from the early 1900 Model A up through the 50s, 60s and 70s muscle cars,” said Flags and Honor of Minnesota President Scott Bradley. He has also seen 30s, 40s and 50s street rods and modern vehicles at past shows, as well.

The free event takes place in City Square Park in Chaska and runs from 10 a.m. to 2 p.m. There will be a silent auction, music and a variety of food and beverage options. This year’s silent auction will feature items such as professional sports team tickets and donations from local businesses.

There’s a $10 entry fee per show vehicle and Flags and Honor asks that those showing their cars also donate a nonperishable food item or make a small cash donation that is given to Bountiful Basket Food Shelf.

Spectators can also expect to see a variety of tractors and motorcycles at the event. “Pretty much everybody is welcome to our show with their vehicle,” Bradley said.

But, according to Bradley, the real VIPs of the event are the military vehicles. “There’s going to be a new Humvee down there; there’s going to be what I call a deuce and a half, which is a big truck; some type of howitzer on a mobile trailer; and we’ll have jeeps, all that kind of stuff.”

Awards are given out to the best vehicles at the show. Those who bring show entries have the opportunity to vote for their favorite vehicles in a top 21 ranking system. Scorecards are tallied up and 21 trophies are awarded at the end for cars and trucks and separate top three awards for tractors and motorcycles.

“It’s fun, you know, it’s a great family event,” Bradley said. “We keep our food and beverage costs down and we want it to be affordable for a mom and dad to be able to bring their family down for a hamburger or hotdog, and a pop or beer, and not break the bank.”

The car show cooks all of its own food under Bradley’s business license and the cost of beverages is donated by the Chaska Lions.

All funds raised from the event will go toward the nonprofit and its work to support veterans.

“We’re 100% volunteer and not one of us takes one penny out of the organization,” Bradley said.

Public parking is available around the park and golf carts will provide accessible touring of the show for those who need it. Spectators with a disability who need the extra boost around the show can be picked up at the handicap parking spots located on Highway 41.

The car show is the largest event of the year for the organization, but the volunteers keep busy throughout the rest of the year, as well.

“We’ve got a couple of things that we have to fund internally to make us operate as far as insurance and things like that. Otherwise, you know, 98% of our income goes directly back to local veterans and their families,” Bradley said.

The organization provides Honor Guard assistance to local American Legions and VFWs when requested, has two buglers on hand to play taps at military funerals and supports veterans and their families in any other way it can.

“Maybe there’s a veteran on deployment right now and the spouse is here and with the kids and needs some additional help,” Bradley said. “Maybe it’s planting flowers or raking the yard, lawn mowing, snow removal, all kinds of different stuff. When the phone rings, we never know what the need is gonna be.”

With thousands of dollars being raised at the car show every year, Flags and Honor of Minnesota intends to continue the event as long as it can to continue supporting families.

“All the things that happen to you and I, happen to those folks too,” Bradley said.

“I walk a lot of Chaska and one of the most dangerous things I do is walk across the street,” said Dan Keyport, owner of Dolce Vita Wine Shop and president of the Chaska Downtown Business Alliance. “I think when this project is done, that will be a much safer exercise for everyone, and that’s a good thing. We’ve got a tough road to get there, but once we’re there it’s going to be actually quite nice.”

Eventually Highway 61 will be closed to traffic for a one block stretch from Highway 41 to Walnut Street.

Construction on the long-awaited Downtown Highway 41 Project is anticipated to take place on Highway 61 from mid-to-late August 2022 until about November and on Highway 41 from spring to fall of 2023.

According to Nicole Krause, senior project communications specialist with Bolton & Menk, Inc., Highway 41 is estimated to start up in April, but it “depends on weather, too, because spring can be finicky,” and will last until about October. The project is now in the bidding stage to find the right contractor for the job. According to a construction email from the project’s communications, the city will select a contractor in early August if favorable bids are received.

“The goal of the project is to obviously address the roadway condition and also help prepare these roadways for future growth and promote revitalization of the downtown area,” Krause said. “We’re going from two lanes in each direction to one lane, and that seems a little bit counterintuitive maybe to people… but by reducing the lanes and by adding in those turn lanes at intersections, you’re not going to get caught behind someone trying to turn left or right anymore.”

Krause describes paseos as, “basically a fancy name for a decorative walk and parking area.”

“There’s going to be two locations, one between Fifth Street and Fourth Street and then one from Third Street to Second Street,” Krause said.

“We’re working through the best way to help those businesses downtown and make sure we can still get people down there,” Krause said. “I think the general sentiment has been very collaborative with the (Chaska Downtown Business Alliance) and trying to think through solutions to getting people in the downtown area.”

“I’m concerned about the impact on my business while it’s occurring and I’m excited about how good it’ll be for my business, and for Chaska generally when it’s done,” said Dan Keyport, owner of Dolce Vita Wine Shop and CBDA president. “I kind of have mixed emotions on the whole thing.”

But other businesses worry that the efforts to make downtown accessible will not be enough.

“It’s an outstanding effort by the staff with the city, and I really appreciate their efforts, but it’s not going to work,” said Mike Webb, owner of Dunn Brothers Coffee on Second Street in Downtown Chaska. “I’m gonna close, I’m not even going to try.”

Preliminary staging plans presented at the open house in February showed the Highway 41 bridge, a main flow of traffic into downtown, as being closed for an extended period of time. According to Krause, “that has the possibility to be refined based on the contractor.”

When the bridge closes, Webb estimates his business will drop by 85% to 95%. Dunn Brothers Coffee has been around for 15 years and, according to Webb, his business has survived six city construction projects, six bridge closings due to the river flooding and made it through COVID-19.

“We succeeded when we probably should have failed,” Webb said. “And I mean, honestly, the only thing that’s going to shut me down technically is a decision made by elected officials in the City of Chaska and I haven’t heard from any of them.”

Being a former elected official himself, Webb was hopeful for some outreach from city officials regarding the impact of construction on downtown businesses. He has only heard from staff.

While the options for businesses like Dunn Brothers are limited, Keyport will focus on taking advantage of various means of selling his products.

“Actually the pandemic was a good primer for me in developing the ability to deliver and curbside pickup,” Keyport said. “One of the things I really am trying to do during this upcoming road construction this summer, and of course next summer, as well, is really stress and expand upon and advertise and advocate for my delivery services.”

“We’re developing an outstanding downtown place to do business after every business down here that’s already here fails,” Webb said. “When they get everything just perfect it’s going to be perfect for the next generation of business owners.”

For more information, visit the project’s website for more maps and materials from the previous open house.