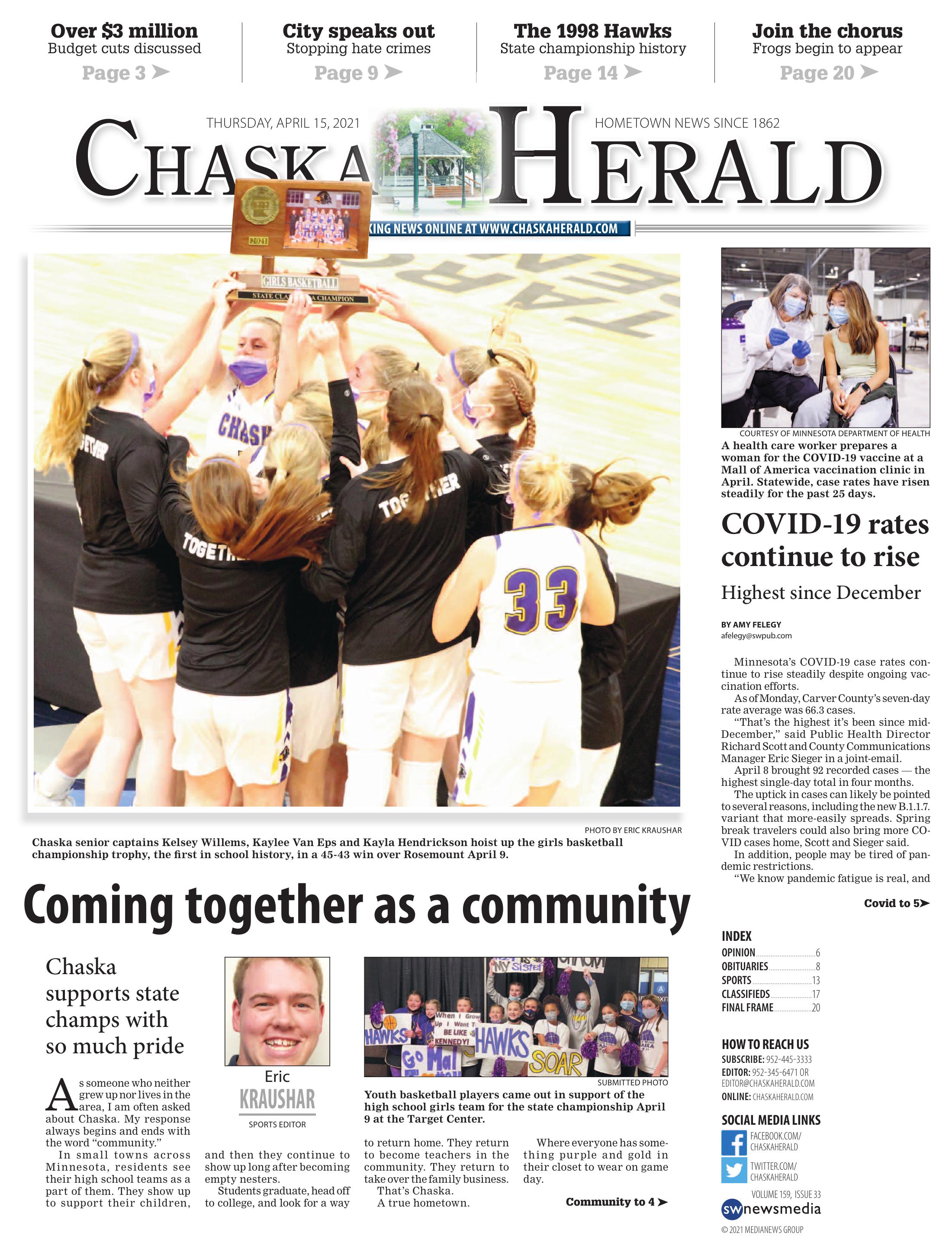 Youth basketball players came out in support of the high school girls team for the state championship April 9 at the Target Center.

As someone who neither grew up nor lives in the area, I am often asked about Chaska. My response always begins and ends with the word “community.”

In small towns across Minnesota, residents see their high school teams as a part of them. They show up to support their children, and then they continue to show up long after becoming empty nesters.

Students graduate, head off to college, and look for a way to return home. They return to become teachers in the community. They return to take over the family business.

Where everyone has something purple and gold in their closet to wear on game day.

Whether one of the lucky ones in-person April 9 for the state girls basketball championship, or watching from home on television, Chaska felt your support. They felt your love.

“We play for the name on the front of the jersey,” Chaska senior Kaylee Van Eps said at the welcome home celebration, where hundreds of fans gathered following the game in 44-degree weather after 10:30 p.m. in the stadium to cheer on the champs.

Like every other spectator, I held my breath over the final five seconds as Rosemount’s potential winning shot floated through the air. A huge sigh of relief was lifted when the clock hit zero, the scoreboard read Chaska 45, Rosemount 43.

Jon Summer, athletic director and assistant principal at Chaska High School, has become supporter No. 1 of the Hawks during his tenure. So it was only fitting that he utter the first words, “state champions,” and finish with a “Soar Hawks.”

Chaska Superfans rushed the stadium turf for a midfield celebration. Many stayed around for pictures, classmates and youth basketball players asking Van Eps and teammates for a photo op with the trophy.

Like the word on the back of the 2021 warm-up jerseys, “Together,” the city of Chaska and surrounding communities come together like no other for their Hawks.

I think I can speak for all of Chaska when I say congratulations Hawks! You are truly champions in the community, in the classroom and now on the court!

As of Monday, Carver County's seven-day rate average was 66.3 cases.

"That's the highest it's been since mid-December," said Public Health Director Richard Scott and County Communications Manager Eric Sieger in a joint-email.

The uptick in cases can likely be pointed to several reasons, including the new B.1.1.7. variant that more-easily spreads. Spring break travelers could also bring more COVID cases home, Scott and Sieger said.

In addition, people may be tired of pandemic restrictions.

"We know pandemic fatigue is real, and residents are struggling to maintain the same level of vigilance with mitigation strategies, especially around social gatherings," they said.

As of April 6, the state health department reported 497 Minnesotans were in the hospital being treated for COVID-19, with 114 in the intensive care unit.

COVID-19 related hospital bed usage was up by 40% within 10 days, Malcolm said.

Distance learning for all students is recommended with 14-day case rates higher than 50 cases per 10,000 residents, according to MDH guidelines.

On April 9, nine schools in Carver County were listed as follows:

A total of 159 schools are listed statewide.

To curb variant spread, MDH is recommending all school-age youth and their families be tested for COVID-19 every two weeks through the end of the school year. Youth involved in any extracurricular activities or sports should be tested weekly, guidance states.

Scott and Sieger said Carver County's vaccination rates are "very comparable" to other metro counties, and "even superior" when comparing rates for people older than 65. But the fight isn't over and people still need to wear masks, stay apart, and get vaccinated when they can, they said.

"This is a race against time to get as many residents vaccinated before we see another surge," Scott and Sieger said. "We’re optimistic we can win this race, but we need residents to continue practicing those key mitigation tactics."