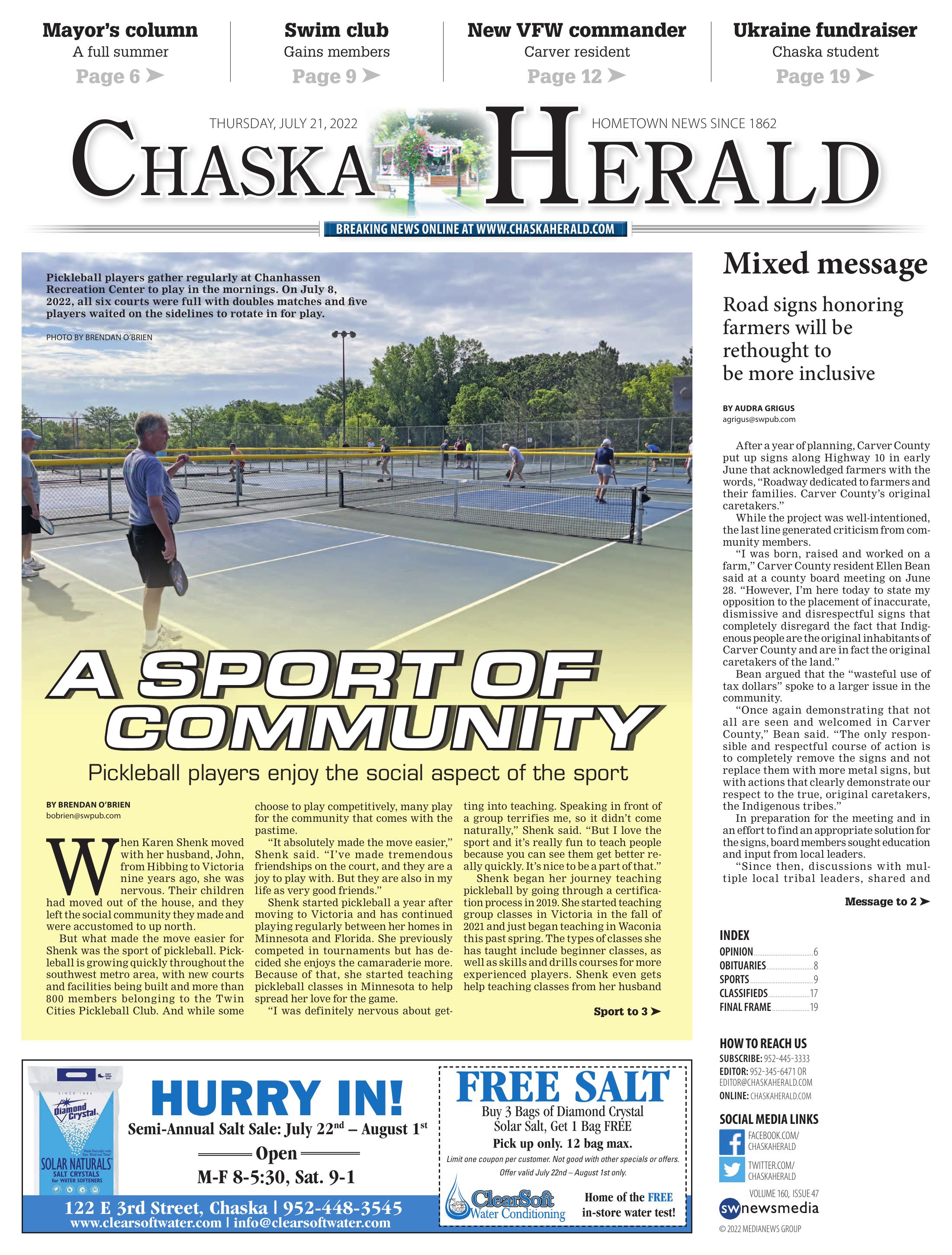 Pickleball players gather regularly at Chanhassen Recreation Center to play in the mornings. On July 8, 2022, all six courts were full with doubles matches and five players waited on the sidelines to rotate in for play.

Jeanette June prepares to serve a ball during a pickleball match on July 8, 2022. June plays pickleball about four times a week.

When Karen Shenk moved with her husband, John, from Hibbing to Victoria nine years ago, she was nervous. Their children had moved out of the house, and they left the social community they made and were accustomed to up north.

But what made the move easier for Shenk was the sport of pickleball. Pickleball is growing quickly throughout the southwest metro area, with new courts and facilities being built and more than 800 members belonging to the Twin Cities Pickleball Club. And while some choose to play competitively, many play for the community that comes with the pastime.

“It absolutely made the move easier,” Shenk said. “I’ve made tremendous friendships on the court, and they are a joy to play with. But they are also in my life as very good friends.”

Shenk started pickleball a year after moving to Victoria and has continued playing regularly between her homes in Minnesota and Florida. She previously competed in tournaments but has decided she enjoys the camaraderie more. Because of that, she started teaching pickleball classes in Minnesota to help spread her love for the game.

“I was definitely nervous about getting into teaching. Speaking in front of a group terrifies me, so it didn’t come naturally,” Shenk said. “But I love the sport and it’s really fun to teach people because you can see them get better really quickly. It’s nice to be a part of that.”

Shenk began her journey teaching pickleball by going through a certification process in 2019. She started teaching group classes in Victoria in the fall of 2021 and just began teaching in Waconia this past spring. The types of classes she has taught include beginner classes, as well as skills and drills courses for more experienced players. Shenk even gets help teaching classes from her husband and some friends she plays with, like Jeanette June.

June had a similar interest as Shenk in terms of getting to know more people in the community. When June’s husband, Walter, passed away, she knew she wanted to partake in an activity that would get her out of the house and help her continue to be social.

In 2011, she was walking around Eden Prairie and came across multiple people playing what almost looked like tennis but with a different ball and some paddles. June stopped and asked if she could watch them play, and she received an answer that at first caught her off guard but ultimately influenced her life in a meaningful way.

That one interaction has led to many different events in June’s life during the past 11 years: dinners with friends from the court, a trip to Kansas City, Missouri, for a pickleball festival and even a meeting with locals to play for a few hours during her trip to London, England.

As a retired teacher, June helps run introductory classes in Victoria that can be a precursor to a skills and drills class Shenk might teach and enjoys seeing how it is a sport for anyone no matter the age.

“The people were so nice to me when I started I wanted to do the same thing and pay it forward,” June said.

She volunteered for a national pickleball tournament in Naples, Florida, where she saw the wide age range of players on full display, as the youngest participant was nine years old and the oldest was 90.

Shenk and June play in a variety of places around the community. One of the locations, the Chanhassen Recreation Center, has six outdoor courts that are filled with four people on each court and others on the sidelines waiting to rotate in for the next game. They both plan to continue playing the ‘addicting’ sport with the community they have come to know and love.

“It almost has a culture of its own,” Shenk said. “I didn’t know many of these people before and now I would call them if I needed help with a flat tire or something.”

The new, green signs along Highway 10 were intended to honor farmers and their families but were instead met with criticism from the community for not being inclusive.

After a year of planning, Carver County put up signs along Highway 10 in early June that acknowledged farmers with the words, “Roadway dedicated to farmers and their families. Carver County’s original caretakers.”

While the project was well-intentioned, the last line generated criticism from community members.

“I was born, raised and worked on a farm,” Carver County resident Ellen Bean said at a county board meeting on June 28. “However, I’m here today to state my opposition to the placement of inaccurate, dismissive and disrespectful signs that completely disregard the fact that Indigenous people are the original inhabitants of Carver County and are in fact the original caretakers of the land.”

Bean argued that the “wasteful use of tax dollars” spoke to a larger issue in the community.

“Once again demonstrating that not all are seen and welcomed in Carver County,” Bean said. “The only responsible and respectful course of action is to completely remove the signs and not replace them with more metal signs, but with actions that clearly demonstrate our respect to the true, original caretakers, the Indigenous tribes.”

In preparation for the meeting and in an effort to find an appropriate solution for the signs, board members sought education and input from local leaders.

“Since then, discussions with multiple local tribal leaders, shared and found resources, the Carver County Historical Society, the county led Communities of Belonging efforts, a trip to the Hocokta Ti, deeper discussions about the burial mounds in downtown Chaska, the Pow Wow that was once held in Chaska and the original meaning, history and pronunciation of this place we call Chaska and more have been great opportunities to learn,” Commissioner Matt Udermann said.

The original planning process for the signs allegedly did not include consultation outside of the board.

Udermann added that “...the general sentiment from Dakota leaders, farmers and community is (that) a simple modification to the word ‘original’ allows for accomplishing the intent of honoring farmers without unintended hurt for those that occupied the land prior to 1855.”

Those options also raised some concerns from the community members in attendance. The board also discussed moving away from making the redone signs a brown color instead of the original green. Carver County Administrator David Hemze noted that “brown is a better color because of contrast.”

No decisions were made at the meeting and the project was to be further discussed at a later date.

“The work is never done, and I think this moment may provide for even richer dialogue, learning, sharing and collaboration — personally and as a community,” Udermann said.