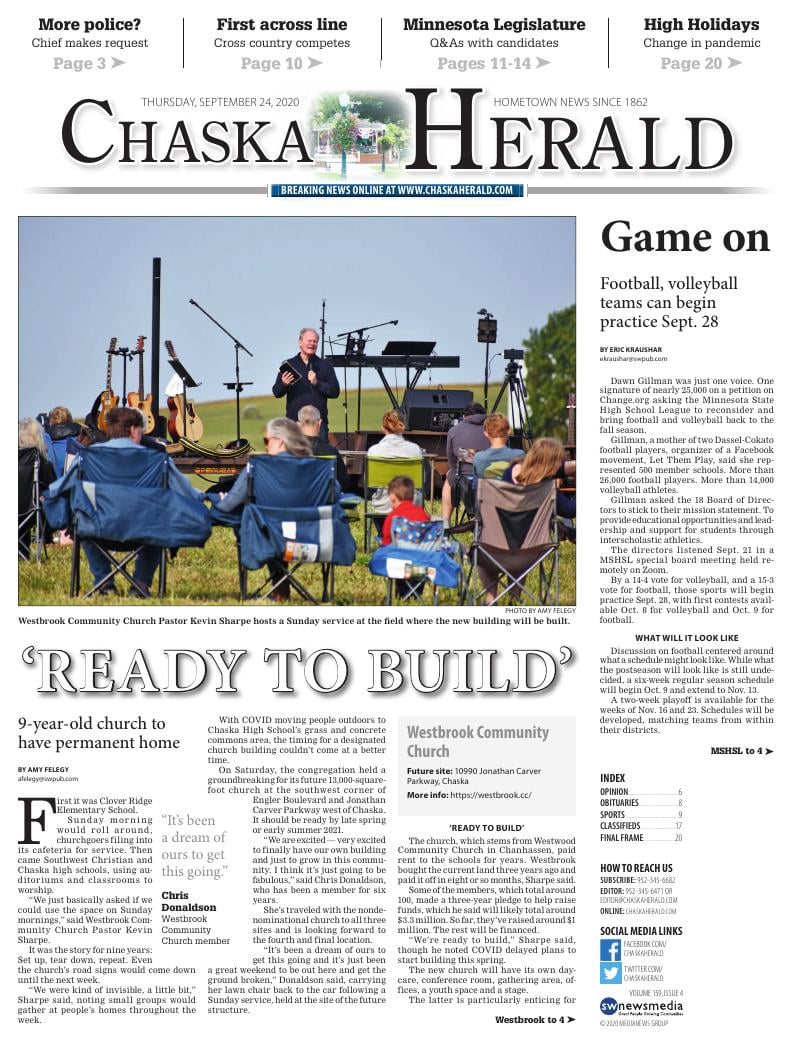 Westbrook Community Church Pastor Kevin Sharpe hosts a Sunday service at the field where the new building will be built.

Sunday morning would roll around, churchgoers filing into its cafeteria for service. Then came Southwest Christian and Chaska high schools, using auditoriums and classrooms to worship.

“We just basically asked if we could use the space on Sunday mornings,” said Westbrook Community Church Pastor Kevin Sharpe.

It was the story for nine years: Set up, tear down, repeat. Even the church’s road signs would come down until the next week.

“We were kind of invisible, a little bit,” Sharpe said, noting small groups would gather at people's homes throughout the week.

On Saturday, the congregation held a groundbreaking for its future 13,000-square-foot church at the southwest corner of Engler Boulevard and Jonathan Carver Parkway in Chaska. It should be ready by late spring or early summer 2021.

“We are excited — very excited to finally have our own building and just to grow in this community. I think it’s just going to be fabulous,” said Chris Donaldson, who has been a member for six years.

She’s traveled with the nondenominational church to all three sites and is looking forward to the fourth and final location.

“It’s been a dream of ours to get this going and it’s just been a great weekend to be out here and get the ground broken,” Donaldson said, carrying her lawn chair back to the car following a Sunday service, held at the site of the future structure.

The church, which stems from Westwood Community Church in Chanhassen, paid rent to the schools for years. Westbrook bought the current land three years ago and paid it off in eight or so months, Sharpe said.

Some of the members, which total around 100, made a three-year pledge to help raise funds, which he said will likely total around $3.3 million. So far, they’ve raised around $1 million. The rest will be financed.

The new church will have its own daycare, conference room, gathering area, offices, a youth space and a stage.

The latter is particularly enticing for musician Joe Scott, who is in the process of becoming a Westbrook member. He plays guitar with the church most weeks.

“I’m most happy about it,” Scott said.

Up until now, the sound crew wheeled equipment out every week. Someone had a trailer, and others had some time before the service to get everything ready. It won’t be quite like that anymore.

Scott said they’ll soon have a “very nice” sound and lighting system with audio-visual equipment flowing into different rooms of the building. There will be a stage, maybe 20 by 50-some feet, perfect for the guitarist, bassist, and singer (and his “very accomplished” co-musicians).

“I think there’s ‘The Word’ in capital letters … and then there’s ‘the word’ in lowercase and that’s what that music is. To have our own space with the right equipment is going to allow us to really accentuate the message,” he said. “It’s going to be a really nice space for the community.”

After working hard to get financing and plans set, Sharpe said the church closed on its mortgage in late August.

Within the next two weeks, construction will begin. Building panels should come by late October and the exterior should be mostly finished in November.

Sharpe said it’s not too uncommon for community churches to take seven to 10 years to get their own space. Others in the area don’t have buildings, meeting at the Chaska Community Center or at Bluff Creek Elementary.

“There are a lot of these smaller churches and that’s how you get started,” Sharpe said.

In 2011, Westbrook said it originally didn’t want to be “seen as competition” to other area churches and could fulfill its mission without a permanent space. Now, the building just gives them more leverage for that mission.

Sharpe said it should add a level of legitimacy to the ministry and help get visibility.

“Because we don’t have a permanent site or permanent building, people don’t realize you’re around,” he said.

Scott called the new church a blessing, and despite challenges people are ready for what’s next.

“Trying to do something of this magnitude as a new congregation is pretty difficult. There’s lots of curveballs and stuff along the way, and we’re all going to celebrate that,” he said.

In the meantime, people can watch construction progress on the open field that will soon be home to a new building — and their very own, at that.

“It’s been a dream of ours to get this going."

Dawn Gillman was just one voice. One signature of nearly 25,000 on a petition on Change.org asking the Minnesota State High School League to reconsider and bring football and volleyball back to the fall season.

Gillman asked the 18 Board of Directors to stick to their mission statement. To provide educational opportunities and leadership and support for students through interscholastic athletics.

The directors listened Sept. 21 in a MSHSL special board meeting held remotely on Zoom.

Discussion on football centered around what a schedule might look like. While what the postseason will look like is still undecided, a six-week regular season schedule will begin Oct. 9 and extend to Nov. 13.

A two-week playoff is available for the weeks of Nov. 16 and 23. Schedules will be developed, matching teams from within their districts.

"It’s about giving everyone an opportunity to participate," said Board Member Dustin Bosshart of St. Clair, focusing on a longer six-week regular season versus an extended postseason.

"From Day One, our football coaches have said fall is their season and that's when they'd like to play," said MSHSL Associate Director Bob Madison.

Results from 394 schools that responded to a MSHSL survey last week indicated 80% favored football this fall. Edina High School's Troy Stein, who represents Region 5AA/6AA, said 34 of his 38 schools voted for the fall.

The number was 76% in favor of fall volleyball from across the state.

Jody Redman, MSHSL associate director, said the pros for playing this fall — including less crossover with spring sports, a more traditional season, and available facilities — was expressed by the volleyball advisory board.

Volleyball will have 10 days of practice with first matches on Oct. 8. A team may play up to 14 regular season matches — no tournaments — over a seven-week stretch.

That timeline leaves two weeks for a culminating event for postseason play.

Chaska and Chanhassen co-op with Prior Lake and Shakopee for adapted soccer.

"I am really excited for our volleyball and football student-athletes to have the opportunity to participate, compete, and represent our amazing Chaska Hawks school community this fall!" said Chaska High School Athletic Director Jon Summer.

"We are five weeks into our current approved fall sport offerings and our successes in terms of ongoing practice and competition participation can be attributed to the collective commitment of our student-athletes, coaches, and entire school community engaging in “Stay Safe” practices outlined by MSHSL, MDE, MDH, and Eastern Carver County Schools. I am truly grateful for this community commitment and look forward to our continued partnership in supporting both the academic and co-curricular opportunities that are so instrumental in the development of each Chaska Hawk learner."

"I am impressed with the support of our communities so far this fall, and I look forward to adding football and volleyball," he said. 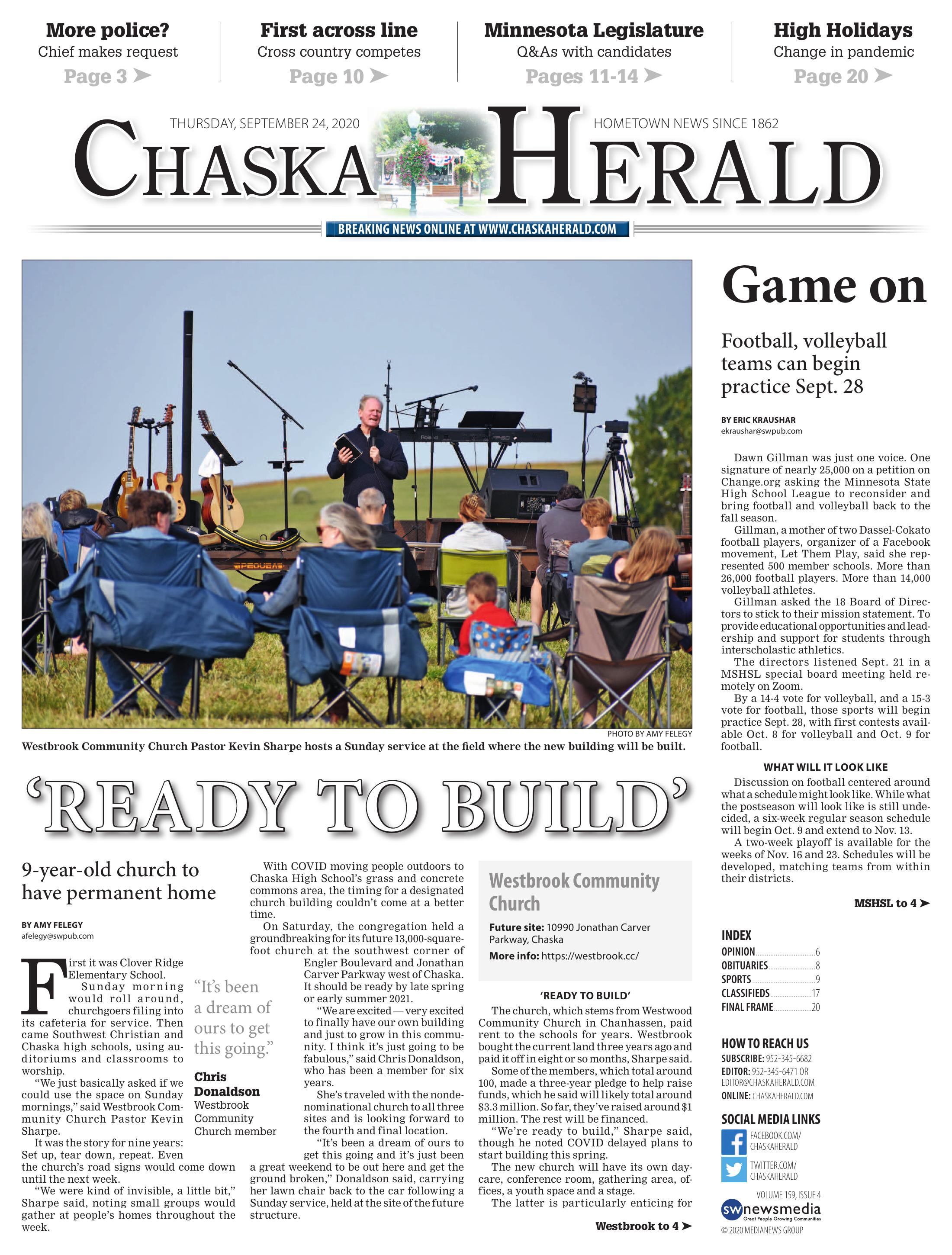