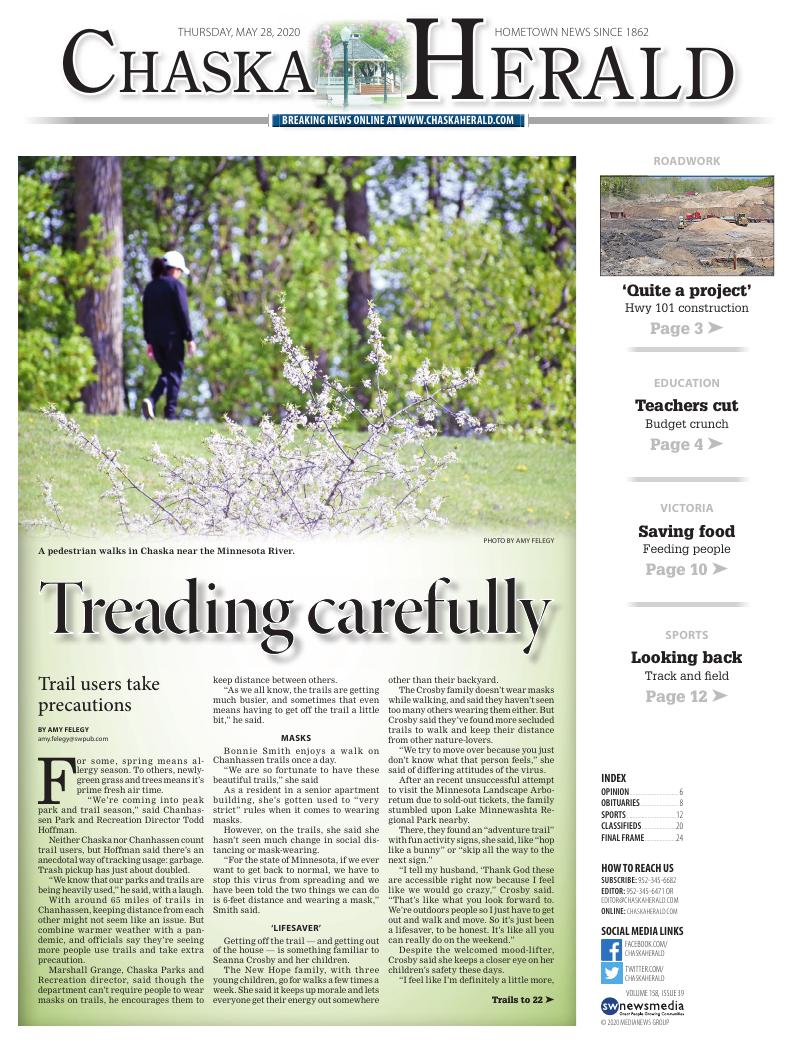 amy.felegy / Bicyclists ride along the Minnesota Valley Trail in Chaska.

amy.felegy / Walkers keep their distance, stepping to either side of the Chaska trail as they pass one another.

“We know that our parks and trails are being heavily used,” he said, with a laugh.

With around 65 miles of trails in Chanhassen, keeping distance from each other might not seem like an issue. But combine warmer weather with a pandemic, and officials say they’re seeing more people use trails and take extra precaution.

Marshall Grange, Chaska Parks and Recreation director, said though the department can’t require people to wear masks on trails, he encourages them to keep distance between others.

“As we all know, the trails are getting much busier, and sometimes that even means having to get off the trail a little bit,” he said.

Bonnie Smith enjoys a walk on Chanhassen trails once a day.

“We are so fortunate to have these beautiful trails,” she said

As a resident in a senior apartment building, she’s gotten used to “very strict” rules when it comes to wearing masks.

However, on the trails, she said she hasn’t seen much change in social distancing or mask-wearing.

“For the state of Minnesota, if we ever want to get back to normal, we have to stop this virus from spreading and we have been told the two things we can do is 6-feet distance and wearing a mask,” Smith said.

Getting off the trail — and getting out of the house — is something familiar to Seanna Crosby and her children.

The New Hope family, with three young children, go for walks a few times a week. She said it keeps up morale and lets everyone get their energy out somewhere other than their backyard.

The Crosby family doesn’t wear masks while walking, and said they haven’t seen too many others wearing them either. But Crosby said they’ve found more secluded trails to walk and keep their distance from other nature-lovers.

“We try to move over because you just don’t know what that person feels,” she said of differing attitudes of the virus.

After an recent unsuccessful attempt to visit the Minnesota Landscape Arboretum due to sold-out tickets, the family stumbled upon Lake Minnewashta Regional Park nearby.

There, they found an “adventure trail” with fun activity signs, she said, like “hop like a bunny” or “skip all the way to the next sign.”

“I tell my husband, ‘Thank God these are accessible right now because I feel like we would go crazy,” Crosby said. “That’s like what you look forward to. We’re outdoors people so I just have to get out and walk and move. So it’s just been a lifesaver, to be honest. It’s like all you can really do on the weekend.”

Despite the welcomed mood-lifter, Crosby said she keeps a closer eye on her children’s safety these days.

“I feel like I’m definitely a little more, ‘OK, don’t touch that,’” she said. “You’re just a little more cautious.”

This caution, Grange said, could look like a few things.

Let people know you’re coming from behind with a simple, “On your left!” or a bicycle bell ring. Make sure the dog is leashed. Try to keep headphone or music noise down to hear what’s around you.

“Just generally being more aware, too,” he said, though realizes it can be difficult.

“You’re approaching another person or group and it’s sort of hard, because instinctually we want to be ‘Minnesota nice’ and pass by and say, ‘Hi,’ but there’s sort of that awkward spreading out that takes place,” he added.

Even with plenty of trails to go around in Chaska — around 70 miles — Grange said there have been staffing changes to keep everyone safe.

“A big focus of ours is maintaining continuity of service, and so in order to do that we’ve really had to be careful in not getting a bunch of staff exposed at one time,” he said.

For a while, public works and park maintenance workers were split into three separate groups. One group would work for one week while the other two were on call, and so on.

“We built in sort of a quarantine period within there,” Grange said, but added they’ve recently “loosened” the structured schedule.

Signs are posted in Chanhassen skate parks, playgrounds and other gathering spaces to alert people of COVID guidelines like social distancing. Though not posted directly on trails, the department’s message remains: Be safe.

Hoffman said people can opt to go for walks earlier or later in the day, or in not-so-sunny weather. At the end of the day, he’s glad to see people utilizing trails and said they can make their own decisions about how and when to walk it out.

“During stressful times like we’re in right now, it’s a great way to relieve some of that stress,” Hoffman said.

“It’s encouraged. It’s a natural response to so many people being at home. We’re happy that the public trails and park systems are there.” 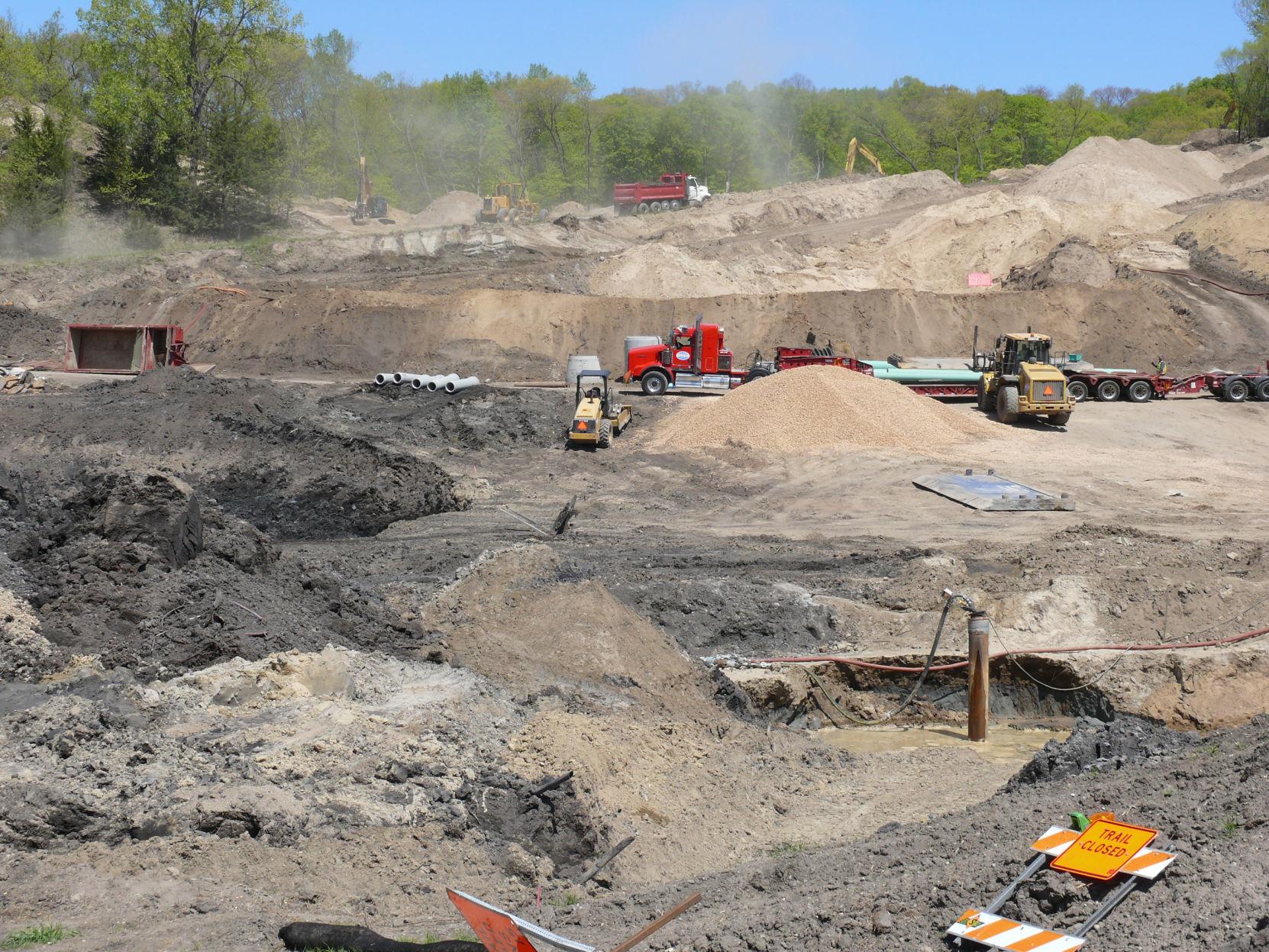 The Highway 101 project involves the excavation of about 480,000 cubic yards of material. 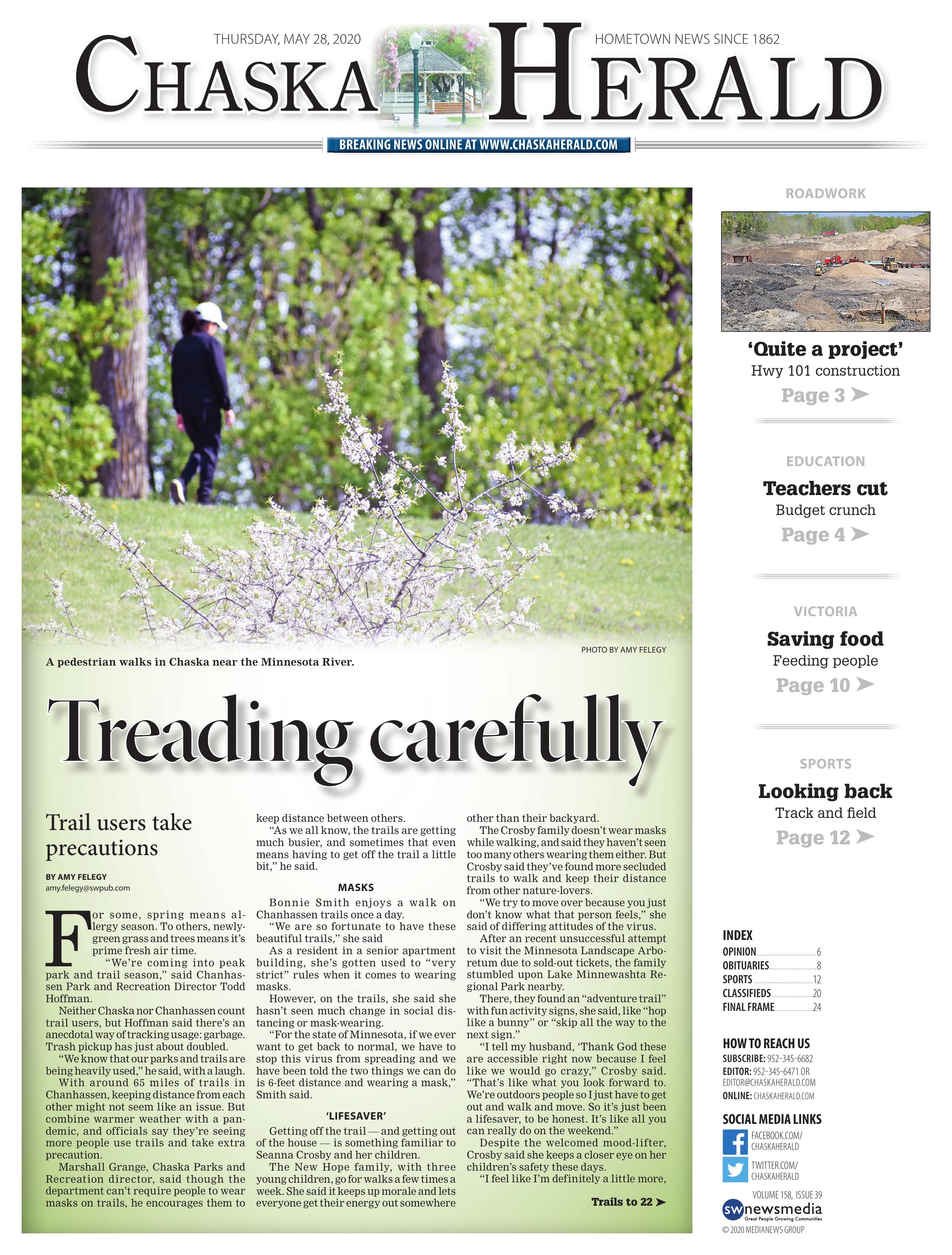