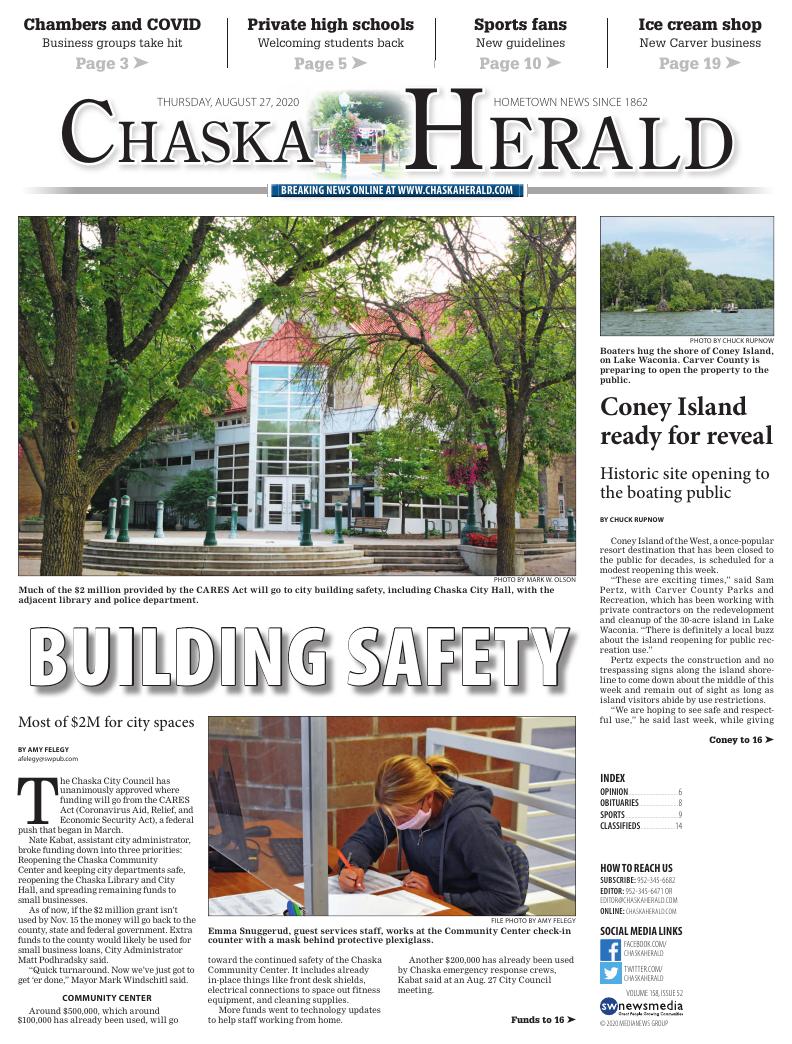 Much of the $2 million provided by the CARES Act will go to city building safety, including Chaska City Hall, with the adjacent library and police department.

The Chaska Library will have a new entrance vestibule to encourage social distancing.

The Chaska City Council has unanimously approved where funding will go from the CARES Act (Coronavirus Aid, Relief, and Economic Security Act), a federal push that began in March.

As of now, if the $2 million grant isn’t used by Nov. 15 the money will go back to the county, state and federal government. Extra funds to the county would likely be used for small business loans, City Administrator Matt Podhradsky said.

Around $500,000, which around $100,000 has already been used, will go toward the continued safety of the Chaska Community Center. It includes already in-place things like front desk shields, electrical connections to space out fitness equipment, and cleaning supplies.

Another $200,000 has already been used by Chaska emergency response crews, Kabat said at an Aug. 27 City Council meeting.

Though both buildings are in need of expansion, Kabat said the CARES Act focuses on upping safety, not room. That looks like around a $1.6 million renovation for the buildings, mainly layout changes.

The first is a new vestibule for the library’s entrance off the City Hall Plaza. It should help physically-distance visitors to limit how many times people interact at the library, which is currently only open for curbside pickup.

On the second floor, offices will be moved to a conference room with a service window to promote social distancing. In addition, a wall will be built where the front desk currently sits, and other workspaces will move to that area.

Current meeting spaces in that building are suitable for three or four people while social distancing. These changes will allow for up to eight.

“We truly believe we’re doing the right thing here and really believe that if we don’t do these things, we just can’t effectively open up City Hall safely,” Podhradsky said.

The police station will likely be reconfigured into more separated cubical areas and a new office space for detectives.

Also part of the $1.6 million portion is continued work to the community center. It includes automatic, touch-free doors at the main entrance and ice rink, which Kabat said are the most highly-used.

“This is a good decision now that fixes a problem right now, but it also helps problems in the future,” Councilor Jon Grau said.

The last part of this funding block would go toward HVAC upgrades in 20 city buildings to purify air.

Up to the $200,000 remaining would be used for the city’s small business emergency assistance program. Businesses can apply if they’ve had a certain revenue decrease due to COVID.

Boaters hug the shore of Coney Island, on Lake Waconia. Carver County is preparing to open the property to the public.

There are a number of historic sites on Coney Island.

A map of Coney Island.

Coney Island of the West, a once-popular resort destination that has been closed to the public for decades, is scheduled for a modest reopening this week.

“These are exciting times,” said Sam Pertz, with Carver County Parks and Recreation, which has been working with private contractors on the redevelopment and cleanup of the 30-acre island in Lake Waconia. “There is definitely a local buzz about the island reopening for public recreation use.”

Pertz expects the construction and no trespassing signs along the island shoreline to come down about the middle of this week and remain out of sight as long as island visitors abide by use restrictions.

“We are hoping to see safe and respectful use,” he said last week, while giving a tour of the island with its new trails, picnic areas and historic site designations. “If that doesn’t occur, I think it will be difficult for the county to continue to invest out here.”

“There is more work to be done,” he added. “Getting this open at this time of the year will give us a small idea of what the use might be and help us to plan for future use. A lot of what happens out here will be determined by the stewardship of the patrons.”

Historical records indicate the island was once a popular vacation spot, with many visitors taking a train to Waconia and boarding a ferry for a trip to the island, about a half mile from the city.

Minnesota Historical Society accounts indicate that there were three hotels, a number of cottages and boathouses, and concerts on the property, with the University of Minnesota football team even holding preseason practices on the property in the early 1900s.

Buildings eventually began deteriorating as the island’s popularity fizzled. In its heydays, there were reportedly 40-plus buildings on the island.

Waconia businessman and philanthropist Norman Hoffman, along with his wife Ann, after hearing in 2003 that a developer was interested in putting a resort and retreat center on the island, bought out the island’s six other property owners and began working with the county on a plan to clean up the island and open it up to public use.

In 2016, the county received a $900,000 donation from the Norman and Ann Hoffman Foundation for Coney Island cleanup efforts, a donation that ensured the land would be developed for public use as part of Lake Waconia Regional Park. The donation was made after the county purchased the property for just over $1 million.

“I can’t wait to see what’s out there,” Shannin Mikals of Waconia said last week, after hearing that the island would soon be available to the public. “I’ve heard they’re doing a lot of stuff out there; like trails and things. It sounds like it would be a nice place to check out.”

Pertz mentioned a significant amount of prep work for the project, including several archeological surveys.

“We’re not done,” he emphasized. “This was phase one. Each time we do more development, more archeological work will be needed too. There is plenty more to do.”

Private contractors were used for a variety of tasks on the island, including clearing trails and hauling materials.

A number of crushed limestone trails are on the property, with plans for more. There are foundational remnants of cottages and boathouses, with signage requesting visitors not disturb those sites.

A concrete trail, one that once led visitors to a popular hotel at the top of a hill, remains relatively intact, while several old, antique light poles adorn that trail.

“There is so much history here,” Pertz said. “Every time we’re out here, it seems like there are more discoveries.”

The goal for the island is to provide a place for conservationists and outdoor enthusiasts to enjoy the picnic areas, walk trails and appreciate the overall historic nature of the site.

“Anything of any value is long gone from here,” Pertz said, suggesting treasure seekers would not reap rewards.

Alcohol and tobacco are not permitted on the island, and no overnight use is allowed. A limited supply of firewood is available at several locations, to be used responsibly in designated fire rings. Law enforcement water patrols will be monitoring the island.

A small dock on the west end is solely available for loading and unloading purposes. Boaters are expected to anchor away from the dock to allow others to utilize the dock as needed.

Pertz suggests: island visitors avoid using the island if inclement weather is expected; stay on trails and in designated picnic areas to avoid hazards; and be aware that there are no restroom facilities.

Restrooms, additional docking facilities and other amenities are on the list of anticipated improvements, said Pertz, who would also like to see a water taxi service available by next summer.

Pertz said there has already been evidence of people trespassing on the island and not abiding by guidelines — not properly disposing of debris and using alcohol.

“We want this to be patron-led, where people encourage each other to be a good example to each other, so that it can be enjoyed by many people for many years,” he said.

The island will be open year round, meaning the county will be coordinating with local snowmobile clubs and groups to establish proper winter use on the island.

More information can be found at carvercountyparks.com or by calling 952-466-5250. 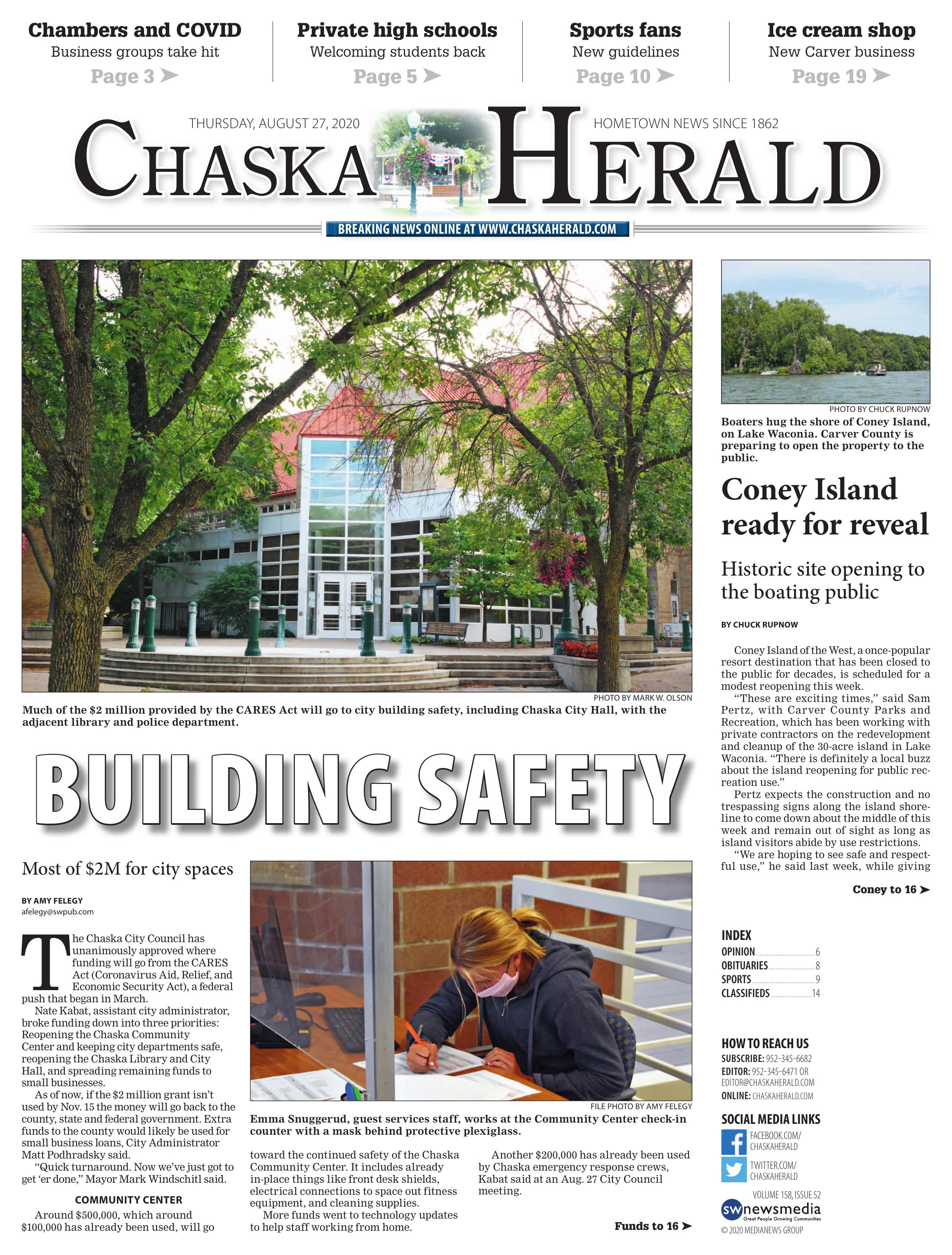