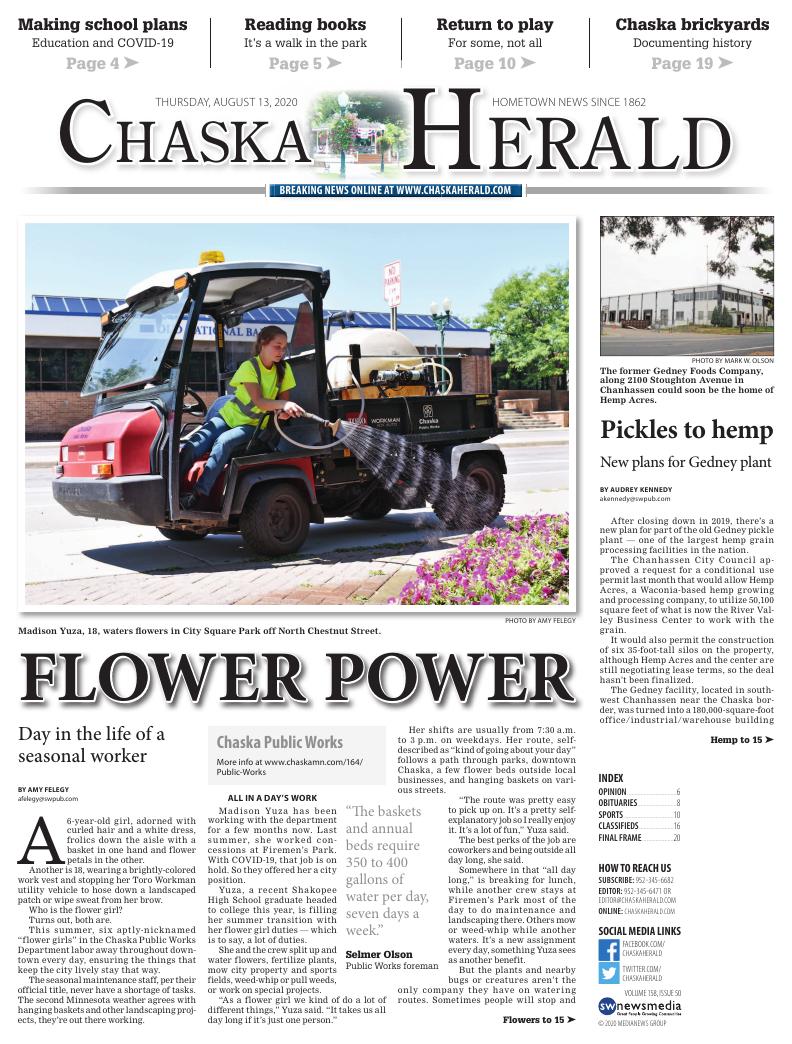 It’s a walk in the park

A hanging flower basket, installed and maintained by seasonal public works staff, serves as a reminder of summer in downtown Chaska.

A 6-year-old girl, adorned with curled hair and a white dress, frolics down the aisle with a basket in one hand and flower petals in the other.

Another is 18, wearing a brightly-colored work vest and stopping her Toro Workman utility vehicle to hose down a landscaped patch or wipe sweat from her brow.

Who is the flower girl?

Turns out, both are.

This summer, six aptly-nicknamed “flower girls” in the Chaska Public Works Department labor away throughout downtown every day, ensuring the things that keep the city lively stay that way.

The seasonal maintenance staff, per their official title, never have a shortage of tasks. The second Minnesota weather agrees with hanging baskets and other landscaping projects, they’re out there working.

ALL IN A DAY’S WORK

Madison Yuza has been working with the department for a few months now. Last summer, she worked concessions at Firemen’s Park. With COVID-19, that job is on hold. So they offered her a city position.

Yuza, a recent Shakopee High School graduate headed to college this year, is filling her summer transition with her flower girl duties — which is to say, a lot of duties.

She and the crew split up and water flowers, fertilize plants, mow city property and sports fields, weed-whip or pull weeds, or work on special projects.

“As a flower girl we kind of do a lot of different things,” Yuza said. “It takes us all day long if it’s just one person.”

Her shifts are usually from 7:30 a.m. to 3 p.m. on weekdays. Her route, self-described as “kind of going about your day” follows a path through parks, downtown Chaska, a few flower beds outside local businesses, and hanging baskets on various streets.

“The route was pretty easy to pick up on. It’s a pretty self-explanatory job so I really enjoy it. It’s a lot of fun,” Yuza said.

The best perks of the job are coworkers and being outside all day long, she said.

Somewhere in that “all day long,” is breaking for lunch, while another crew stays at Firemen’s Park most of the day to do maintenance and landscaping there. Others mow or weed-whip while another waters. It’s a new assignment every day, something Yuza sees as another benefit.

But the plants and nearby bugs or creatures aren’t the only company they have on watering routes. Sometimes people will stop and ask questions, directions, or just compliment the easy-on-the-eyes flower baskets, Yuza said.

Behind the six “flower girls” and other seasonal staff is someone who keeps work in front of them.

Selmer Olson, public works foreman, has been in the scene for 15 years. He said the first order of business every year is getting to know staff. After that comes the work itself.

It all started in 2000, with the hanging flower baskets and downtown gardens. On a yearly basis, work starts in the spring with plant layout to get an idea of what goes where, and when. Up next are maintenance projects, like mulching or installing tree rings.

"The baskets and annual beds require 350 to 400 gallons of water per day, seven days a week."

Throughout the season, the workers might tidy up landscape beds around buildings or spaces like the old Ernst House or parking lot green spaces.

All in all, the baskets and annual beds require 350 to 400 gallons of water per day, seven days a week if there’s no rain.

“There’s always something to do,” Olson said.

Around 17 seasonal workers, a handful of them flower girls, work in the parks and with the street department all summer. This year’s pandemic has made those projects look a little different, and perhaps a little less in quantity. Olson calls it a “crazy summer.”

Taste of Chaska and River City Days are when seasonal workers help set up or clean. Less organized sports and events affect the public works team too in terms of mowing sports fields.

“It’s been a lot different this summer,” Olson said. “Usually baseball is ready to go right off the gate as soon as the snow is gone.”

Pandemic aside, the weather can sometimes be the hardest boss to work with in an outdoor job. If there’s a downpour on a weekend, work is off.

But during the week, a little rain never hurt.

Staff may not water flowers in that case, but switch to other tasks, like tending to park shelters or deep-cleaning areas and equipment.

“It’s pretty rare for it to be really, really wet for us to send people home,” Olson said.

“It’s a ‘flower girl’ position, but that’s not by any means only hiring girls,” he said, noting a lot of jobs are filled by word-of-mouth through previous employees.

More genders are represented in the Firemen’s Park crew, he said.

But since lots of the seasonal workers are students, turnaround is an issue Olson grapples with year after year.

Even if some stay for three or for years, which tends to happen relatively frequently, he worries he could lose a big chunk of staff one year if they’re from the same class. That would leave few veterans left to train in new folks.

After that technical aspect is nailed down, staff get to work. But for flower girls like Yuza, it’s a pleasant job.

“A lot of people just kind of ask what I do and if I enjoy it,” she said.

For some, not all

The former Gedney Foods Company, along 2100 Stoughton Avenue in Chanhassen could soon be the home of Hemp Acres.

After closing down in 2019, there’s a new plan for part of the old Gedney pickle plant — one of the largest hemp grain processing facilities in the nation.

The Chanhassen City Council approved a request for a conditional use permit last month that would allow Hemp Acres, a Waconia-based hemp growing and processing company, to utilize 50,100 square feet of what is now the River Valley Business Center to work with the grain.

It would also permit the construction of six 35-foot-tall silos on the property, although Hemp Acres and the center are still negotiating lease terms, so the deal hasn’t been finalized.

The Gedney facility, located in southwest Chanhassen near the Chaska border, was turned into a 180,000-square-foot office/industrial/warehouse building last year. A 40,000-square-foot portion of the center is also being used by International Parts Supply to store decommissioned military equipment, according to the facility’s co-owner Joel Buttenhoff.

Hemp is a high-cannabidiol (CBD) variety of the cannabis plant. However, hemp contains less than .03 percent of tetrahydrocannabinol (THC), a psychoactive compound of cannabis.

Hemp is primarily grown for its derived products, which can range from industrial textiles, food, building materials and body care.

While hemp has been grown for thousands of years, it has battled issues with legalization for decades. The government briefly re-legalized hemp during WWII and heavily subsidized it — War Hemp Industries, one of the largest processing hemp facility in the world, was located in Hutchinson, Minnesota. (The building is now a 3M plant.)

But after the war, hemp reverted back to its illegal status. In 2015, Minnesota passed a law allowing cultivation of hemp as part of a regulated pilot program, and hemp was legalized nationwide under the Agriculture Improvement Act of 2018.

Hemp Acres founder Charlie Levine was in the process of converting his grandparents’ Waconia farm from raising Black Angus cattle to growing apple trees for hard cider. But when hemp became legal in 2016, Levine jumped on the opportunity and said the operation is now the biggest hemp processing facility in Minnesota. The farm sells to wholesalers and has its own direct-to-retail brand.

“This is a brand new crop and a brand new industry. I’m the first one to stick my neck out, I guess,” Levine said.

Grain production also has minimal effects on the surrounding community. There’s no waste, Levine said, because anything that can’t be turned into a protein powder makes for great livestock feed or fertilizer. And while there’s a marijuana-like smell when processing CBD, the facility will only work with the grain, which has no odor, he said.

The expansion to the business center means his farm can now focus exclusively on CBD processing and move its grain operation elsewhere. They also won’t grow the majority of the grain themselves — Levine will contract with Minnesota farmers to buy 5,000 to 10,000 acres worth of hemp.

The move is a huge jump; the Waconia farm is around 1,600 square feet and has three employees. But after years of trailblazing hemp processing in Minnesota, Levine is ready to triple his staff and scale his operation. Ultimately, Levine hopes to acquire the entire building.

“I think it’s a great opportunity,” Chanhassen Planning Commission Chair Steven Weick said in a meeting last month. “It’s certainly a market that is growing, and it’s nice to have someone using that old location for a new purpose.”

If the business center owners and Hemp Acres agree on lease terms, they expect to move in by October and begin operating by January of next year, Levine said. 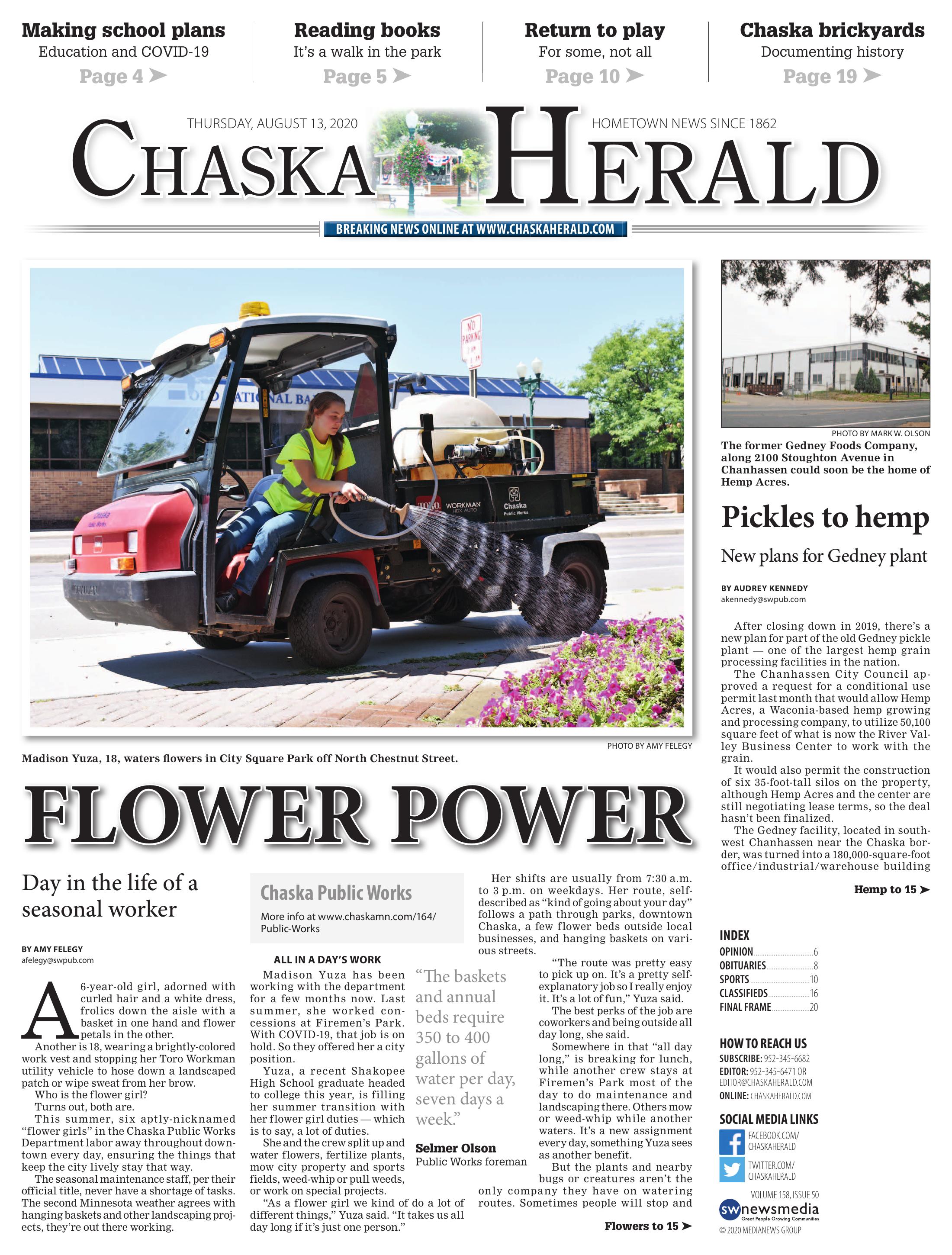