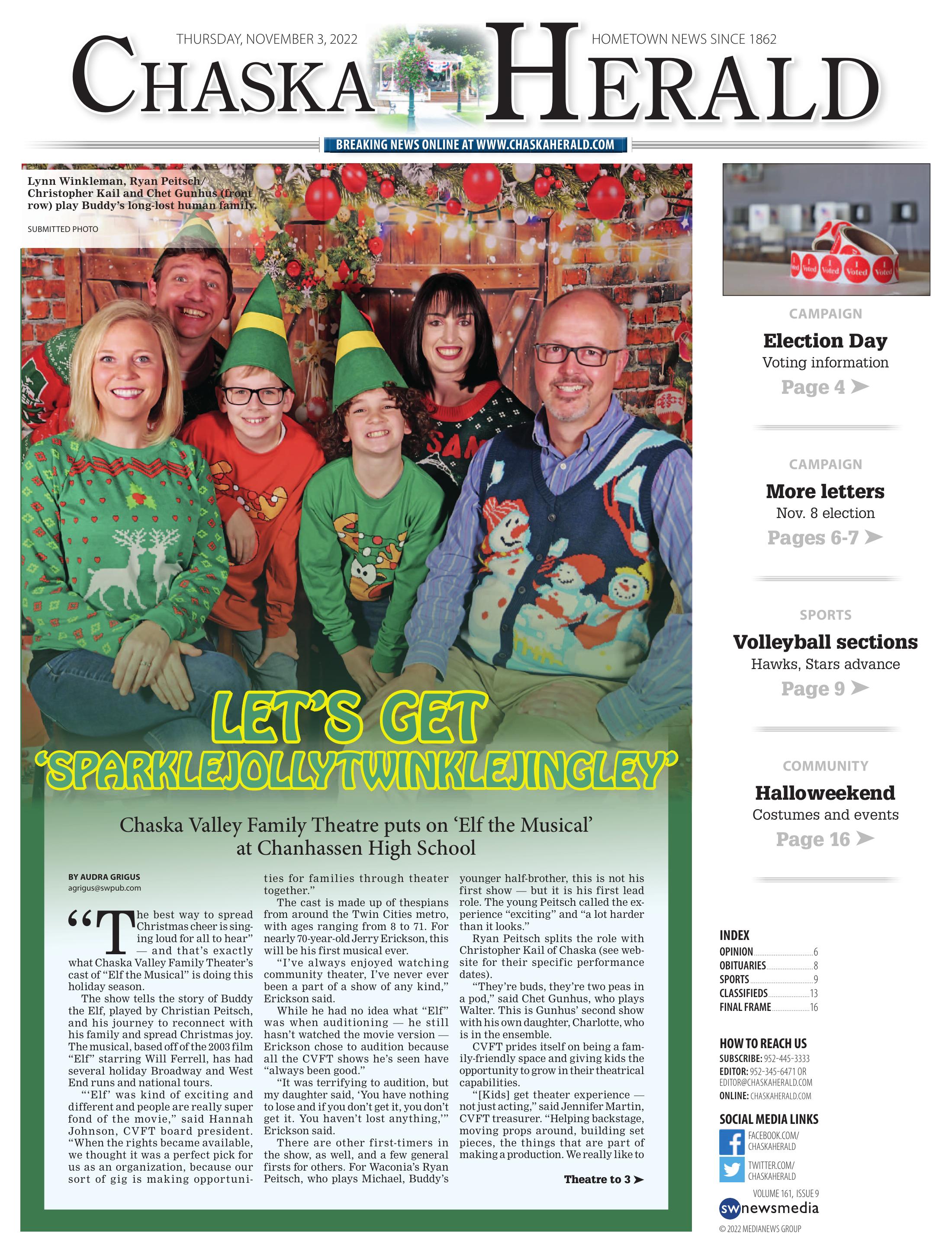 Father and son duo Christian and Ryan Peitsch play two of the leads in “Elf the Musical,” Buddy the Elf and Michael, respectively. The two have done shows in the past with CVFT and this is Ryan’s first lead role.

“The best way to spread Christmas cheer is singing loud for all to hear” — and that’s exactly what Chaska Valley Family Theatre’s cast of “Elf the Musical” is doing this holiday season.

The show tells the story of Buddy the Elf, played by Christian Peitsch, and his journey to reconnect with his family and spread Christmas joy. The musical, based off of the 2003 film “Elf” starring Will Ferrell, has had several holiday Broadway and West End runs and national tours.

“‘Elf’ was kind of exciting and different and people are really super fond of the movie,” said Hannah Johnson, CVFT board president. “When the rights became available, we thought it was a perfect pick for us as an organization, because our sort of gig is making opportunities for families through theater together.”

The cast is made up of thespians from around the Twin Cities metro, with ages ranging from 8 to 71. For nearly 70-year-old Jerry Erickson, this will be his first musical ever.

“I’ve always enjoyed watching community theater, I’ve never ever been a part of a show of any kind,” Erickson said.

While he had no idea what “Elf” was when auditioning — he still hasn’t watched the movie version — Erickson chose to audition because all the CVFT shows he’s seen have “always been good.”

There are other first-timers in the show, as well, and a few general firsts for others. For Waconia’s Ryan Peitsch, who plays Michael, Buddy’s younger half-brother, this is not his first show — but it is his first lead role. The young Peitsch called the experience “exciting” and “a lot harder than it looks.”

“They’re buds, they’re two peas in a pod,” said Chet Gunhus, who plays Walter. This is Gunhus’ second show with his own daughter, Charlotte, who is in the ensemble.

CVFT prides itself on being a family-friendly space and giving kids the opportunity to grow in their theatrical capabilities.

“[Kids] get theater experience — not just acting,” said Jennifer Martin, CVFT treasurer. “Helping backstage, moving props around, building set pieces, the things that are part of making a production. We really like to give, especially the kids, the opportunity to learn about all aspects of theater.”

The joy of theater

“Elf the Musical” is a spirited story centered on family and the power of kindness, and each cast member has their own personal connection to the story and their character.

“I think about it as like a redemption story, or returning to faith or capturing faith again,” said Gunhus, who plays the antagonist of the show, a character who has no belief in Christmas.

Every cast is different, and a lot of those in “Elf the Musical” are particularly fond of this one.

“This is one of the best ensembles I’ve ever been a part of,” ensemble member Matthew Tiede said. “The fact that everyone is just clicking with each other and they’re keeping up with the rehearsals and all the material, it just ups confidence and makes everyone enjoy each other even more.”

Christian Peitsch said that this is one of the best casts he’s “ever been a part of musical-wise.” Peitsch not only gets encouragement from the rest of the cast, he also draws energy from his character as well.

“The character Buddy, he’s happy, he’s overly confident most of the time,” Peitsch said. “No matter how I’m feeling, when I come here I just try to be happy… it’s amazing how even a little bit of pretending while I’m reading the script changes how I feel inside and makes me feel so much happier.”

Tom Muhs, Chanhassen resident, CVFT vice president and Store Manager in the show, emphasized how much Peitsch “embodies Buddy in who he is as a human being.”

In order to ensure that the fun could continue from rehearsal to rehearsal, all cast and crew have been wearing masks.

“It honestly saved us from a lot of, not just COVID illness, but illness in general,” Johnson said. “As much as it’s maybe not always fun to wear masks, it really has helped us in terms of the health and wellness of our cast… If the whole cast goes down, we have no show.”

CVFT will be keeping an eye on CDC guidelines and follow masking guidelines accordingly. Cast and audiences will not be required to wear masks for performances as of now.

The large cast will be entertaining audiences with Christmas-themed humor from Dec. 2 to 11 at Chanhassen High School. The show is directed by Anna Olson, music direction by Casey and Sean Barker, choreography from Naomi Muhs, daughter of Tom Muhs, and pit direction from Josh Roeser.

According to Martin, there will be one sensory friendly performance, meaning that the lights in the house will be up a bit more and audience members can move around as needed.

“As part of our mission about being inclusive and obviously welcoming diverse populations onstage and offstage, we try to offer those opportunities for families or people who may need a different viewing experience, because theater should be for everyone,” Martin said.

Tickets: Can be purchased at the door or online at www.cvft.org/elf2022. 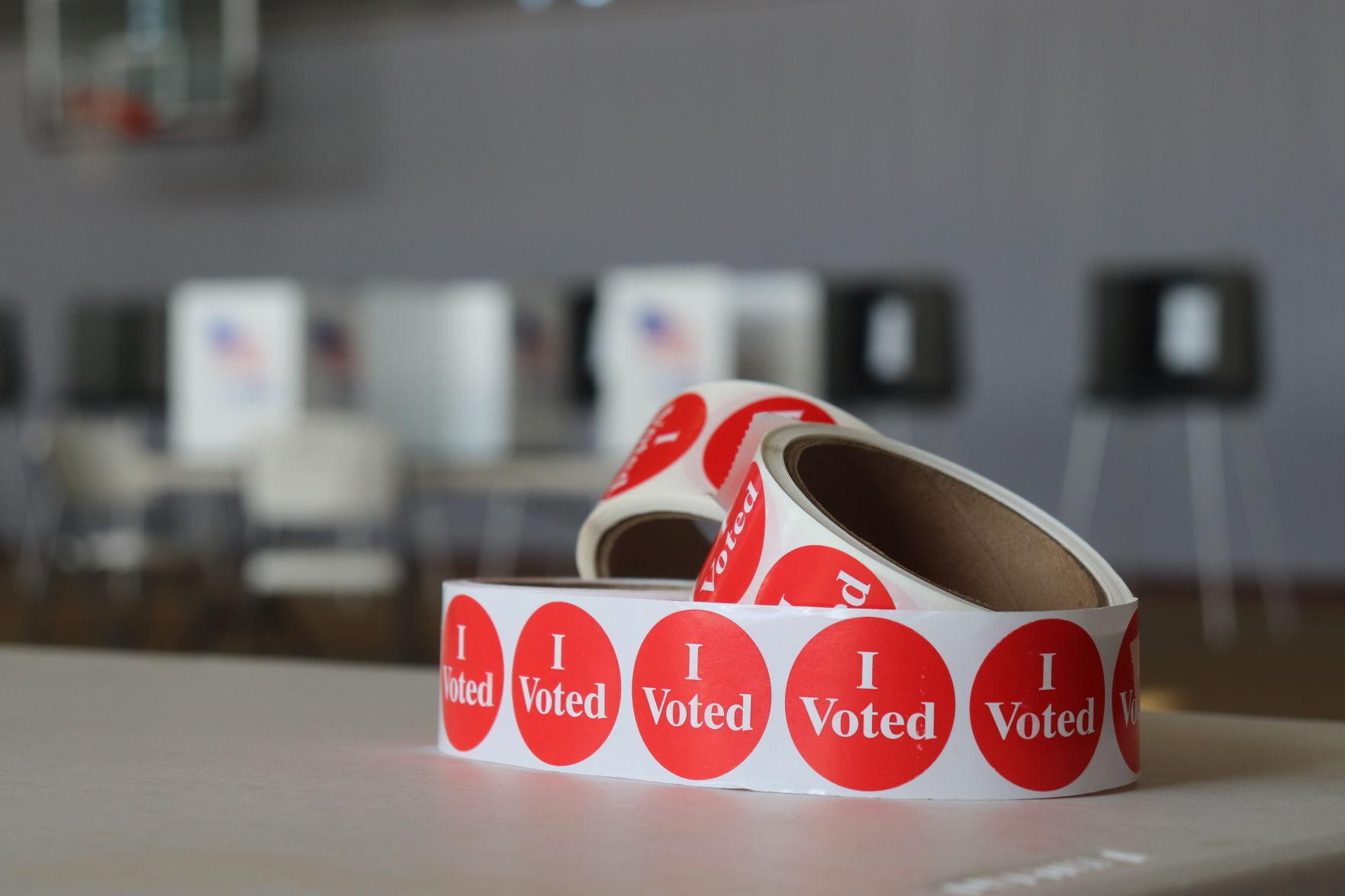