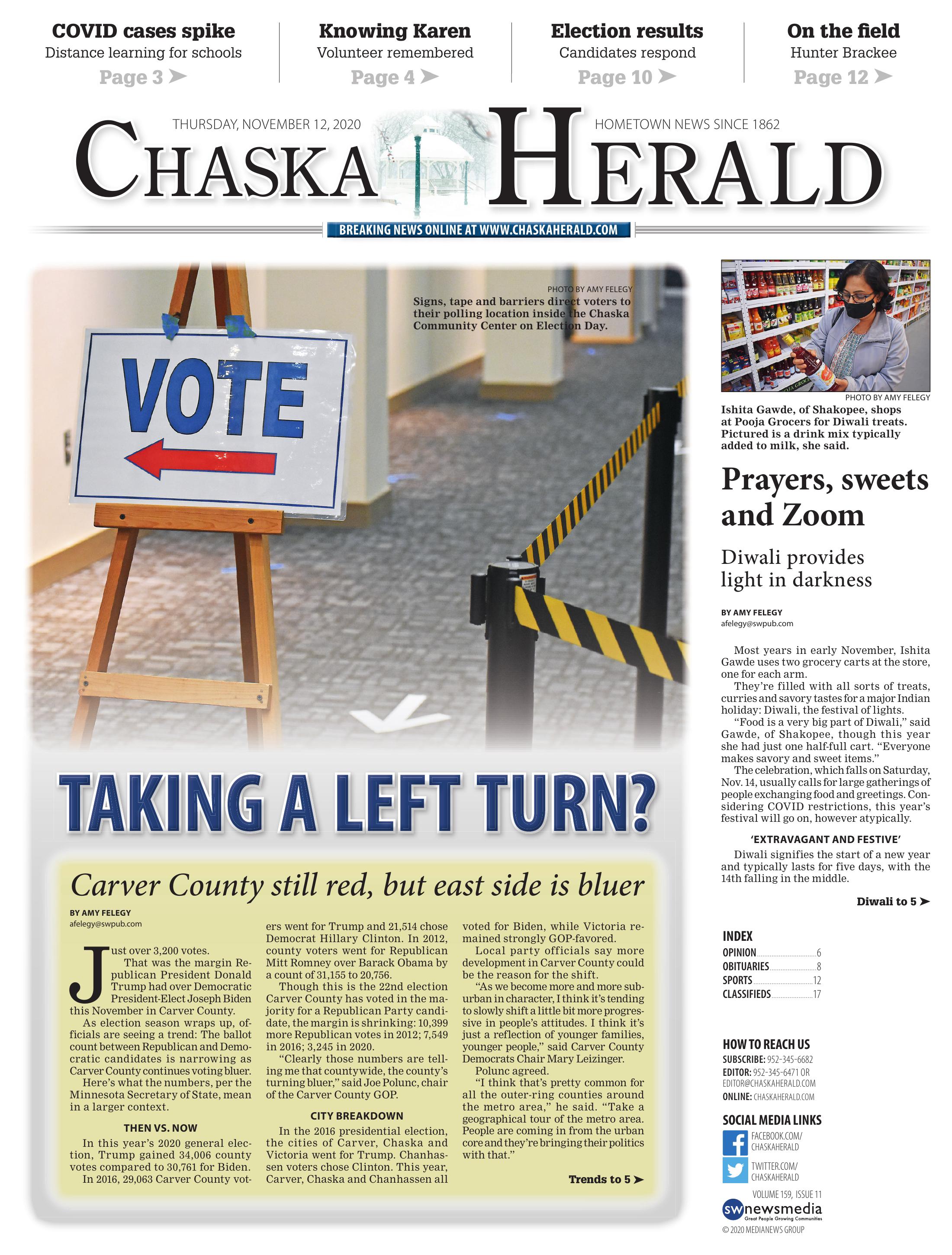 Signs, tape and barriers direct voters to their polling location inside the Chaska Community Center on Election Day.

That was the margin Republican President Donald Trump had over Democratic President-Elect Joseph Biden this November in Carver County.

As election season wraps up, officials are seeing a trend: The ballot count between Republican and Democratic candidates is narrowing as Carver County continues voting bluer.

Here’s what the numbers, per the Minnesota Secretary of State, mean in a larger context.

“Clearly those numbers are telling me that countywide, the county's turning bluer,” said Joe Polunc, chair of the Carver County GOP.

Local party officials say more development in Carver County could be the reason for the shift.

“I think that’s pretty common for all the outer-ring counties around the metro area,” he said. “Take a geographical tour of the metro area. People are coming in from the urban core and they’re bringing their politics with that.”

City of Carver voters went for Biden over Trump this year, 1,568 versus 1,460. The last time Carver voted for a Democratic presidential candidate was in 1992.

“I think given the smallness of that community and then given percentage of growth in terms of new housing … That impact was much more strongly felt in Carver,” Leizinger said.

All four of Chaska’s wards went for Biden this year; the last time the city chose a Democratic presidential candidate was in 1996.

All three of Victoria’s precincts went for Trump. Victoria voters haven’t gone for a Democratic presidential candidate since 1964.

Chanhassen remained blue this year, with all precincts voting in the majority for Biden.

However, while eastern Carver County towns moved to the left for presidential candidates, they continue to mostly (albeit sometimes narrowly) lean right for U.S. Congressional races, as well as State legislative races in Senate District 47 and House districts 47A and 47B.

Meanwhile, the portion of Chanhassen represented by State Senate District 33 and State Representative District 33B favored DFL candidates Gretchen Piper and Kelly Morrison by 2.1 and 3.4%, respectively.

“That’s been going on for quite some time, but this year seems to be a little more abrupt than I would have thought,” he said. “It was surprising but I just didn’t know what to expect.”

Since it's a Census year, congressional redistricting could alter which senate districts cities fall into in the next election.

Both local leaders said their parties handled COVID appropriately this year — Leizinger said her party was “responsible” in campaigning this year; Polunc said the local GOP did a “fairly incredible job,” but said there’s always room for improvement.

On a larger scale, Polunc said the GOP party landed on a positive note this year.

“In general, nothing really changed with respect to who is in various positions in the House or Senate. That’s, for our purposes, a success,” he said. “Carver County only has so much influence in some of those statewide races, because they cover other parts of the metro area. Our influence is limited.”

Leizinger said despite Eastern Carver County mostly favoring Biden this year, local results weren’t as strongly Democratic as her party would like to see.

“I think it’s encouraging. I would have liked us to do a little bit better but I was also encouraged that a very large chunk of the electorate in Carver County agreed with the state of Minnesota,” Leizinger said. “I was gratified and happy to see us making a contribution for that. Every vote makes contributions for the whole.”

Ishita Gawde, of Shakopee, shops at Pooja Grocers for Diwali treats. Pictured is a drink mix typically added to milk, she said.

Sanjeev Gawde picks up a tray of sweets typically eaten during Diwali, the Indian festival of lights.

Loved ones gather to set off fireworks on the night of Diwali in a previous year.

Most years in early November, Ishita Gawde uses two grocery carts at the store, one for each arm.

They’re filled with all sorts of treats, curries and savory tastes for a major Indian holiday: Diwali, the festival of lights.

“Food is a very big part of Diwali,” said Gawde, of Shakopee, though this year she had just one half-full cart. “Everyone makes savory and sweet items.”

The celebration, which falls on Saturday, Nov. 14, usually calls for large gatherings of people exchanging food and greetings. Considering COVID restrictions, this year’s festival will go on, however atypically.

Diwali signifies the start of a new year and typically lasts for five days, with the 14th falling in the middle.

Another big installment of Diwali? Fireworks, which are now banned in several Indian states due to respiratory risks associated with COVID.

In a typical year, big gatherings are also a part of the story. They include plenty of dancing and games, said Santosh Sharma with Shakopee’s Sur Aur Taal entertainment.

“It’s basically lavish and extravagant,” Sharma said, noting Sur Aur Taal’s Diwali events sometimes rack up to 700 people. “We usually get together and we meet and interact, sometimes in community halls or gymnasiums. This year none of the halls or the events are going to happen.”

On the bright side, Sharma said he won’t have to deal with a common accessory of Diwali after the parties.

“There’s an unbelievable number of dishes,” he said, laughing.

In Chaska, the Sri Saibaba Mandir prayer center is rolling a little differently as well.

President Tejnarayan Mucherla said staff there want to celebrate in a grand way, but they can only do so much considering the pandemic.

He’ll invite some temple-goers to celebrate, offering smaller-scale and socially-distant options in person.

“Nobody expected COVID to come and hit so badly, but we are doing our part to embrace the community,” Mucherla said.

This year, Sharma is hosting all of this online via video streaming, something he calls “an unbelievable concept.”

“It will not be as extravagant and festive as it usually is. It will be on the low scale,” he said.

For some, that simplicity is just what they crave.

Chanhassen resident Shambavi Gupta said Diwali parties, usually celebrated the weekend before or after the holiday, have become “so massive.”

She said in the past three or four years, there’s just no time to breathe during Diwali. Everyone’s running from party to party, throwing money at attire, food, drinks and home improvement, she said.

Gupta would get together with 50-some women, dyeing henna designs and sharing food.

“Honestly, it wasn’t fun,” she said. “The purity and the family and the feel of the festival has completely vanished.”

This year, Gupta and a close friend — just one — got together. They sat. They chatted. They prayed.

“I loved it,” she said. “It was a very wholesome feeling. It wasn’t a mad rush of any kind.”

She said maybe COVID will encourage people to go back to their roots; to how their parents and grandparents celebrated Diwali, by reflecting and slowing down.

The Gawde family is staying home this year, too. Maybe they’ll host a Zoom meeting with family back in India or visit a nearby friend’s driveway to shoot fireworks. They’ll make sweets like usual, but only some. It’s just family this time, not a mass of people.

“We say, ‘OK, goodness is winning over evil,’” Gawde said. “We go from darkness to light.”