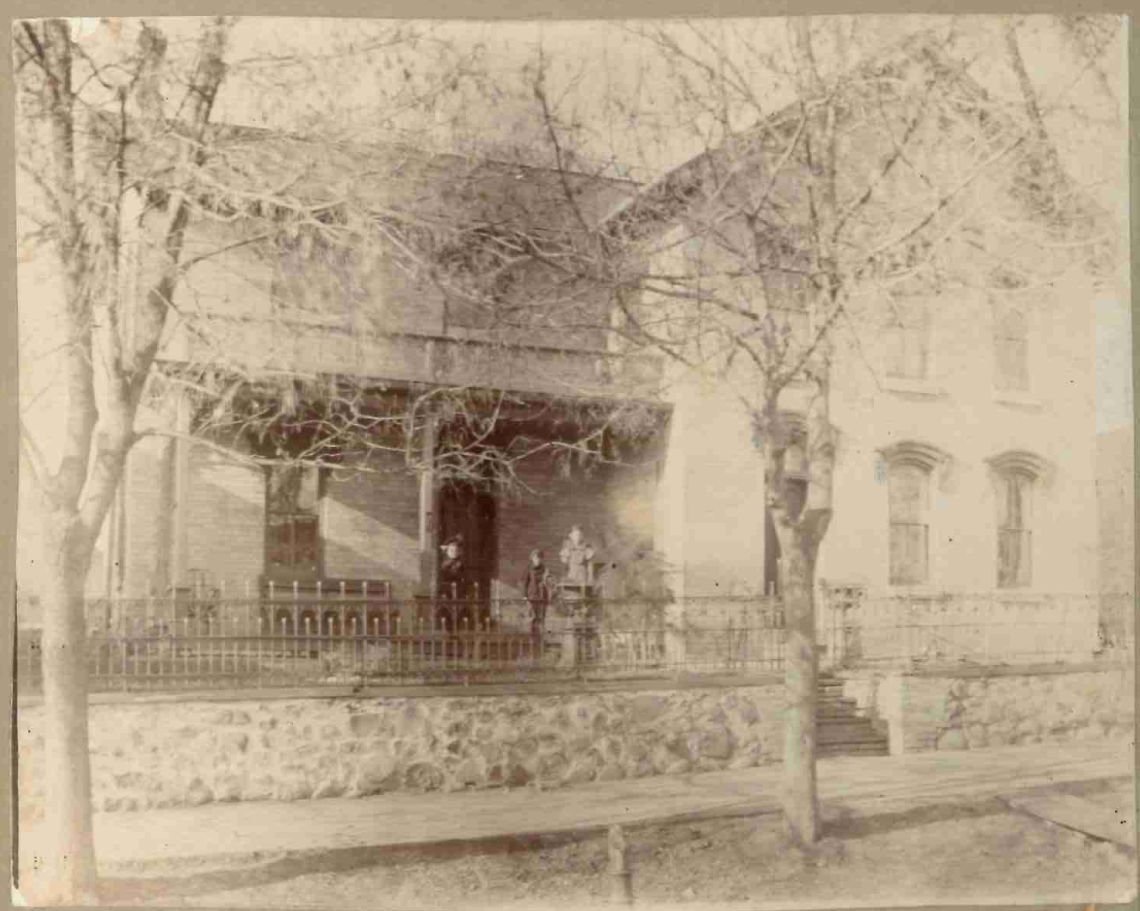 The Ess House in 1895 had a statue of a horse head outside of the home used for tying up horses. 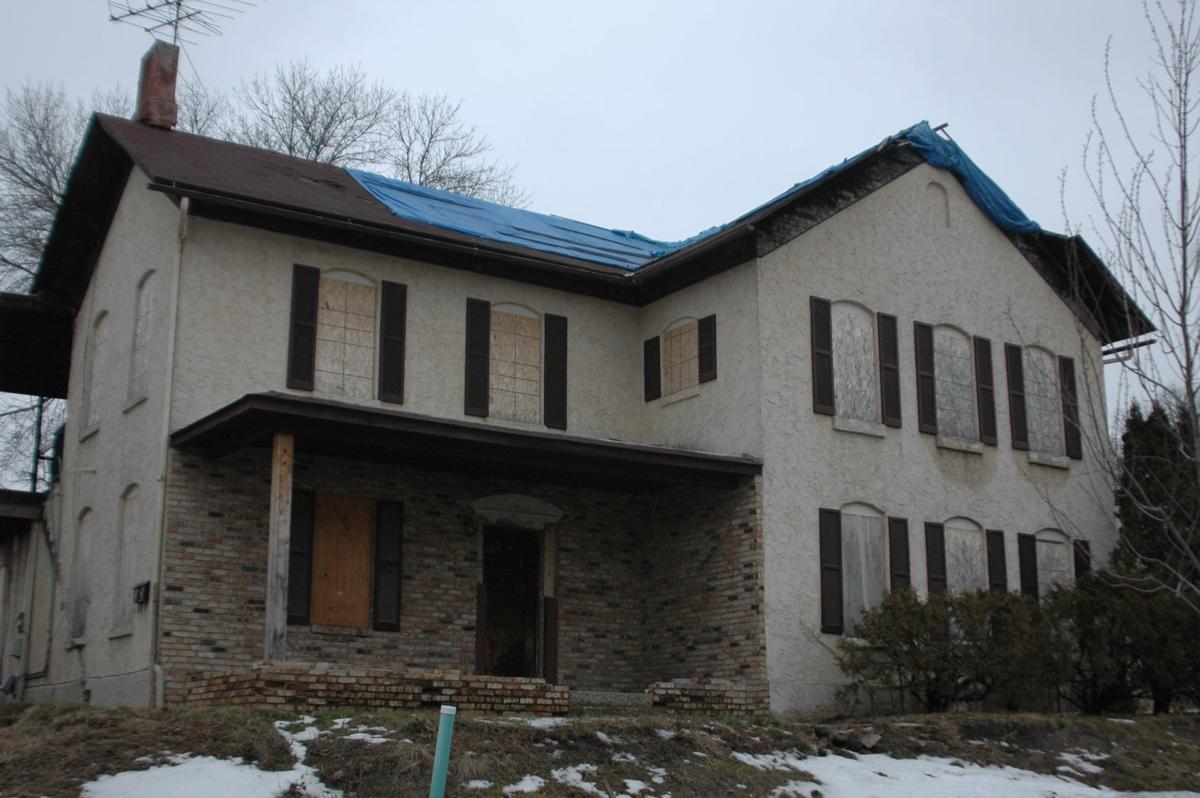 The Ess House caught on fire in 2014 and stands with boarded windows and blue tarps covering holes in the roof.

Mary Kay Feltmann lived in the Ess House until she was 19 years old. 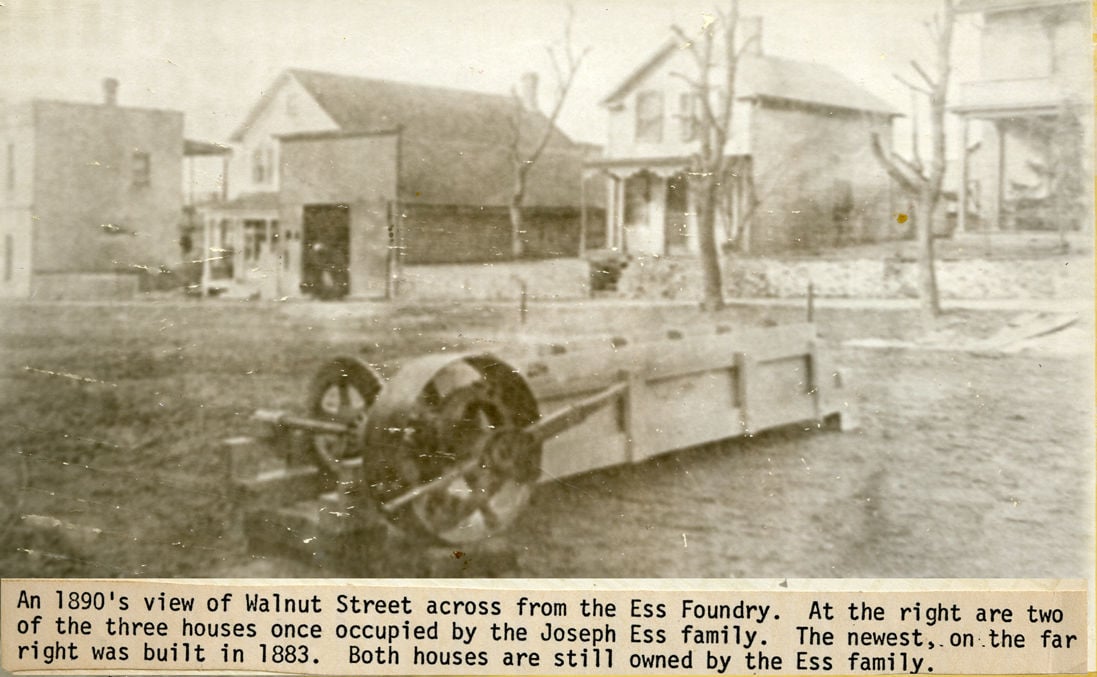 The Ess House was located across from the foundry at the far right of the photo. The other two homes pictured to the left of it were also occupied by the Ess family and have since been demolished. 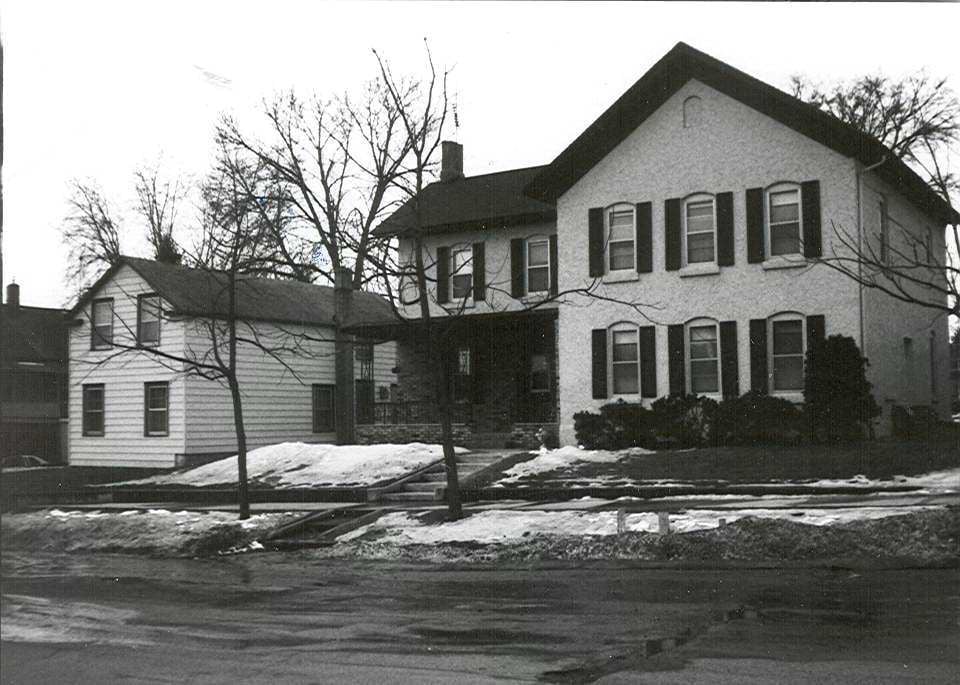 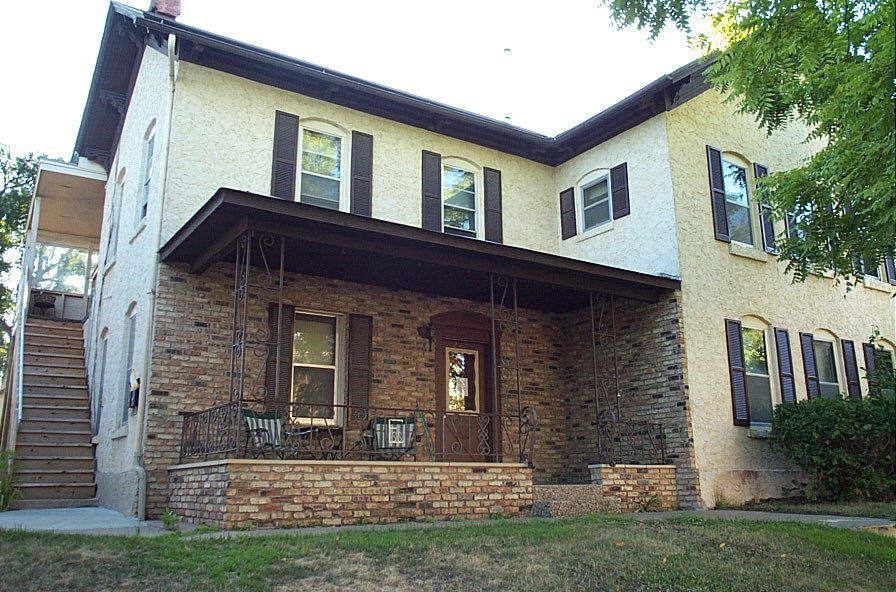 The historic house was rented from around 2007 until a fire burned through the home in 2014.

The Ess House in 1895 had a statue of a horse head outside of the home used for tying up horses.

The Ess House caught on fire in 2014 and stands with boarded windows and blue tarps covering holes in the roof.

Mary Kay Feltmann lived in the Ess House until she was 19 years old.

The Ess House was located across from the foundry at the far right of the photo. The other two homes pictured to the left of it were also occupied by the Ess family and have since been demolished.

The historic house was rented from around 2007 until a fire burned through the home in 2014.

The 131-year-old Joseph Ess House at 217 Walnut Street is one of the city’s oldest buildings.

However, the building is now facing demolition in late February or March after a grant application was rejected by the State Historic Preservation Office in 2015, and later in 2016 when the city applied again.

The funds would have repaired the home after it was severely damaged from a December 2014 fire that displaced nine residents. The structure stands with gaping holes in the roof, covered with blue tarps, burn marks and broken windows.

The estimated cost to restore the building is $800,000 and to tear it down and replace it is $650,000, said Doris Coghill, the home’s former owner, who sold it to the city for $1 after the fire, in hopes that officials could find state and federal funding to help pay for the repairs. The home is one of 57 historic properties recognized by the city.

For Feltmann, the home brings back memories of a neighborhood centered on casting metal.

Joseph Ess began making wagons in Chaska in 1866. The business evolved into Ess Brothers and Sons foundry, located at the southeast corner of East Third and North Walnut streets, just across the street from the home that Joseph Ess built in 1886. Feltmann remembered her hardworking father, Wally Ess, putting in long hours as a bookkeeper in the foundry.

While the home remains, for now, the Chaska foundry closed in 1972 and was later demolished. The foundry site now holds a three-story apartment building, not owned by the Ess family. Today Ess Brothers and Sons is located in Loretto.

Feltmann’s parents, Wally and Lillian Ess, bought the house for $3,000 in 1947. When Wally brought his wife to the house, she cried, Feltmann said. The home didn’t have running water and there was an outhouse.

“I don’t remember much of when this happened, but dad promised mother ‘Don’t worry I will fix it’ and he did and it was beautiful,” Feltmann recalled.

The home was originally a two-story family house with a partial basement with walls that were made out of boulders cemented together. The kitchen was in the front of the house where there was a water pump.

According to Coghill, who grew up in various houses on Walnut Street, Wally built an addition to the home and expanded the basement to the entirety of the house. He moved the kitchen to the back of the house and converted the second floor into an apartment that would be used by one of the Ess Foundry workers and his family.

“In the mid-1950s, the upstairs family moved out and Wally took out the stairway and closed off the outside door and made the room into a bedroom. He also converted the upstairs into two apartments with a covered porch and added stairway access on the south side of the house,” Coghill stated.

It is purportedly the only house in downtown where the rain from the gutters goes underground to the street.

There were two phones in the Ess household, one for the family and one for the Chaska Fire Department, since Wally was a volunteer fireman and the fire chief for a number of years. The station was located beside their backyard on Third Street, in the structure that now is the Von Hanson’s Meats building.

When someone called because of an emergency, Lillian would push a button that would activate the department’s siren.

“Most of the people that were firemen worked in downtown, so when the siren went off people came running from two or three blocks away,” Coghill said. “A good number of the workers at the Ess Foundry were firemen.”

Feltmann grew up in the home with her older brother, Tommy, and younger siblings Paul and Cindy.

Feltmann remembered playing in the backyard with Tommy, in the washtub when they were young, and then baseball when they were a bit older. “We never broke any windows playing baseball,” she said.

Later, Wally installed a hoop on the garage and they would play basketball.

Feltmann will always remember the warmth in the household.”All the love that went through the house, mother and dad were fabulous parents and are greatly missed,” she said.

Feltmann moved out as a 19 year old after marrying. Her parents continued to live in the home. Lillian passed away in 1991 and Wally lived in the home until around 2005 when he was 86 years old.

When he passed away in 2007, the children decided to sell the home to Coghill.

After the fire, the city acquired the property. Officials believed repairs would cost around $400,000 and that they would be able to sell it for $200,000. If awarded the grant, officials predicted they would be allocated $200,000 for the home.

“I was very sad after the fire,” Feltmann said. “We thought the city could buy it and restore it and that wasn’t possible.”

“It was like oh (shoot),” Coghill recalled of the fire. Coghill learned of the fire as it was happening. “I got out there before they put it out,” she said.

Except for the masonry, just about everything else needed to be replaced in the home, said City Planner Elizabeth Hanson. That’s what makes fixing it so expensive.

Generally the city has to balance keeping historical features, while staying in budget, she added. Typically, owners find that older homes have big expenses such as replacing roofs and windows to help better insulate the homes.

“The Ess House was unique in itself because of the fire and the financial burden,” Hanson said, adding that the city maybe able to salvage the building’s brick.

In March 2015, the city demolished two historic wood-frame homes on Walnut Street, built in 1865 and 1880 and located next to the Ess House.

The city used part of the space where the two homes sat for a downtown parking lot. The rest of the newly vacant space was used as a new location for the 130-year-old brick Riedele/Ernst House, which was moved from its location along County Road 61 to make room for the Firemen’s Park redevelopment project.

“Our best bet is if we marketed the properties together,” Podhradsky said in a November City Council meeting, of the relocated Riedele/Ernst House and Ess House land. He added that the two lots could serve as residential or office space or both.

“There’s no specific plans right now,” Hanson said. “We would guide the redevelopment to fit into the historical context of the area.”

“It’s too bad that the Ess houses are being demolished,” Feltmann said, after explaining that many of the family’s homes are no longer standing. “But that’s part of history and time goes on.”