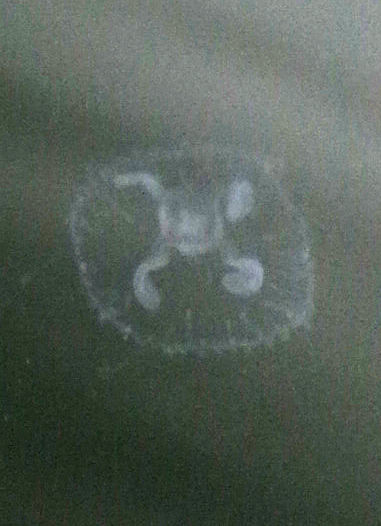 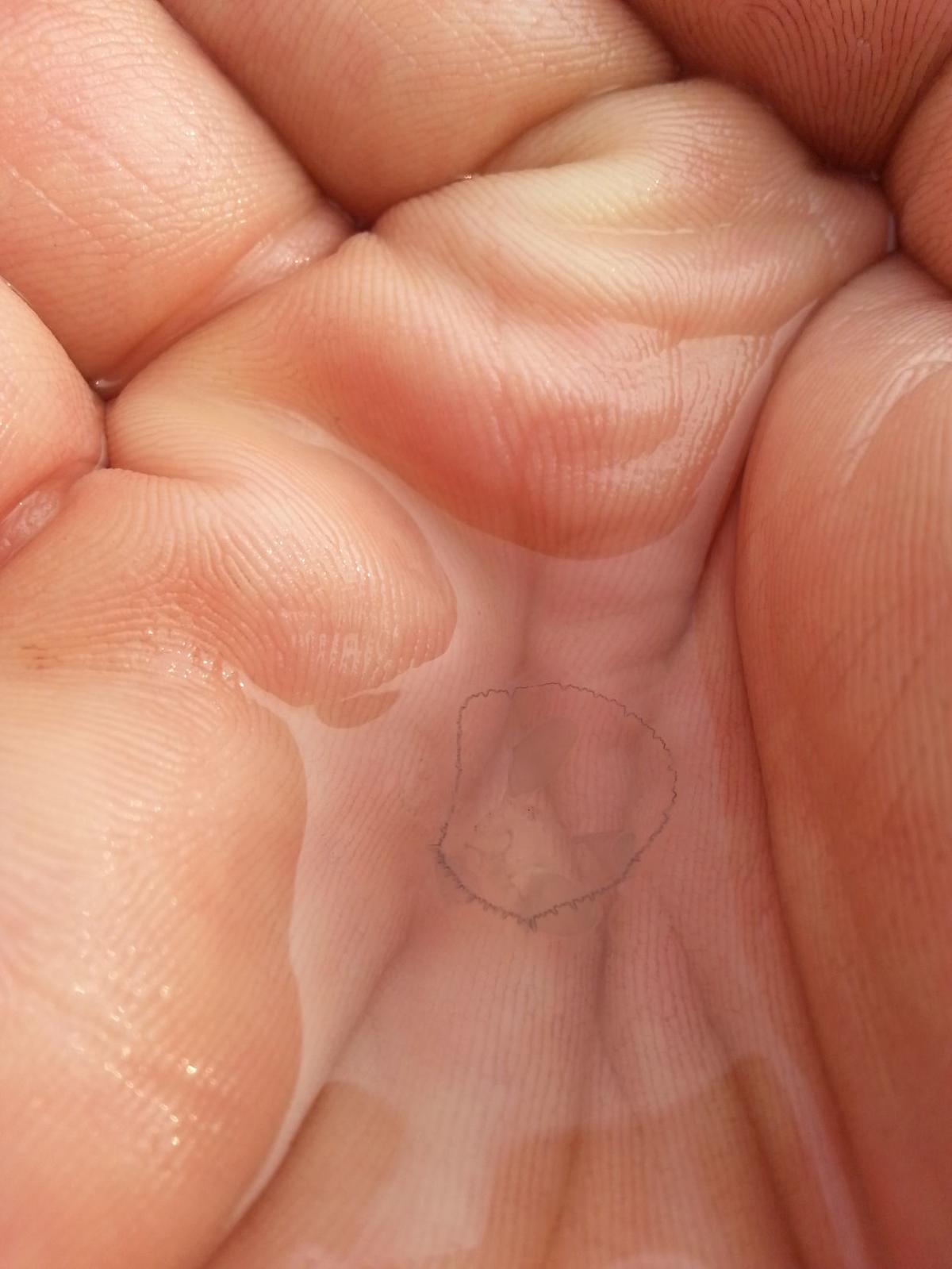 The jellyfish felt slimy, gelatinous and did not sting, reported Mike Toninato. 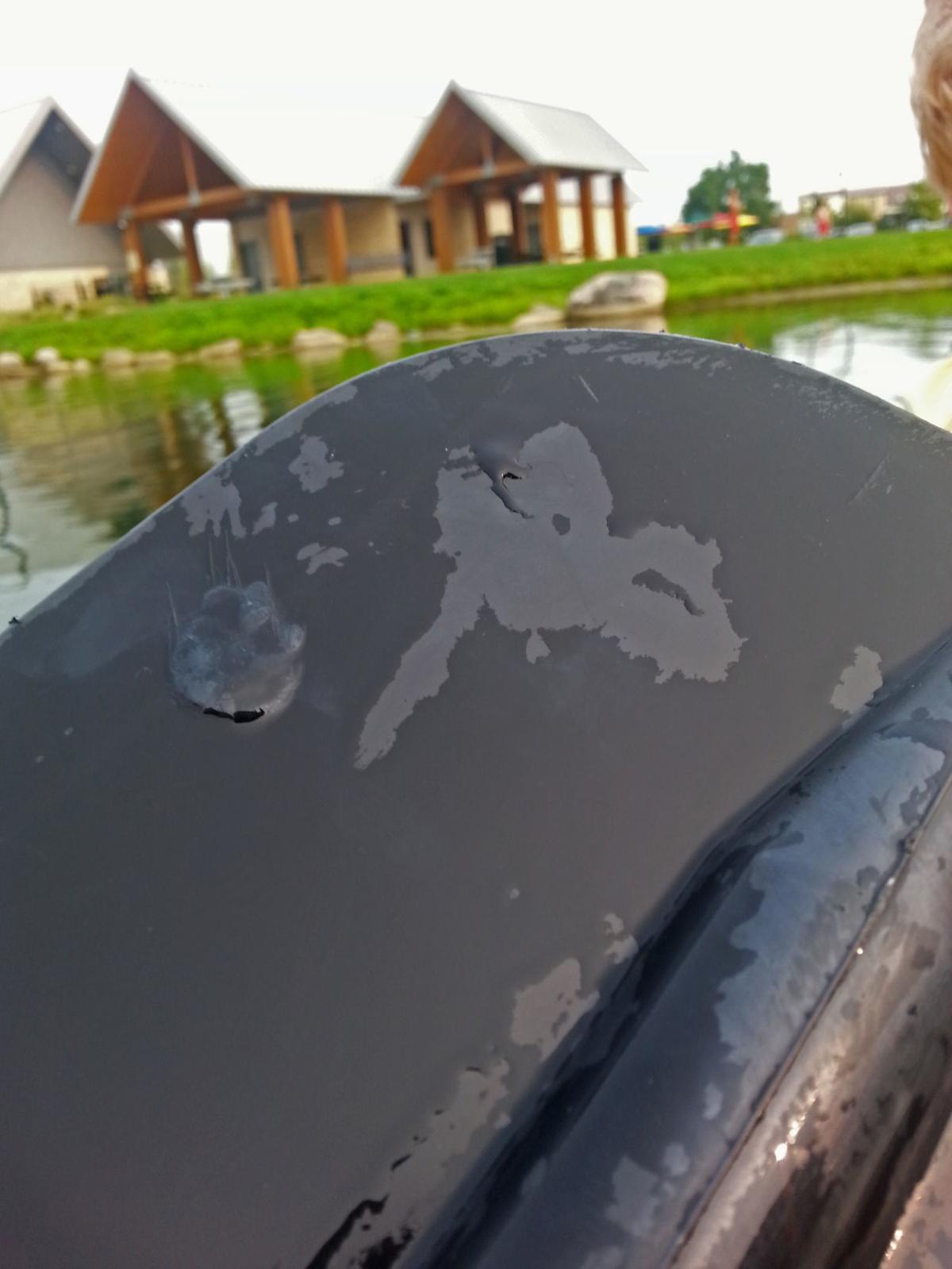 Chaska resident Mike Toninato first took one of the jellyfish on his oar. 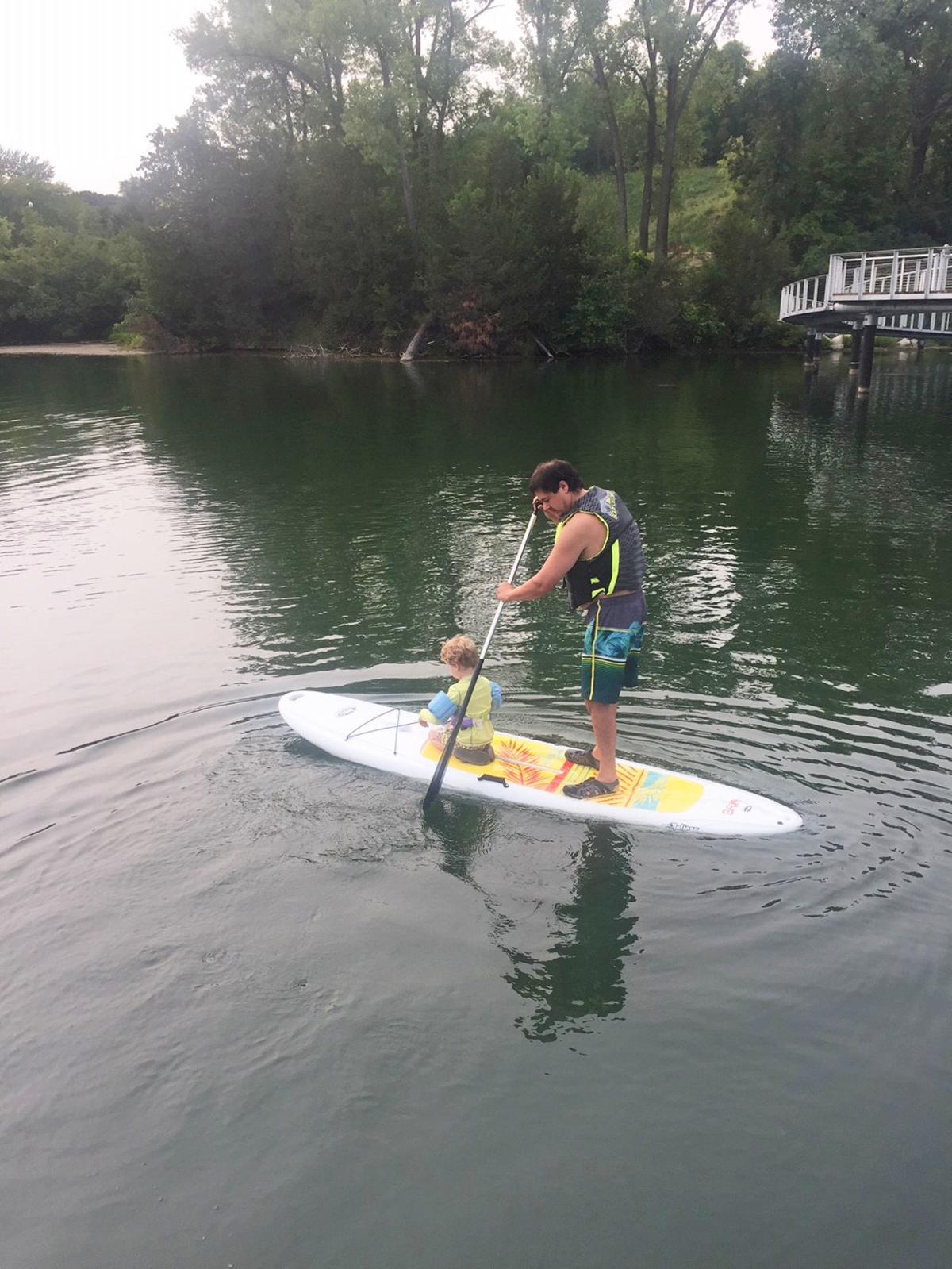 Chaska father Mike and son Colin Toninato took to Firemen’s Clayhole in search of freshwater jellyfish the day after they first found them.

The jellyfish felt slimy, gelatinous and did not sting, reported Mike Toninato.

Chaska resident Mike Toninato first took one of the jellyfish on his oar.

Chaska father Mike and son Colin Toninato took to Firemen’s Clayhole in search of freshwater jellyfish the day after they first found them.

Mike Toninato was paddleboarding on Firemen’s Clayhole in downtown Chaska, adjacent to Firemen’s Park, when he spotted tiny, translucent creatures with small tentacles in the water.

It was Aug. 16 and the hot weather called for some fun in the water. Chaska residents Mike and son Colin Toninato, 5, thought the small animals looked like tiny umbrellas.

“He looked down and said ‘Dad what’s that?’ And we sat there for five to 10 minutes thinking about it … not knowing truly what it was,” Mike recalled. That night the Chaska father sat up researching, looking for what they saw on the internet, after putting Colin to sleep at 7 p.m.

He stumbled upon reports and articles of freshwater jellyfish.

“After seeing that they were rare to see in Minnesota, that’s when we decided to go back the next day,” he said. Mike placed his smartphone in two bags and ventured back out. Dad paddling, and son tasked with looking for the squishy invertebrates.

There were more jellyfish than the day before, Mike said, noting they were everywhere from the beach to the boardwalk in the middle of the lake. The white creatures had small tentacles and were about the size of a nickel, though some were even bigger.

They looked like they were bobbing in the water.

“It was fascinating to watch them,” he said. “The only place I’d ever seen them before were in an aquarium – never in nature.”

Mike didn’t capture any of the jellyfish, since the Department of Natural Resources has rules against taking animals out of their environments, he said. However, Mike did put one in his hand.

The jellyfish didn’t sting and felt slimy and gelatinous, he reported.

The DNR does not keep records of sightings, according to Gary Montz, an aquatic invertebrate research scientist.

Freshwater jellyfish, scientifically known as craspedacusta sowerbyi, are native to the Yangtze River in China, according to the U.S. Geological Survey website. It was first documented in the United States in 1880, and since has been seen in 44 states and the District of Columbia.

“Minnesota appears to have around a dozen different waters with this reported from, but this could be an underestimate, as often the reports don’t get high visibility,” he stated in an email. “So we may have more lakes with this animal in it.”

If someone sees freshwater jellyfish, Montz encourages them to give the DNR an email. They don’t hurt people or animals in the water, so there’s no need for concern.

“What to do when you see them? Not a whole lot – take some pictures to show your kids and friends, send us an email so we are aware of another water in the state, and enjoy this really neat animal that we seldom see or encounter,” he said, in the email. Generally in Minnesota, people spot them in late summer.

Freshwater jellyfish start as larvae and later metamorphosize into a polyp that lives on the bottom of a body of water, according to the U.S. Geological Survey website. Polyps camouflage themselves by secreting a sticky mucous that sticks particles to their body. The polyps are capable of producing jellyfish – called blooms. However, the cause of the blooms is not known. The jellyfish eat small organisms.

It may be years between blooms, which are thought to perhaps be caused by temperature, alkalinity and calcium carbonate, according to the website.

“Polyps overwinter by contracting into resting bodies called podocysts, which are essentially dormant cellular balls surrounded by a protective chitin-like membrane that allows them to withstand more extreme conditions than the active forms,” according to the U.S. Geological Survey.

Mike and Colin hope they are able to see the mysterious jellyfish again.

“I’ve been to quite a few lakes and I’d never see them ever,” Mike said. “I think it’s a once-in-a-lifetime deal.”