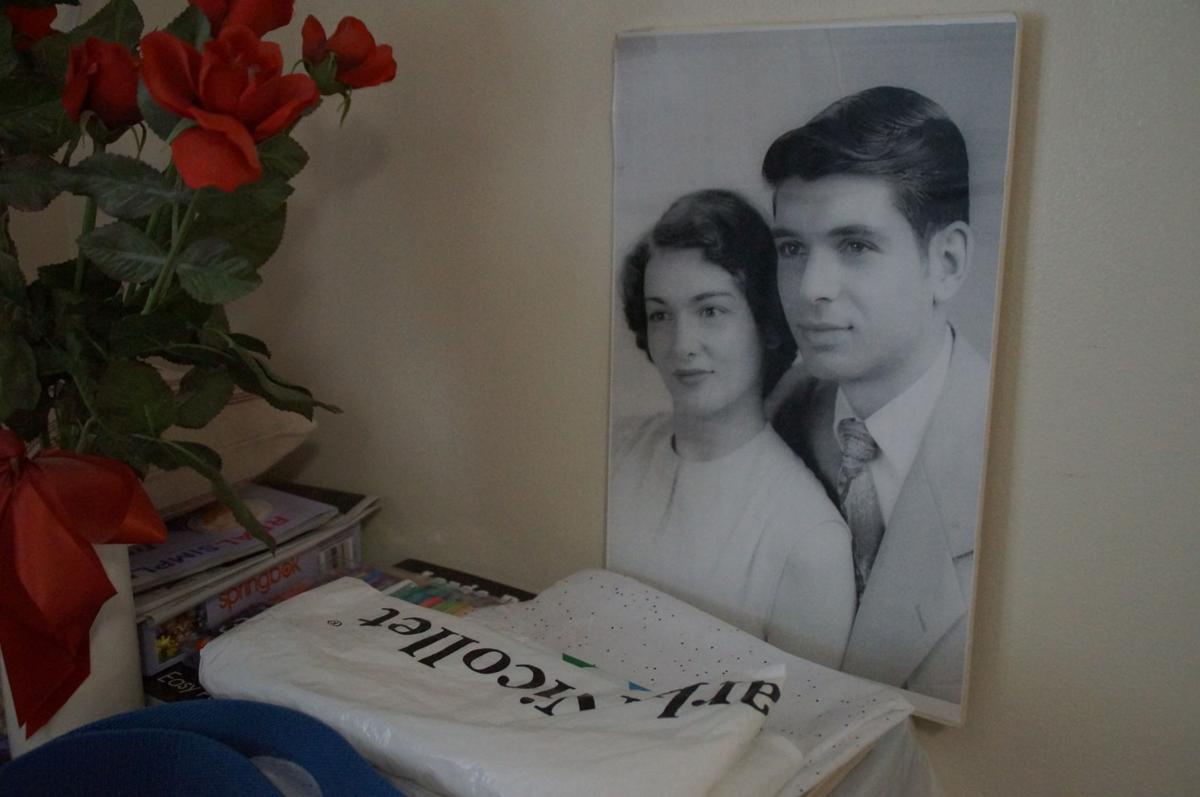 A table in Donna Farmer’s room at Friendship Manor is decorated with fake roses and an old photo of Donna and Gordy Farmer. Gordy brought the decorations to celebrate the couple’s 72nd wedding anniversary. The roses are fake, he said, and he’s taken them out every year on their anniversary. “That way we don’t need to spend money on new flowers,” he said, laughing. 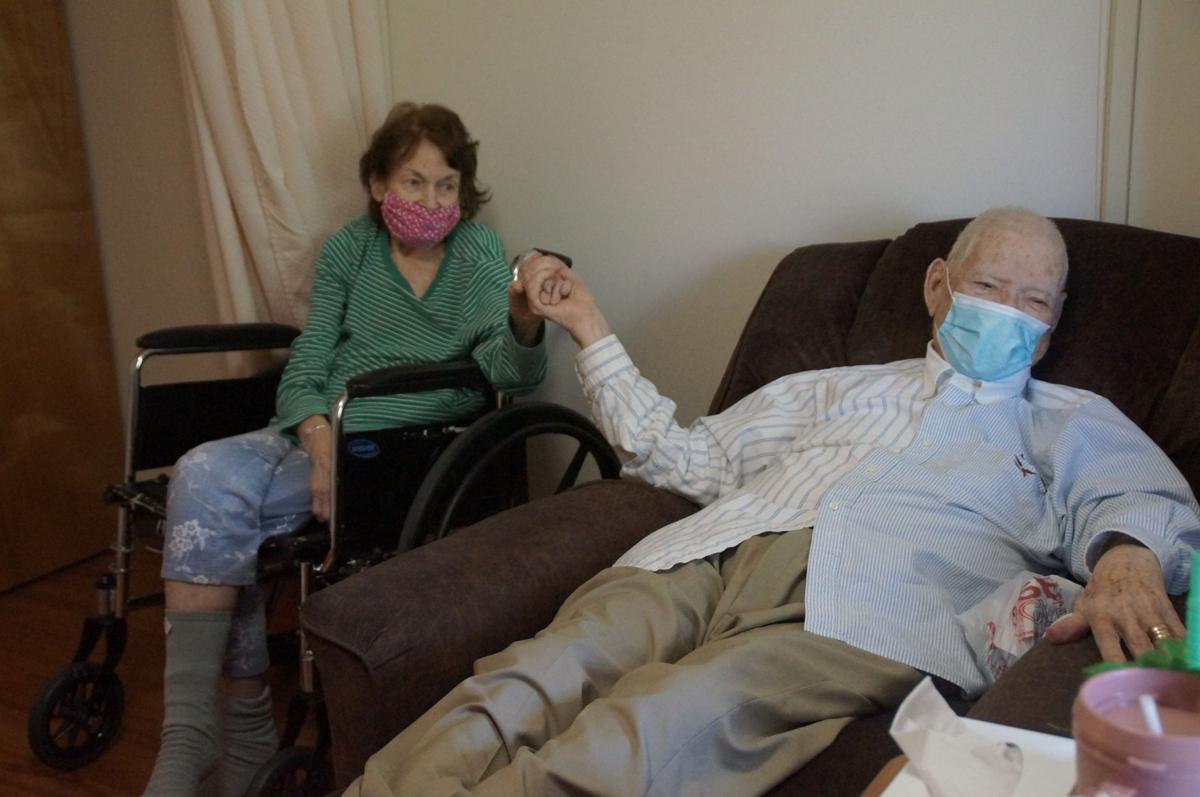 Donna and Gordy Farmer, who have been married for 72 years, sit next to each other all day, every day, at Shakopee’s Friendship Manor. Gordy doesn’t live there, but he said “there’s no place I’d rather be.”

A table in Donna Farmer’s room at Friendship Manor is decorated with fake roses and an old photo of Donna and Gordy Farmer. Gordy brought the decorations to celebrate the couple’s 72nd wedding anniversary. The roses are fake, he said, and he’s taken them out every year on their anniversary. “That way we don’t need to spend money on new flowers,” he said, laughing.

Donna and Gordy Farmer, who have been married for 72 years, sit next to each other all day, every day, at Shakopee’s Friendship Manor. Gordy doesn’t live there, but he said “there’s no place I’d rather be.”

Donna and Gordy Farmer sat side-by-side in Donna’s room at a Shakopee residential center — Donna, 90, sits in a wheelchair and Gordy, 93, sits tipped back in a beige recliner sofa. Gordy reached to his right to hold his wife’s hand.

Sitting and holding hands is pretty much all they do nowadays, Gordy said, ever since his wife of 72 years, who suffers from dementia, broke her hip and checked into Friendship Manor in Shakopee on March 19, 2020.

Since then, Gordy has visited Donna every day except one, and he sits in that same beige recliner sofa for seven hours. Gordy can barely feel his feet and, although people tell him he doesn’t look 93, he says, “I sure feel like it.” But he said his mind still works “a little bit.”

In the corner of the room, a bouquet of roses adorns a small table, along with a black-and-white photo of Donna and Gordy from when they were 40 years old. The roses are fake, Gordy said. They’ve kept them in hiding all these years, and he pulls them out for special occasions such as this one: their 72nd wedding anniversary.

‘Only one place to be’

Gordy, who lives in Chaska, looked at Donna with inquisitive eyes, searching for scraps of memories she might have from their early years of marriage. But for the most part, she stayed silent, seemingly enjoying the stories Gordy recalled, as if she were hearing all of them for the first time.

“People say I’m crazy for spending all day, every day here,” Gordy said. “But there’s only one place to be and that’s to be with my wonderful sweetheart, Donna.”

Gordy says things how they are. When a nurse walked into the room, she told Gordy he needed to keep his mask on while he talked.

“Those are the rules, honey,” the nurse said.

“That’s actually ridiculous,” Gordy said, scoffing as he just barely covered his mouth with the mask.

When the nurse came back a few minutes later to check on Donna, Gordy gestured toward her and said, “the people working here are the finest people you’ll ever meet.” That’s because he says they take good care of his wife. He’d know — he’s there seven hours a day.

One time, in the middle of the interview, Gordy looked at Donna and said, “Oh, you’re so beautiful.”

Donna scoffed and shook her head.

“She gets mad when I say that. She gets embarrassed,” Gordy said, turning to his wife. “But you still like it, I think.”

“Why not? That’s the way I feel. Why shouldn’t I tell people how I feel?”

‘Never seen anybody so pretty’

Gordy said he was attending Southwest High School in Minneapolis when he noticed a “beautiful girl” one day in class.

“I said, my goodness, I’ve never seen anybody so pretty,” Gordy said. “And I asked a friend of mine, who is that? Well, she was a new student.”

Gordy said Donna had “lots of boyfriends” because she was so cute, but eventually they dated. Gordy joined the Air Force for 18 months in 1946. When he returned to Minnesota, they got married.

The Farmers married on April 13, 1948 at Gordy’s parents’ house in front of the fireplace, as rain poured down outside. Donna was 18 years old and Gordy was 21.

The only guests in attendance were their parents and two friends. They went to dinner together to celebrate, and then the newlyweds departed for their honeymoon to Stillwater, where they stayed at the Lowell Inn.

“We still remember how noisy the window shutters were at the Inn, because it was so windy and wet outside,” Gordy said, turning to Donna. “But we didn’t care, did we?”

Their first home together was a rental in Minneapolis that cost $30 per month and was “just a terrible place,” Gordy said. It was next door to a bakery and there were bugs everywhere.

They lived in several more places throughout their marriage, including an apartment across from Lake Harriet (the rent was $90 per month) and a place off 38th and Chicago, right where George Floyd was killed last year, Gordy said.

Later on in their marriage, the Farmers built a home of their own in Bloomington.

Gordy worked for AT&T, and Donna worked as a personal banker at Southdale Bank in Edina. When Gordy told Donna she’d worked there for 20 years, adding people there “loved her,” Donna’s eyes widened.

“Our family is so wonderful and they will help us and do things for us, and they just don’t have anything to quarrel about,” Donna said. “We just say how lucky we are, because our kids are so nice.”

“We had a marvelous life together,” Gordy said.

They loved going to the Excelsior Amusement Park, which was on Lake Minnetonka until 1973. Going to the Minnesota State Fair each year was also one of their favorite things to do. And they loved to travel. In retirement, they went to the Florida Keys, Texas, Las Vegas, the west coast, Hawaii, New York and the Carolinas.

The secret, Gordy said, was simple for them: put up with each other’s faults.

“We’re sort of two of a kind, I guess you would say. I’d put up with her, she’d put up with me,” Gordy said. “We did everything together. We loved each other so much, like we still do.”

Gordy added when the two of them argued, they always sat down and talked with each other, and by the time they went to bed they always kissed goodnight.

“We could have let it fester all night long, and get up in the morning and feel like we did before,” Gordy said. “But for some reason, that never happened.”

Donna nodded her head as her husband spoke.

Gordy said his advice for a lasting marriage is to “accept the bad sides, just like the good sides.”

In sickness and in health

When a nurse pulled Donna away from her room to finish eating dinner, Gordy became emotional.

“This has been so hard on me,” he said, adding he’s lost 50 pounds since Donna was diagnosed with dementia.

Donna was diagnosed with dementia in September 2019. Since then, her personality has changed drastically.

“Here she is, my wife Donna, but then here’s this other person, and the only way I can communicate with her is by trying to figure out her language and try to put my personality into her personality,” Gordy said.

That’s why, when he visits, they don’t speak very often.

“We hold each other real tight, and we tell each other we love each other,” Gordy said. “We do the best we can, don’t we, Donna?”