Across Carver County, silver strips of solar panels are popping up on farmland.

The permitting process behind a few of the community solar garden developments has been controversial, as the Board of Commissioners weighed property value impacts and stray voltage.

“I feel the major concern was the aesthetics, which I certainly understand,” said Board Chair Randy Maluchnik. “People buy property in rural Carver County to look at rural things, and they don’t have a perception that solar panel farms are rural.”

Misgivings were also raised for swaths of land being used to power subscribers in Carver County and its heavily populated neighbor, Hennepin County.

“In a sense, the farmers are farming the sun, as opposed to using sunlight to farm corn or beans,” he said. “In some cases, it’s the difference between making a profit on a farm for a year or not.”

The electricity harvested from solar gardens then goes to Xcel Energy. Xcel translates the kilowatt hours of electricity into bill credits for subscribers. Cities, schools, businesses and residences subscribe to third-party developments and receive their allotted bill credits from Xcel energy.

“So, our subscribers are receiving bill credits,” Richerson said, “and Xcel Energy is receiving solar energy.”

Zoning changes in the county may pump the brakes on further solar garden development, and leaders hope for a change in legislation to tamp the process. However, a needed variety of solar energy developments in coming years may incite continued growth in the county. 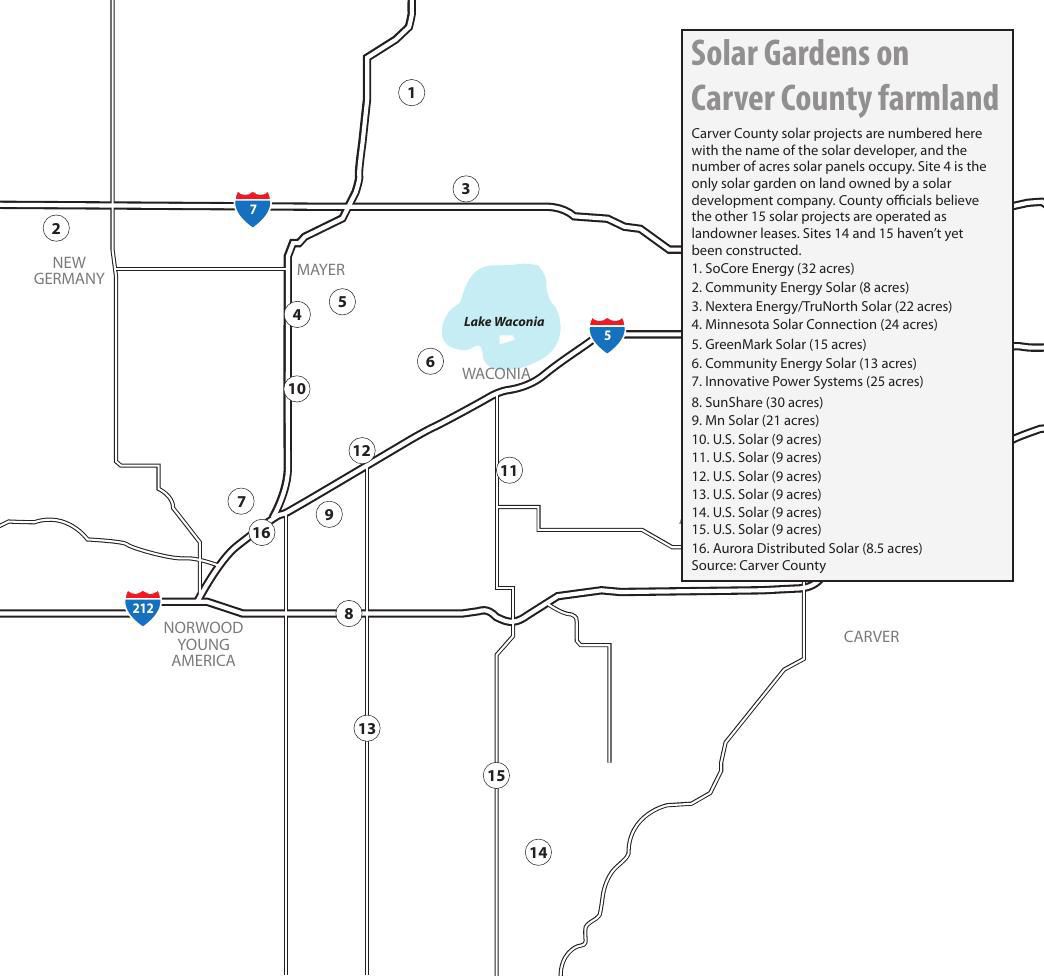 The Carver County Board of Commissioners denied two conditional-use permits for community solar garden projects over the last year, and the Minnesota Court of Appeals recently reversed both denials.

One of the proposed sites was a one-megawatt, 8- to 9-acre solar garden in Hancock Township. Solar developer U.S. Solar came before the board of commissioners three times to try for the permit, according to the court’s unpublished opinion.

Residents doubted the project at meetings, saying the potential glare from the panels could be hazardous. They showed photos of a screening prototype, meant to mimic the proposed screen. The screen height, they said, would not block the solar garden from sight.

One of the greater concerns residents and commissioners voiced was for the possibility of stray voltage — when an electrical current passes through an object unintended to conduct electricity. A dairy farm was 700 feet from the first planned site, and 1,000 feet from the modified, second proposal. Some believe the stray voltage could pass through the cows hooves.

“In Carver County, we’ve had a pretty prominent history of stray voltage causing major damage to dairy farms,” Maluchnik said, “with dairy farmers not being able to ever recover from that, financially.”

The expert said other, more common projects have a higher likelihood of introducing stray voltage, such as pole barns, residential developments and dairy operations. The board rejected the permit application unanimously, and at the third hearing, a modified application was also rejected.

“The board of commissioners has done a very good job considering all aspects,” Richerson said, “like the emotional aspects, the factual aspects and the people aspects.”

The court of appeals said in the unpublished opinion that the county’s choice to deny the permit due to stray voltage was “arbitrary, capricious and unreasonable.” The opinion also said there was no concrete evidence showing solar panels have an effect on property value.

After seeing court documents, Maluchnik said he gained confidence stray voltage wouldn’t be an issue with the proposed solar garden.

The board of commissioners issued the permit to U.S. Solar on June 4, and construction on the Hancock Township project is anticipated to begin this fall. The one-megawatt sized project will feed energy to 200-225 single-family homes each year.

“I’d like to say I have a great deal of respect for the people that worked in opposition to the solar farms,” Maluchnik said. “We certainly did our very best to listen (…) but again, we still have to follow the law.”

While stray voltage may have peppered the talking points surrounding the Hancock Township proposal, the county board recently backed legislation for what it says is the root of the issue with solar gardens in Carver County.

The Community Solar Garden statute was passed in 2013, within Xcel Energy service’s territory, with the goal of upping third-party solar program development. One of the stipulations in the legislation is a clause limiting solar garden development to sites in the same, or neighboring, county to the development’s subscribers.

Board members said the neighboring county wording has turned Carver County into a wellspring for solar garden development, to feed its more populated neighbor: Hennepin County.

On May 7, the board passed a resolution 4-1 supporting the removal of that wording during the 2019 legislative session. The resolution says Carver County has experienced “among the highest” level of community solar garden permits and construction in the state.

At the state Capitol, the provision was included in a global package of reforms to the Community Solar Garden statutes, said Sen. David Osmek R-Mound. But, it didn't make it.

“Unfortunately, the DFL-led House refused to consider the common-sense reforms that had huge bipartisan support in the Senate,” Osmek said in an email. “The reforms that the Senate had were critical to allowing the expansion beyond the existing footprint for the program.”

Maluchnik said he believes the provision will return to the table next year.

Powering the more populated counties in Minnesota isn’t an issue of only using community solar gardens, or only using rooftop solar, says Beth Soholt, the executive director at Clean Grid Alliance, a nonprofit and lobbying group.

It's an issue of meeting Xcel Energy’s Integrated Resource Plan, which requires more solar energy in the 2020s, she said. Doing so will ask for a combination of rooftop solar, community solar gardens and utility-scale solar (which are atypical in first-ring suburbs).

“So solar gardens will be a part of that,” Soholt said. “And then they’re looking at other resources to help fill the need, but over the next year, there will be a debate that will proceed at the public utilities commission to decide how Xcel should fill that need.”

There are five community solar gardens, worth one megawatt of energy apiece, in the design or construction phases in Carver County, an Xcel Energy spokesperson said.

Yet, Maluchnik and Richerson said they anticipate a lull in solar garden developments in Carver County. This is due in part to a change in county zoning on renewable energy, dictating solar energy systems have to be more than 500 feet from neighboring residences, and 1 mile away from other large solar energy developments.

“I think over time, enough folks will want to host solar, that maybe those ordinances will have to change again to allow it,” Richerson said. “I think Carver County will probably experience a break in the action.”