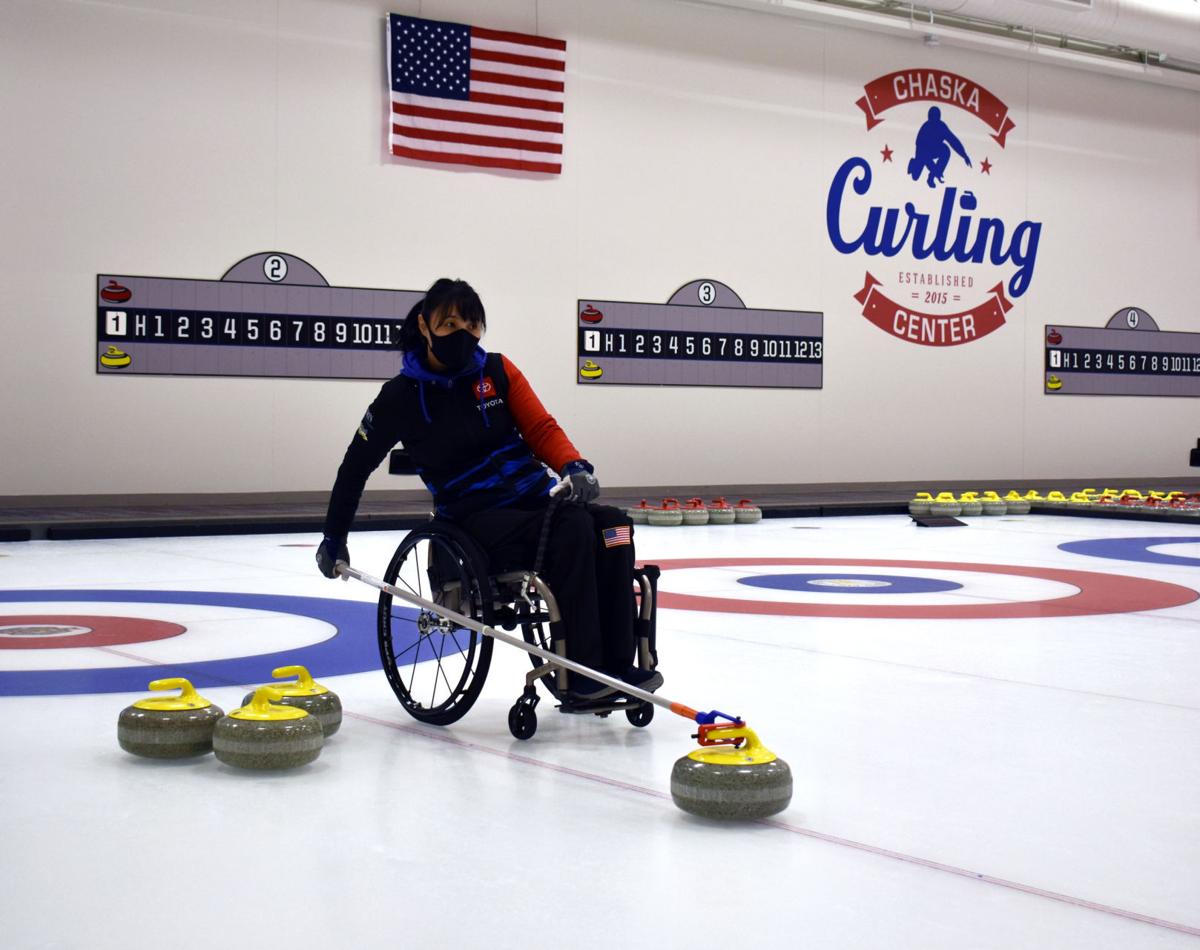 Batoyun Uranchimeg, on the U.S. National Wheelchair Curling Team, gets her first practice in at the Chaska Curling Center on Monday. 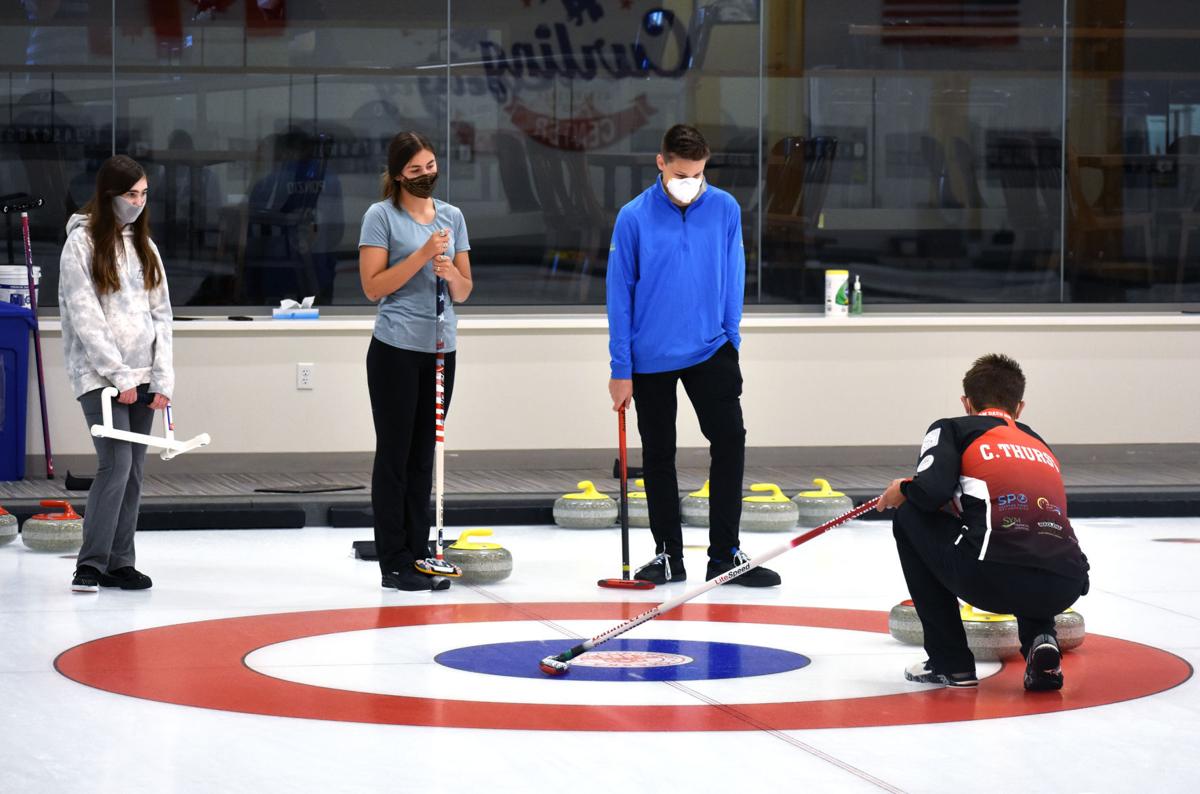 Alyssa Hahn, Kenna Ponzio, Kyan Ponzio and Coleman Thurston set up for their first practice back at the Chaska Curling Center. They hail from different clubs, but practice together regularly.

Batoyun Uranchimeg, on the U.S. National Wheelchair Curling Team, gets her first practice in at the Chaska Curling Center on Monday.

Alyssa Hahn, Kenna Ponzio, Kyan Ponzio and Coleman Thurston set up for their first practice back at the Chaska Curling Center. They hail from different clubs, but practice together regularly.

It’s confirmed by shuffling sounds on the ice, bags of equipment lining the hallway, and the thumbs-up from curlers as they leave the building.

The Chaska Curling Center reopened Monday after a months-long closure familiar to businesses in the pandemic.

“I think it’s exciting and encouraging for us as staff,” said Jeff Isaacson, Curling Center manager. “We’re looking out there just happy to see people using the ice again and feeling comfortable coming into the building.”

Limited to 25% capacity, center staff are doing more overnight cleaning and encouraging safety in the building. With the statewide mask mandate, members must wear facemasks in the building and on the ice, except when actively curling.

Although Isaacson said the city owned and operated center lost over $256,000 from March to June, he’s hopeful.

“We want people to come back and curl and enjoy it again,” he said. “That’s been fun to see activity on the ice again.”

Walk into the Curling Center today, and it looks a little different. There’s less voices greeting visitors from the Crooked Pint, and fewer members shuffling on the ice.

Perhaps the most noticeable consequence of the virus is the people. Specifically, how many people are back on the sheets.

Isaacson said about 60 teams are signed up for the first summer season, compared to 80 on average. Each league team has two or three players, he said.

Corporate events, which offered a substantial part of the center’s revenue, are off until further notice. For now, large work groups coming together for a day of curling are a thing of the past.

Tournaments and camps are off the table, too. It includes Chaska’s Fire & Ice Bonspiel and the canceled High Performance curling camp.

Though the Curling Center is a national training site, that may be less obvious this season. About 75% of Curling Center users are from outside Chaska, yet these days, teams won’t fly in for curling or camps, and people may not feel safe traveling far from home.

But it could be a blessing in disguise. Less traveling means more locals can take advantage of their area curling center.

“I feel good about it actually. I mean, having more of that close proximity to us, Because I think the travel is still the scary part,” Isaacson said.

Leagues are almost always filled with local players, since they meet every week. The most someone will drive is typically an hour or two, he said.

It was a string of words Batoyun Uranchimeg remembered saying often before the Curling Center reopened. She hoped the anticipated reopening date of July 27 would remain — and she was in luck.

That very Monday, the U.S. National Wheelchair Curling Team player was out on the ice and happy to be back.

“It’s so great. It’s just — I couldn’t wait and I’ve been keeping an eye on when it was going to open,” she said.

Uranchimeg has been curling for four years. Usually she alternates practices between the Blaine and Chaska centers, fitting in four-hour time blocks on the weekends with her full-time job.

With COVID-19 in the mix, she’s working from home. It offers her more flexibility to curl during the week.

“I actually brought my computer with me and then just sneak it in a little bit and do my job,” she said, laughing. “I’m working remotely. It doesn’t matter where I am.”

Everything is on hold for the three-year competitor, who sits in the top eight of players. There weren’t Paralympic team tryouts this spring, so she’s still on the team, but hasn’t had official practices yet.

Others returned to the center with more of a recreational goal.

Robert Erickson, from Lakeville, and some of his buddies get together on Mondays for a few hours of pickup curling. From the very first Monday the center reopened, the handful of men were ready to pick things up where they left off.

Erickson sometimes practices in a Lakeville curling center, which won’t reopen until at least October.

“The sport is very easy to play at a distance,” he said. “It’s the ice that you have to think about now with the masks.”

Most players wear their masks from start to finish, Isaacson said.

“It was difficult yelling from end to end when you’ve got a lot of people in there. Add the mask into it and now it makes it even more difficult,” Erickson said.

DAY ONE AND BEYOND

Curling instructors are on hold until groups return. Staff are back in the building after furloughs, though may not have as many hours as they’re used to.

Staff are figuring out how to make events more regional and use each day as a learning period.

“We’re just going to use the next weeks and months to see what’s working, what’s not, what additional things have we thought about,” he said. “And then I think we’ll really start to better understand the impact it’s having on a bigger scale.”

New members, which total 31 since June 1, are trickling in and offering a silver lining.

Isaacson said he thinks reopening can be done safely, and it’s the center’s goal to do just that.

If visitors wear a mask and play by the rules — both virus- and curling-related, the sport could be here to stay.

Numbers are based on a three-year average from 2017 to 2019. Information compiled by Jeff Isaacson.