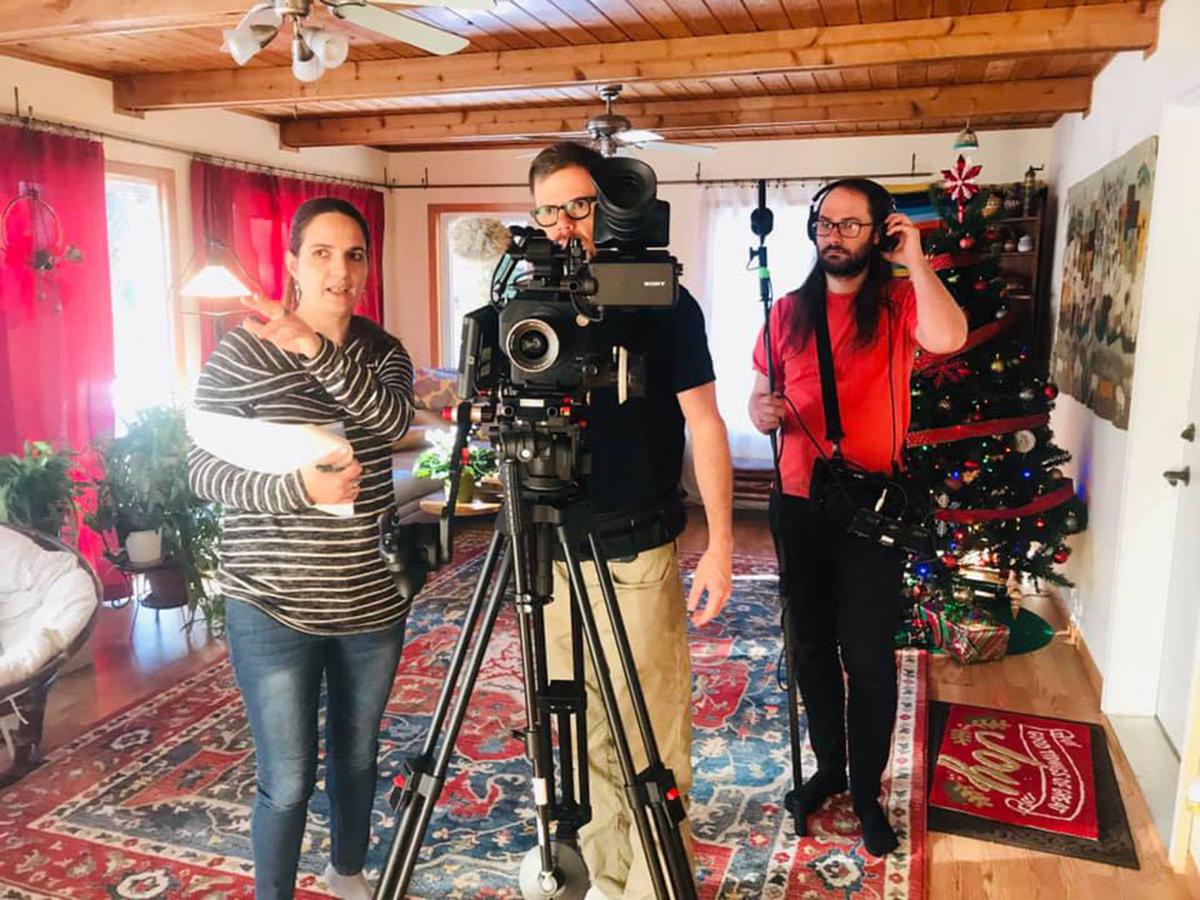 Director Anna Goranova, left, instructs the “A Present for Grandma” crew in an Edina home. 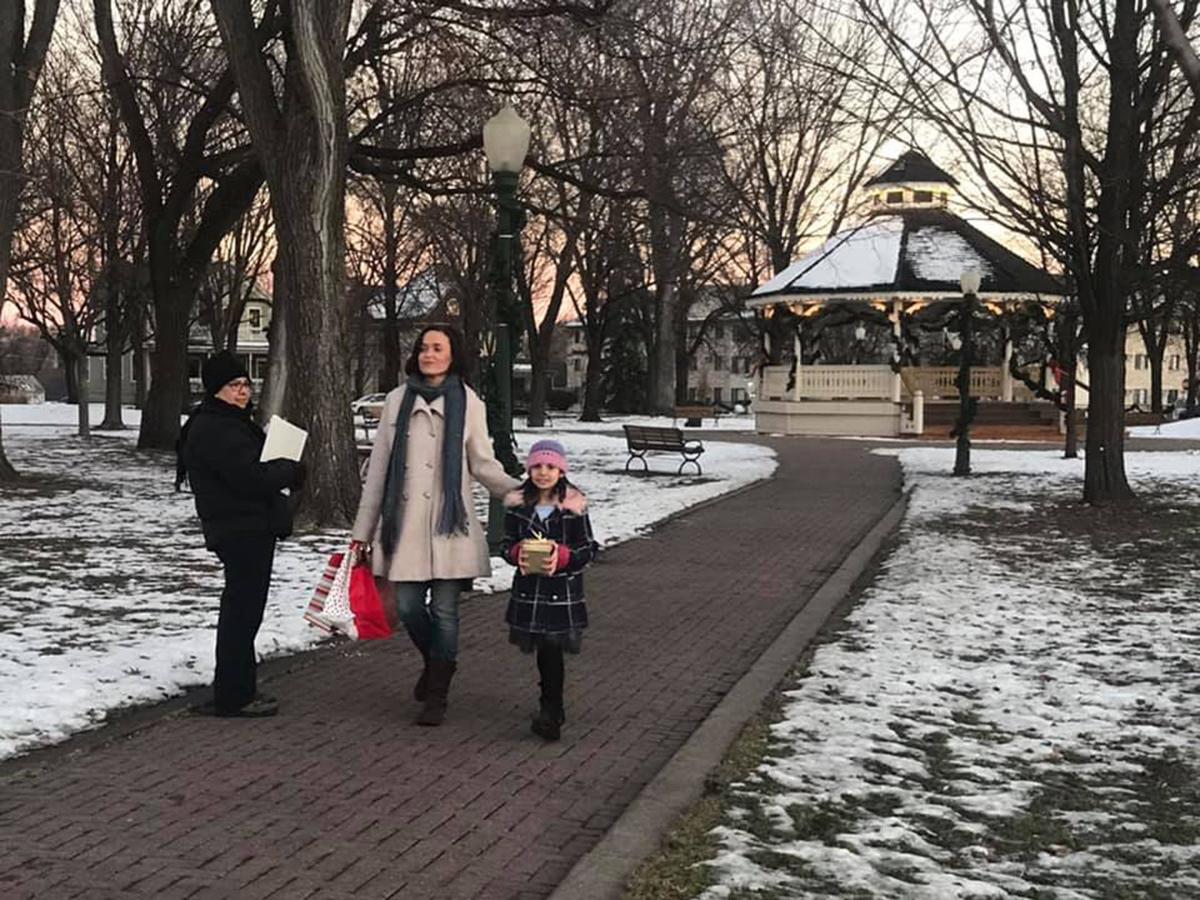 Crew and actors walk through City Square West in Chaska, featured in the short film ‘A Present for Grandma.’ 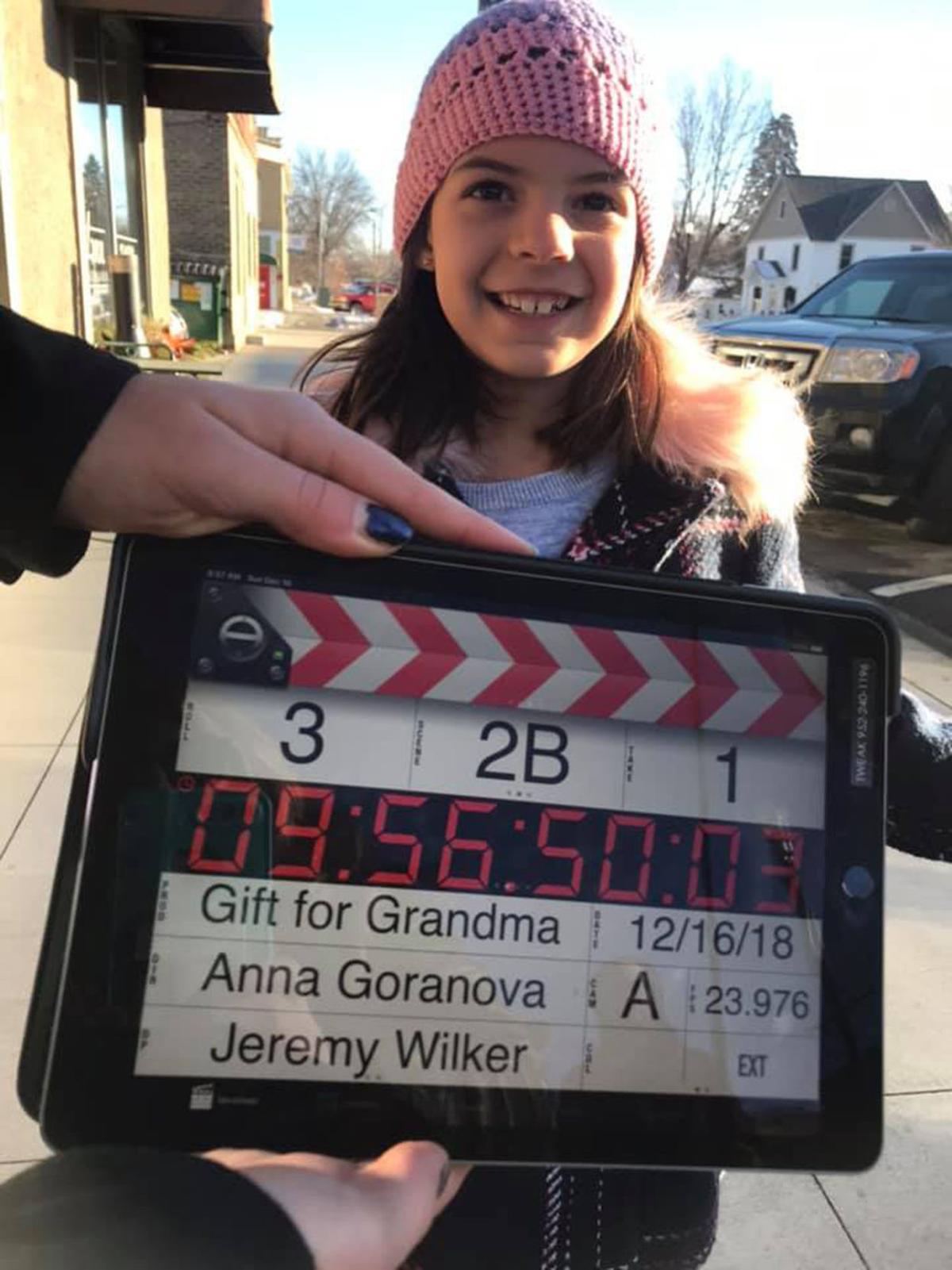 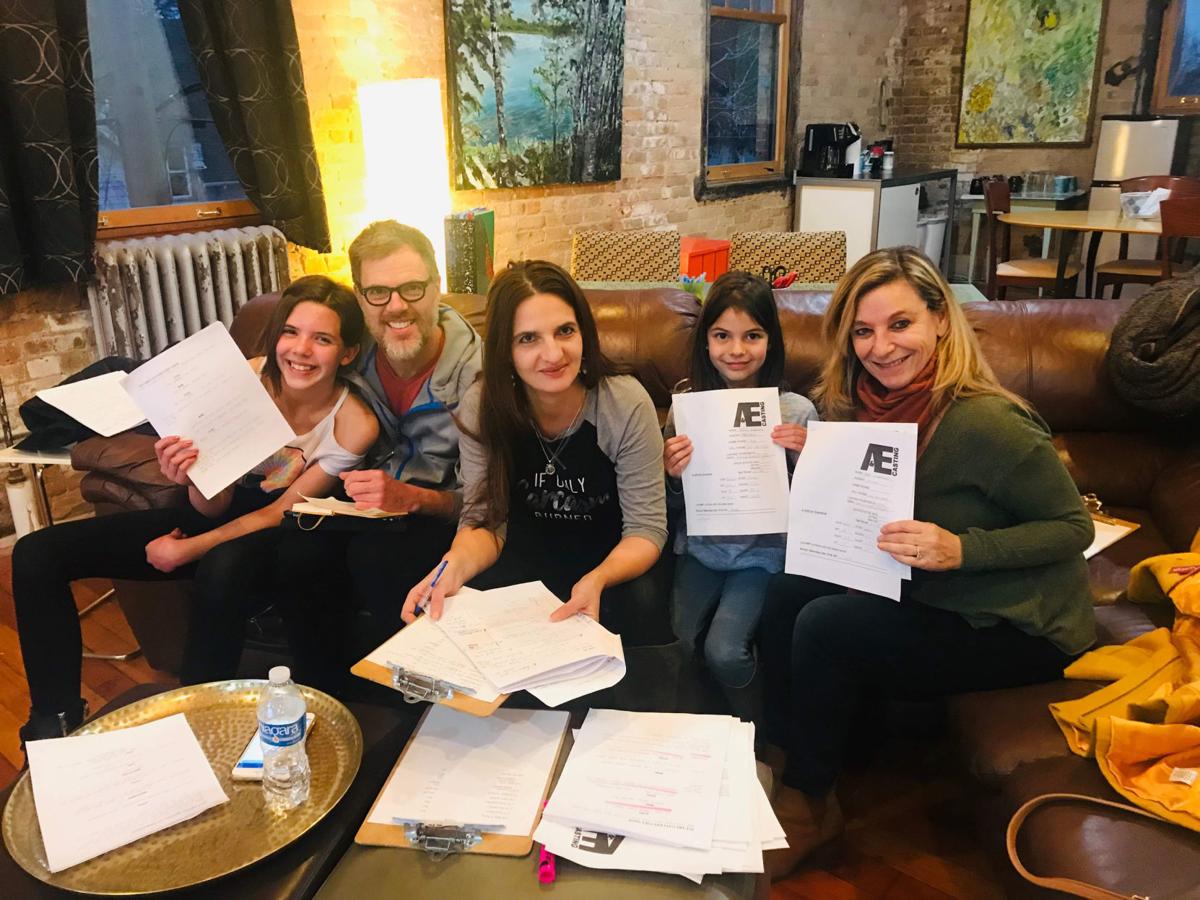 Director Anna Goranova, center, sits with “A Present for Grandma” cast and crew. 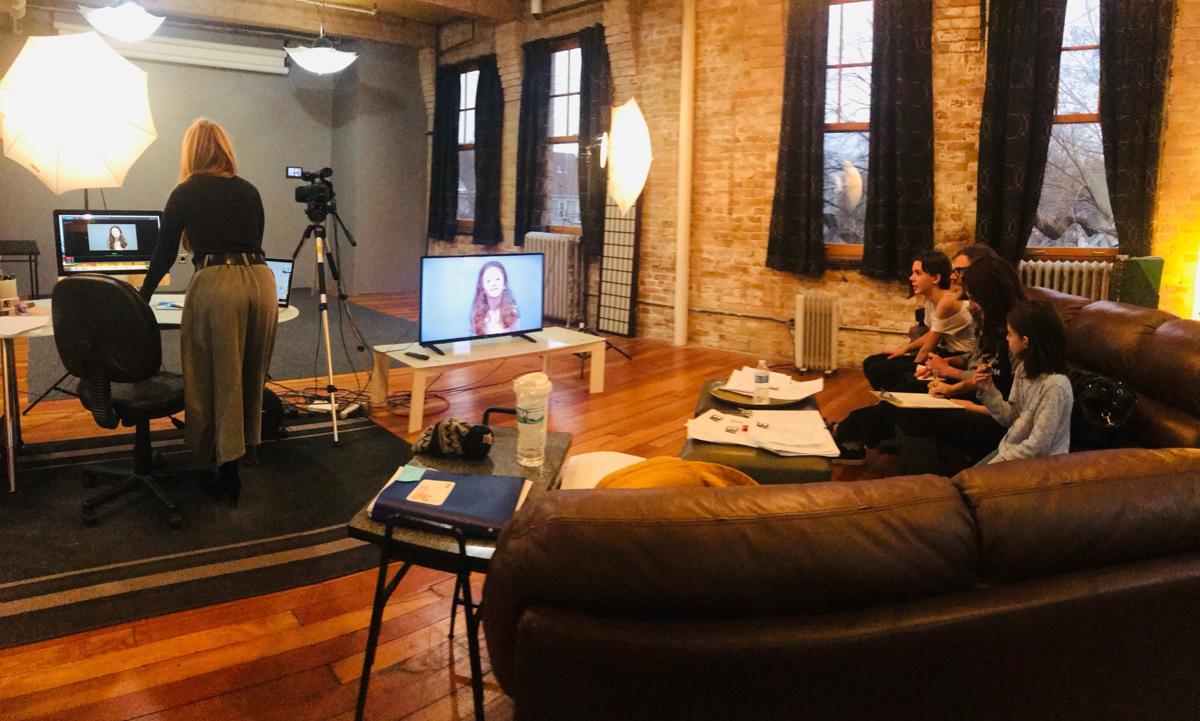 A behind-the-scenes look at the making of “A Present for Grandma.”

Director Anna Goranova, left, instructs the “A Present for Grandma” crew in an Edina home.

Crew and actors walk through City Square West in Chaska, featured in the short film ‘A Present for Grandma.’

Director Anna Goranova, center, sits with “A Present for Grandma” cast and crew.

A behind-the-scenes look at the making of “A Present for Grandma.”

Carver County appears on a list of movie sites from the 1970s, 1990s and early 2000s. Between “Drop Dead Gorgeous” and “Fargo,” the area seems to be prone to shots along Highway 212 or the Chaska Herald building.

It took a handful of years after 2011, when “The Convincer” was filmed, for residents to start seeing cameras in the area again.

Though not a feature-length film, for a weekend “A Present for Grandma” found a home in Chaska’s City Square Park and local shops. The eight-minute film opens with a shot on West Second Street on a cold, mid-December day.

Cameos show up as the Guardian Angels Catholic Church steeple, the hard-to-miss Thread-tastic! sign and the well-known Dunn Brothers Coffee building. If a Chaskan looks close enough, they might even spot their car or home.

“I think I wrote the story before I moved here. I had another city in mind, Stillwater,” said Goranova, who now lives in downtown Chaska.

“When I moved here I was like, ‘Oh! Here it is. I don’t need Stillwater anymore. This is the town. I found Chaska.'"

In 2017, Goranova connected with other creative individuals and began writing a script. The story, which features a young girl shopping for a gift for her grandmother, has a twist ending and was based on her own family’s experience.

After graduating film school in Bulgaria, Goranova worked on U.S. films like “Death to Prom,” “Sand Box,” and “The Running Nun” and documentaries including award-nominated “Hmong Pioneers.”

“Anna and I traded lives.”

It’s how Melody Gilbert describes her relationship with Goranova, who is from Bulgaria but moved to Minnesota almost a decade ago.

Gilbert, an independent documentary filmmaker, now teaching media studies in Louisiana. She produced “A Present for Grandma” along with Minneapolis filmmaker Jeremy Wilker. Teaching for four years at the American University of Bulgaria led Gilbert to Goranova’s family, but the two knew each other before the big move.

“I met her family and her husband's family in Bulgaria,” Gilbert said. “Over the years we've just become very close filmmaker friends and just friends.”

It’s how Goranova decided to contact Gilbert when she needed producers for the short film, but Gilbert wasn’t used to the genre.

“I usually only do documentaries,” Gilbert said. “She sent (the script) to me and I’m like, ‘But you know I don't do fiction.’”

Soon enough, though, Gilbert was setting up a crowdfunding campaign for the film, connecting Goranova with a camera crew and helping cast actors.

The plot idea came about when Goranova’s daughter, 8-year-old Anna-Maria Mihaylova, lost her grandmother. She would ask difficult questions back then.

“‘What's going on? What is she doing up there in the sky?’ Goranova remembered. “(She was) trying to figure out what’s happening when the people were gone.”

Those questions touched Gilbert, too.

“I went through that with them. We would come home in the summers and visit with them and spend time with them,” she said.

Gilbert called Anna-Maria “inquisitive.” The La Academia student would ask what Gilbert remembered about her grandmother and where she was now. It was fuel for the film.

For the main role, Goranova cast a young girl familiar with commercial acting, but five days before the shoot the family pulled her out. Luckily, Anna-Maria had been practicing the lines.

“It was difficult because she was 7 years old and we were shooting for 12 hours and she got tired,” Goranova said, but noted her daughter’s persistence. “I think it was pretty good. I think she did well. She was determined. She was organized.”

It was Anna-Maria’s first time acting in a film, though she’d tried her hand at theater before.

“I was excited because I’ve never been in a movie before,” Anna-Maria said. “It was also fun because you have like friends by your side and when I have free time, I can play with them.”

Anna-Maria said she’d never worked under her mother’s direction before, calling it “cool” and “fun.” To Goranova, those adjectives ran true — but it was still difficult. Sometimes she’d ask Gilbert to give direction to Anna-Maria, hoping the authority shift might move things along.

“We relied a lot on her,” Gilbert said of Anna-Maria. “Sometimes she would respond to me a little bit better.”

Goranova approached shop owner Rachel Zacharias of Birchwood & Pine, which sat on Second Street for a little over a year, to ask if they could film there. The shop had just finished redecorating for the winter holiday season and Zacharias knew Goranova so ‘yes’ was an easy answer.

Zacharias shut down the store for the weekend and even played herself in the film.

“We were obviously more than happy to have her and her film crew,” she said. “It was a lot of fun.”

The last day, the crew set up cameras on the snowy lake.

“That was a difficult one,” Goranova said.

They had to avoid filming any fishing houses in the cold temperature.

In the future, Goranova said she isn’t looking to feature the film at any more festivals but wants to keep creating. Now in the software industry, she doesn’t consider filmmaking her main job but does say it’s her main passion.

“That's the point — so to have another job and just do my project, not to wait for some other project to work on for somebody else,” she said.

Goranova plans to create another short story in the summer before trying a feature-length narrative. Looking back at this film, she hoped people would feel something.

“I think people are getting that emotion and at the same time the positivity of it. Everybody was emotional,” Goranova said. “To enjoy or the people to entertain them, just make them feel touched by the movie. I think I have achieved that.”

“For Anna, writing this script was kind of a way of processing this for her and her kids. It was a really, I think, very cathartic and therapeutic experience for everyone involved.”