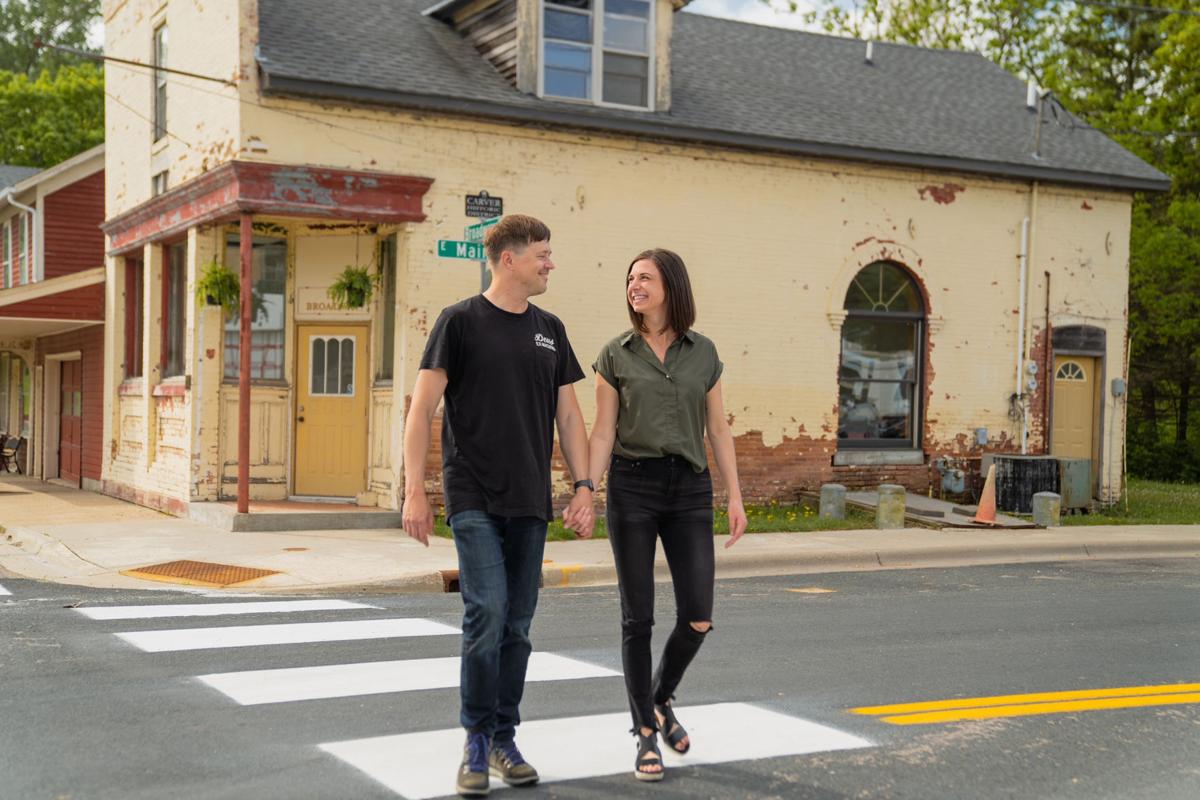 Nate and Terah Roise are restoring the 150-year-old building at 120 Broadway Street in downtown Carver. It will serve as a coffee house, event center, and upper-level apartment complex. 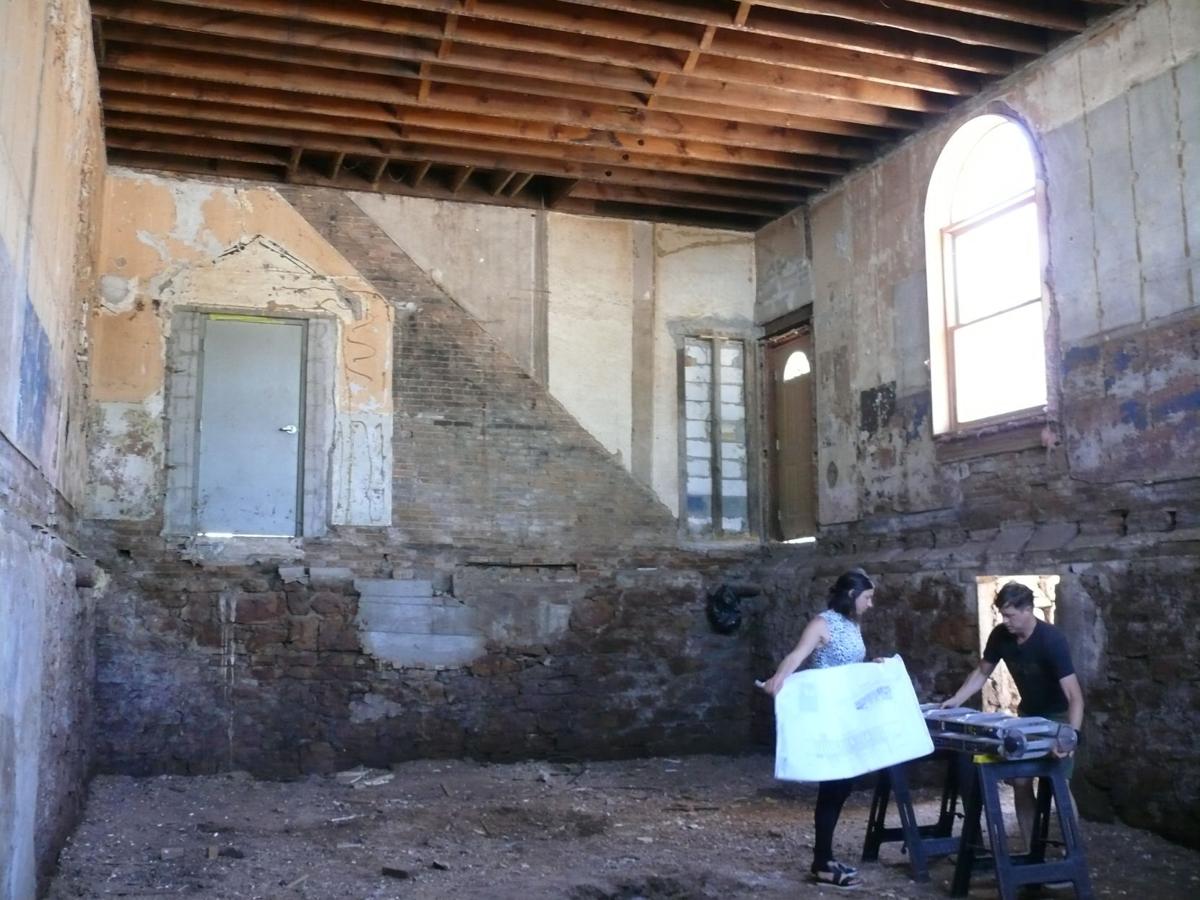 Nate and Terah Roise check blueprints in the building they are restoring at 120 Broadway in downtown Carver. 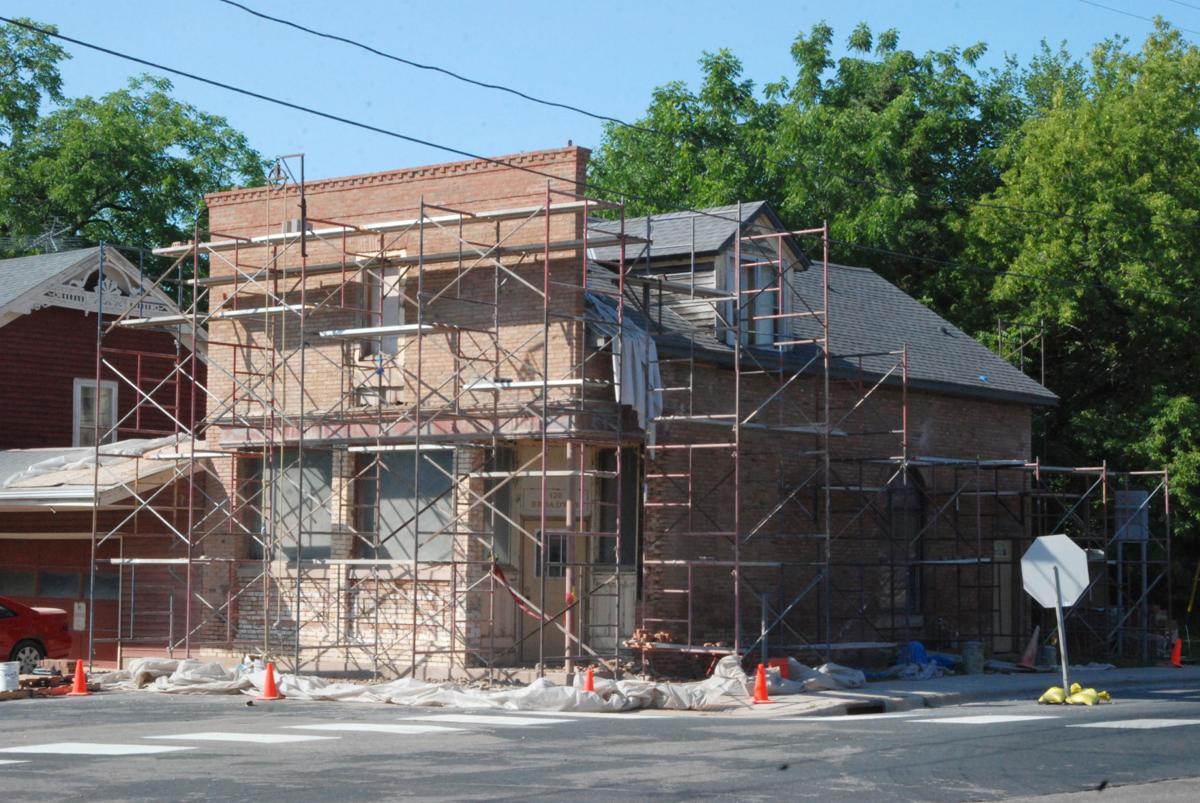 Restoration continues at 120 Broadway Street in Carver, with a majority of the work expected to be completed by the end of the year. 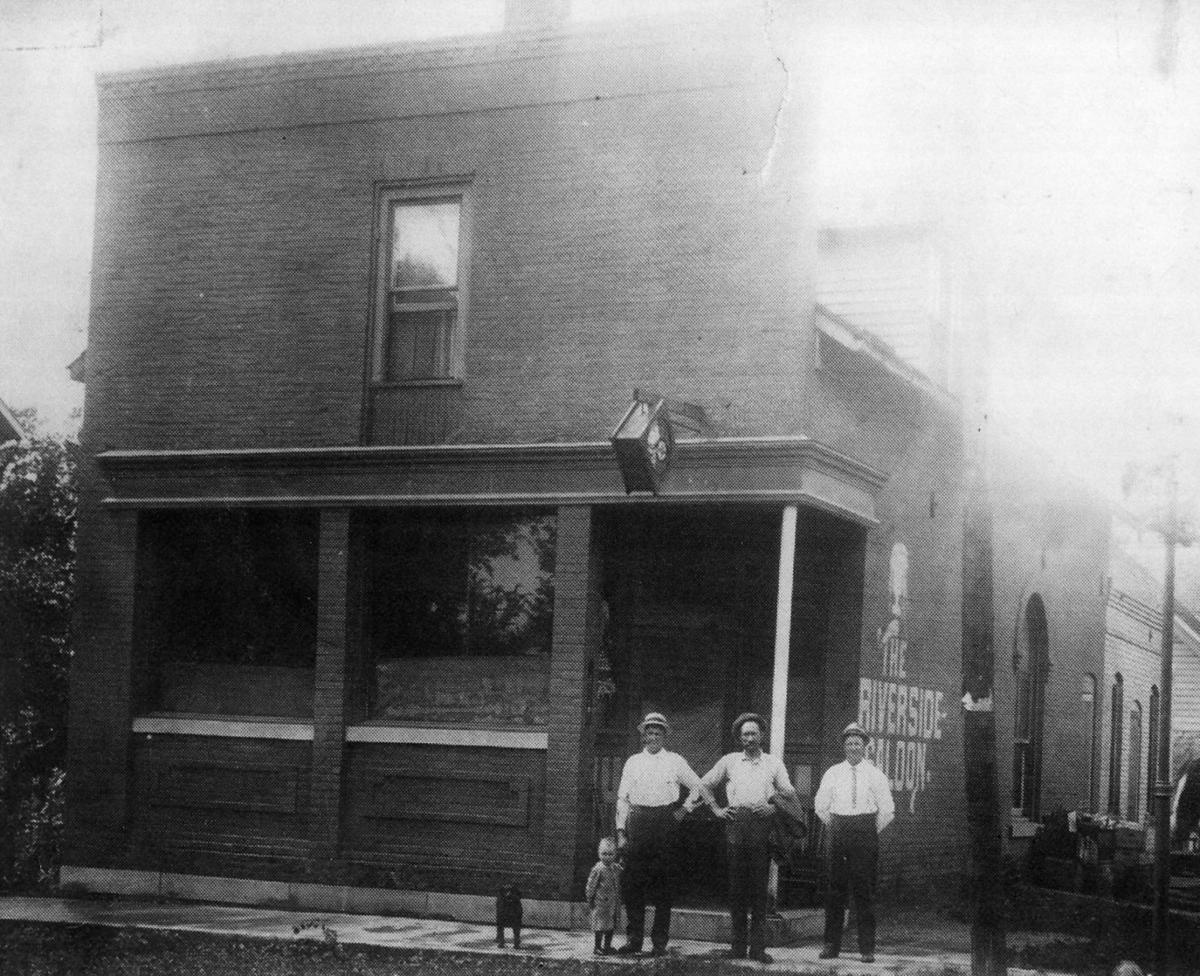 The building at 120 Broadway Street in Carver, pictured in the 1920s, has housed a number of businesses over the years, including a saloon. 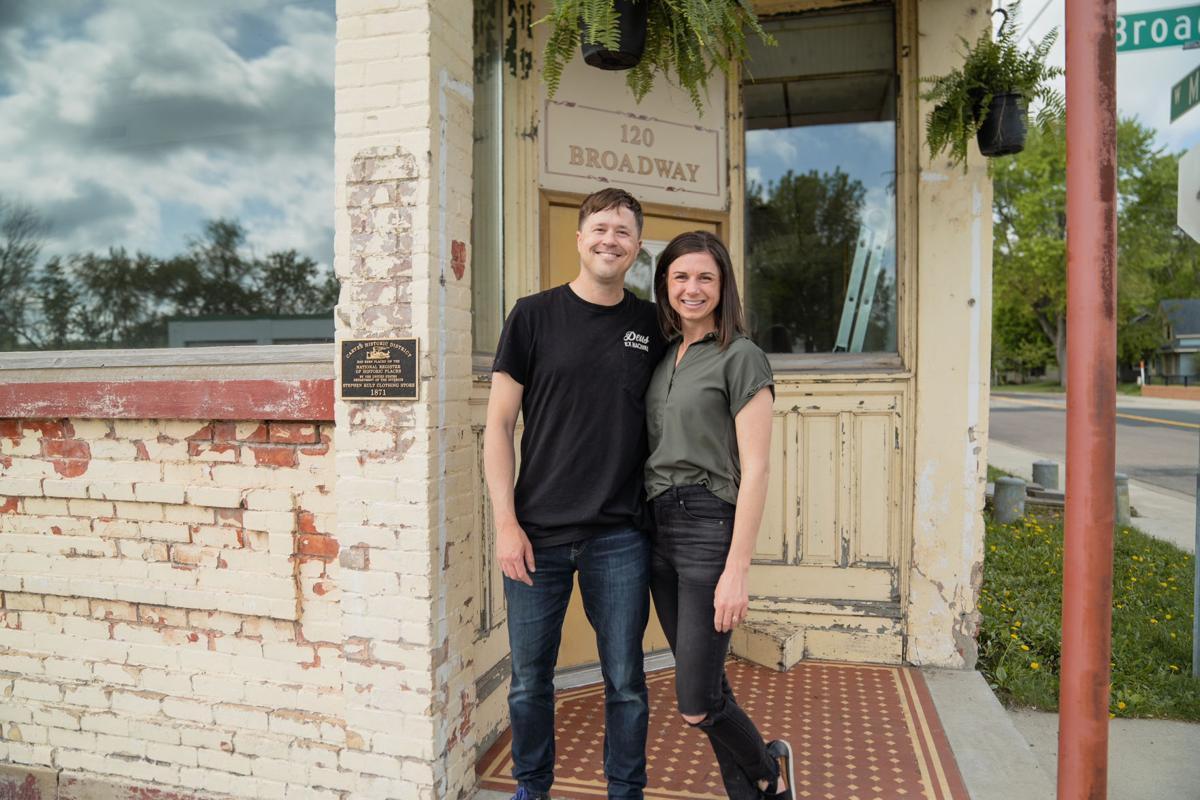 Nate and Terah Roise in front of their historic building. “I’ve wanted to renovate a corner brick building on a main street since I was 22 or 23,” Nate said.

Nate and Terah Roise are restoring the 150-year-old building at 120 Broadway Street in downtown Carver. It will serve as a coffee house, event center, and upper-level apartment complex.

Nate and Terah Roise check blueprints in the building they are restoring at 120 Broadway in downtown Carver.

Restoration continues at 120 Broadway Street in Carver, with a majority of the work expected to be completed by the end of the year.

The building at 120 Broadway Street in Carver, pictured in the 1920s, has housed a number of businesses over the years, including a saloon.

Nate and Terah Roise in front of their historic building. “I’ve wanted to renovate a corner brick building on a main street since I was 22 or 23,” Nate said.

The building at 120 Broadway in historic downtown Carver has served many purposes over its 150-year history.

Now, it is being majorly renovated for several more purposes, primarily as a coffee house, all to meet present-day needs and desires, according to new owners Nate and Terah Roise.

The majority of the coffee house, gathering place/event center, and upper-level apartment complex, is expected to be completed by the end of the year.

“We are really convinced that this kind of space is needed and would be loved by the people of Carver,” Nate said. “We both love coffee and want to provide a place for people to gather. The concept of it all just excites us.”

“We are passionate about bringing the community together and creating a community space; and coffee goes well with that,” said Terah.

Interest in the coffee house, named Getaway Motor Cafe, is drawing plenty of attention in the community.

The couple said people have stopped them on the street and asked them many questions about the business, particularly if they were opening a coffee shop.

The building has contained a wide spectrum of business ventures from the time it started in 1871 as the Stephen Kult Clothing Store, according to historical records.

It has also housed, in part, Peter A. Johnson General Store, Alois Loew Saloon, Riverside Café, Al’s Place and Riverside Bar, according to those same records.

But for the past 22 years, the building has primarily been vacant, which led to some interior concerns.

“We had to take out the main floor because it had some moisture issues,” Nate said. “The upper floor had some holes that we’re getting fixed.”

A recent tour of the building evidenced exactly what the couple said — a dirt basement, no main floor and minor gaps in the second-story flooring.

“Lots of work to do,” Terah said with a smile during the tour and while glancing at blueprints of the renovation plans. “It’s going to be worth it.”

Those plans call for a coffee shop offering premium blends, as well as fresh pastry and other offerings to compliment the beverages. A patio addition will offer more space for gatherings and parties, and a second-level area adjacent to the apartment will add more opportunities for gatherings.

The Roises are utilizing many of the plans that the previous owners had for renovation, but adding their own twists.

Nate has been involved with residential real estate for 18 years and Terah is a media tech instructor at Clover Ridge Elementary. They sold their home in northeast Minneapolis last fall and rented for a short time before finding a house in Carver.

Nate said he “became fascinated” with the Carver community while routinely motorcycling through the city.

“About a year ago, Nate came home from riding a motorcycle and just talked about downtown Carver,” Terah said. “There was the charming aspect of this street (Broadway) and it’s close to my work — right where we want to be.”

Nate said his business vision seed was planted in his early 20s.

“I’ve wanted to renovate a corner brick building on a main street since I was 22 or 23” he said, getting a nod and smile from Terah in agreement. “I had the goal to always do that. I always thought it would be in northeast Minneapolis, but this couldn’t have worked out any better. This is a great town, great street and we’re really looking forward to doing something special.”

“I would say we are both up for different adventures and we do things out of the box,” Terah said. “This is just another adventure.”

Carver Mayor Courtney Johnson said she is “thrilled about the business coming to that spot. It’s going to be great for the downtown and we appreciate the leap of faith they are taking. I can’t wait for it to open.”

Johnson said it will offer a needed gathering place for many, including her when she is looking to meet with people outside City Hall, which is just down the street.

The Roises said it has been a tricky balance to preserve the integrity of the building while still modernizing it enough to meet business demands.

“We want to make it usable and attractive, while maintaining its historic character,” Nate said.

Terah, who said she is looking forward to “giving people their coffee every morning and building relationships,” said the nearby Minnesota River and trail will be a draw to the business.

Nate anticipates motorcyclists who commonly travel through the downtown area will be regular customers.

“We think this is an ideal location,” Nate said, adding that suggested plans for a park and splash pad nearby would also benefit downtown businesses. “We just think there are so many positives to this.”