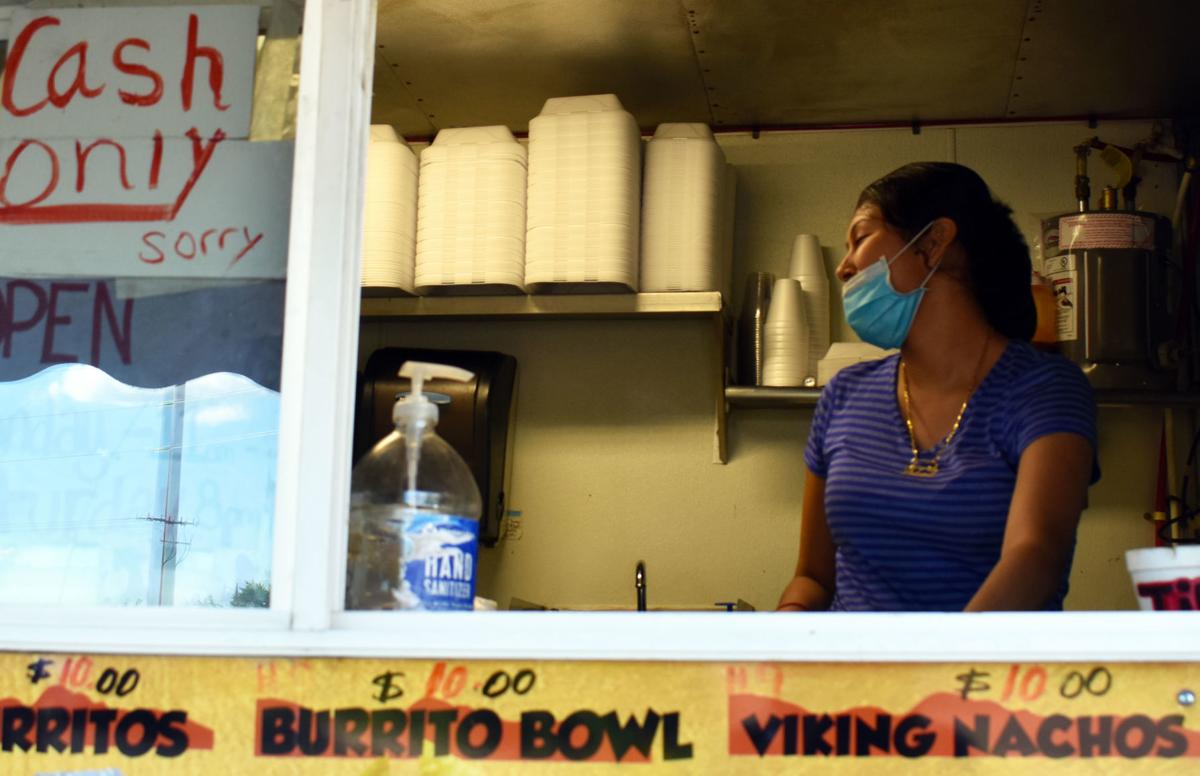 Paloma Rovero, 16, inside the El Chido Taqueria truck in Chaska. 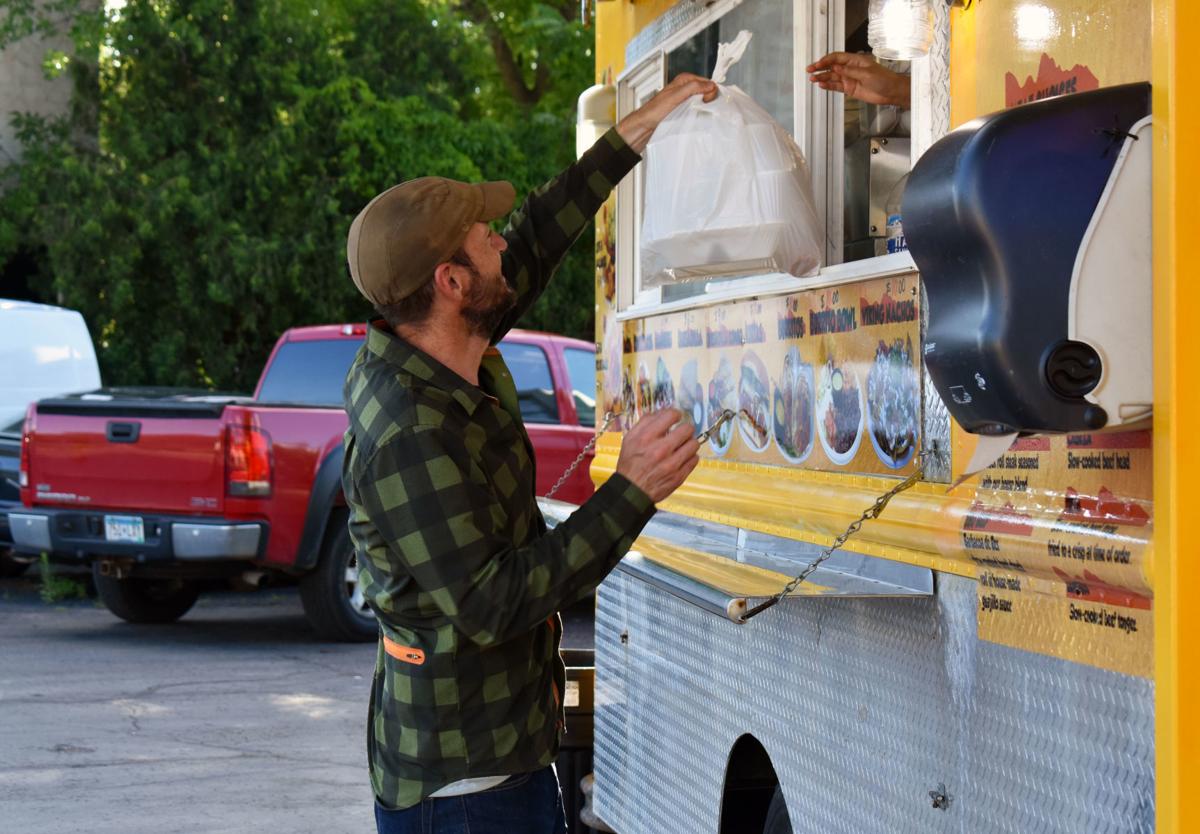 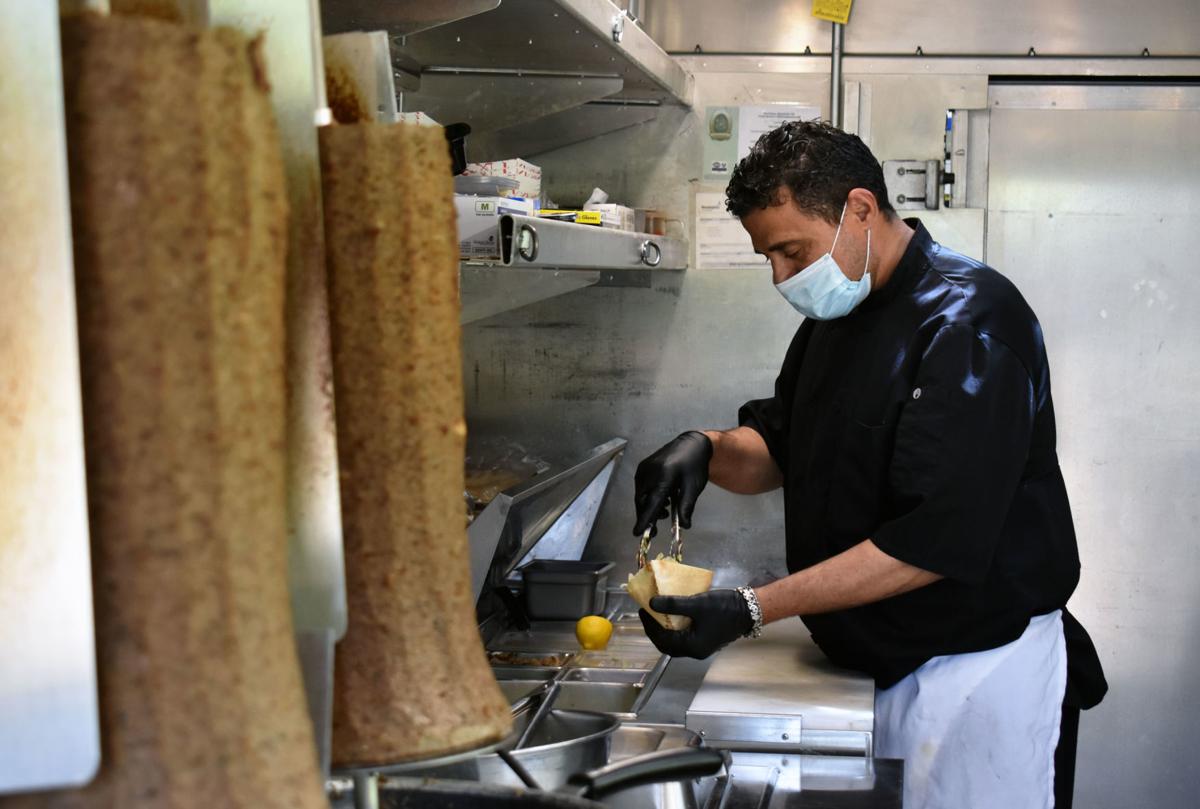 Thabt Osman Mohamed, owner of Pharaoh’s Gyros, based in Savage, makes a chicken gyro in his food truck, parked outside the University of Minnesota Masonic Children’s Hospital in Minneapolis.

On the outside, the El Chido Taqueria truck seems chipper. It’s got bright yellow paint with appetizing food photos adorning the side, complete with big handmade signs reading “OPEN” and “cash only.”

Step inside and you’ll find a family struggling to serve customers like they did last year.

“Business is very slow,” said owner Maynor Rovero. “Now it's kind of going OK, but not like the other years.”

On a given summer night, a food truck makes its way into view off Chaska Boulevard and Yellow Brick Road. Serving burritos, tacos, or $5 chips and guac, the family-owned business has been in Chaska for a few months so far this year.

Rovero said his family has been “doing OK,” but they recently closed for two days for lack of customers.

Every employee wears face masks and uses more hand sanitizer than usual, even stocking it outside the truck for visitors to use. They’re also keeping more distance between the cashier and customer, he said.

Rovero wants to use credit cards soon to limit the risks cash poses, but as of now, they don’t have internet inside to make that work.

A few miles away, Kurt and Carrie Anderson share a much different story.

Last year, the couple started Pretty Great Cheesecake, which ran year-round, parking at Chaska Cubs games or other local events. But with COVID-19 limiting those large-scale gatherings, they had to think out of the box.

The day before Mother’s Day, the Andersons opened up shop in their Chaska driveway. Selling 530 cheesecakes in under four hours, they knew it was time to get on the road again and see where else they could be successful.

“We’ve been crushing it,” said Kurt, who serves with the Chaska Fire Department. “It’s been insanely busy for us. I can’t even make cheesecakes fast enough.”

So they started driving around to different neighborhoods, mostly per request of community members. From the spring to fall last year, they sold 4,600 mini cheesecakes. This year?

Though the pandemic forced them to cancel gigs with festivals and other summer events like farmers markets, they attribute their success to Carrie’s marketing and online presence.

That, and there’s the novelty of their business in particular.

He said other more-traditional food trucks compete directly with one another.

“Whereas we pair up with them really well,” he added.

The couple said it’s been an enjoyable experience, even considering COVID. Since they bake all their goods beforehand, there aren’t distancing concerns that come with a line of people waiting for food.

They wear gloves when they bake the food and have a card reader if people prefer to do away with cash. And since they’re up higher in the truck, it’s a built-in social distant interaction.

Since it gets “really, really hot” inside a food truck, combined with a lack of direct contact with food, Kurt said they don’t wear masks.

“I would probably pass out if I wore a mask,” he joked.

For Salma Habid, wearing masks isn't as much of an option.

She manages Pharaoh's Gyros, based in Savage. The Mediterranean-American food truck has worked at Taste of Chaska and the city’s annual farmers market.

With three gyro machines, a grill and a fryer working up a sweat in the truck, it often gets up to 100°F inside.

They’re taking extra precautions like using and offering hand sanitizer and changing gloves every 20 minutes. And since they make food directly in the truck, they need to work with masks on.

“It’s hot, but we have to go with it. We cannot serve anyone without wearing masks,” she said.

But that’s not the toughest part of running a food truck in the time of COVID-19. They’ve been running for nine years and started this season in mid-May. Business this year?

The family applied for a loan this year to pay for its license, kitchen items and storage, but hasn’t heard back yet. Habid said they cut employee hours this year, too, since they had to cancel so many festivals and can't afford it.

“I would say like 85% of the sales that we get we depend on the festivals and the gathering events,” Habid said.

Taste of Chaska, moved to mid-August, is Pharaoh’s Gyros’ last chance this summer to bring in guaranteed income, pending confirmation of the event.

They’ve got two trucks around the cities every day at gas stations, breweries and neighborhoods, to name a few.

They even added pickup and delivery options this year, but lines just aren’t what they used to be. Habid said they’ve lost around $65,000 this summer alone.

But she’s keeping her chin up.

“It’s not as good as we used to make last year," she said. "But it's better than nothing."