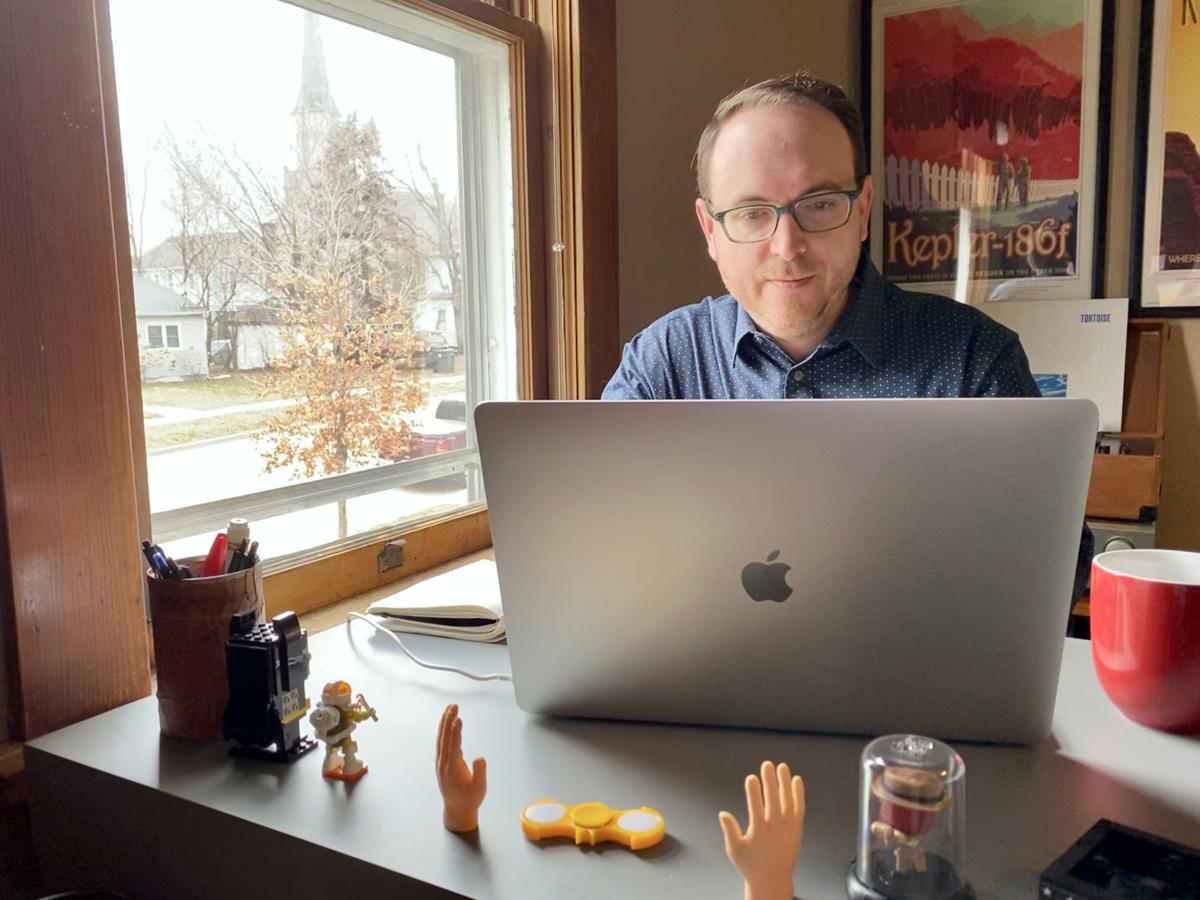 Greg Swan works from his home office in Chaska. 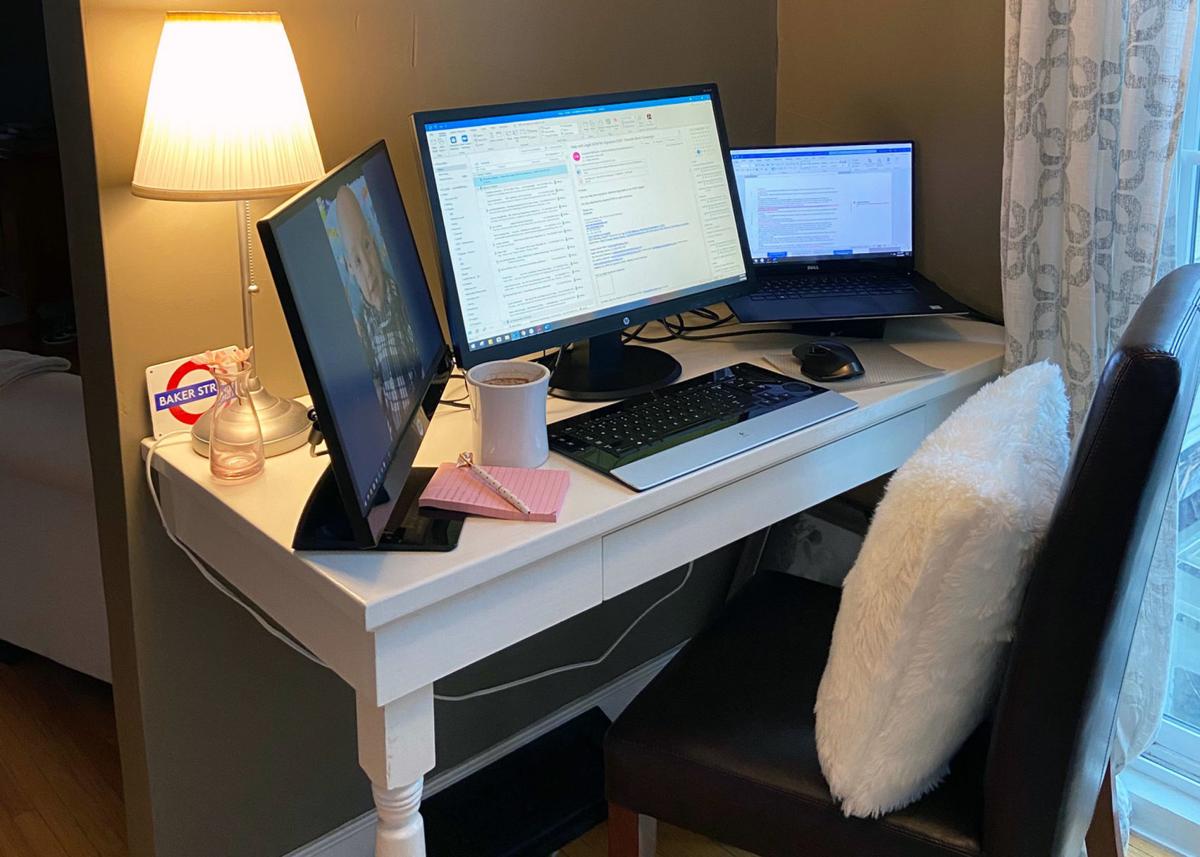 Amie Krone’s home desk features three monitors, a bit of natural and artificial light, and a cozy pillow to top it all off.

Greg Swan works from his home office in Chaska.

Amie Krone’s home desk features three monitors, a bit of natural and artificial light, and a cozy pillow to top it all off.

As the weeks pass, those still employed are getting used to working from home.

For many, it was an abrupt switch. COVID-19 quickly caused businesses to close and remaining workers to be productive in their homes.

Luckily, some say technology is making the change easier.

Chaska resident Greg Swan is no stranger to wired work. He currently heads the digital team at the Minneapolis advertising agency Fallon, and works with social engagement and PR for Brainjolt, a media publishing company based in California. Each week Swan blogs about trenching technologies.

He's written about Zoom video communications and advice for virtual meetings — priming him for technology tips for those less apt to working from home.

But before he offers guidance, he wants to get one thing straight: let go of perfection. Our homes aren’t offices, and that’s OK.

“We all have kids or dogs or doorbells ringing. We’re all working from home. We’re all here,” Swan said. “It’s OK and you can laugh and acknowledge them, or you can also ignore them at this point. It’s so just a given now.”

Lots of people aren’t used to new tech-savvy expectations, and he said many are being thrown into a world they’re not used to. But again, he said perfection isn’t the goal.

Swan reminds folks to “give grace” to those people, maybe setting up a one-on-one meeting to walk those having difficulty through certain tools.

It’s even a change for Swan.

He’s been a digital marketer his entire career, but says he’s never been on camera this much and this often.

“I tend to want to multitask and not look at the camera or not worry as much about what’s in the background, and with a few small tweaks, it really changes the experience for you and everyone that you’re involved with online,” Swan said.

Those “few small tweaks” might look like some ideas Amie Krone has. A Chaska resident, she’s been the director of operations and HR at TopRank Marketing for over a decade.

Krone's first tip is to branch out of the ordinary and see what works for each company.

“Don't be afraid to test things,” Krone said. “It’s just what works for you. There's not going to be one thing that is going to do it all, unfortunately, but just, ‘What is it that’s wanted from your employees, and how can you make it easier to help them stay connected?’”

Krone said her company has a few different platforms. It uses Zoom for conference calls, Slack for quick updates or questions, and another project management system for connecting.

“That’s all online and digital, so people don’t have to walk over or talk to somebody to see what’s actually needed,” she said.

But perhaps her most crucial tip? Keeping up employee morale.

Krone said TopRank made a three-times-a-week cadence to break up the monotony of being at home. It starts with “mixtape Monday” where staff make shareable playlists. A few days later is “walkabout Wednesday.”

“Get on a conference call and go out and walk, if it’s nice out, and chat on the phone,” Krone said. “Just to sort of get out and have a break. It’s harder when your commute is five steps away.”

The end of the week brings a virtual happy hour. It’s a chance to decompress, hang in and not talk about work.

In the absence of these spirit-boosters, Krone isn’t sure employees would be at their best.

“Otherwise you kind of just sit at your desk all day and you never leave,” she said.

SETTING UP AT HOME

Those home desks, though, have seen some improvements for TopRank employees. Krone said a handful of people brought their office chairs home, and got an extra monitor or keyboard to keep their desk setup the same.

When that was done, Krone and the team worked out the kinks. They spent a few days making sure everyone had what they needed.

“We’ve had quite a few conference calls with, ‘What’s working? What’s not?’ conversations to make sure people are still comfortable and still able to work effectively and efficiently,” she said.

For Swan, an effective desk looks something like this: A carved out section of his bedroom for an “office,” experimenting with a standing desk, and a borrowed LED ring light from his daughter (for better video resolution and quality). He said the latter is especially helpful for those nights when putting work away before midnight isn’t an option.

Overall, Swan said there’s a few things everyone can do on video calls to make life easier for everyone.

Stay on mute while not talking, he said, and look directly at the camera while speaking — not at the screen. Another tip?

“Give nonverbal feedback,” Swan said. “Now that you're on mute you can't just say, ‘Uh huh,’ or, ‘Got it,’ every time so you need to nod and give a thumbs up and laugh.”

In the end, he said being able to work during this time isn’t anything to take for granted. Though there may be stressful bumps along the road, he said it’s important to remember the context of the situation.

“Compared to a lot of folks, those of us who can work from home — and are only inconvenienced by WiFi signals, crying kids, or barking dogs — really have it pretty well off,” Swan said.

“Working from home is a gift. But I have to say I can't wait to get back into the office.”