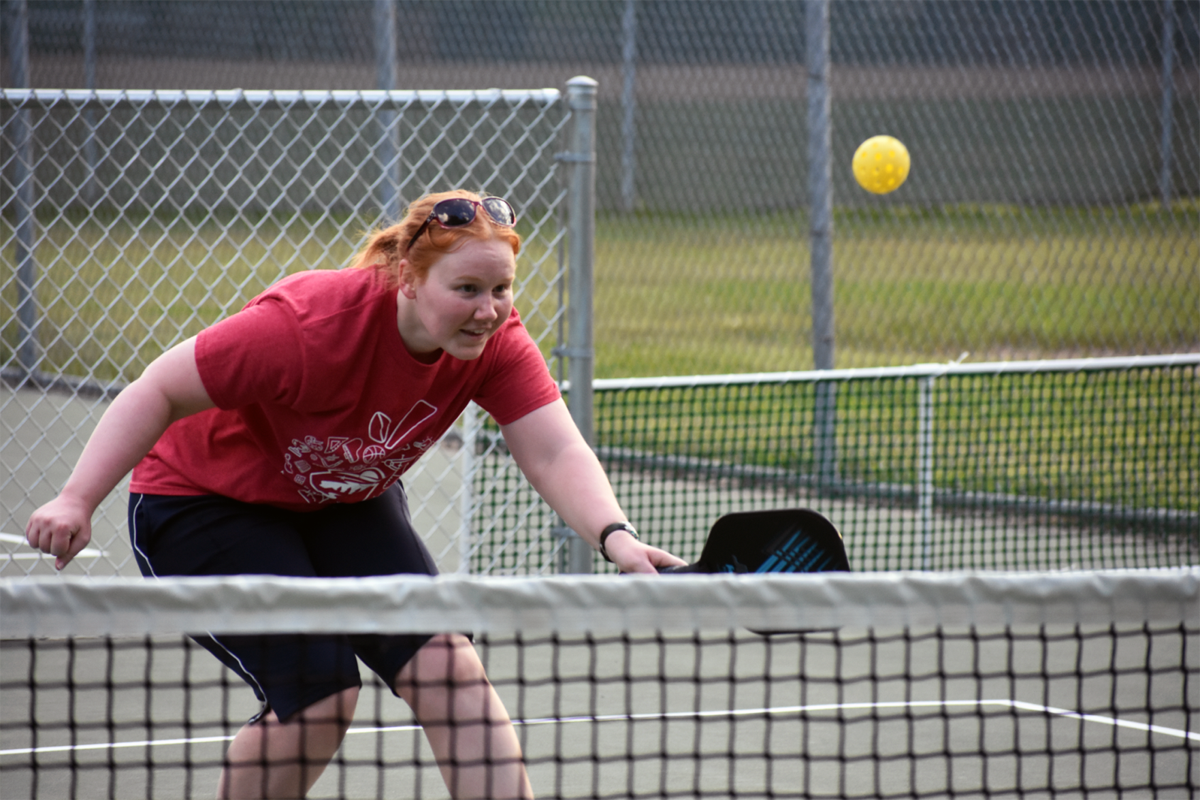 Heather Vilka strikes a pickleball on an early September evening. 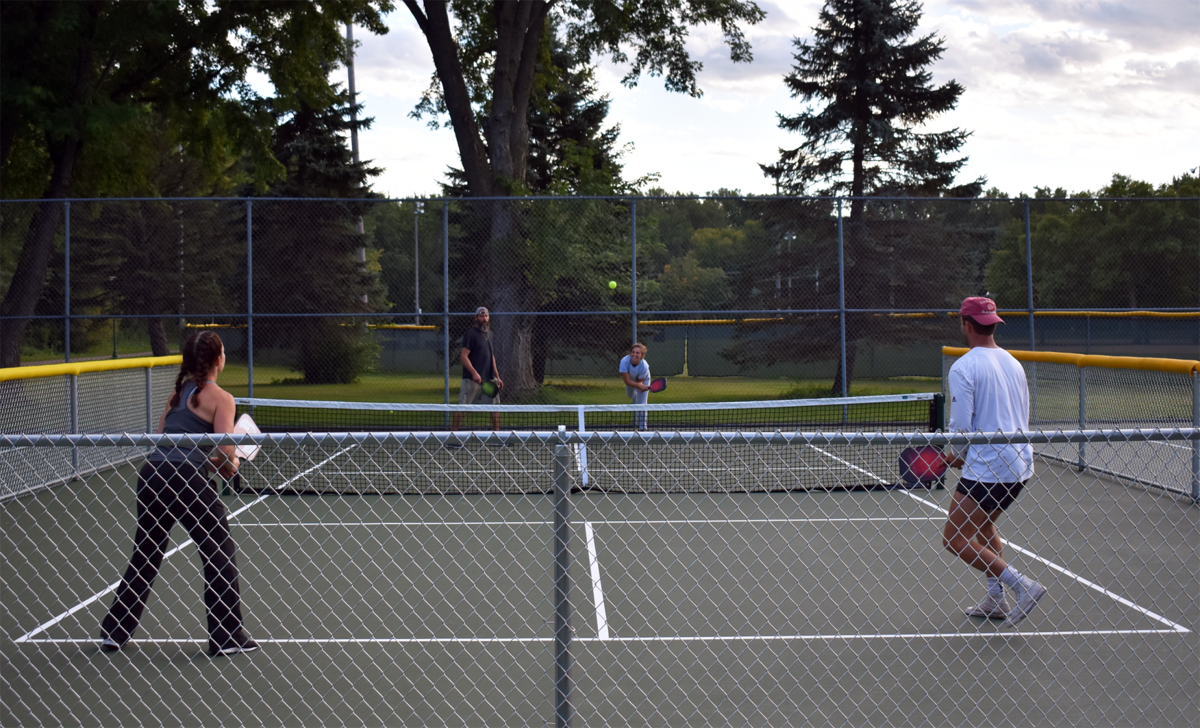 The Kuntz family, from right to left: Carisa, Matt, Kahler, and Matthew, play a game of pickleball at the new Lions Park courts.

Heather Vilka strikes a pickleball on an early September evening.

The Kuntz family, from right to left: Carisa, Matt, Kahler, and Matthew, play a game of pickleball at the new Lions Park courts.

Carisa Kuntz couldn’t even finish her sentence without chuckling.

“We laugh a lot,” the Chaskan said.

But what’s so fun? Here’s a hint: Paddles, a green court, and a ball.

If you guessed tennis, you’re not so far off.

Six new pickleball courts have made their home in Chaska’s Lions Park, making way for Kuntz’s family and other groups to let loose, have a good time, and get those muscles moving.

After a few years of temporary pickleball courts, which needed constant setting up and tearing down, it was finished in late July and is here to stay.

The project cost just shy of $20,000 and was part of the city’s capital improvement plan for court resurfacing this year, said Parks and Recreation Director Marshall Grange.

Perhaps surprisingly, preserved cucumbers aren’t part of the sport, though food terms like "falafel" (a shot that falls short) and "kitchen" (the non-volley zone) are.

It’s sort of a combination of tennis, table tennis, and badminton.

Two or four players use solid paddles (not racquets, which use strings) to hit a holed, polymer ball. Pickleball courts are significantly smaller than tennis courts, and the rules are different.

USA Pickleball says the sport was invented by a few dads in the 1960s on an island off Washington state’s coast. One of the founders allegedly had a dog named Pickles, and there you have it: Pickleball.

Players and organizations alike say the sport has only grown in popularity these past few decades. Even at Lions Park, the then-tennis courts became a spot for picklers to play.

“More and more, we saw pickleball being much more preferred over tennis,” Grange said of the courts.

After July 2016 at Lions Park, recreation staff would put up temporary pickleball nets at the tennis courts.

After some time, staff decided to put storage bins out there and gave the access code to a player to set it up themselves. Staff say the two permanent tennis courts weren’t getting used much, but the temporary pickleball ones were. Some days, five or all six of the courts are in use.

So when some devoted players, active mostly in the mornings, advocated for some pickleball-only courts, the answer seemed obvious. New courts it was.

Originally, Grange said the department wanted 10 pickleball courts to host future tournaments and clinics. Because of COVID and the accompanying iffy economy, six was the final number.

The timing almost couldn’t have been better.

Though the new courts came in as summer winded down, they almost replaced Chaska’s indoor courts, which aren’t currently available.

To keep the Community Center safer with COVID, staff moved exercise equipment to the pickleball space. As of now, the only place to play in the city is Lions Park.

A smaller court means less ground to chase a ball after — and that ball is less bouncy, giving players more control over their shots.

“That’s why it’s so great for all ages,” Link said.

Grange said pickleball has picked up with families and children and is even a part of some physical education programs now. Players call the sport easy to learn and great for older adults, too, especially in non-pandemic times.

“I think it’s huge for our older adult population to have sort of a sense of identity here in Chaska, for their social group to be able to play,” he said.

Some even came together every morning and would go out for coffee afterward.

The Kuntz family can speak to this.

Though they only started playing this summer, it was Carisa’s 89-year-old mother who got the family interested.

Patt Johnson played pickleball for the first time at the Chaska Community Center a year or so ago. She took the game back to her home in Pipestone and helped make courts out there.

“So we got paddles for the entire family,” Kuntz said.

The family of five takes turns playing the game, yelling, “Get that!” or, “No, that was in! It counts!” a few nights a week.

“It’s just enjoyable and you can be as competitive as you want,” he said.

“It just gave us something that we could all do and have fun and be outside, and it’s just really brought our family together during this time,” Kuntz said.

It brought other Chaskans together, too.

Jon Dobias and Heather Vikla moved from Shakopee to Chaska this summer. The couple bought a townhouse close to Lions Park, so on their frequent walks they soon noticed the new courts.

“That was a pleasant surprise,” Dobias said. “That was not the reason we moved to Chaska, but we’ll take it.”

The two bought a starter pickleball kit and now have three or so built-in date nights each week.

Recreation Manager Erin Link said though the new space is outside, there are ways to make play even safer.

People need to bring their own paddles and balls, and try to play with people who live in their homes. If that’s not possible, Link said to keep groups smaller by playing singles games, not doubles.

Since there are six courts, people can spread out and try not to play in the nearest court to one another. Courts aren’t sanitized, so people should bring hand sanitizer to use before and after games.

“All of these things are kind of our hopes that people are following and being safe,” Link said, though staff aren’t patrolling.

Staff also ask picklers to not play if sick, not share equipment, and avoid making physical contact with other players like high-fiving or hand-shaking. Wearing a face mask when not playing is also recommended, as well as avoiding socializing after games.

Lastly, if a pickleball comes toward you from another court, staff ask people to kick it back or use a paddle to return it instead of picking it up with your hands.

Recreation staff have a roster of frequent pickleball players to send safety information like this to, Link said.

Dobias said he’s happy to see pickleball courts outside, but once winter hits that won’t be an option.

He hasn’t been to the Chaska Community Center yet, but wants to check it out if staff add courts to the upper gym this fall. He's optimistic of its safety.

Also in the potentially-near future, Grange said, is a revamp of the Lions Park shelter building. It could be a finishing touch to a park that’s on the up and up.

“(The new courts) are another amenity that I think really has revitalized Lions Park in general. It kind of adds on to some of the energy that we’ve gained over there with the off-leash dog areas,” Grange said.

Now, picklers can put that energy somewhere else when they stop by the park: In their calves, shoulders, and maybe the stomach for a good belly laugh or two.