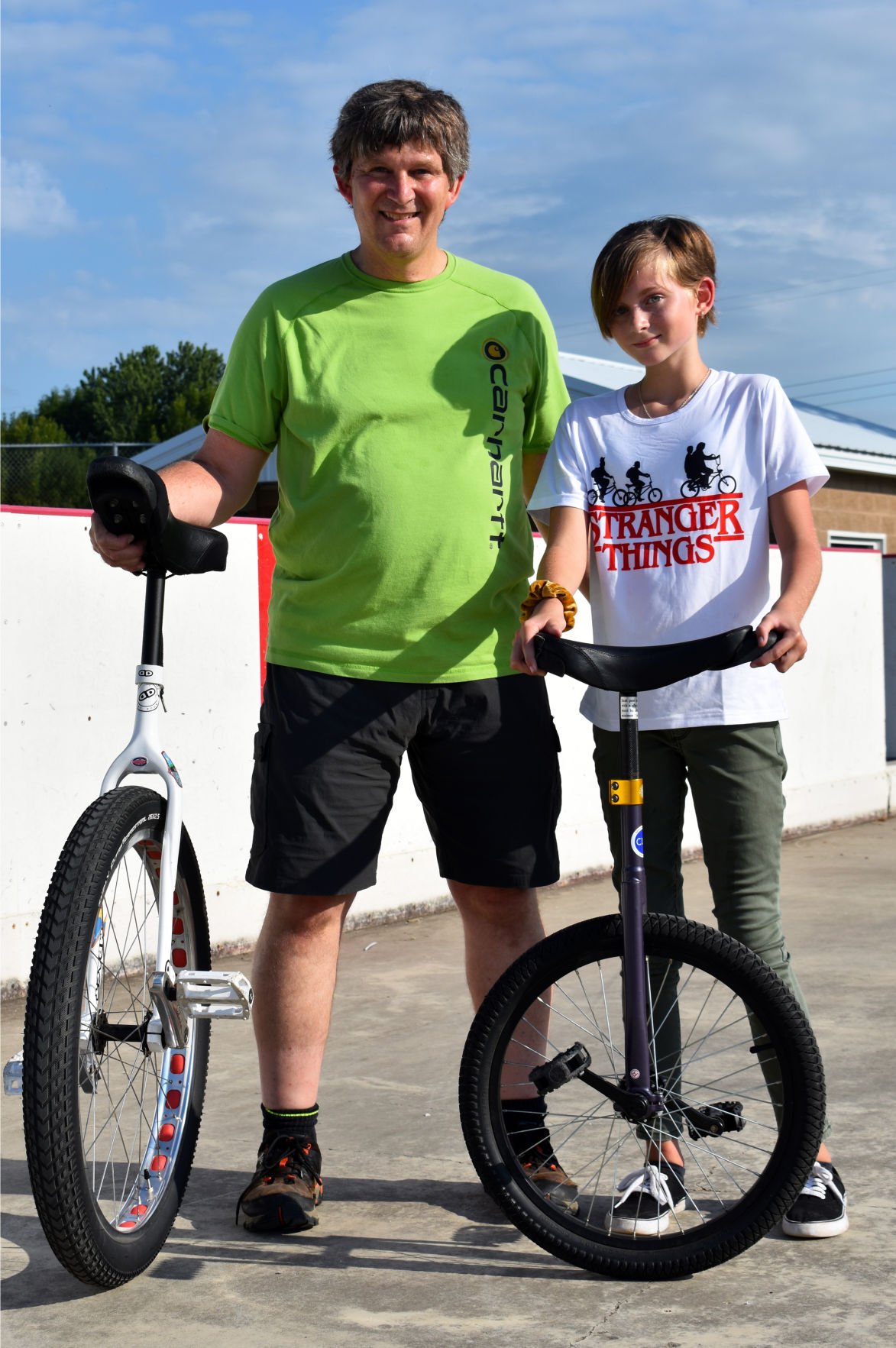 Jim and Maren Russell, dad and daughter, pose with their unicycles at the Carver Community Park ice rink where they go to practice. 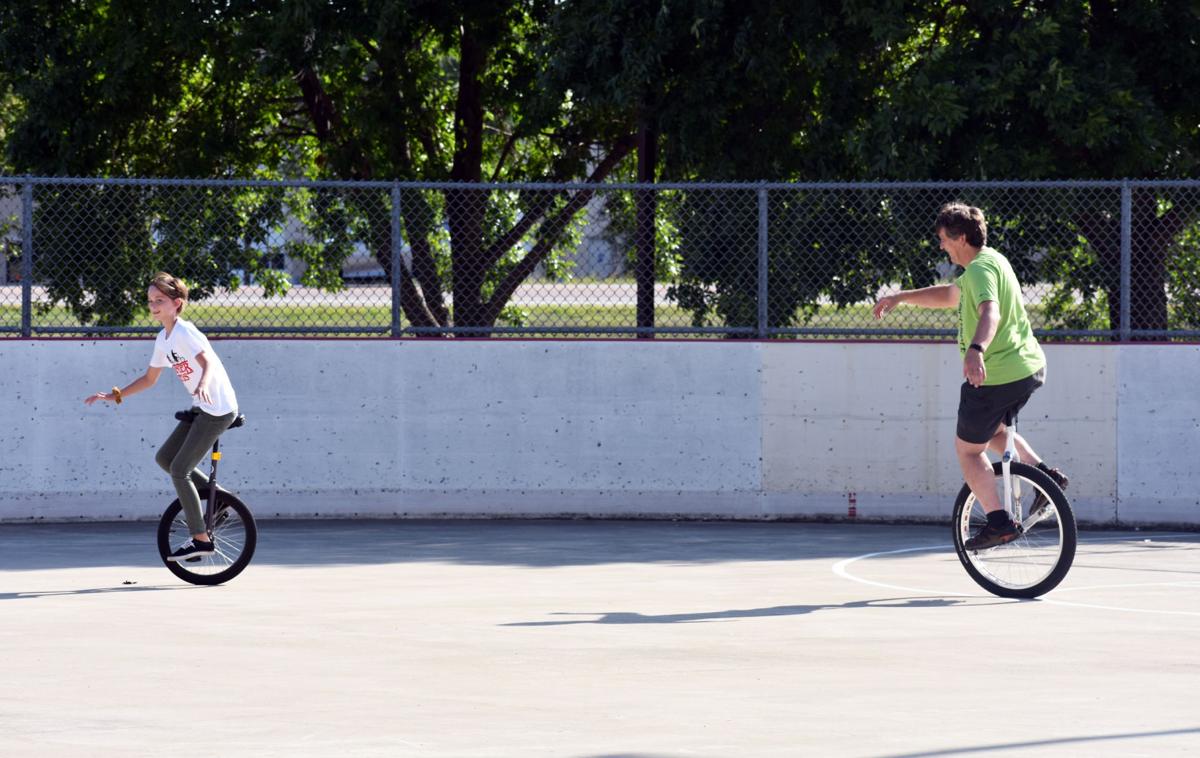 Jim Russell tries to catch up with his daughter, Maren, around the rink. 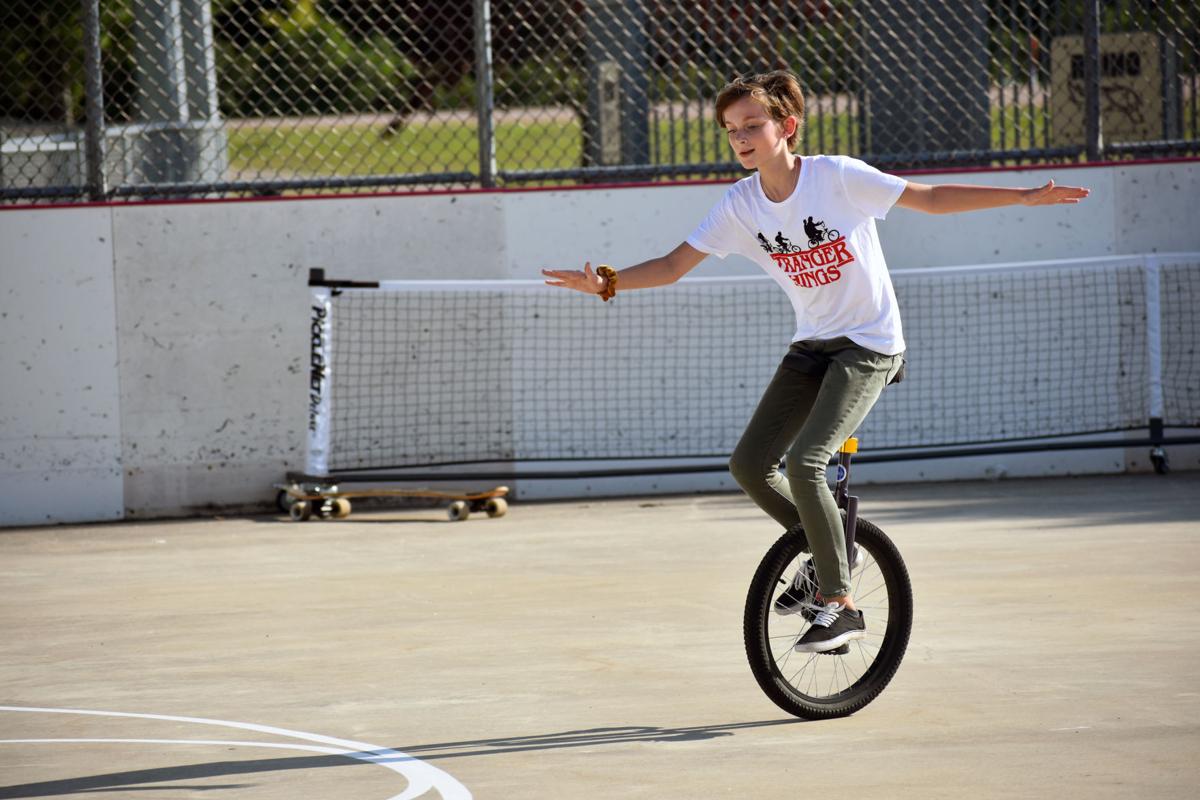 Maren Russell, 12, has been unicycling for about a year now.

Jim and Maren Russell, dad and daughter, pose with their unicycles at the Carver Community Park ice rink where they go to practice.

Jim Russell tries to catch up with his daughter, Maren, around the rink.

Maren Russell, 12, has been unicycling for about a year now.

One summer day last year, Maren Russell’s dad asked her if she wanted to go to the park.

It’s a straightforward question for most families, who’d probably expect to swing or play on the monkey bars. But the Carver family had something else in mind: Teaching her to unicycle.

“I think she said, ‘(I’m) bored,’” remembered her dad, Jim. “And I told her, ‘On a beautiful day like this, when you don’t have anything holding you back, you better go find something fun and not be bored and go do it.’”

In the beginning, it wasn’t so easy. The 12-year-old used the skating rink wall at the Carver Community Park, or Jim would hold her hand for guidance. At first? Frustration kicked in. But then, so did strength of will.

She kept trying and trying, and eventually made it across the rink. Then, a little further. The Pioneer Ridge Middle School student has been at it for a year now and is able to glide around at length.

FROM TWO WHEELS TO ONE

Unicycling is thought to be substantially harder than riding a bicycle. There’s usually only one gear, and you must constantly pedal to stay moving. It’s a recipe made of balancing and muscle memory.

Jim first learned to unicycle two years ago. He moved to Carver to be near the river and woods, and found biking to be his workout of choice. But he’d soon trade it in for something with half as many wheels.

“One time, I was leaving the neighborhood and I saw a kid riding on a unicycle out of the woods,” Jim said, recalling the sighting from two years ago. “I thought, ‘OK, that’s cool. I’ve got to get a unicycle.’”

Onto Craigslist he went, where a $20 unicycle awaited.

He started using the chain-link fence at a nearby softball field for balance. Soon, the low price tag made sense. After about a week, his new not-so-reliable transportation broke and he gave it up for six months or so before buying another one.

This time, he was all in.

Jim joined a unicycle club in the Twin Cities where he could practice in an indoor gym with instructors. He’d go to the club, which Maren is also a part of, a couple of times a week to improve.

Now, he rides a few times a week from his house to Winkel Park in Chaska, which is close to 10 miles round-trip.

To Jim, unicycling is a great way to exercise, since running gives him asthma. And when his daughter was in a tough spot mentally last year, unicycling helped bring her out of it.

It makes sure both of their brains and bodies are in shape. That keeps them rolling, and so does connection — with each other and strangers.

Practicing at the park together or riding to a nearby gas station a few times is the most the two have done together, but once club parades are back they’ll be busier.

The father-daughter duo is used to ogling strangers, who usually either have a puzzled or amused look on their faces.

“When you’re on a unicycle, you’re kind of a performer, whether you want to be or not,” Jim said. “You can’t fade into the background very well.”

Some people will stop to giggle; kids will show excitement to see you. Jim’s favorite?

“When people cheer,” he said.

Though he said it’s “technically not very hard,” it feels good to get encouragement.

Plus, unicycling opened up another world for Jim and Maren. On a recent trip to Alaska, room in the luggage was made for a unicycle.

“Hey, I got to see a moose while riding a unicycle,” he said.

For those wanting to learn, Jim offers some tips.

Get a lot of practice sessions in, but don’t overdo it at first. And each time, try to mount the unicycle without help from a wall.

Another suggestion? Get shin guards — they’re not limited to soccer players. It can help avoid injury when falling on a not-so-soft pedal, he said.

Fear of falling can dissuade some people from trying the sport, but Jim said he’s only really fallen a few times this summer. The rest is what he likes to call an “unplanned dismount.”

Technical aspects aside, the best tip he ever got was from a unicycling friend: Most anybody can unicycle. But you can’t be on the fence.