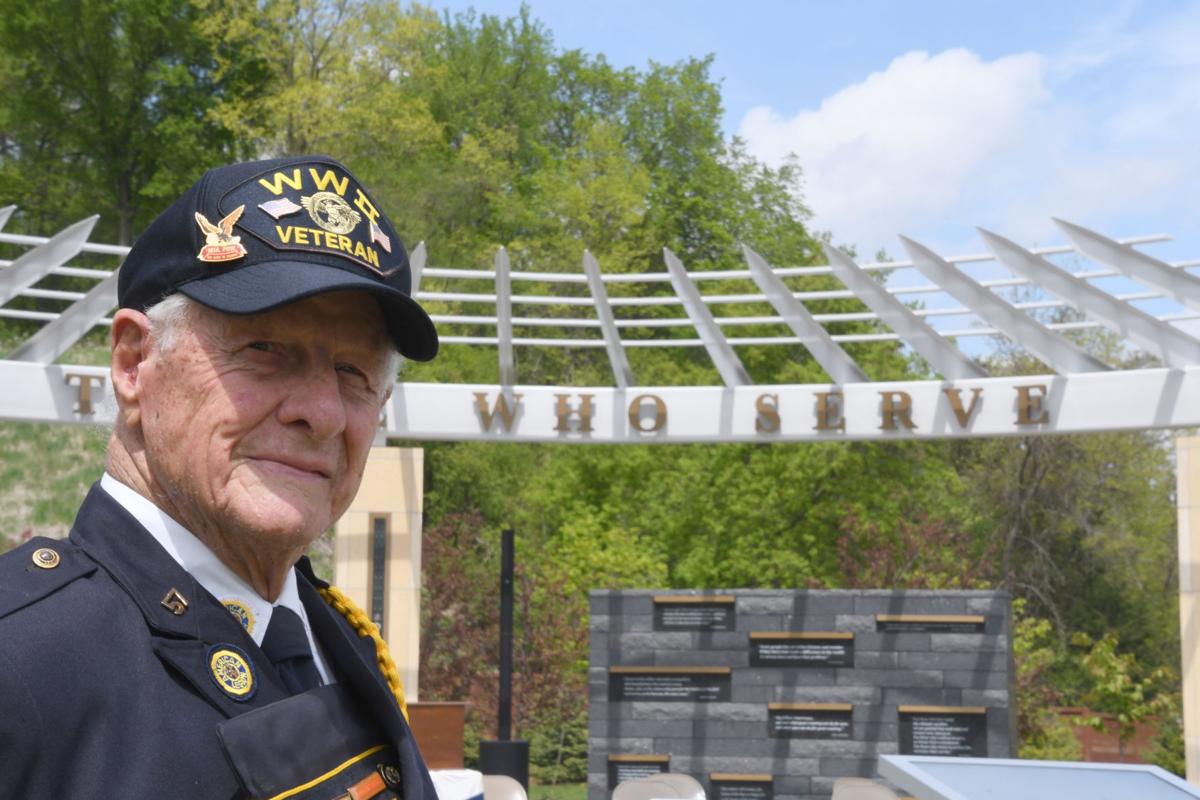 Eugene “Gene” Meuwissen, participating in a Memorial Day service held earlier this year at Chaska’s Veterans Park, stands in front of the words “In honor of those who serve.” 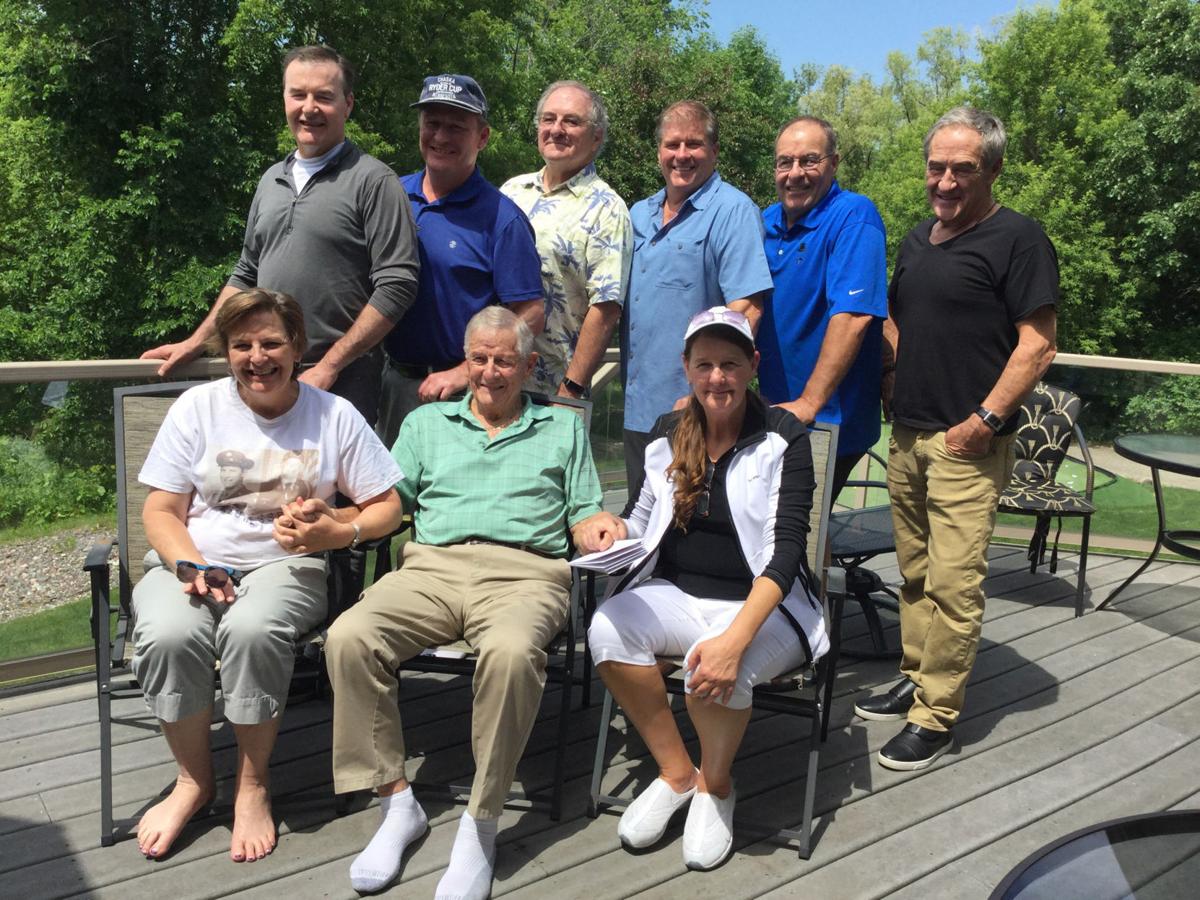 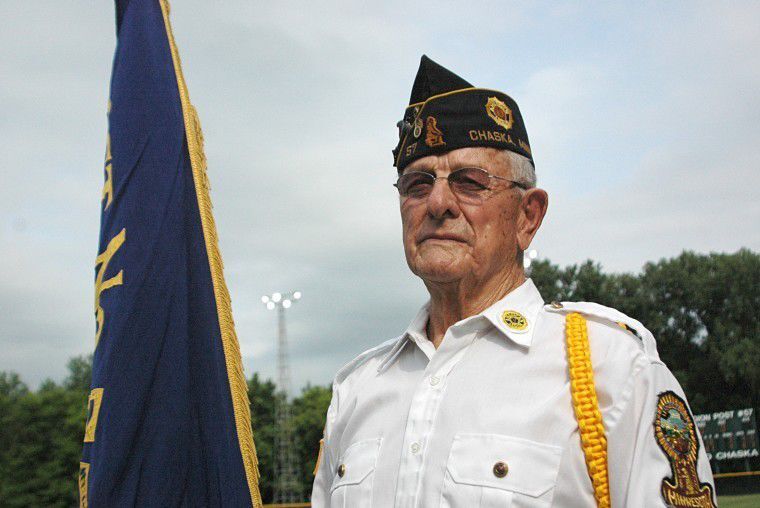 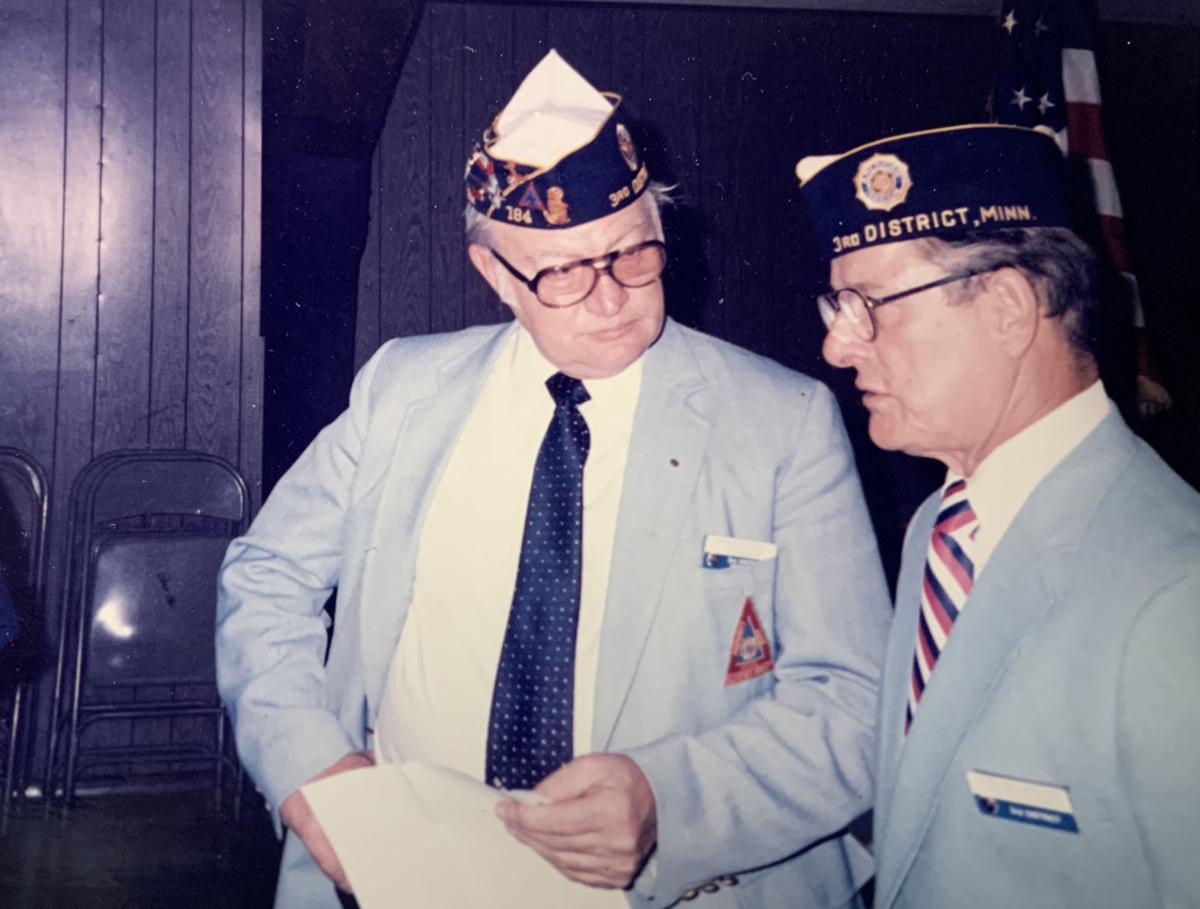 Gene Meuwissen, right, was involved with the Chaska American Legion for decades in many roles.

Eugene “Gene” Meuwissen, participating in a Memorial Day service held earlier this year at Chaska’s Veterans Park, stands in front of the words “In honor of those who serve.”

Bring back a baseball and in return, she’d get a dime.

It’s a fond memory Judeen Becker remembers of her late father, Eugene “Gene” Meuwissen, when he’d take her and her siblings to Chaska Cubs games. He was the scorekeeper for over three decades, doing what he loved: Baseball; with who he loved: His 10 children.

That’s just one of the titles Meuwissen (nicknamed “Gene” and “Geno”) held in Chaska, where he lived all 97 years of his life.

“He was a man not looking for any glory in the deeds that he did. He was very humble. He didn’t look for any praise. He was just doing it because ‘service above self,’” Becker said.

That service perhaps first started when Meuwissen joined the U.S. Army during World War II, stationed in Europe from 1943 to 1946. He served in amphibious, medical, infantry and armored units.

When he returned home, his commitment didn’t falter.

Meuwissen was a life member of the American Legion Post 57 and Chaska VFW Post 1791, holding many positions at the Legion. It was his calling.

Meuwissen was the Legion, those who knew him say.

“He was always present there,” Becker says. “His commitment to serving veterans was top priority. I mean, just everything about Chaska.”

Dorothy and Dick Wermerskirchen, both with longtime involvement at the Legion, say he was “instrumental” there.

“He just really was the backbone. I don’t know that if it weren’t for all the volunteers and Gene (as) the head of it, the Legion would bewhere it is today,” Dick says.

At 90, Meuwissen was chosen to raise the flag ahead of a Target Field Twins-Yankees game, an honor exclusively for veterans.

"How many 97-year-old men do you know that go out and put their uniform on and go to funerals and stand guard by the casket or go out to the cemetery (with) all the flags and stand there in line?”

Until close to his Nov. 8 death, Meuwissen would march in the local Memorial Day parade (his favorite veterans holiday), attend Military Funeral Honors and count the Legion’s money daily.

When Meuwissen took off for Arizona in the winters he’d still call to check in on Dorothy, who would take over counting duties.

“The Legion was one of the biggest parts of his life besides his family. He was there every day for lots of hours,” Dorothy says.

Steve NaSalle, the Legion’s 3rd District vice commander, called Meuwissen one of his best friends and a father figure, though far enough apart in age to be grandfather and grandson.

NaSalle gave Meuwissen an honorable 75-year certificate for his tenure at the Legion. Seventy-five straight years, he said.

“You usually see 50s and 60s, but when you start to get to 75? That’s pretty rare,” NaSalle says. “How many 97-year-old men do you know that go out and put their uniform on and go to funerals and stand guard by the casket or go out to the cemetery (with) all the flags and stand there in line?”

Meuwissen would give advice on how to be an effective commander; how to direct the Legion from a new perspective. As soon as a new or soon-to-be member walked into the building, he was there.

“He was just that person that you could look up to and it was like you’d respect him immediately,” Nasalle says. “He always gave off this friendly vibe but a commanding presence. Those are rarities that you rarely see today.”

Say “Gene Meuwissen” and throughout the district and even state, people’s ears rang with familiarity. People knew Meuwissen. And if they didn’t, they knew of him, NaSalle says.

That influence stretched into Chaska’s many other organizations.

Through his life he attended more than 30 national veterans conventions and earned the George C. Klein Award in 1986 for community service, honoring his time with organizations around town, including the Scouts.

On Sundays, Meuwissen would still drive to Guardian Angels Catholic Church, the same school system he graduated from.

He was part of Knights of Columbus, a religious men’s group through the church. The main cook for church (and Legion) dinners, he’d prepare his specialty spaghetti: Broken-up hamburger into the pasta instead of meatballs.

“I almost got in trouble. I told him it was better than my wife’s,” says Legion Adjutant Steve Nelson, laughing.

Meuwissen was bar manager at the Legion for over half a century and bartended at Butch’s Restaurant & Tavern and Cy’s Bar and Grill.

He was also seen at Cubs games, working with the park board and scorekeeping. Bob Roepke, chairman of the Cubs board, remembers Meuwissen first for this role until the Legion became first and foremost.

“He was a dedicated scorekeeper,” Roepke says. “He was probably at every game.”

He’d sit on the bench, observing and critiquing.

Meuwissen was the third of nine children, and went on to have 10 of his own with his first wife Rose. He was one of seven brothers, and he had seven sons.

He worked at Continental Machines as a sheet metal shop supervisor, returning home after a long day to be a “gentle and caring” dad, Becker says.

Both her parents were involved at the Legion, and there’s even a Rose Room there named after her mother.

Meuwissen was the provider, she says, and his family didn’t take that for granted.

“We were proud of him doing that on what he earned to put food on the table and raise us the best possible way he could,” Becker says.

When hard times hit the family or the news, Meuwissen would respond with a simple comment: “Whatever works.”

“And that’s how he would just not get anxiety and worked up over politics or whatever. Just, ‘Whatever works,’” Becker says. “His motto was, ‘Why argue? No one wins.’”

Meuwissen lived with his daughter for the past 15 months, stopping to visit family and friends on their driveways, playing cards, and watching westerns. Sometimes the two would head to the grocery store, Meuwissen saying, “I gotta get some steps in. Get me out of this chair,” Becker says.

Meuwissen’s younger brother, Vince, says they’d see each other on weekends or holidays, since Vince lived out of town. But growing up, they were closer.

“We were brothers. I guess we have a good time and we have a bad time. We were always doing something — swimming or fishing or ice skating, you name it,” says Vince, 93.

Becker says her dad will be remembered for stepping up.

He was a presence, whether at home or church, even the city and country, she says.

“I don’t think anybody in Chaska, if you spoke to him, they would not have anything to say that ‘Gene Meuwissen didn’t do this; didn’t do that,’” Becker says. “They’d always say, ‘Yeah he was always volunteering to take on every responsibility. He was always there.’”