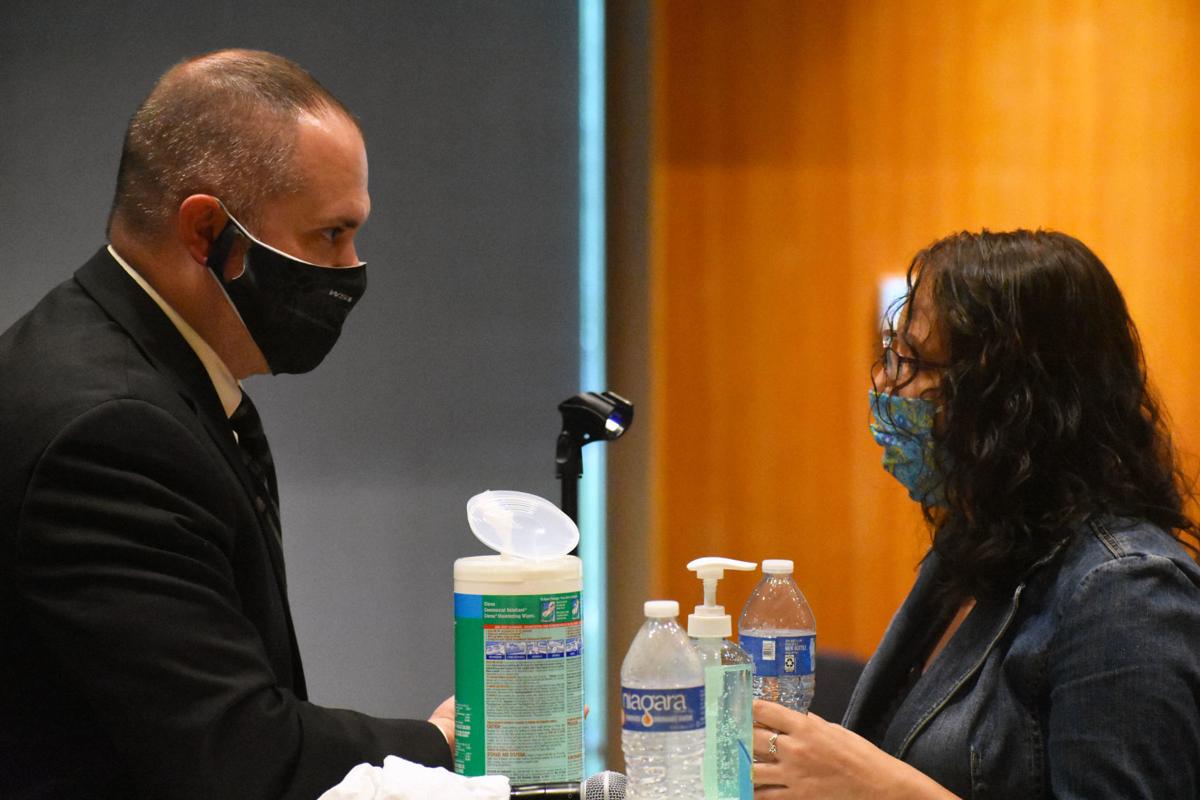 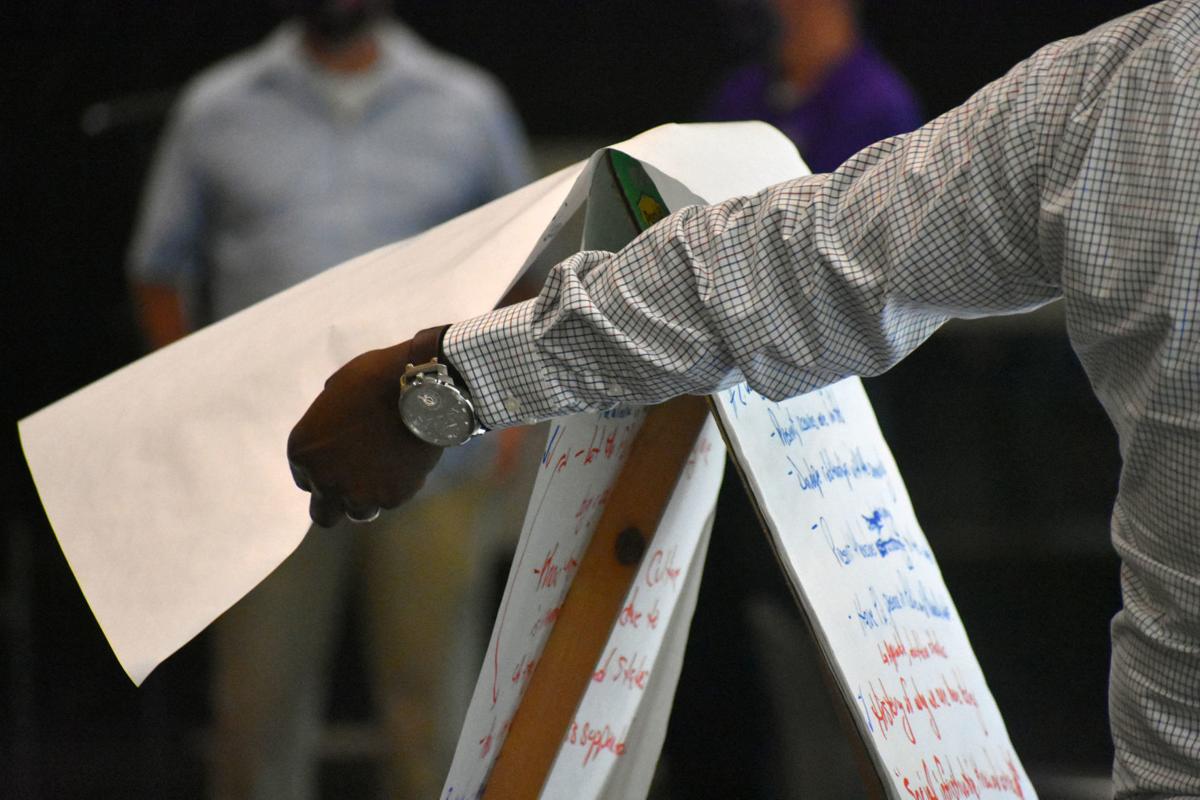 A YMCA facilitator turned one of several large notepads during the one-hour conversation period at the Chaska Event Center on Wednesday, June 24. 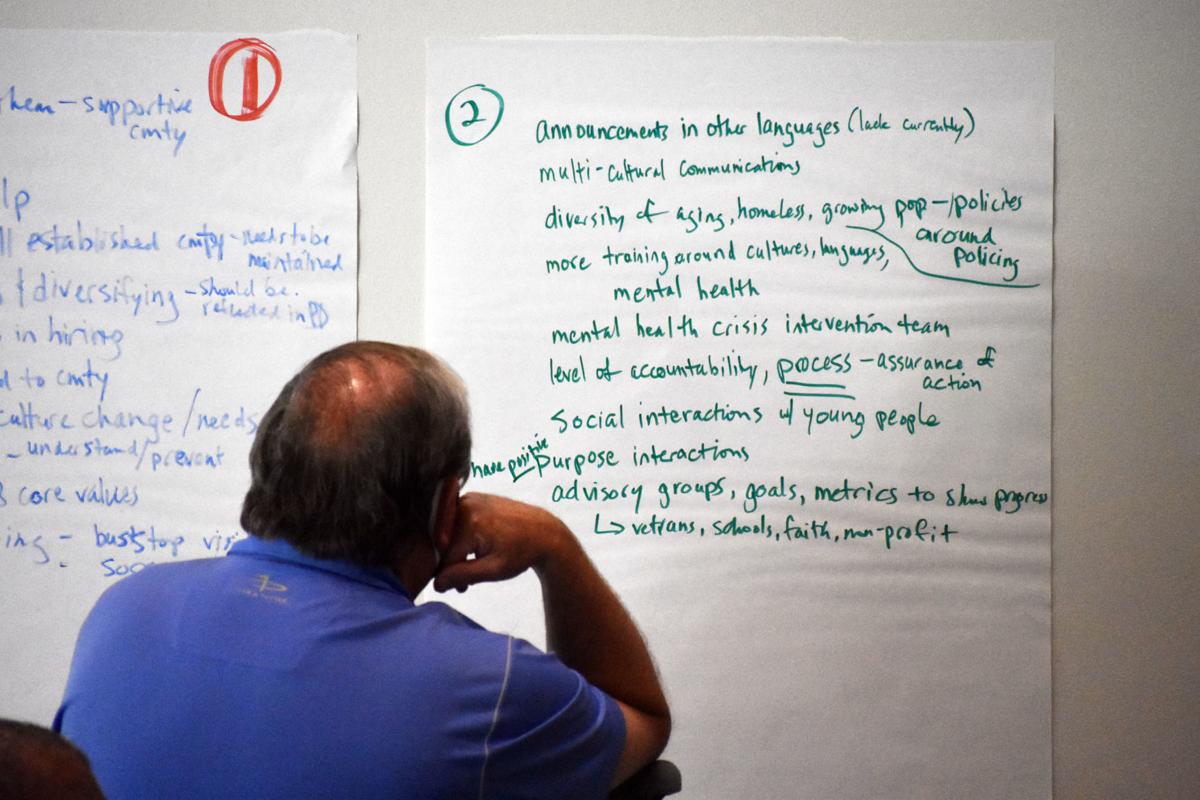 Chaska Mayor Mark Windschitl pauses to read notes from neighbors during the discussion. 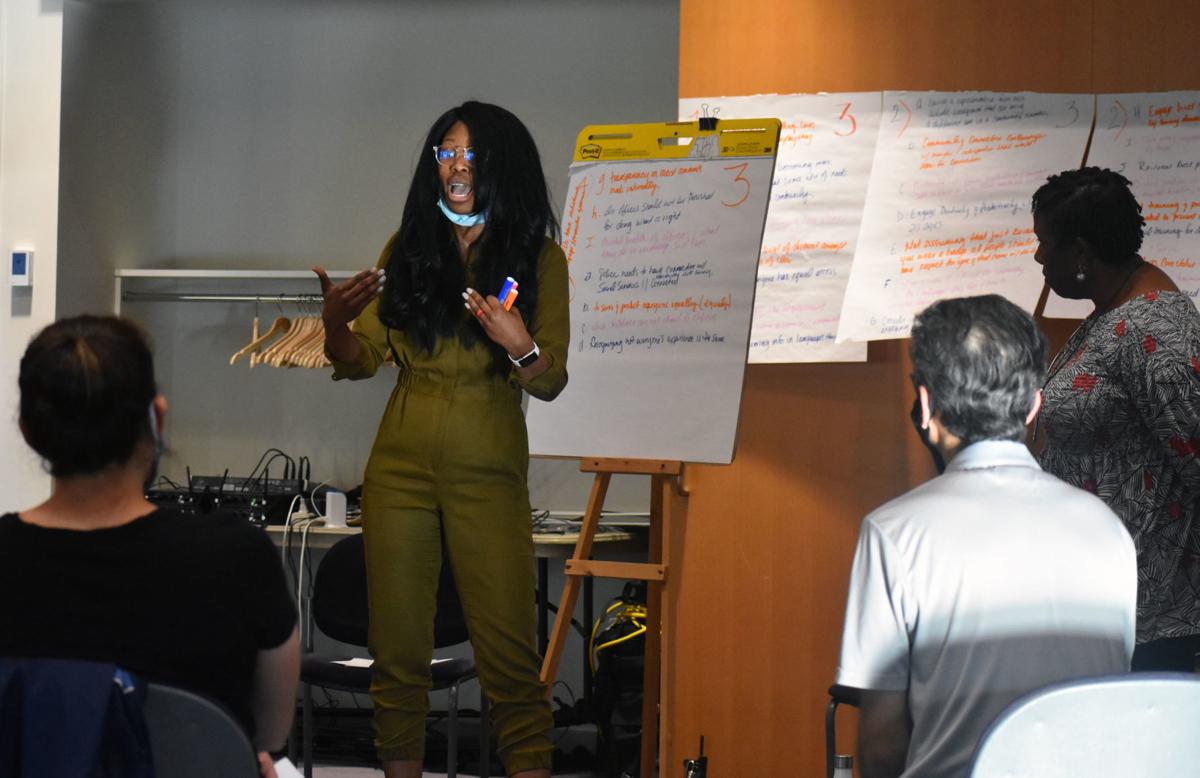 A YMCA facilitator turned one of several large notepads during the one-hour conversation period at the Chaska Event Center on Wednesday, June 24.

Chaska Mayor Mark Windschitl pauses to read notes from neighbors during the discussion.

It was a simple prompt for a complicated Wednesday-night discussion: Policing.

Around 50 people checked in at the event center last week for the Chaska Community Conversation on police practices in the city.

Each group’s dozen or so chairs formed a circle, with water bottles and written talking points near each seat. Large Post-it easels awaited ideas.

The gathering came a month after George Floyd died while in the custody of Minneapolis police, sparking public outcry, conversations and administrative changes across the world.

“Following that tragedy, though, there’s been a renewed focus on the policies and procedures across the country,” Chaska Mayor Mark Windschitl said.

“Tonight we’ll look at our public safety services in our community and we want to have an open and honest conversation. We want this to be a comfortable setting and we want to listen and learn from you and all of your experiences.”

A week prior to the event, new Chaska Police Chief Ryan Seibert published a public report with the department’s current policing and training policies, available on the city’s website. It was meant to be a starting point for Wednesday’s conversation, where people had to wear masks and participation was limited.

Registration maxed out, but not all who signed up attended. Officials said 47 people checked in.

“We are committed to meeting the needs of our community and we recognize that each member of our community may have different needs, values and perspectives,” Chief Seibert said. “We build public trust through the ways that we listen to and engage with and support.”

“There is no wrong answer or comment,” Lemar Walls said. “Listen, listen, listen. We want to be active listeners in this process.”

And with that, the conversation kicked off. The first prompt:

“What do you most want (the) Chaska Police Department to know?”

Groups wrote down responses to each question, pasting giant Post-it lists on the wall before moving to the next question: “What are some ways the Chaska PD can better connect with a more diverse population of our community?”

For an hour, facilitators walked groups through the five questions. At the end, the room came together to see what themes emerged.

FROM PEOPLE TO POLICE

After small-group discussions, with Chaska councilors in the groups, a microphone wrapped in a Clorox wipe made its way around the room.

People voiced the following: Set the standard for change in police departments. Engage the community. Be willing to say, “We were wrong,” and adjust accordingly.

Many people made it clear they supported the Chaska Police Department that night, despite calls for police abolition in the United States.

“You’re doing your job. Continue to do it. I think that’s a consensus among all groups,” said Chaska resident Dontá Hughes.

People offered suggestions, like having police learn new languages, address implicit bias, and hire more diverse officers. Some said a review board is needed to give police oversight; others said de-escalation techniques need to be revisited.

Police should understand there’s a level of law enforcement distrust in communities of color, others said.

“Not assuming that just because you have a badge that all people have respect for you,” read one of the lists.

Some said disrespect could be addressed by hiring police representatives from multiple cultures or sharing neighborhood meals with people of color.

“We don’t want to be barbecuing and get the police called on us,” Hughes said. “It’s time to focus on changing that narrative so we can show people how we come from racism to make each other better.”

How can the department best serve the community and what’s a priority?

It was another small-group prompt. Several themes made themselves apparent in the answers.

People wanted officers to live in the area, which Seibert said around 75% on the Chaska force do. They asked for racial profiling training and reinstating a medical app to help officers deal with calls related to vulnerable persons.

Other specifics made their way into the room, like training officers specifically on mental health situations or having professionals respond to those calls.

Onto another question: How could the department change?

Be transparent about policies, especially those unavailable unless requested or paid for. Find a way to have accountability for racist comments made internally and to protect those who stand up to them.

“An officer should not be punished for doing what is right,” Chaska City Councilor Taylor Hubbard read from Group Three’s idea list.

The department’s mission statement is concise.

“Simply to serve and protect,” Chief Seibert said. “And when I say ‘simply,’ two words makes that simple. But it means so much more.”

He said the department holds “life in the highest regard and we treat everyone with dignity and respect and we have a duty as a police agency to earn public trust through consistent words and actions.”

He went on to address other pillars of the department, like holding officers to “high professional standards,” setting goals, and accepting responsibility to be leaders both in and out of the police department.

The last group prompt asked what that short mission statement meant to Chaskans, and how the department could better fulfill it.

Others said police should consider all other options before use of force, ban chokeholds and neck restraints, and turn away from unnecessary stops.

Several Chaskans offered some recaps from the night, grateful for the conversation and hoping to see more change in the future.

Carl Lacey has lived in Chaska for the past 12 years. He went to the event and volunteered to speak on behalf of his small group, because it “was (his) duty to, as an interested citizen.”

“You can’t just remain on the sidelines when you have an opportunity to speak and participate, and perhaps help shape the narrative,” Lacey said. “You go from spectator to participant.”

He said he learned how his neighbors felt about police, and the night solidified his love for conversation.

“It’s good to chat. Openness is good. Discussion is always good, regardless of the situation,” he said.

Notably missing throughout the discussion were calls for abolishing police, which Lacey thinks “was an initial overreaction to another overreaction” from the nation.

He said he thinks people say “defund the police” as a call to examine budgets and re-allocate some of that to more constructive things like nonlethal tactics.

Lacey said he was proud of the city for building off its two Marnita’s Table events and furthering discussion around race in Chaska.

“The more open we are and the more we get to know each other, then the better it is all around,” Lacey said.

Other players in last week’s conversation were Mallory McKinney and Taylor Diles.

Among the youngest people there, in their mid-20s, the couple graduated from Chaska High School and have been in the city for many years. It’s an age disparity McKinney noted as “disappointing,” since much of the current social justice movement is led by younger people.

Diles said he wanted to learn about the department’s policies and hear from neighbors about their history with police.

“I don’t think either of us, in our extended time in Chaska, has had interactions with the police department. I wanted to hear more about what other residents’ experiences were, just to see where we’re at,” he said.

For McKinney, the night was a chance to see what police would do in the future.

“I was really curious to see what sort of active steps that the Chaska Police Department is going to take,” she said in a phone interview following the meeting, wondering about solid plans and incoming changes, “not just their ideas.”

She said they didn’t necessarily hear that, nor were officers present other than the chief and Deputy Chief Ben Anderson.

“A lot of the evening last night was spent talking about how community members (were) expressing how police officers should have more exposure to the community they were serving, yet they were noticeably absent outside of the chief speaking.”

She recognized how that was maybe purposeful to solely hear from the community, and that the night was just the start.

The mayor, police chief, and YMCA officer all said just that: This is the beginning.

“Our community is welcoming and safe for everyone, and as a council that’s our No. 1 priority. These types of community conversations are important steps for us to get closer to that goal,” Mayor Windschitl said.

“I want to make it clear that this is just step one of what I hope is a continued conversation with each of you and the rest of our community,” he said.

“My goal for tonight is to make sure, and will do everything possible to make sure, this is a comfortable and supportive environment for everybody just to make sure that you feel that you can voice your concerns and feedback that you might have,” he added.

On June 29, the City Council was scheduled to meet with the chief and deputy chief for a work session based on Seibert’s public report.

The following day, a similar community conversation through Zoom was scheduled for people who couldn’t attend the in-person meeting.

Now, Seibert said, is the time for an “internal review” and check-in with feedback from neighbors. He expects another event in the future explaining what changes the department has planned and why.

Seibert offered closing remarks, saying much of what was discussed resonated with a lot of his thinking.

“We can’t just take the blanketed approach to determine what we do as an agency. So I think the biggest key is to just continue this collaboration,” he said. “What can be done to keep the agency relevant; just taking a look at, again, how do we collaborate? How do we move forward?”

He said in his two months as chief, he’s already discovered the city’s police department to be assuredly “healthy and strong,” and said he’ll continue this conversation.

“Just making sure we have that very constructive and productive communication,” Seibert added.

For residents such as Lacey, this communication is essential.

“Let me hear you; you hear me. It can’t do anything but be productive in the end.”